Go for the animals and the soaps made from their milk 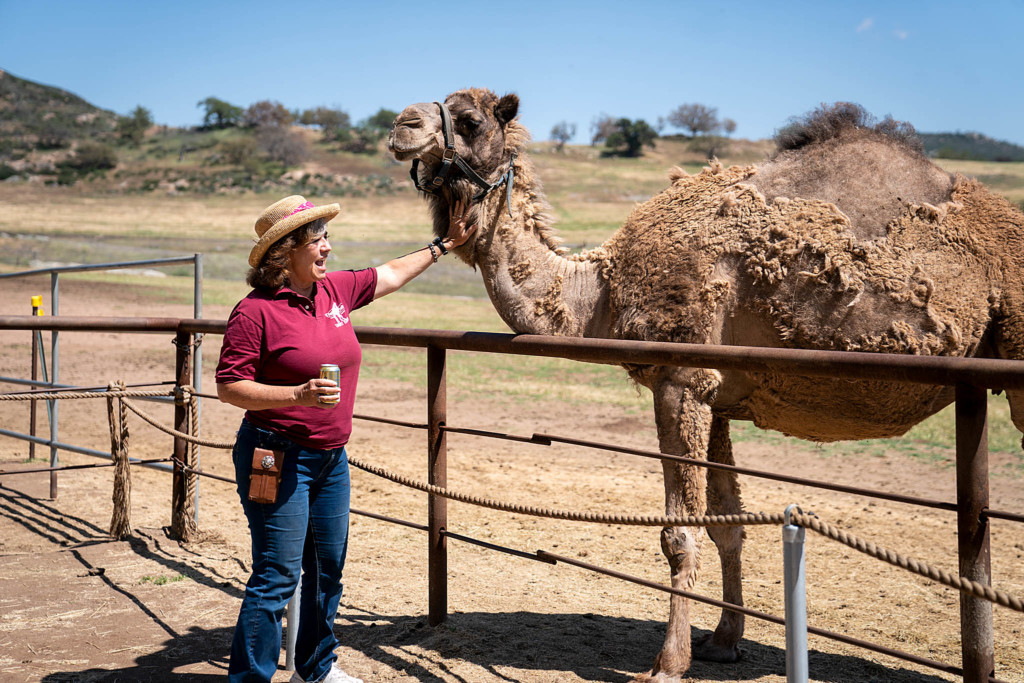 When Gil Riegler was just a kid conscripted into the Israeli army, part of his duty as a Bedouin tracker was to bring confiscated camels back to base and take care of them. He didn’t know anything about camels but he soon got the hang of it. In the process, he began to bond with them and discovered they are loving animals capable of showing affection.

Gil’s wife, Nancy, kept birds and trained them for shows at the San Diego Wild Animal Park (now the San Diego Zoo Safari Park) before she decided to go out on her own with a traveling bird act.

When she took her bird performance to the Santa Cruz County Fair, she happened upon Gil’s camel show and, like a fairytale with a happy ending, Gil and Nancy met, fell in love and got married. They also married the two shows as part of the educational entertainment at their Ramona Oasis Camel Dairy, which they opened in 2000. 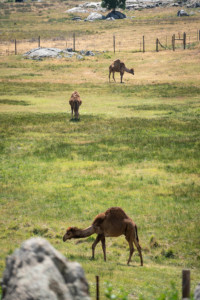 Nancy tells Gary and I these anecdotes as we sit at a picnic table on the more-than-34-acre property, waiting for Gil to finish a business call. I hear a sort of yelp coming from a pen in front of the picnic area as a bald baby turkey calls out to his mom.

Yes, there are turkeys—famous racing turkeys according to the company’s brochure—along with a handful of other farm animals and Nancy’s colorful parrots and talkative cockatoo. But let’s face it, the camels are what people come to see.

So, off we troupe to take a gander at them ourselves, starting at the 15-acre land pasture “where they have room to walk and get to live naturally as a herd,” Nancy says.

They’re friendly and seem responsive to my voice, although the one camel that I’m interacting with shows more interest in my legal pad and pen than me. But she bats her long eyelashes near my cheek and lets me stroke her neck.

Gil walks out to the field and a camel sprints from afar to see him. “She’s coming over just because she wants to be pet,” he says. Gil and the camel nuzzle together for a few minutes. Pretty soon, a mother and her three-week old join the scene. “That’s Lily and Aruna,” Nancy says. “He’s big and strong for his age.” 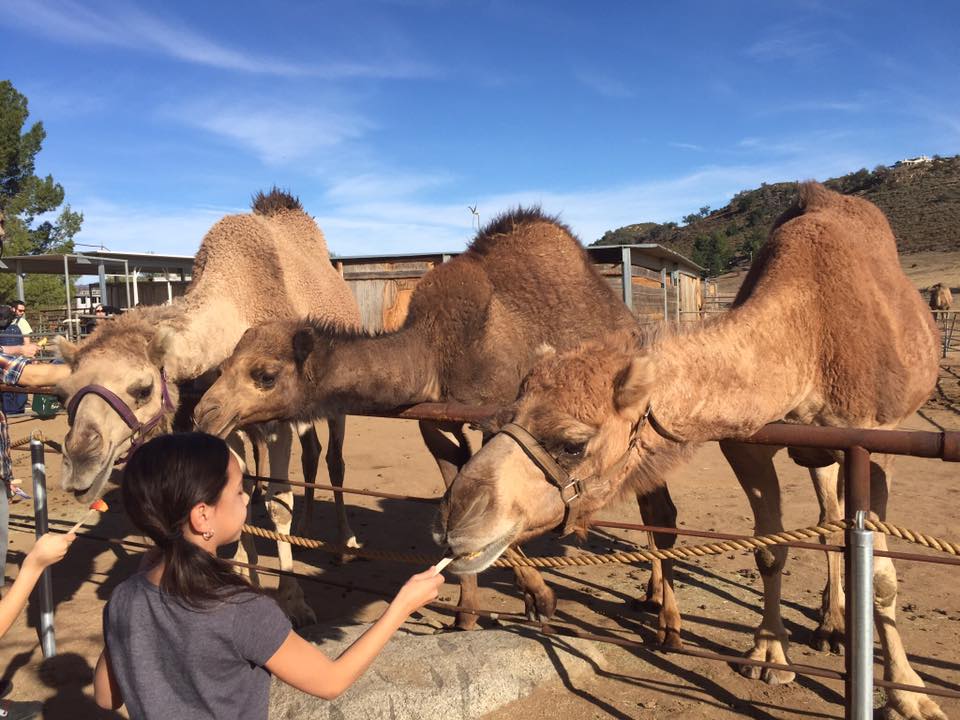 The baby camels are needed for milking, Nancy explains. Besides feeding the young ‘uns, the milk is used to make skincare products—lotions, soaps, bath bombs, lip balms—that they sell in the property store. “Gil formulates them and they are all-natural, made with plant-friendly and organic ingredients,” Nancy says.

We leave the field and head to another area to see if we can catch one of the male camels blopping out what’s supposed to look like a rose-colored foam.

“You’ll have to get your camera ready,” Nancy tells Gary “because it will only happen once.”

I picture my face getting sprayed with pink goo, but it’s not like that. When in rut the male camel takes a deep breath, closes his nostrils and blows wind into the palate from his trachea. The palate, which is a pinkish color and looks like a deflated balloon, protrudes for a few seconds. Today was not the day, however. The male expressed little interest in impressing the female trio next door to him. So, Gil gave him a couple of eucalyptus branches to munch on instead. Like giraffes, they are browsers, not grazers, we learn. 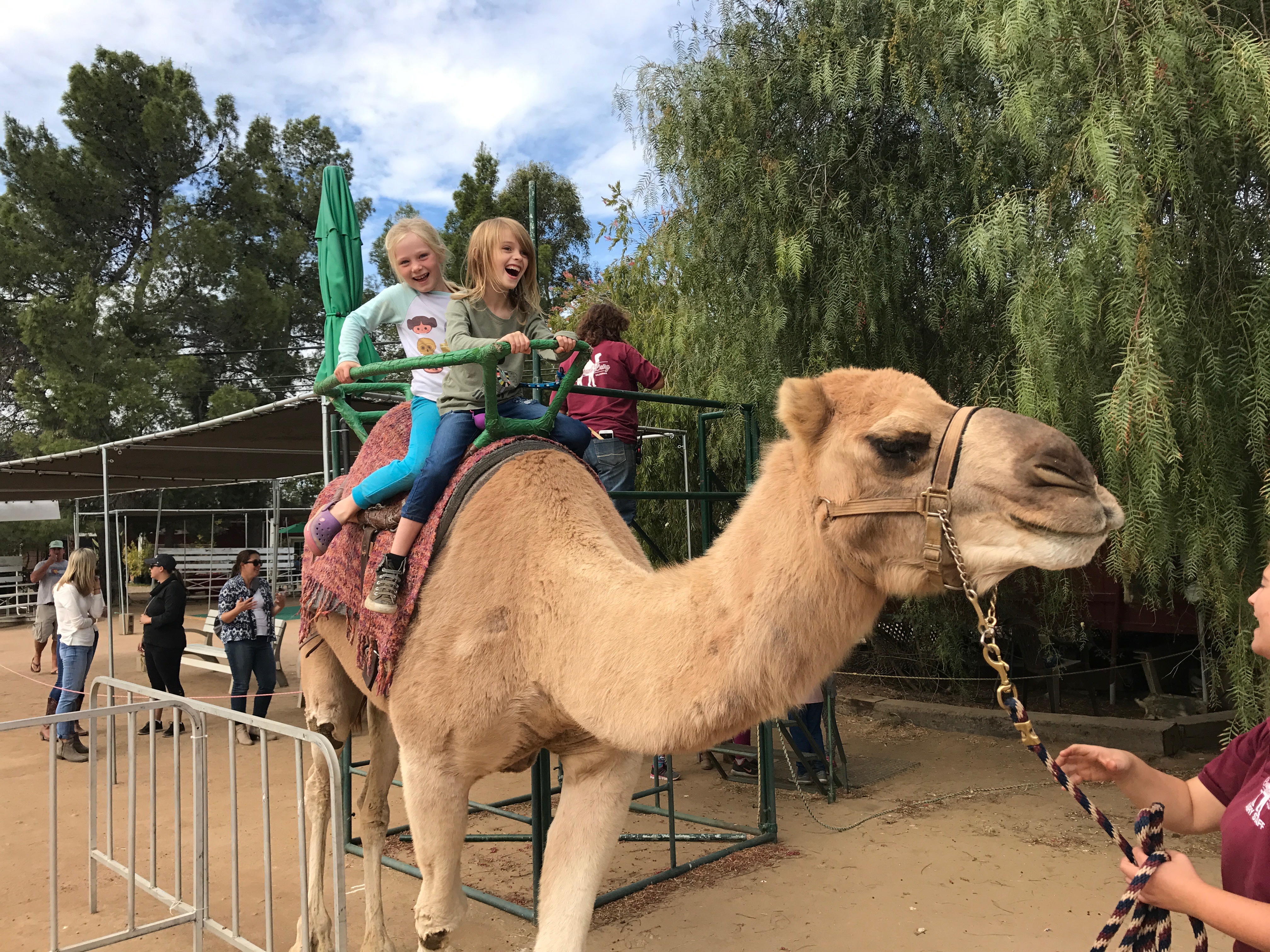 As we walk back toward the show and ride-a-camel areas, we pass a camel who looks a little wary. “Oh, he’s always looking at you sort of sideways, like he’s waiting for the other shoe to drop,” Nancy says. “He’s come a long way but he was badly treated and we rescued him.

“We just love our camels,” she adds, “and we are so happy when others want to see them and learn about them.”