A manor springs to life with stunning European charm 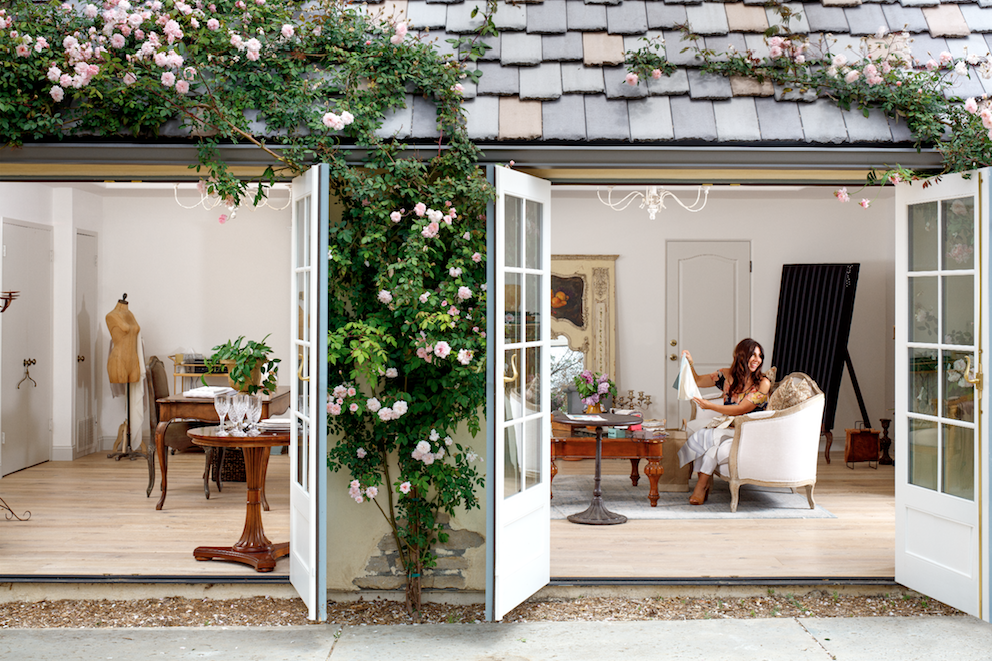 Dani and Kurt Blasena lived in their Rancho Santa Fe fixer upper home—the roof, a ramshackle of a structure peppered with holes and loosely covered by a tarp; the guests, occasional uninvited raccoons and an owl; the stove, a backyard fire pit good for cooking kabobs—for four long, miserable months. That was two years ago, when they closed on the house.

“I wouldn’t ever wish how we lived on my worst enemy,” says Dani, owner and creative director of Haute Fêtes wedding and event planning. “It was a nightmare. People don’t live in fixer uppers for a reason.” 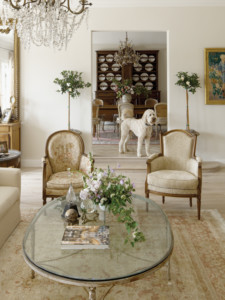 Two-year-old Milo (pronounced Mee-lo), the well-behaved but high-energy family goldendoodle stands in the doorway between the formal living and dining rooms—and totally steals the show.

The kids—Ryan, 23; Dylan, 17; Alex, 15; and Lucy, 15—chose to camp in tents in the backyard rather than sleep with the critters. They thought Dani and Kurt were nuts to sell the La Costa home that the blended family shared after the couple married in 2014.

“We did leave a beautiful ocean view, but we craved more greenery,” Dani says.

The couple spent nearly three years searching for the perfect piece of property to build on in the Ranch. They longed to live there because it felt more rural yet connected to everything. After putting in two offers on properties that ultimately didn’t pan out, Kurt finally stumbled upon this house on Zillow.

“It took some convincing to get Dani to agree to even look at it,” he says. “But I could see that the house sat on an amazing piece of property. When we walked in, our Realtor said, ‘Let’s get out of here!’”

But Kurt and Dani saw the potential and the opportunity to create their perfect home.

“I walked in and said, ‘I want that Trumeau mirror [an 18th-century French piece that was hanging in the entry], and I want this house,’” Dani says.

It turned out that the house belonged to Connie and Bill McNally, owners of The McNally Company Antiques, specialists in 17th- to 20th-century Spanish, Italian and French furnishings, paintings and objects. The McNallys, now friends with the Blasenas, purchased it with the intent to remodel. They started by gutting the kitchen but ultimately ended up halting the overwhelming project. 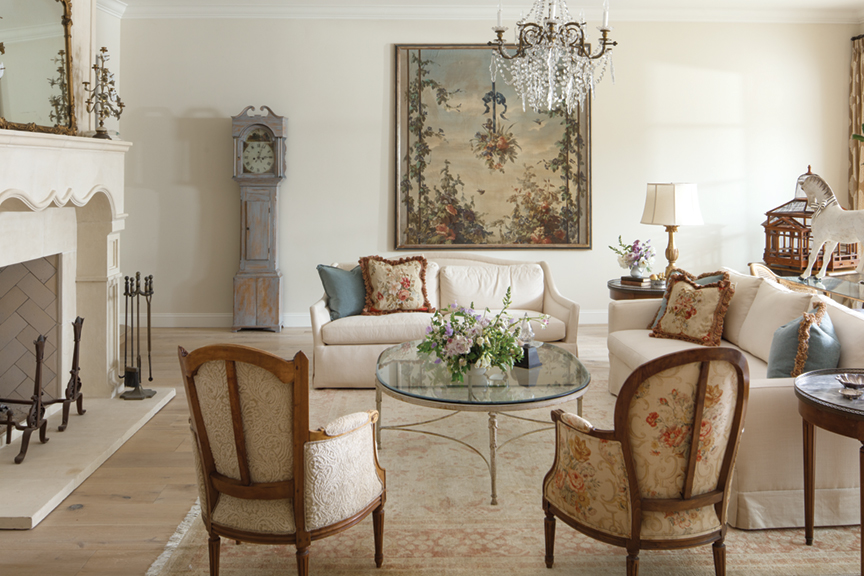 The formal living room epitomizes Dani’s talent for combining antique and antiqued. The painting and floral chair on the right are authentically 18th century; the other chair, grandfather clock and floral pillows are finds from consignment shops and estate sales.

Dani wasn’t going to let the immensity of the overhaul deter her. She saw that the home had good bones—plus, having studied art history in the United Kingdom, she recognized a nod to the Lillian Rice Spanish Colonial Revival-style architecture that she admired.

Before they could buy, however, they needed to secure a loan. Banks called the property a tear down and told Dani and Kurt they’d need to apply for a construction loan. “But that wasn’t going to work with our budget,” Dani explains.

In order to get a home loan, the house needed to be livable, meaning there had to be running toilets, flooring and a working kitchen. 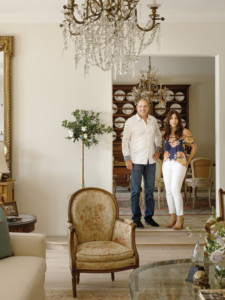 Kurt and Dani have the same taste in furnishings and enjoyed shopping together on weekends to find the pieces for their home.

They hired architect Dena Gillespie of Gillespie Custom Home Designs who, like Dani, embraces Lillian Rice style-architecture. By fast-tracking the kitchen and buying brown carpeting for every room, including the bathrooms (it was the cheapest floor covering they could get in large amounts), she helped Kurt and Dani obtain their loan.

Then the real work began. To make it look as though the exterior cladding had been there for 100 years or more, Dani and Kurt replaced the exterior wood siding on the 1974 house with white stucco, embedded here and there with rock. For an aged appearance, “like the old homes in Provence,” Dani says, the stucco appears to be crumbling away in spots, but it was all intentional.

After that, the couple literally peeled back the carpet and, going room by room, remodeled the 5,700-square-foot, five-bedroom, five-bathroom residence with the European aesthetic they loved.

That translated into a kitchen with open shelving instead of upper cabinets. To make the shelves, Dani repurposed the scaffolding planks the construction crews used while working on her home.

She chose environmentally friendly materials that she could use in different applications throughout the house. She selected French oak wide-plank floors for the main living areas and bedrooms and then used the same French oak in a parquet pattern in the dining room.

In the kitchen, she opted for concrete that resembles weathered terra cotta tiles; she used them in the mudroom too. Concrete blankets the laundry room/pantry as well, but here the tiles are laid in a herringbone motif to mimic bricks. 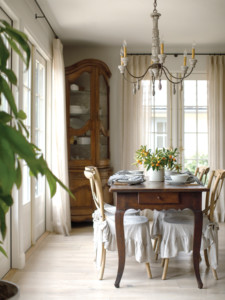 This welcoming breakfast room beckons you to sit for tea.

The couple kept the same footprint but had to replace 90 percent of the interior walls because of termite damage.

Dani loved that there were two defined wings to the home—one for living that encompasses the sitting room, kitchen, library, dining room; the other includes all the bedrooms. Dani and Kurt bumped the home’s entry out 186 square feet and hung two vintage doors, treasures Dani had been holding onto for years, to separate the two wings off the foyer. The formal living room, which anchors the two wings and sits in the center, “is really the heart of this home,” Dani says.

Before moving in, the couple rid themselves of the Spanish-style furnishings they had in the La Costa house and the beach-y vibe pieces from Dani’s Carmel Valley condo (which they also sold) and started with a fresh, French-inspired slate.

“I didn’t buy anything I didn’t love,” Dani says. “And I’d been collecting (or hoarding according to Kurt) mirrors, chandeliers, sconces and doors in our home in La Costa. But it was perfect because when we got here, I was able to find the perfect place for everything.” 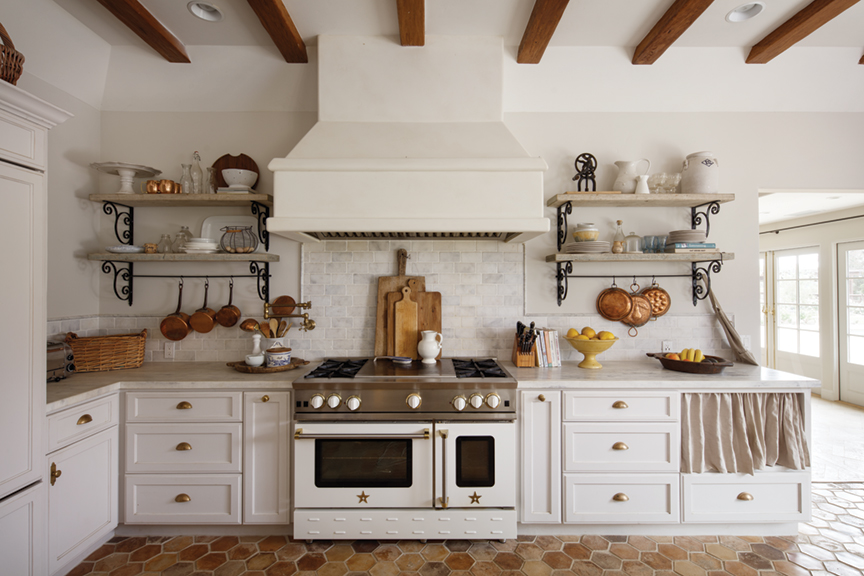 Salvaged scaffolding planks sit on top of iron brackets to create open shelves—an essential in a kitchen without upper cabinets.

“I love to pair the old with the new,” she says. “I love 18th-century pieces co-existing in the same space with a new consignment store find.” Dani’s also got an eye for pairing high-end antiques with second-hand counterparts that she has reupholstered, painted or reworked a bit.

“I’ve learned not to overlook ugly,” she explains. “Ugly ducklings can become swans with a little effort.”

For Dani, decorating takes a layered approach. She starts with a neutral palette—muted pinks and French blues mingle with ivories and sandy tones in her home—and a piece of inspiration. Maybe it’s a rug or amazing artwork. In the living room, for instance, the 18th-century painting done on silk that hangs behind the sofa served as the springboard for everything else she invited into the room.

In the guesthouse, which was once a potting shed, Dani let a table inspire her more rustic design choices. She turned the tiled table top into an inset in the kitchen backsplash (the base became the master bath’s vanity) and she found a long, bowed table at a consignment shop that made a beautiful kitchen table. 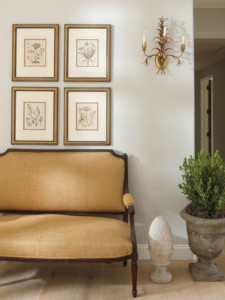 The burlap-covered settee in the foyer was originally a temporary placement, but Dani let it stay because she enjoys the way it pairs with the framed botanicals.

“I find inspiration in a bowl of fruit, a painting or a beautiful vignette,” Dani shares. “I never copy a design I see on Pinterest or Instagram, I let something I see drive the palette or overall feel.”

Dani also sought the advice and expertise of Tamara Palmer, owner and principal designer at Tamara Palmer Interior Design, who consulted with Dani on paint colors and fabrics and helped her think outside the box.

“Dani wanted casual but refined,” Tamara explains. “She has four teenagers and a dog. She didn’t want anything to have a showroom feel. She wanted it to look timeless and lived in but elegant.”

Tamara guided space planning and filled in the decorating gaps as well. Dani scored a sofa for the living room at a local consignment shop and tasked Tamara with finding its complement, which she did in the form of a camel-back couch from a to-the-trade-only company.

For the expansive gardens outside, Dani hired Shellene Mueller of Designs by Shellene to create a South of France landscape. Shellene moved the pool and redesigned it as a rectangle; planted olive and California pepper trees to grow near the existing lemon and orange groves; and created specific spaces to sit, barbecue, eat and hide away (there’s a privacy garden off Dani and Kurt’s master bedroom). 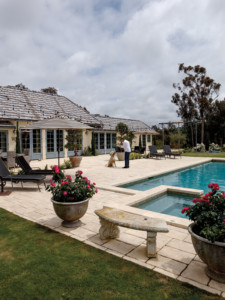 Twelve sets of French doors open the entire back of the house to the pool and gardens, where Milo loves to chase his ball.

For her part, Dani employed her preferred palette of purple, white and green in plants and blooms that include lavender, purple sage and ‘Cecile Brunner’ and David Austin roses, among others.

The edibles garden thrives in between the main house and Dani’s studio, where she meets with her brides and potential clients. Dani and Kurt both love to cook and grow zucchini, carrots, spinach, tomatoes, chard, potatoes, onions, peppers and herbs in these raised beds.

And the newest addition went in this past spring. Dani and Kurt planted a vineyard where a lemon orchard died. In three years, they’ll have 135 cases of syrah, “enough for us and Christmas gifts for friends and family,” Dani says. “That’s what this house is all about, sharing good times, happiness and the fruits of our labor with family and friends.” 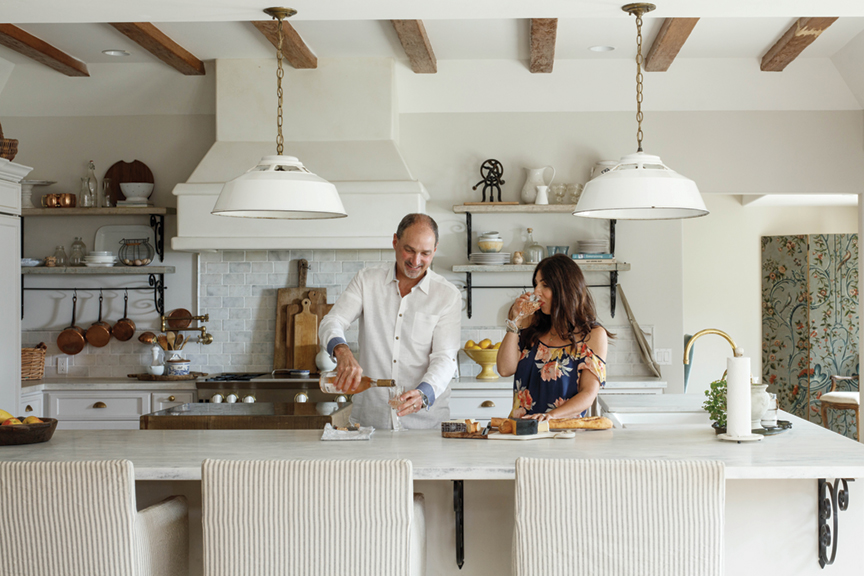 “That’s what this house is all about, sharing good times, happiness and the fruits of our labor with family and friends.”