A Water-wise Garden Blooms with Color All Year Long 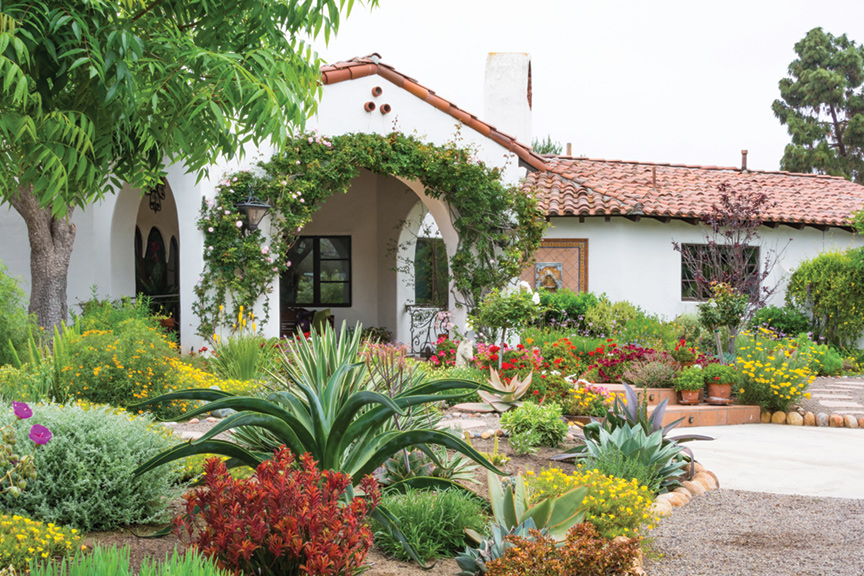 Gay Butler and Tom Montgomery created a colorful water-wise entry garden for their Spanish-style home in Rancho Santa Fe when they decided to replace thirsty lawn. A ‘Cecile Brunner’ rose clings to the arch outside the front door.

Best Use of Color. Who can resist the floral punch and hot hues in this exuberant designer landscape. Not us—especially when we discovered this Rancho Santa Fe lawn-gone makeover cut water use almost in half.

Drab desert vistas colored Gay Butler’s childhood in El Centro. So when she and her attorney husband Tom Montgomery bought a 4-acre horse property in Rancho Santa Fe 26 years ago, the interior designer and accomplished horsewoman knew what wouldn’t be in the garden there. “No cactus, no dry desert look,” she says. “I wanted color and flowers.” 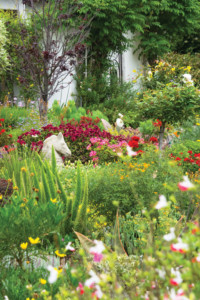 A floral tapestry of ‘Hot Lips’ sage, marguerite daisies, ruby geraniums, yellow daylilies and more. The horse sculpture was a birthday present from Tom to Gay, an accomplished horsewoman.

But first, the couple faced what became a two-year-long remodel of the 1950s-era ramshackle home nestled between pastureland and a horse barn, where access to the Ranch’s 55 miles of riding trails beckoned. Gay, who learned construction basics from her developer father, had served as contractor for the couple’s former home in Elfin Forest. “That’s why I was brave enough to take this on,” she says as they tore down the house and tiny kidney-shaped pool to create a single-level Spanish hacienda ringed with patios.

As the construction dragged on, the couple camped out in an apartment in the barn, also home to their cat, dog and then three show horses. “It was crazy,” she recalls. “We figured if we could survive this, we’d be married forever.”

Over the years, Gay and Tom greatly multiplied the number of trees around the property, mixing citrus and other fruit trees with Australian peppermint willows, redbuds, Chinese pistache and oaks. Bumper white nectarine and pomegranate crops are shared annually with the Del Mar restaurant Market.

What’s her secret for success with these often prickly plants? “I discovered roses love horse poop,” Gay says, with a hearty laugh.

For most of this time, though, the landscape was dominated by lawn, initially a verdant antidote to Gay’s desert days. But in the early 2010s, as drought deepened and their water bills soared, “we felt increasingly uncomfortable using that much water,” Gay says. “We had to make a change.”

An added path passes by hesperaloes, aloes and agaves that mingle with standard roses, sundrops, yarrow and other flowering perennials and shrubs that tolerate adobe soil.

In 2015, with deadlines looming for popular lawn removal rebate programs, Gay says, “We just jumped in and did it by the seat of our pants.”

Drawing on online resources, Gay’s design skills and visits to public and private gardens, the do-it-yourselfers solarized 6,000 square feet of turf and selected drought-tolerant replacement perennials and shrubs. One shopping spree to Briggs Tree Nursery netted 1,200 plants—more than 60 varieties—for the new garden, planted with the help of three gardeners.

Today, a new water-wise landscape ranging from exuberant borders to a stately parterre circles the home with sunny four-season color and bountiful blooms. “Plus our water use is down 40 percent,” Gay says. 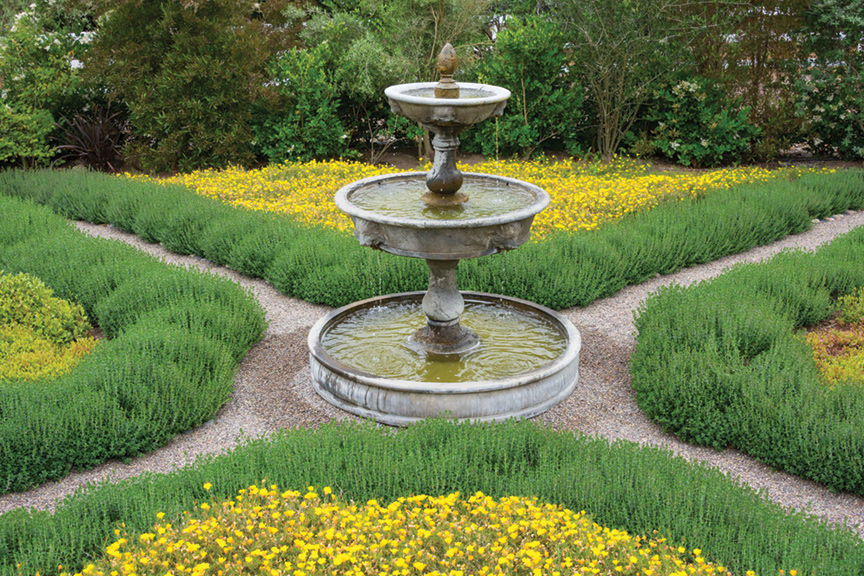 A tiered fountain stands in the center of a geometric parterre. Each quadrant is edged with germander and filled with golden sundrops. • A mix of bold flowers includes orange alstroemeria, pink geraniums and chartreuse euphorbias.

Missing here and around the garden are ornamental grasses, bougainvilleas and some other drought-tolerant staples Gay trialed only to watch most succumb to the garden’s tough clay soil, frosts and/or munching critters. “Recently a deer managed to come down the driveway to nibble roses,” she says with a shake of her head.

Nearby are two focal points, formal contrasts to the garden’s mostly naturalistic style. One showcases a bronze two-faced moon, a housewarming gift from Tom’s brother Cranston, an artist. Held high on a post, the sculpture overlooks a flaring sun Gay designed, outlined in rocks and filled with glinting gold glass. Glowing dymondia and sundrops circle the eye-catching installation she calls “Sun-Moon.” 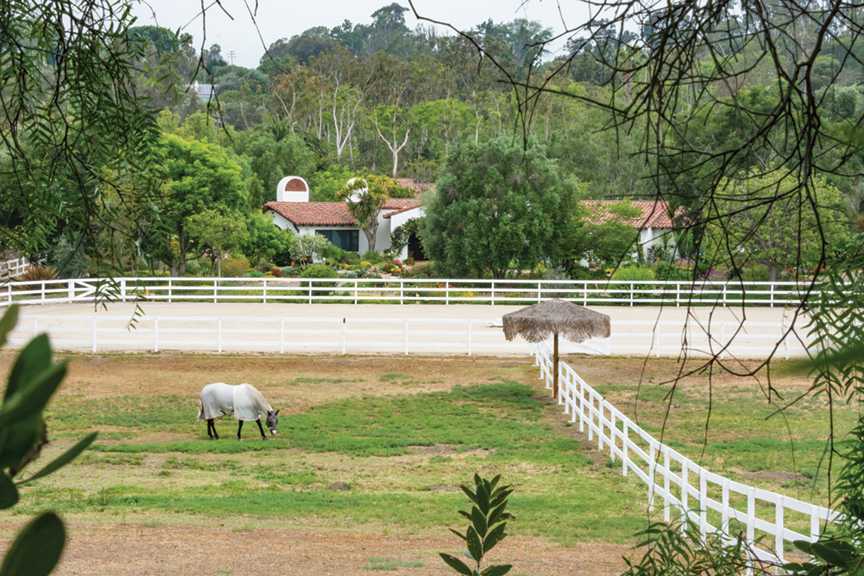 Gay’s horse, a paint named Bearly Lonesome, wears a mesh coat for sun and bug protection when out in the pasture.

Around the corner, adjacent to a narrow patio outside the master suite, gravel paths divide a geometric parterre. Purple-flowered germander hedges surround four quadrants mass planted with gold sundrops and vivid blue dwarf plumbago. At the center is a tiered fountain, one of three fountains in the garden. “Just hearing the sound of water seems to cool things down,” Gay says.

In the front yard, a boulder-edged driveway circles through what had been the largest swath of lawn. The center island is lush with olives and redbud trees underplanted with ‘Hot Lips’ sage, African daisies and other tough beauties. 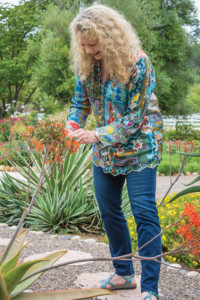 Gay admires the bright orange flowers of a showy aloe, one of the colorful succulents added to her garden when large swaths of lawn were removed.

Closer to the house, ‘Marjorie Channon’ pittosporum, ‘Safari Sunset’ leucadendron, yellow bells and other choice shrubs create a layered tapestry with flowering perennials and container plants. Wide stairs to the front door are edged with ruby and pink geraniums and accented with a stone sculpture of a resting horse, a birthday gift for Gay from her husband.

Surprisingly, succulents are in the mix here. “My husband was so glad,” says Gay of her concession to plant showy aloes and hesperaloes, sculptural octopus agaves and slender-bladed Mexican grass trees. “All were picked to fit in with the other colorful plants in the garden,” she adds.

Strolling the garden’s paths or ambling past in the saddle of her horse, Gay revels in the landscape’s abundance. “We aren’t trained, so we learned by trial and error,” she says. “And doing it all ourselves makes it mean that much more to me.”