Designing with a Living Palette 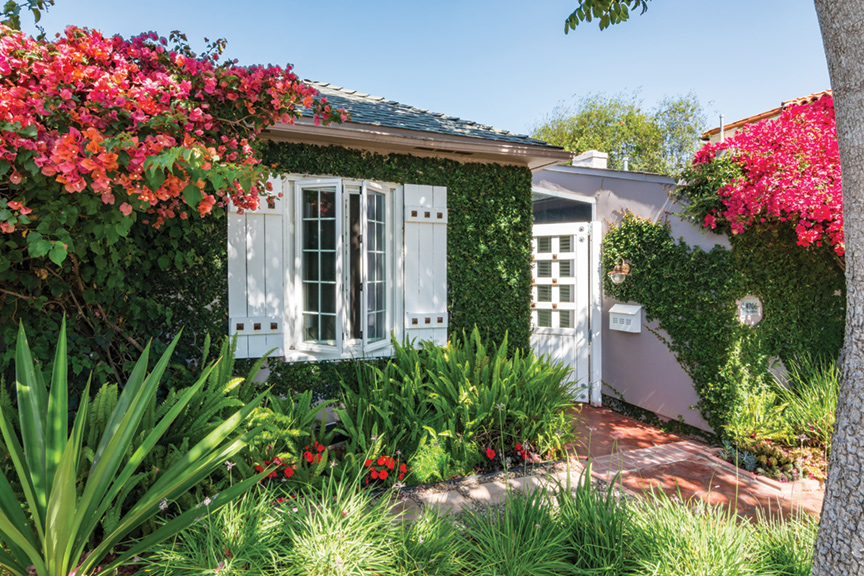 Best Small Space. Only about one-third of this half-acre lot on a plot that sloped down to a canyon is suitable for gardening, but retired architect David Moore proves you don’t need acres to create an interesting—and beautiful—landscape on his Talmadge property. 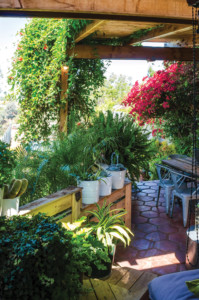 Solid cedar decking-turned-roofing ensures year-round patio use in David Moore’s Talmadge yard and also supports mandevilla. To the right, red bougainvillea intertwines with the neighbor’s star jasmine. A zebra succulent and a mix of echeverias fill the white containers while the foreground features potted Boston ivy and cactus.

Award-winning architect David Moore spent 30 years designing large commercial shopping malls and served as the Westfield Group’s national director for U.S. design. But when he retired in 2014, he finally had time to indulge in his true passions: painting, cooking and gardening.

Over the course of his peripatetic career, he moved regularly. At one point or another, he owned a salt box in Normal Heights; a Cape Cod-style abode in Boston; a mid-century modern home in Phoenix; and a five-level, vertical, contemporary house in Venice, Calif. Each home, though vastly different architecturally, had just a postage stamp-size space for gardening.

“When you have small spaces it’s interesting to see how much you can do and how lush you can make it,” David says, who dabbled with gardening along the way but couldn’t really delve in until he stepped away from his demanding job.

In planning for retirement he decided to return to San Diego, a favorite city where the Texas native had spent much of his adult life. He found the canvas he sought on a quiet street with eclectically designed homes in Talmadge. 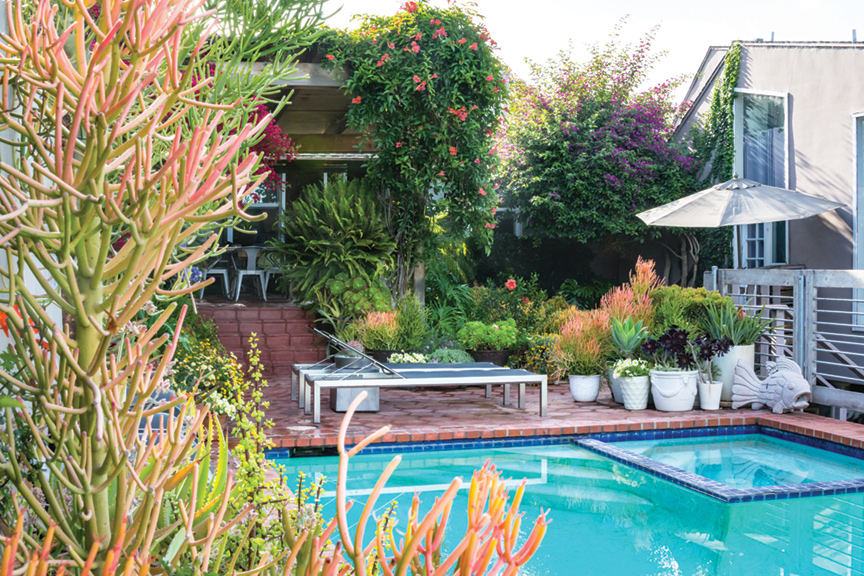 Two lounge chairs, accented by pots of drought-tolerant flowers, succulents and mature bougainvillea, mandevilla, star jasmine and abundant ferns, sit on the terrace by the pool. Sticks of fire contrast with the blue of the pool.

As the 19th residence he’s owned, the approximately 2,000 square-foot house met his criteria for comfort and livability. The vine-covered stucco home was originally constructed in 1947 as a “cottage ranch.”

Later, owners in the mid-’80s transformed it into what David calls a “modified ranch eccentric-style” house with a vaulted living room and two-story addition accommodating a master bedroom and loft office. It sits on a half-acre lot sloping onto a canyon, with about a third of the property suitable for gardening. 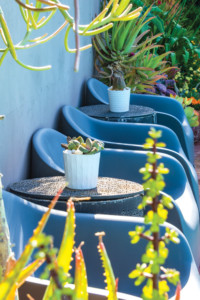 Small pots of haworthia and euphorbia sit atop decorative laundry baskets repurposed as side tables alongside the pool.

When he purchased the property seven years ago, the garden had “the basics,” towering trees in front and mature bougainvillea and mandevilla in both the front and backyards, but little more.

“It didn’t look bad,” he says. The lot essentially provided him the room and creativity to express his horticultural and design talents.

David enjoys working in the garden and does all but the heaviest work himself. He is clear about his philosophy of gardening, preferring to augment interesting succulents with colorful drought-tolerant vegetation.

“For everyday living I go for landscape charm,” David explains. “A large part of what I’ve added is drought tolerant. It’s all about the water, sun and shade. I like the addition of color, texture and leafy ferns.”

After identifying a lush orange-flowering tree as an African tulip tree, he chose to keep it and the mature Podocarpus trees in front. 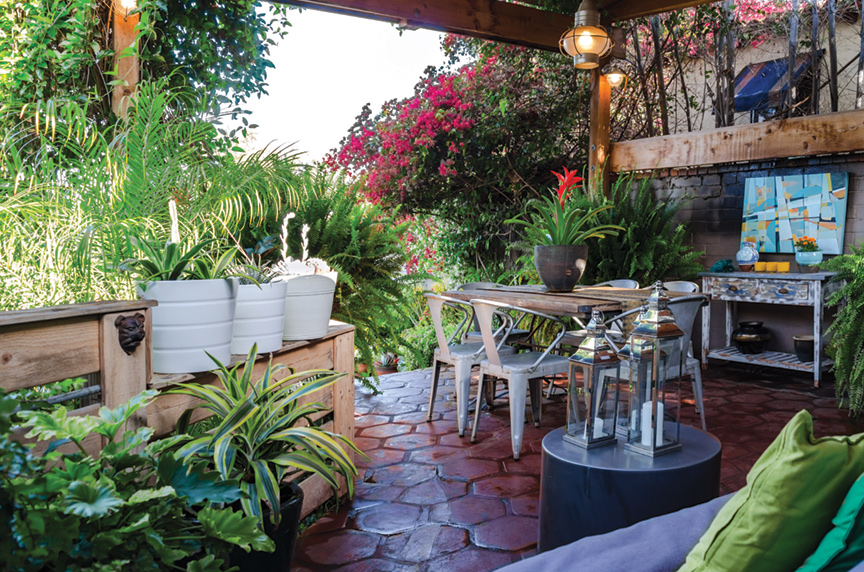 He took advantage of a state rebate program to remove the grass around the house and replace it with succulents and drought-tolerant plants. His choices helped delineate the garden’s structure, marked also with hexagonal clay-tiled pathways, brick edging and variegated rock accents.

As lawn replacements in the front, he used two half-circles of lantana and a row of society garlic, along with a hedge of euphorbia, orange sticks of fire and green pencil cactus. In the back, he replaced the grass with sticks of fire, adding ferns and schefflera after cutting back the purple bougainvillea to allow for more filtered light.

In the back, prior owners installed a 10-foot-deep pool, built into the canyon and supported by a 12-foot retaining wall. Around half the pool, David installed a fence of his own design, using metal posts from the prior chain-link fence that he augmented with wooden frames and galvanized metal pipe slats. 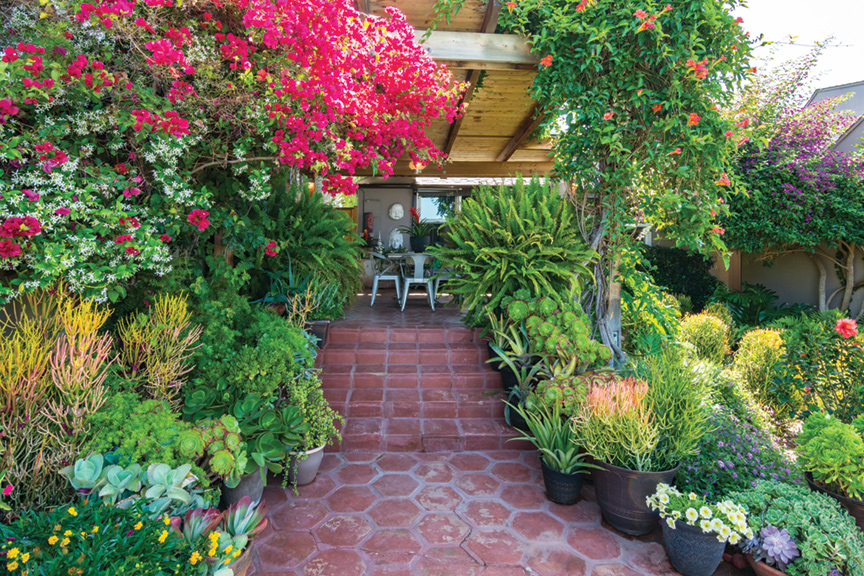 Bromeliad and just-pruned yellow-green sticks of fire line the stairs to the right. To the left are yellow lantana, bougainvillea and star jasmine.

“The architect in me can’t avoid adding a focal point,” David admits. “I’m a designer at heart.”

To brighten the stucco-covered wall abutting the pool terrace, brilliant red-magenta bougainvillea mixes with star jasmine, overflowing from the neighbors’ garden. David surrounded the patio and lined the wall base along the pool deck with numerous pots containing succulents such as jades, aloes, crassule, euphorbia, kalanchoe, sedum and portularcaria. 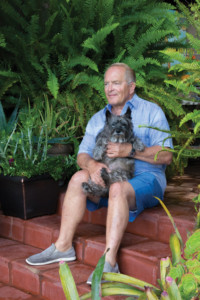 Tucked amid the flowers is a distinctive pink-and-blue-green warty echeveria, grown from a cutting.

For color and texture, he added containers filled with marigolds, lantanas, petunias, agapanthus, plumeria and bromeliads, filling his color palette with vivid blooms in reds, yellows, blues and oranges.

Near the outdoor dining room and entertaining area on the trellised raised patio, he planted a row of cymbidium orchids that bloom annually, plus pygmy palms for texture and cooling.

For David, the essence of gardening is “picking the right plant for the right space” to achieve the desired balance of color, shade and structure.