After inheriting the family residence, a longtime decorator hires her daughter to create the home of her dreams 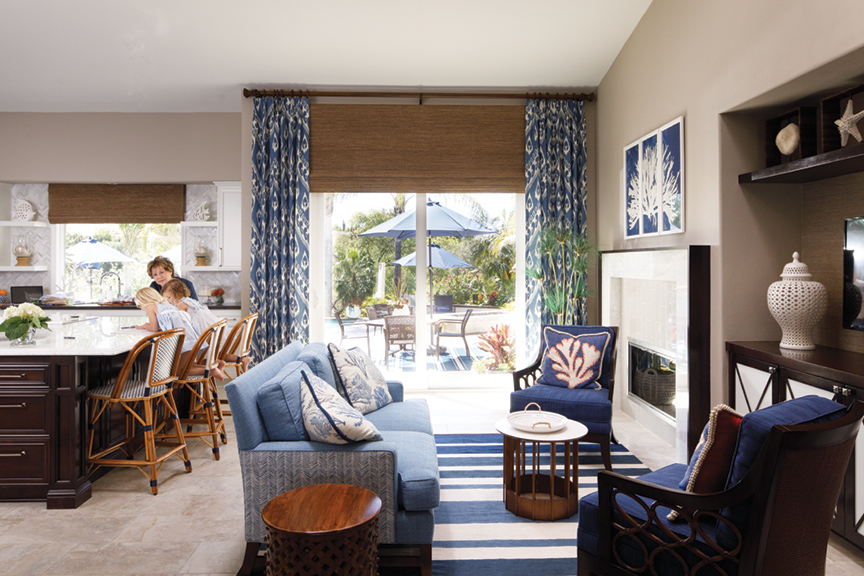 Bonnie Parent did all the legwork when it came to relocating her mom, Bobbette, from her home in Rancho Santa Fe to the Poway area. She scouted houses on the market, narrowed the choices, then viewed them with her mom who, after the passing of her husband Joe in 1998, wanted to move closer to Bonnie and Bonnie’s two daughters.

Finally, Bonnie found the perfect home—a 4,300-square-foot house, located at the end of the street, with a pool and lots of space to entertain. After all, Grandma Bobbette’s house was, and would always be, the gathering spot for family celebrations—graduations, holidays, reunions, pool parties.

“As Mom and I pulled into the long driveway,” Bonnie says, “she saw a bird, and she turned to me and said, ‘Joe wants me to have this house.’” 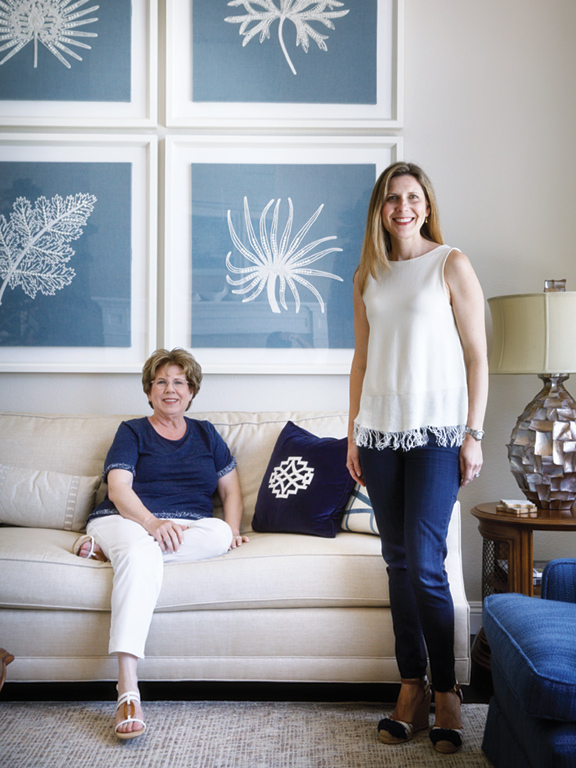 “My grandfather always said he wanted to come back as a bird,” explains Jennifer Coleman, Bonnie’s oldest daughter. After he passed, a bird coincidentally started popping up at important family functions. And it wasn’t just any bird. It was the same bird every time.

For nearly 15 years, Bobbette lived in that Poway home that Bonnie found for her, but she didn’t ever really nest. She moved her furnishings in and made it inviting but, as Bonnie discovered when she cleaned everything out after her mom passed away six years ago, Bobbette didn’t make many changes to the house itself.

“After decluttering and seeing the home with bare walls, it didn’t feel like my mom’s house anymore,” Bonnie says. “It felt like the home the previous owners built.” And, in viewing the place as a blank slate, Bonnie came to a realization: The residence could be made over as the perfect home for her while at the same time she could carry the torch and keep Grandma Bobbette’s house synonymous with family gatherings. 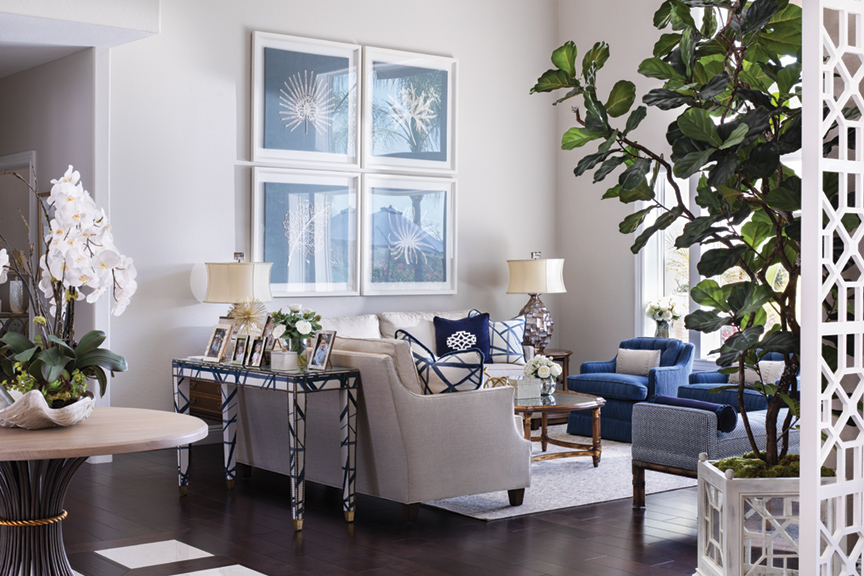 The divider in the foreground visually separates the living and dining rooms and mimics the motif on a buffet that belonged to Grandma Bobbette.

However, making it her own meant a thorough interior remodel. And though Bonnie had worked for many years as a decorator, she opted to hire her daughter, Jennifer, an interior designer working and living in Ridgefield, Connecticut.

Jennifer had done projects remotely before. “I knew we could make this work,” she says. With architectural floorplans, a little extra time and labor, and virtual decision making, a room can be space planned from just about anywhere, Jennifer explains. 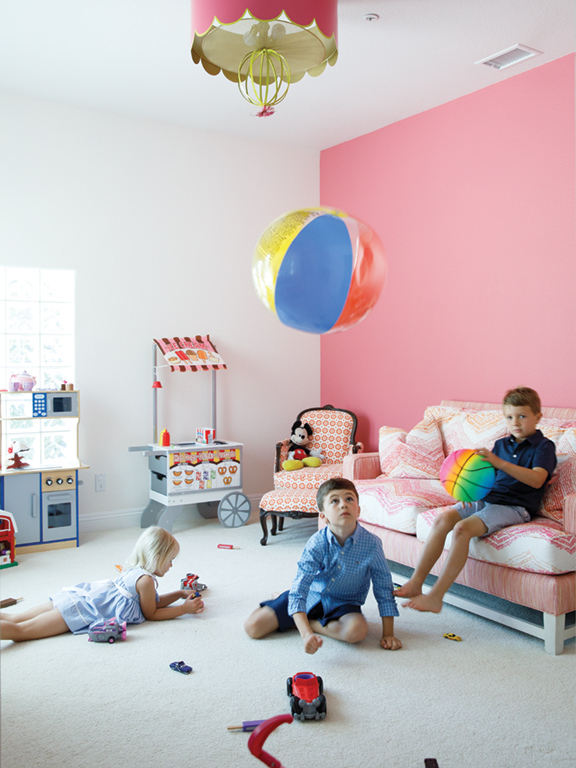 Avery, Alex and Jackson frolick in the playroom.

Bonnie wanted to transform the mostly white house that had hints of sponge-painted peach and mint and Southwestern design details into a home that felt like a vacation retreat. “I wanted casual elegance,” Bonnie says. “I wanted it to feel like the L’Auberge in Del Mar but done in shades of blue, my favorite color.” She also wanted to incorporate meaningful furnishings and artwork she’d inherited from her grandmother and her mother as well as pieces her girls grew up with. And everything had to be kid-friendly so the five grandchildren could play, touch and lounge without worry about damage.

Jennifer devised a plan for the five-bedroom, five-bathroom home that updated the design and improved materials and furnishings without changing the original footprint. She modernized a passageway between the family room and sitting room off the kitchen by widening the doorway and extending it up to the ceiling. And she gave it a less Tetris-like look by dumping its symmetrically stacked glass blocks.

In fact, she removed most of the glass-cube architectural details that were so popular in the late ‘80s when this home was built. “There was so much of it,” she laments. And although she may have wanted to get rid of it all, there were areas where it didn’t make financial sense to remove it—in the master bathroom, kids’ playroom and family room. Another decades-old element she eliminated was a large white column between the living and dining rooms. 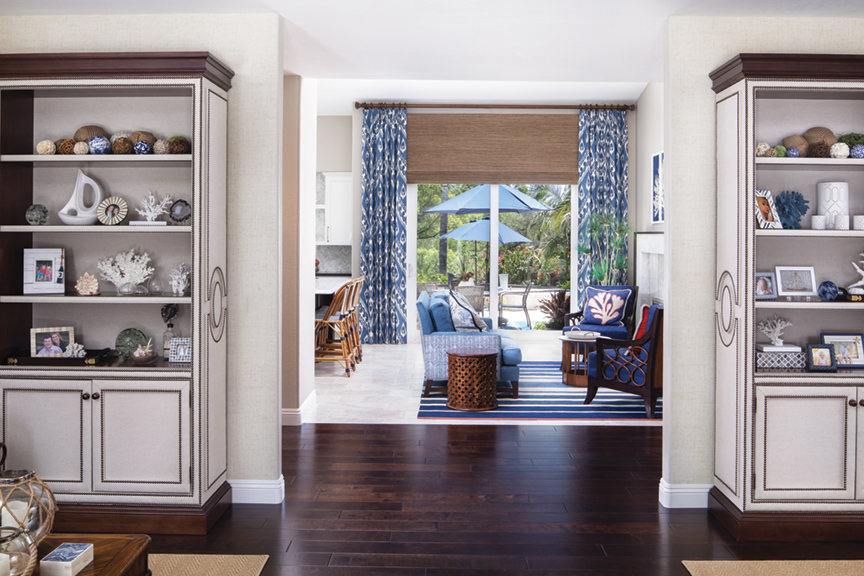 Jennifer widened the passageway between the family room and sitting room off the kitchen.

To further update her mom’s new residence, Jennifer laid hardwood floors throughout the single-story home—except in the newly carpeted bedrooms and in the bathrooms and kitchen, where she kept the travertine-lookalike porcelain tile that she had recently helped her grandmother choose.

Also in the kitchen, she replaced a serpentine-style island with a bigger rectangular one made of white marble, bought all new appliances, installed a herringbone-pattern backsplash and floated shelves on either side of the window above the sink.

All fireplaces received a facelift, bathrooms were gutted (aside from the plumbing) and all rooms received new coats of paint—from neutrals to turquoise (in a guest bedroom), pink (in the playroom) and navy (in the office).

Orchestrating the project from 3,000 miles away meant decisions had to be made efficiently and in larger chunks. Extra days were tacked onto family vacations and separate trips were made to get work done. Bonnie flew to New York to walk the Decoration & Design Building (D&D Building) on Third Avenue with Jennifer and pick out artwork, custom pieces and large-scale furnishings. 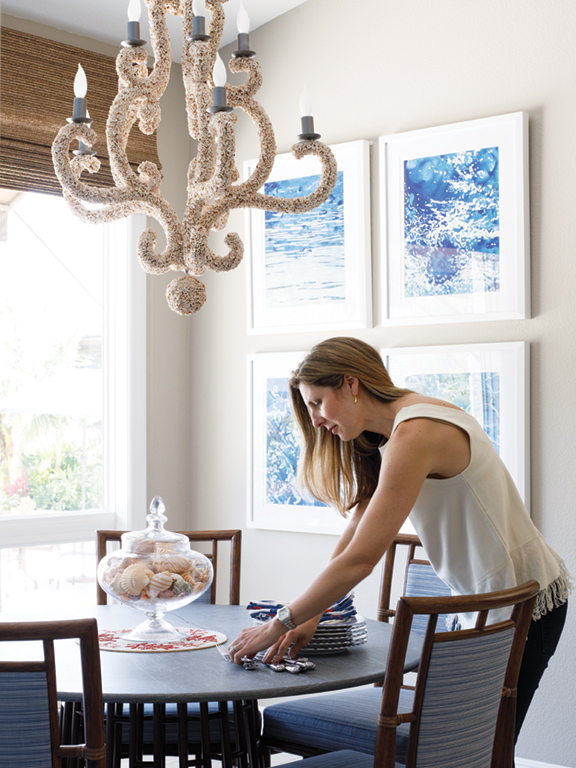 Jennifer sets the kitchen table beneath a chandelier Bonnie wouldn’t have picked but loves.

A few months later, Jennifer flew to San Diego and spent four days canvasing stone yards, fabricators and other vendors to make the sink, faucet, cabinet, hardware, flooring and countertop selections. “Nothing ever felt rushed, because we already knew what we wanted,” Jennifer explains. “We just were looking for the company to provide it.”

Then the mother-daughter team edited existing furnishings, deciding what would stay—like the dining table and the coffee table in the living room—and which needed to be freshened up with a coat of paint or new upholstery. The blue chairs and bench in the living room and all the dining chairs now wear new fabrics. Jennifer had the blue-and-white dining chairs custom made; the wood legs were stained to match the table that was in the dining room of the New York house where Bonnie spent her childhood. 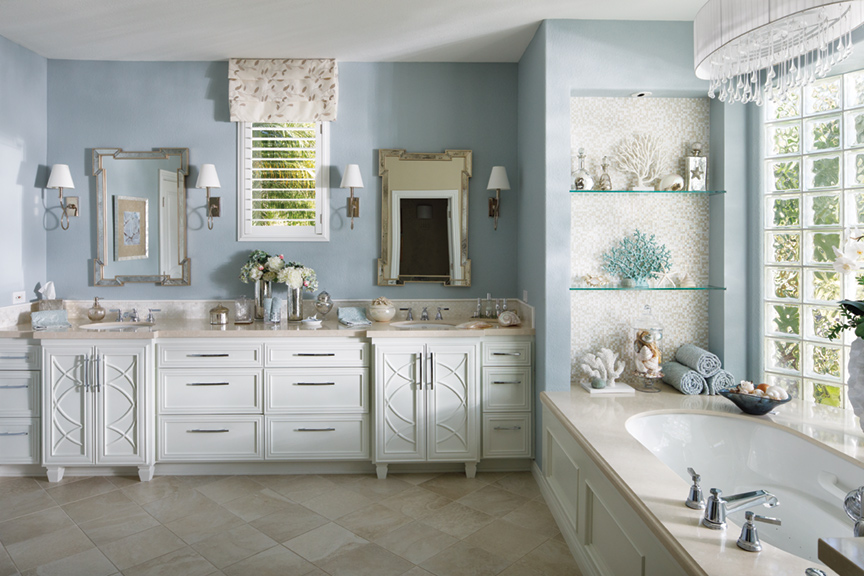 Jennifer kept the glass blocks in the master bath but updated everything else. • This little chair, used to pose each of the grandchildren for photographs, was in Bobbette’s home, but Jennifer reupholstered it to suit Bonnie’s taste.

Bonnie and Jennifer then used weekly calls to make other decisions. “Pick the sconces you like from these three choices and things like that,” Jennifer says. “We’d plan additional calls so I could be there virtually for specific details like the tile inlay in the wood floor in the foyer.”

But sometimes it was difficult to turn off the shop talk. “We’d be on the phone talking about the kids or something, and my mom would tell me she saw something she liked for the hallway,” Jennifer says. “We had to remind each other to add things that weren’t urgent to our running lists and discuss them at our next scheduled time as client and designer.” 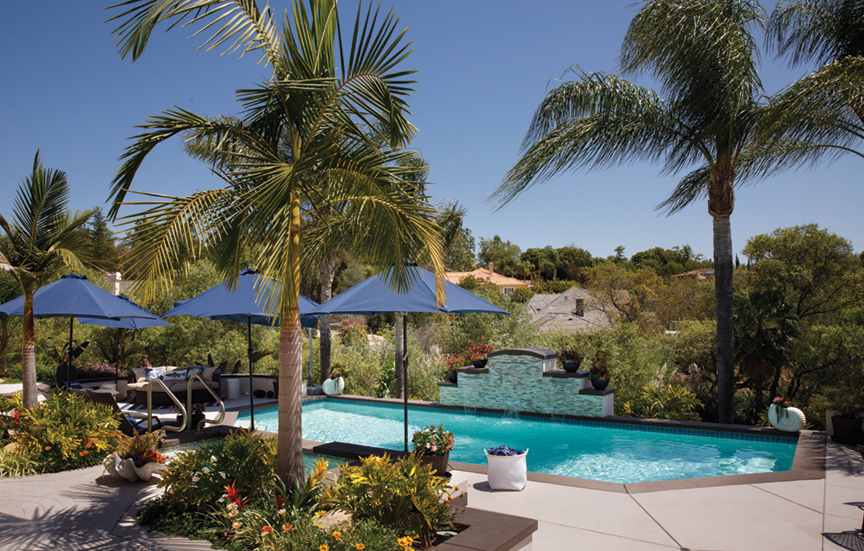 he hired a landscape architect to redo the rest of the backyard, including the removal of a Grecian-like arch at the pool’s entry and the addition of a fountain.

Jennifer also admits that she’s had to put a stop to her mom’s urge to buy items with a shell motif. But she hasn’t barred her mom from adding bird figurines to her new nest. In fact, Jennifer encourages it, having purchased Jonathan Adler bird ornaments for her mom, which now sit on the living-room mantel.

The ornaments serve as a reminder of the real bird that inspired Bobbette to buy this home years ago—the same bird that now also comes to visit Bonnie from time to time. 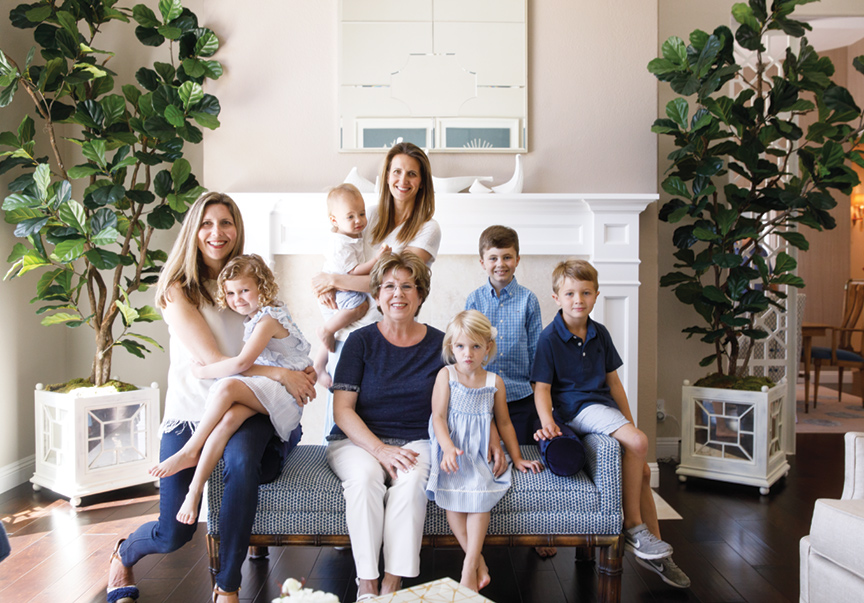