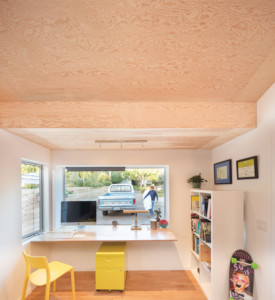 Steve’s home office, a minimalist space that had been the kitchen, features a non-standard Marine-grade plywood ceiling, part of what Steve calls his “own brand of pragmatic modernism.”

The process of discovering who you are and what you are meant to do can take a lifetime or, as in the case of Steve Hoiles, your true calling can dawn on you during an “aha” moment.

As an avid snowboarder (he’s from Canada) and surfer (it’s big in Vancouver, B.C.) it made sense that he would own a surf and snowboard shop. But that wasn’t his calling. It turns out that, yes, surfing was, and is, one of his passions but not his life’s work. His other passion—architecture—was his real craft.

“In the summer of 2003, I went on a heritage home tour in West Vancouver,” Steve says. “I saw some Canadian modernist houses and I was blown away by a modernist house [the Helmut and Hildegard Eppich House] designed by Canadian architect Arthur Erickson. I sold my business, sold the commercial building I owned, sold my house and, in 2004, bought a 1967 post-and-beam [home].” 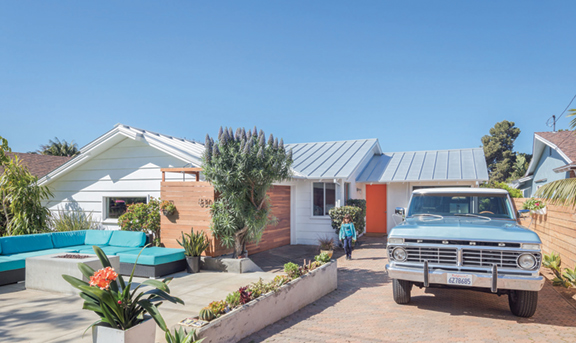 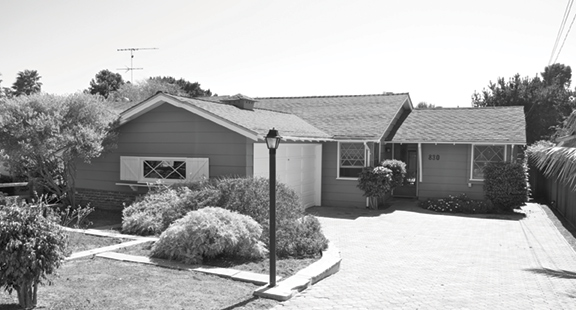 At 9 years old, Hana Hoiles may not appreciate the beauty of how her dad, Steve, added a plethora of eco-friendly features and provided a modern, sleek aesthetic to their 1950s Encinitas cottage without altering the footprint of the original house (above). (She also may not realize that even the family truck is a mid-century match.)

His first design project was renovating that home in Canada. He says he started rough and made some bad design decisions but didn’t give up. He surrounded himself with forward-thinking architects whom he admired and who were “good at what they did,” and he hired them as consultants. He learned along the way—and the word “can’t” wasn’t part of his vocabulary. 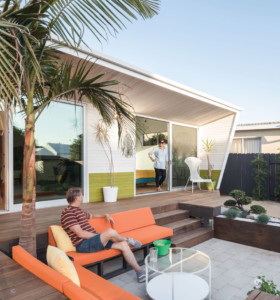 Steve asks his wife Liz to join him for a late afternoon snack at the backside of the house where sliding glass doors infuse the living spaces and master bedroom in natural light.

“I kept at it,” Steve says. “It was an evolutionary process of learning. Actually, it was more about figuring out the details that were successful and continuing with them. In 2005, I started doing spec houses and I’ve been doing that ever since.”

As of this date, he’s designed 11 homes through his business Surfside Projects, beginning with residences in Vancouver and, later, residences in Southern California. One of those houses, a development project in Encinitas, ended up becoming his own home in 2012. It’s where he and his wife Liz, an industrial designer, and their two daughters, 11-year-old Keiko and 9-year-old Hana, still live.

“I’d been coming to San Diego for more than 15 years,” Steve explains. “I used to come down for the ASR [Action Sports Retailer] show that was at the San Diego Convention Center—which, by the way, was designed by Arthur Erickson. In fact, a lot of downtown is designed by Canadians. So, I’m just one of many Canadians coming down here. I spent most of my time in North County in the Encinitas area, so it was an easy transition.”

A photo Steve took of Swami’s, a surf spot that embodies the beach culture of Encinitas, was colorized and blown up to make the perfect living-room backdrop that symbolizes the laidback spirit of the house and the community it’s in.

Steve and Liz liked the 1957 house because it had some “funkiness” to it. And it didn’t hurt that the 1,698-square-foot, three-bedroom dwelling on a cul-du-sac of cookie-cutter-but-cute cottages was two blocks from the Pacific Ocean.

“Few older coastal homes in Southern California are still standing that ooze the iconic beachy character,” Steve says. “It was a simple rancher, so there was a lot we could do with it. We wanted to morph it into an environmentally conscious, fun living space.”

Steve’s remodel of the home showcases his love for modernist SoCal architect Richard Neutra design aesthetics—spacious and compact, functional and open, streamlined and simple—as well as his endearment for the architecture of Cliff May whose mid-century modern ranch houses were about informal, relaxed living indoors and out. 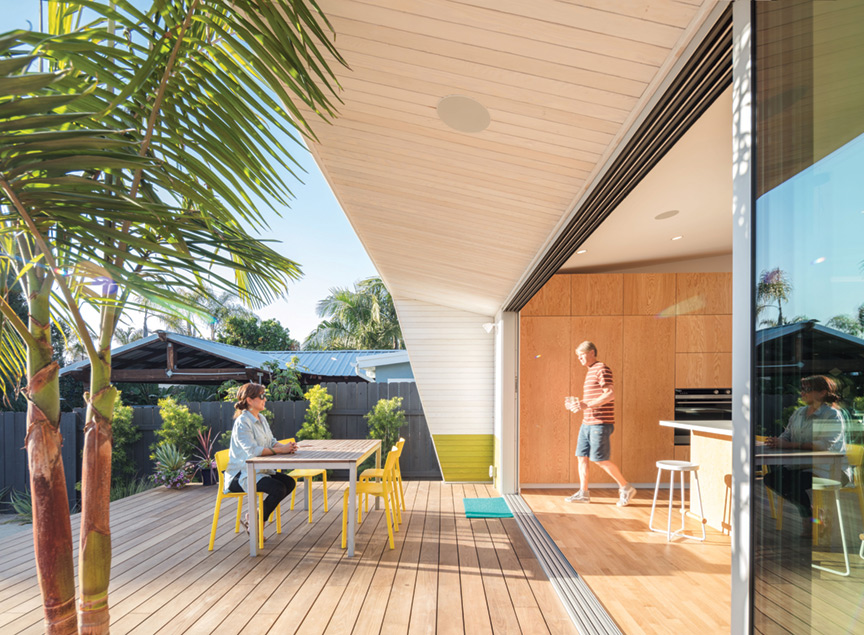 The exterior dining space becomes an extension of the kitchen through floor-to-ceiling sliding glass doors that blur the boundaries between indoors and outdoors.

“When we bought the house, there were two distinct areas that were basically equal in size but awkwardly joined with three different floor heights,” Steve says. “The original cottage was located closest to the street front and a rear extension had been added in the late ’60s.”

Since the home’s modest size was part of its character, Steve opted not to add any square footage. Instead, he kept the original two-bedroom, one-bathroom structure on the front-half of the house (“ironically, it was in better condition than the newer addition”), tore the newer back half of the house down and redesigned the residence using the same slab.

In this old-meets-new metaphor, the original kitchen became a home office that, when needed, morphs into a guest bedroom; and the original vaulted-ceiling living space at the front of the house along with the ’60s added-on sunken family room became a no-walls kitchen-dining-living space that embraces the outdoors by the addition of floor-to-ceiling sliding glass doors that open onto a new deck. 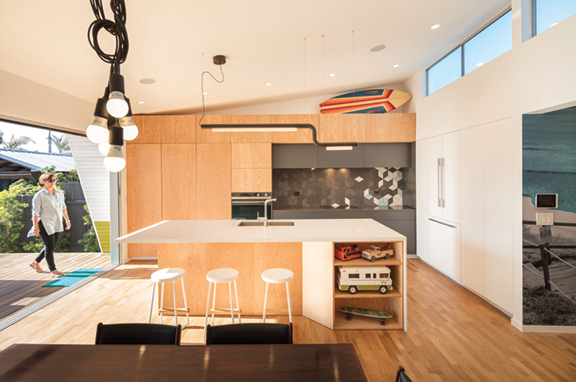 Rhombus-shaped tiles in the backsplash have five varying textures. The flexibility of layouts from this one shape creates an interesting mosaic artwork for the wall.

Another full sheet of glass at the deck expands across the master bedroom, where it slides open to give the bedroom an indoor-outdoor ambiance similar to the great room. This third bedroom, originally small and not worthy of the title “master” bedroom, now rates that designation. 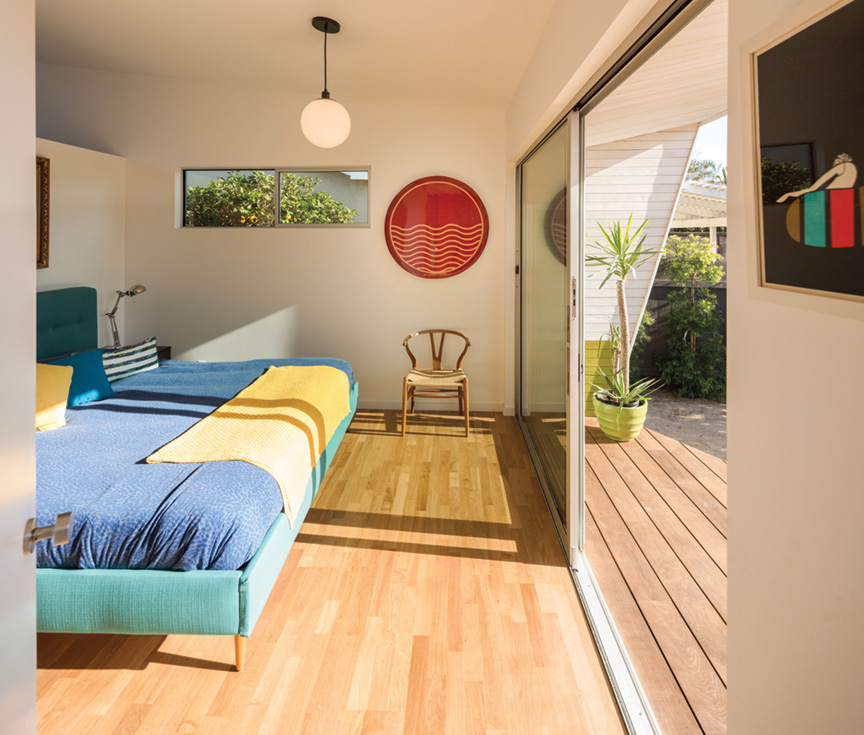 The master bedroom is one of Steve’s favorite spots in the house. “I wake up with the east sun coming in, I hear the birds, and I can tell what the surf is doing by the way the leaves are blowing.”

Not only does it welcome the outdoors in but, by taking some space from the old sunken family room, it includes the happy addition of an adjoining bathroom and walk-in closet.

“This house was a little bit of an R&D [research and development] for me,” Steve admits. “It’s kind of like my design lab—an experimentation of mixing in new yet proven materials and techniques for a signature brand of pragmatic modernism that, once tested, could be used mainstream in Surfside Projects’ homes.”

For example, Steve’s idea to sandblast the exterior Douglas fir siding raised the grain so that when it was whitewashed, it gave the façade an unusual, interesting texture. He also chose marine-grade plywood sheets, taken right off the lumberyard shelf, for the home-office ceiling and master bathroom and kitchen cabinet doors. 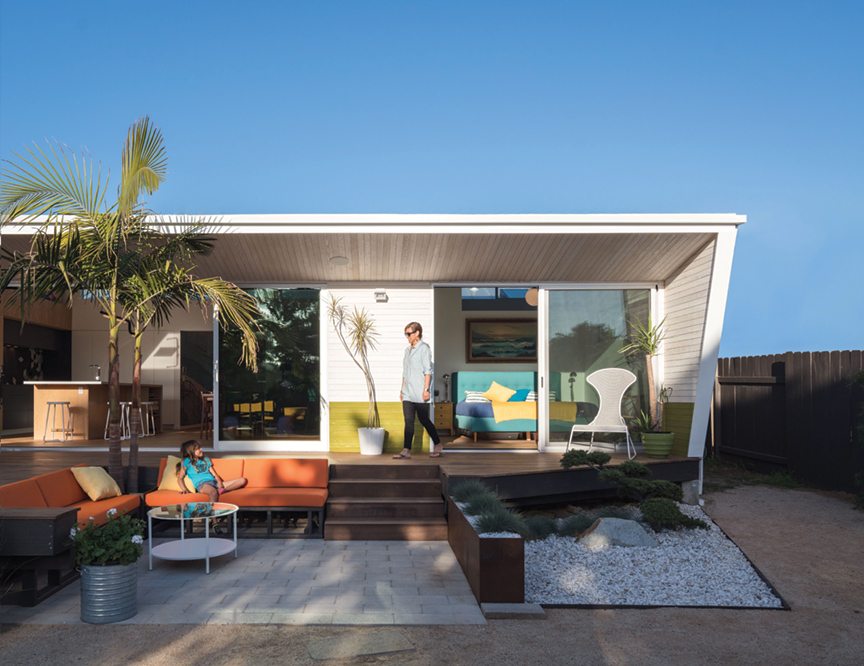 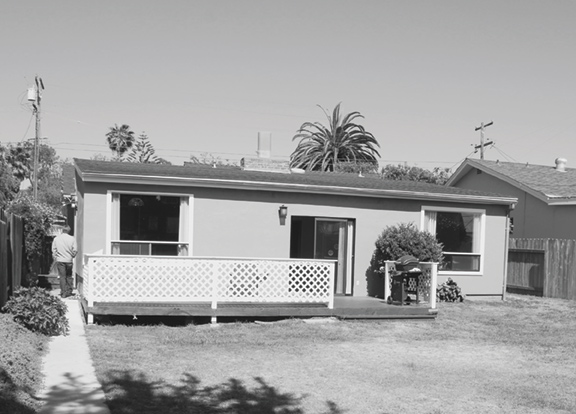 While the footprint remains the same, passive designed overhangs, thoughtful use of natural wood, an abundance of natural light and a simple, open plan now define the updated home, which has a more modernist take.

Like the horizontal green stripe he painted that travels along the siding on the home’s back exterior. Although it may give an artsy impression of shrubbery, it’s actually a clever echo of Winnebago’s green graphics. (The design band is emblazoned on the vintage Tonka toy Winnebago motorhome that sits on the kitchen island’s shelf and reminds Steve of his childhood and happy family trips in a full-size version.)

Or like the extensive use of Palm Springs Gold decomposed granite as ground cover that ingeniously transforms the xeriscape backyard, just beyond the deck’s dining space and outdoor sunken living room, into a Southern California campground.

Creative, delightful ideas such as these put the fun in functional and reflect Steve’s philosophy for his home designs. “I’m a pragmatic developer of homes. I just want to make some environmentally friendly, durable living spaces where people can hang out and enjoy themselves. Isn’t that what a house is supposed to be?” 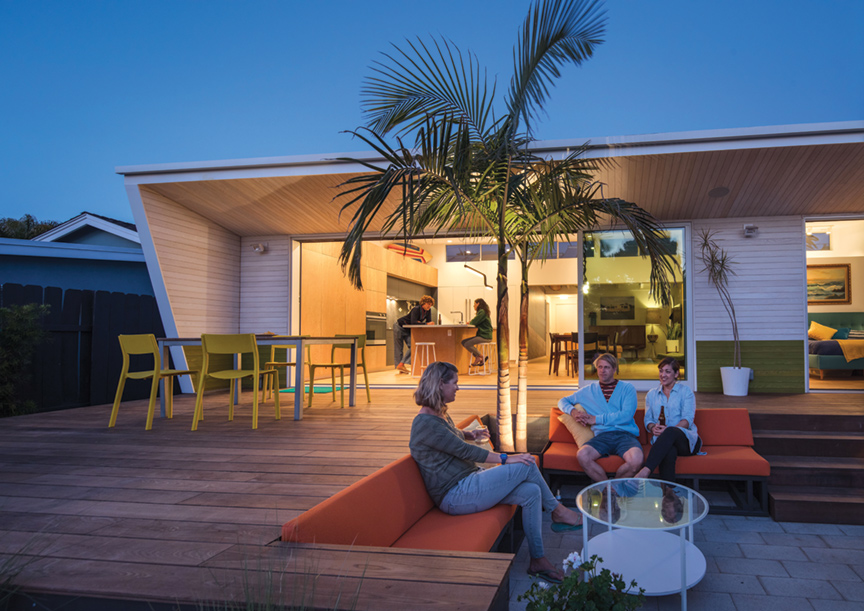 In the evening, friends and family love to gather in the comfort of the backyard and, as night closes in, everyone (well, almost everyone) gathers around the “campfire” in an area that was designed to mimic the look of local state beach campgrounds. Xeriscaping reduces the home’s water usage.