The Lowdown on Downtown 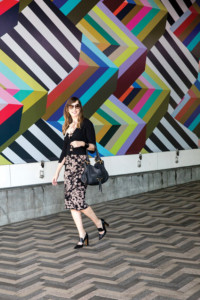 The East Village is booming thanks to its rapid transformation into an urban center where people can live, work and play. The neighborhood that spans 130 blocks between Seventh Avenue and 18th Street has been home to Jules Wilson Design Studio since 2012.

It’s where the principal interior designer and founder has grown her business of “ninjas and secret agents” (that’s what she calls her managers and team members) and where she’s put several of her design stamps.

I asked Jules to show me the places she frequents in the neighborhood she’s helped build. “It’s fun being a part of the vibrancy happening here,” she says. While Jules doesn’t live in the East Village (she moved from Little Italy to Mission Hills in April), she creates, plays, sweats, eats, drinks and shops within walking distance of her studio. 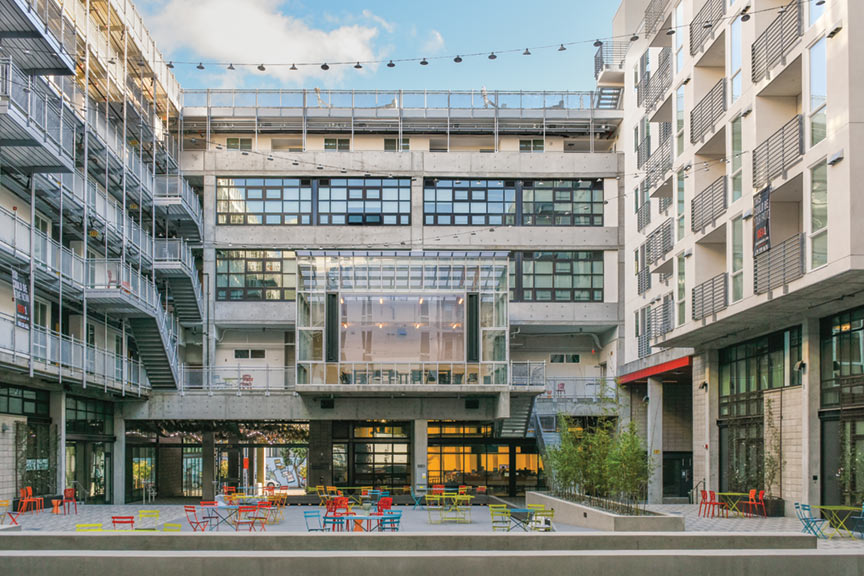 1. IDEA1
The Hub, a common courtyard on the ground floor of this live-work complex that functions like a flexible events space with a movie screen and a PA system and can accommodate hundreds of people, has become a real draw for the community, including Jules. “I find it inspiring to come and see how people interact with and use this space,” she says.

Billed as a stage for creatives, The Hub has hosted private parties, presentations, meetups, hackathons, art fairs, panels and more since its opening at the end of last year. To find out about upcoming events, visit ideadistrictsd.com/blog and sign up to receive invites—many of which are open to the public. 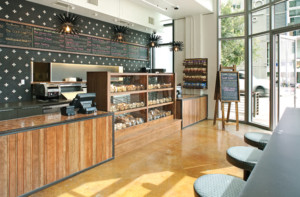 2. Brooklyn Bagel & Bialy
I’m slightly skeptical when Jules takes me to this cafe that promises genuine New York-style bagels and bialys. Having lived in Manhattan and Brooklyn for a decade, bagels and schmear were part of my Sunday morning ritual. But Jules assures me the bagels have the same chewy texture I prefer. (I actually pop in later after the interview, and let me tell you, these are as New York as a San Diego bagel gets. Yum!)

On this late morning, Jules opts for a glass of fresh-squeezed OJ to enjoy outside but says the coffee is really good too. She explains that her usual is a jalapeño bagel with jalapeño cream cheese, though the shop also makes a selection of breakfast and lunch sandwiches. But it’s 11 a.m. and almost lunchtime, and there aren’t a ton of bagels left. Lesson learned: Arrive early for the biggest selection.

3. Fit Athletic Center
Though it’s not time for Jules to meet her trainer, she takes me inside to tour the flagship location of a place she designed and where she raises her heart rate twice a week. At noon, the joint is jumping, but it doesn’t feel crowded. Jules tells me it’s The Setai hotel in Miami meets Fight Club the movie.

Graffiti art mingles with exposed-brick on the walls of the high-energy second-floor workout room, part of which overlooks PETCO Stadium, and central lounge. The locker rooms and rooftop pool, on the other hand, have a tranquil, spa-like feel.

4. Cowboy Star Restaurant & Butcher Shop
Quiet lunches with clients, industry friends or one of the office “ninjas,” as well as drinks after work take place at this eatery just around the corner from the Jules Wilson Design Studio. “It’s got such a cozy, nice atmosphere,” Jules says.

“You can’t see in from the outside so it’s got a hideaway feel.” Today, Jules saddles up to the bar and orders a sparkling water before her afternoon meeting, but, no surprise, she recommends anything on the steak menu (there are 12 hand-cut variations) to pair with a pinot noir or the malbec. 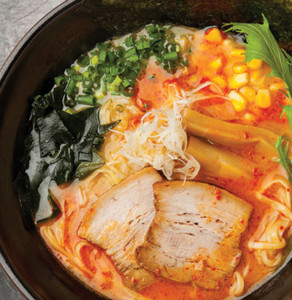 5. Beshock Ramen & Sake Bar
Jules freely admits to getting lunch from this newish (it opened in 2016) ramen shop several times a week. “I like the spicy miso ramen,” she says. It helps that it’s a two-minute walk from the office. “And they deliver, which is so great.” Besides ramen, the culinary hotspot serves sushi, poke, bao buns and a range of sake.

6. Wild Dove Boutique
On days when Jules steps out of the office for lunch in the neighborhood, she often takes a short walk and pops into this nearby shop. “They have great clothes,” she says of the 2-year-old store. The boutique that recently underwent a major remodel, making it bigger and brighter with all new floors and dressing rooms, specializes in pieces that are multifunctional, transition easily from day to night and cost less than $200.

Jules pulls a Kamryn cape from the Show Me Your Mumu collection in a graphic leaf print off the rack. “I love Palm Springs, and this feels very Palm Springs to me.” Other popular lines include basics from Stillwater LA and shoes from Dolce Vita, among others.