When 11-year-old Kimi Schroder walked into her bedroom last November, she was speechless, something completely out of the norm for the typically talkative and expressive tween. “But she couldn’t say a word,” her dad, Peter Schroder explains. “Her jaw just dropped.” 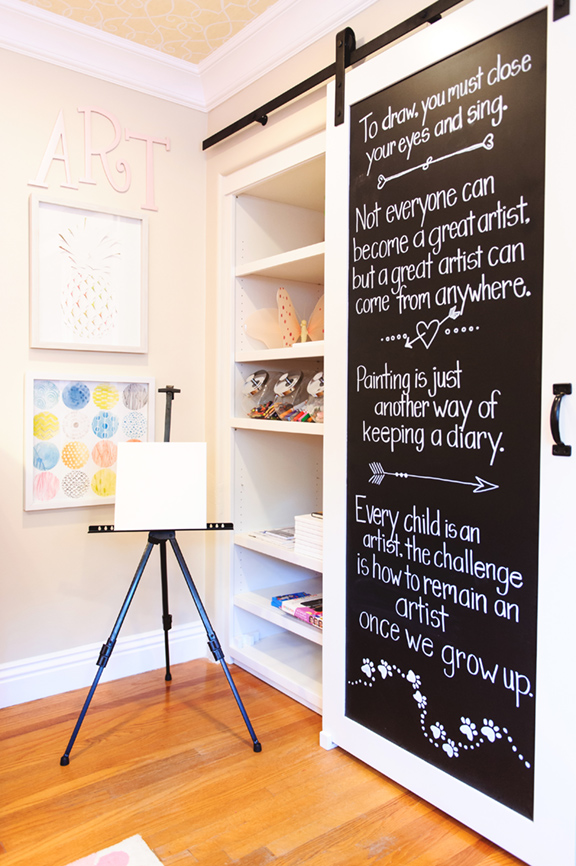 Behind Kimi’s bedroom door, which had been kept off limits for several days, she found her bed had been lofted to include a study space underneath; a custom mural depicting Harry Potter-meets­-Star Trek (two of her favorites) was now on the underside of the sleeping area; a flying key mobile was hanging from the ceiling; turquoise-and-white stripes were painted on all four walls; and new items such as a karaoke machine (she loves to sing), a record player and the coziest furry chair to curl up in and read were now part of her private domain.

“The room was beyond what we could have imagined,” says Peter, a single dad.

Kimi’s bedroom makeover is just one of the nearly two dozen rooms created through Savvy Giving by Design, a local nonprofit that designer Susan Wintersteen started in December 2014. 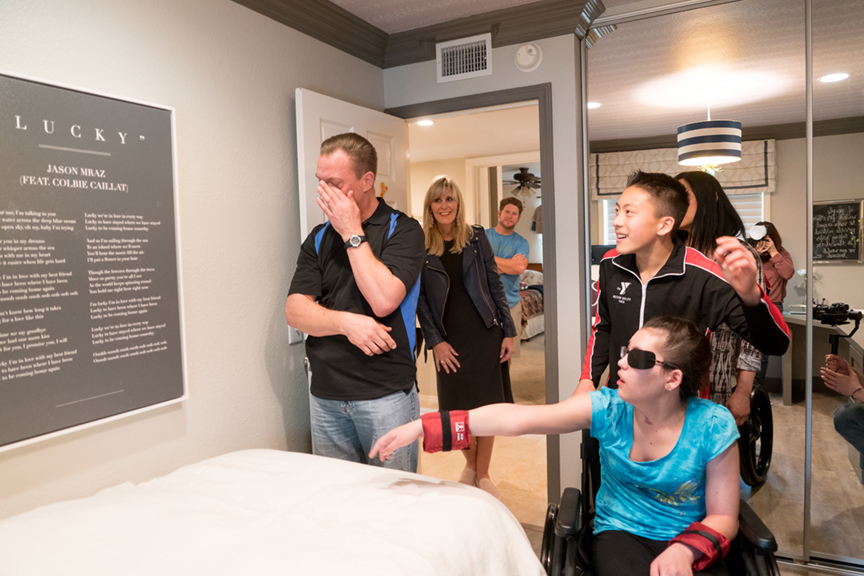 It all began when a friend of a friend’s child was diagnosed with cancer. “A group organized a meal calendar to help the family,” Susan says, “but I don’t cook, so I offered to redo her bedroom.” It was sort of one of those jump-first-then-figure-out-the-details moments.

When her parents agreed to the room makeover, Susan reached out to her Savvy Steals & Deals closed Facebook client group, and set up a GoFundMe page. In just a couple of days, she raised more than $1,500 for the project.

Now, three-and-a-half years later, the nonprofit helps six to 10 families a year—all of whom have children in medical crises—by creating home spaces, at no cost to the family, where the children can heal. (The average makeover costs about $6,500, and siblings get their rooms made over too—just on a smaller scale.)

Kimi was diagnosed with neuroblastoma when she was 4. She endured 18 months of high-dose chemotherapy, surgery to remove a softball-size tumor from her abdomen, stem-cell transplants, radiation and more. She went into remission, relapsed in the second grade and then relapsed for a third time last Thanksgiving. 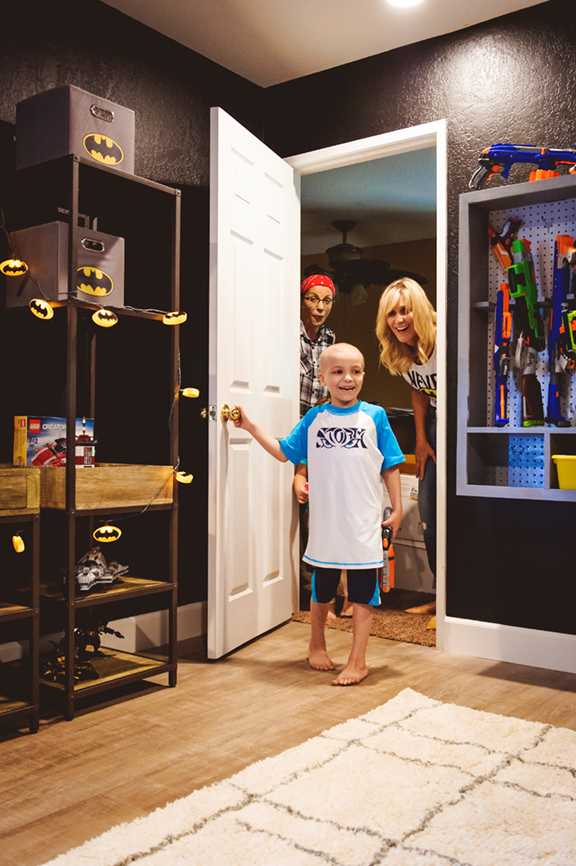 Savvy Giving by Design tries to help kids, nominated by friends and family, at the beginning stages of their treatment.

Susan reached out to Peter after Kelly Mikulsky, one of Kimi’s oncology nurses at Rady Children’s Hospital, wrote a letter about Kimi and her amazing fighting spirit. (Kelly’s own daughter received a room makeover after she was diagnosed with leukemia two-and-a-half years ago.) Kimi’s redo came right before she started treatment for the third time at the end of last year.

Savvy Giving by Design typically changes 99 percent of a space, Susan says. The organization swaps potential allergen-harboring carpet for solid-surface flooring (though in rental situations, like Kimi’s, this isn’t always possible); installs lights with dimmers to make giving medications in the middle of the night less disruptive; replaces mattresses with models that don’t off gas; remodels closets (California Closets provides custom designs for each child); and gives kids new furnishings and decor. But the actual design of the room is 100 percent a collaborative effort.

“When Kimi sat down with Susan for the first time, I heard her talking about Harry Potter, Star Trek, chandeliers and hanging chairs, and I was like, ‘What are you talking about?’” Peter recalls. “But Susan ran with all of those concepts. It’s amazing!” Autumn Escalante, whose children Layla, 5, Lexi, 3, and Aiden, 15, received room makeovers from Savvy Giving by Design, agrees. 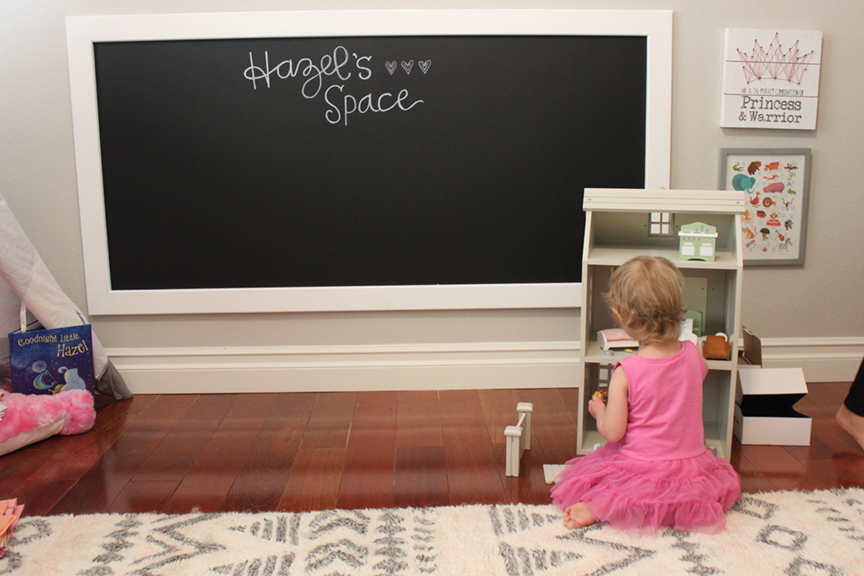 The bedroom with two single beds features a multicolored floral wallpaper, a strand of heart-shaped lights (on a dimmer) that hang over the girls’ beds and a rack of princess costumes and a vanity for dress-up fun.

“As a parent [with a sick child], you sometimes become complacent; you’re just trying to get through the days,” Autumn reveals. “To let Susan help my kids dream and get excited, I am just so grateful.”

Peter says Kimi’s room makeover has been as much a comfort for him as it has for her. 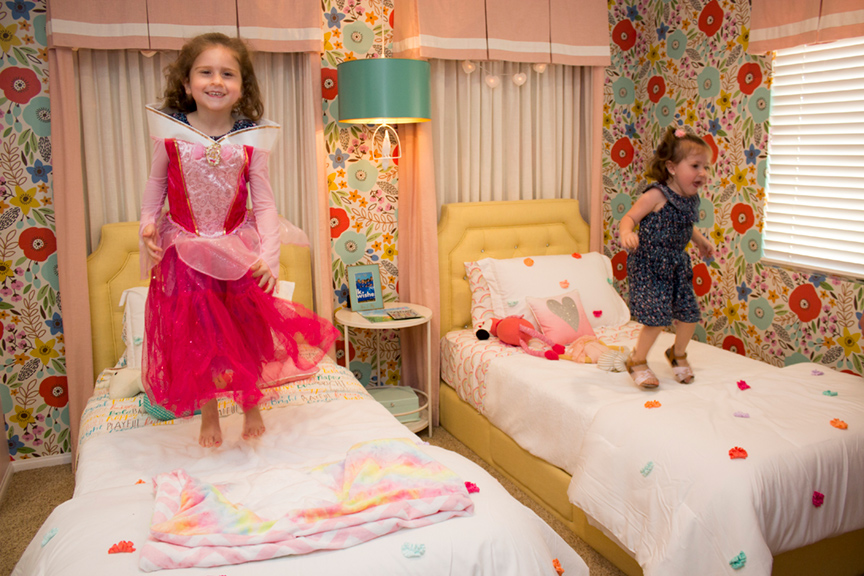 “Coming home after her first round of chemo this time [in November], knowing that she had this peaceful, magical space of her own to come home to was such a blessing,” Peter says. “It’s this sort of oasis of healing.” Now, Susan is on a mission to help more kids like Layla and Kimi. This year, Savvy Giving by Design is expanding. In March, Susan launched a pilot program in Mobile, Alabama, and at press time, she was working with like-minded designers in Florida, Rhode Island and Georgia (to give the organization legs there) and actively looking for chapter leaders in other states. “The families that benefit from these room makeovers have medical bills and other finances to worry about and wouldn’t otherwise be able to do this for their child,” Susan says. “My goal is to have Savvy Giving by Design everywhere so we can help kids and their families throughout the country.”

What can you do to help?

Make a donation through the website savvygivingbydesign.org, volunteer, fundraise or participate in Fund-a-Needs, a program that lets people donate and purchase specific items the organization needs for each room. “Maybe it’s a pillow from World Market or sheets from Pottery Barn,” Susan explains. “People can buy it and see exactly where their donation goes. It’s hugely helpful.”

Buy a ticket to one of the two functions at next month’s Dine for Design events, a cocktail reception and an industry-only designer luncheon.

“And somebody give me a celebrity endorsement,” Susan laughs. “I need Ellen [DeGeneres] to help me start a nationwide movement with Savvy Giving by Design.”