The rustic chain-lettered sign reading “Wagon Wheel Ranch” at the entry to Mike and Patti Gollong’s home harkens back to the early 20th century when avocado groves blanketed parts of Leucadia. When the couple moved there in 1975, 30 declining avocado trees covered the property where pioneer rancher and land baron Anton van Amersfoort spent the last years of his life. “We wanted a place near the beach, and this was what we could afford,” Mike says about their decision to purchase the neglected, 1930s-era cottage then encircled by waist-high weeds. “We knew it would take a lot of work, but we were young,” Patti adds. “Plus, I felt a cosmic connection that this was where we were supposed to be.” 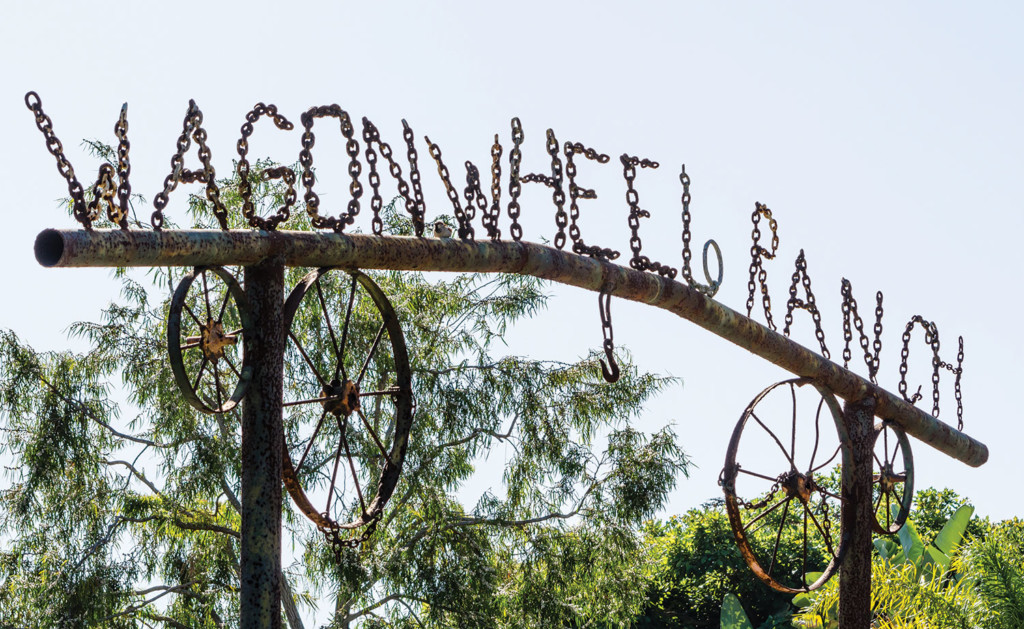 A rustic sign at the entrance to the Gollong property dates back to the early 1900s when it was one of many avocado ranches in the seaside community.

In the ensuing 43 years, while raising a son and daughter, the hands-on couple upgraded wiring and other underpinnings for a two-story home with views north over Batiquitos Lagoon. A major makeover nine years ago replaced the original redwood with modern siding and drafty windows with red-framed, dual-pane models. All the while, Mike, a semi-retired contractor, and Patti, a graphic artist, retained original Craftsman and cottage details inside and out for a look they fondly call “Leucadia eclectic.” The landscape also reflects their long residence, as well as growing concerns about water usage. “The garden has evolved many times—enormously,” Mike says. “Today it’s the sum of iterations big and small over the years.” Early on, as the avocado trees stopped producing and died, Patti trained her artistic eye on the garden, clearing weeds to plant edibles. 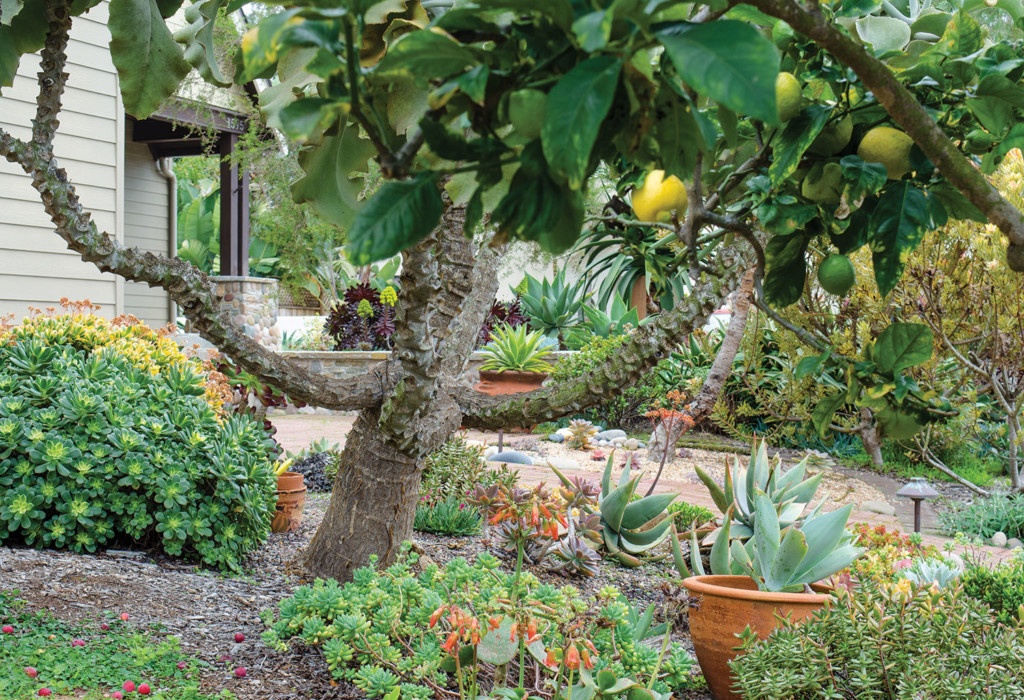 A succulent garden tended by the Gollong’s daughter when she was young circles the spiny trunk of felt plant. Nearby is a lemon tree, one of several citrus varieties grown on the property. • A silver ‘Jester’ leucadendron cone nestles below stems of showy pink, green and cream foliage.

“I had so many vegetables, they gave me nightmares,” she recalls with a laugh. “But in the process, I realized I didn’t know what I needed to know to design the garden.” By chance, a subcontractor introduced Mike to Encinitas landscape architect Greg Stone. Their friendship blossomed; and by the early 1980s, Greg and his associate, landscape architect Kirsten Larson, tackled Mike and Patti’s garden for the first of numerous times over the next 30 years. In the enclosed backyard, Greg designed a “kidney bean-shaped track” around a trio of lacy peppermint willows that delighted the couple’s kids then and entertains their two grandchildren now. A recently expanded deck outside the living room captures a bird’s-eye view of the lagoon, thanks to Mike’s decision to replace cedar fencing at the property’s edge with chain link. The front yard—a mountain meadow of turf dotted with coastal redwoods—languished, as droughts occurred every few years into the new century. 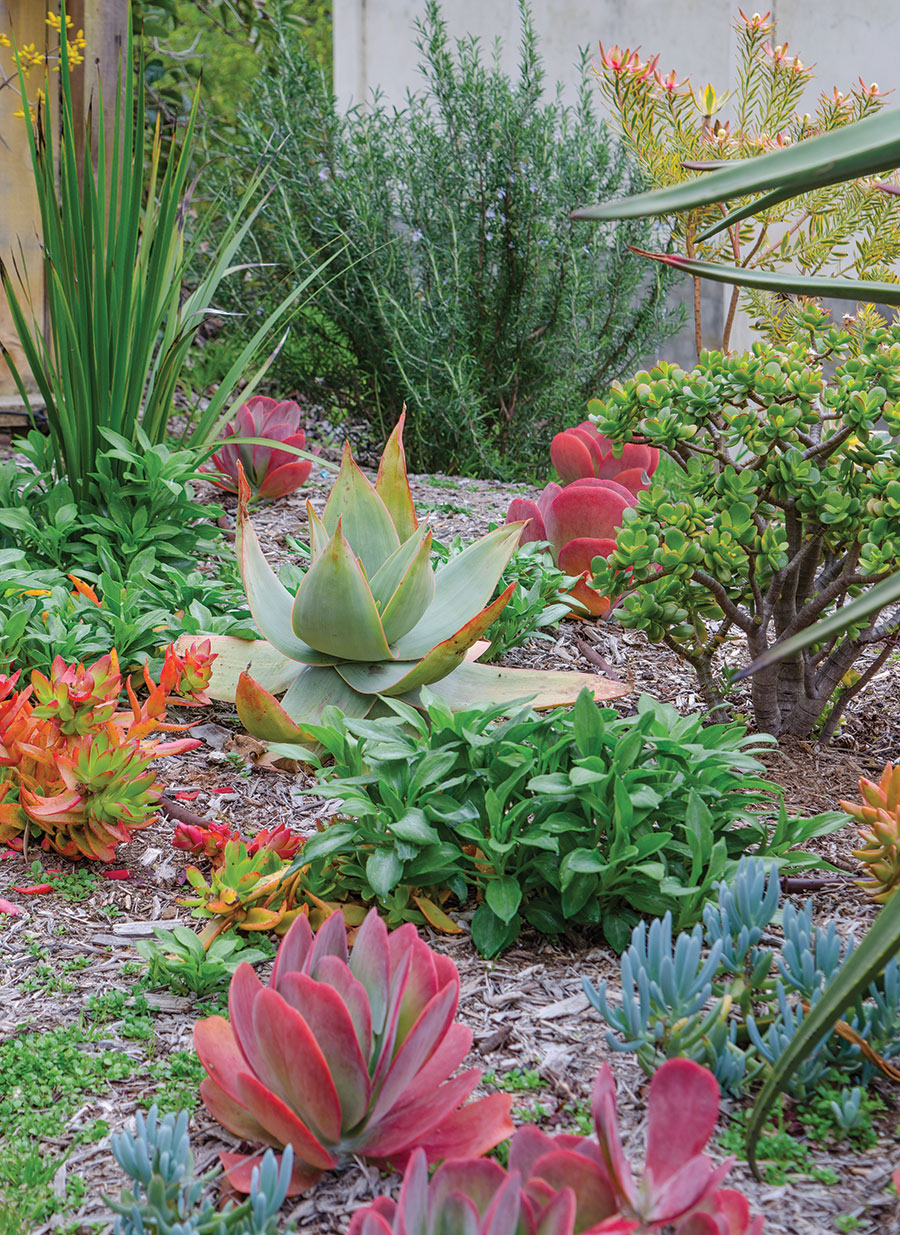 A side garden reflects the eclectic plant mix of the front yard. Included with ‘Campfire’ crassula, coral aloes, paddle plants and other succulents are kangaroo paws, rosemary and ‘Jester’ leucadendron.

The drumbeat for lawn replacement grew louder too, underscored in Mike and Patti’s household by their daughter Laurel, who was pursuing a career in landscape architecture. “Water was increasingly an issue,” Patti says. Inspired by a succulent bed that Laurel designed in their front yard and visits to some of Greg’s water-wise projects, the couple embarked on a garden make overin 2010. “Clients often were reluctant to use succulents, even though we’d always suggest them,” Kirsten says. “It was great to have Patti and Mike request them.” Today, curvy concrete pavers that Greg designed like puzzle pieces form a walkway from the street to the front door. Along the way, fountain grasses, weeping peppermint willows and a frontage road screen of lavender starflowers and Arabian lilacs dance in the fresh ocean breeze.

Farther up the path, the bold colors that Patti loves blaze in the red, green and white foliage of ‘Jester’ leucadendron, gold-flowered Mexican marigolds and the coral spires of “Patti’s aloe,” an unidentified variety originally planted by Laurel and now rooted around the garden. Rearing up among them are tall ‘Goliath’ aloes, their long limbs swirled like Seussian sculptures. Below are fingers of blue senecio; ‘Blue Waves’ ripple jade; and jaunty, multistemmed burgundy and black aeoniums. 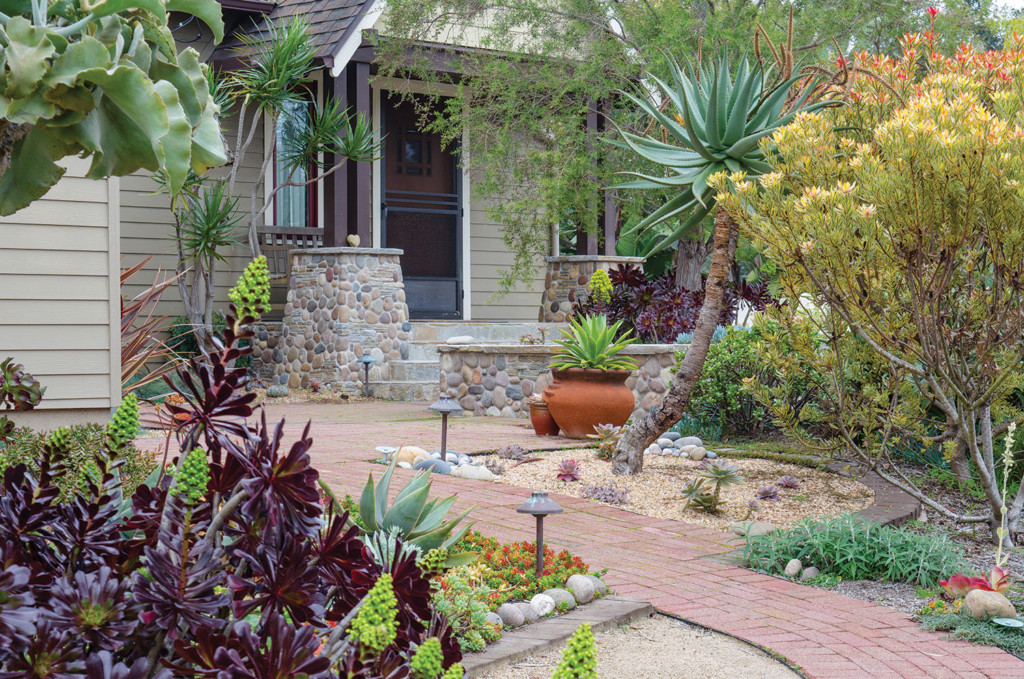 A side yard mixes lion’s tails, sages and other perennials with succulents. In the mix are ‘Goliath’ and coral aloes and red-tipped paddle plants. • A flagstone path is guarded by one of the garden’s sculptural ‘Goliath’ aloes. Across the path is an Arabian lilac. • Flower spires above bold bear’s breech foliage frame gleaming rosettes of ‘Purple Moon’ aeonium. 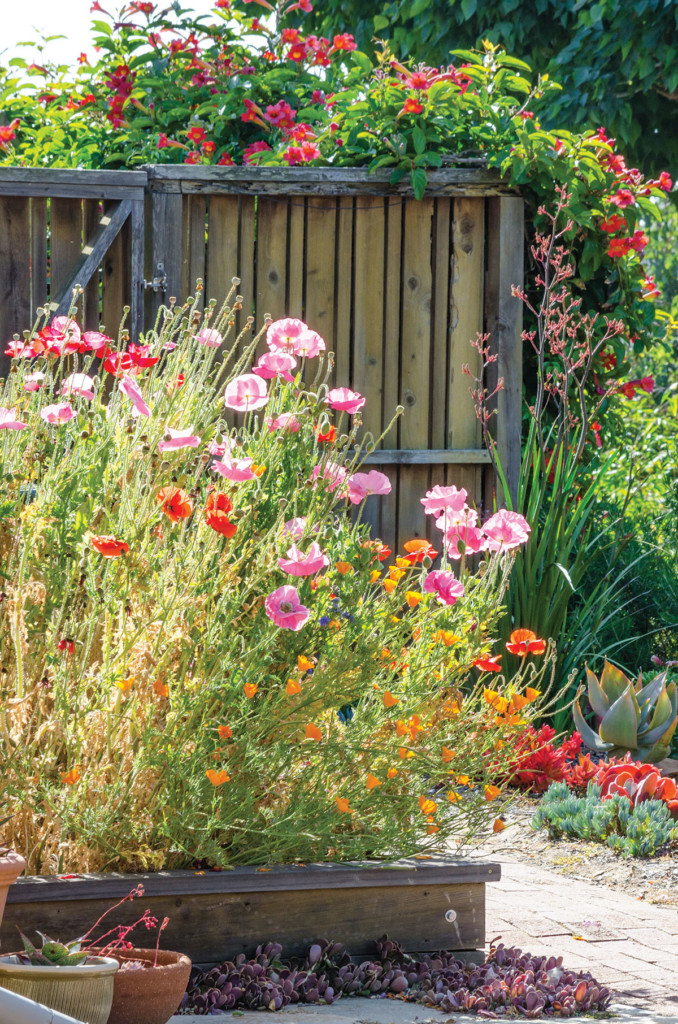 The corners of this and other planters around the garden hold Patti’s “curated rock collection,” picked up during nightly walks with Mike to Ponto Beach. The couple’s latest makeover, with help from Emma Almendarez and Linda Fox of Leucadia’s Glorious Gardens Landscape, repopulated a bed after a row of ‘Silver Sheen’ pittosporums succumbed to borers. Orange-flowered lion’s tails and Mexican sages mix with succulents gleaned from around the garden. “How easily they are propagated and shared is one of the great things about these plants,” Patti says.