A Waterwise Garden That Wows

For more than a quarter century, Patrick Anderson has been fine-tuning the climate-appropriate Fallbrook garden he shares with spouse Les Olson. Patrick, a bass-baritone opera and choral singer, volunteers at the Huntington and San Diego Botanical Gardens, and many of his mature, low- or no-water specimens originated at plant sales he’s helped expedite.

A terraced entry is the only part of the garden “that had to be put down on paper,” Patrick says, “because it required construction of walls, planters and gates.” Sage green stucco, umber-colored metal gates and tan-orange hardscape hint at what’s to come. 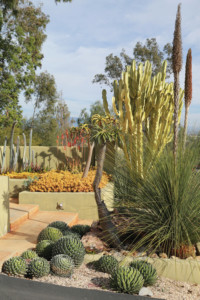 Patrick often uses structures as backdrops for dramatic, sculptural succulents, and one of his signatures is painting vertical surfaces unexpected hues. Among the garden’s vignettes, for example, is a free-standing block wall, cobalt blue, that frames bright orange aloe flowers in winter.

Patrick credits aloes—succulents from South Africa—for inspiring his use of orange as an accent. The color “took on a life of its own and became an overriding theme,” he says, adding with deadpan humor, “not only of the garden, but pretty much everything I wear now.” Sure enough, like Aloe ferox, a succulent tree with 2-foot-tall, cylindrical flower spikes, Patrick is easy to spot amid the greenery.

As with any good garden, pathways create a sense of adventure. Large agaves, dasylirions, euphorbias and nonsucculent trees such as Brazilian peppers, melaleucas and Mexican fan palms partially conceal what lies beyond.

The voila moment for many visitors is glimpsing the main focal point: an inviting, open-sided, 15-foot-square outdoor room. It is both destination and, situated at the highest point, mirador. 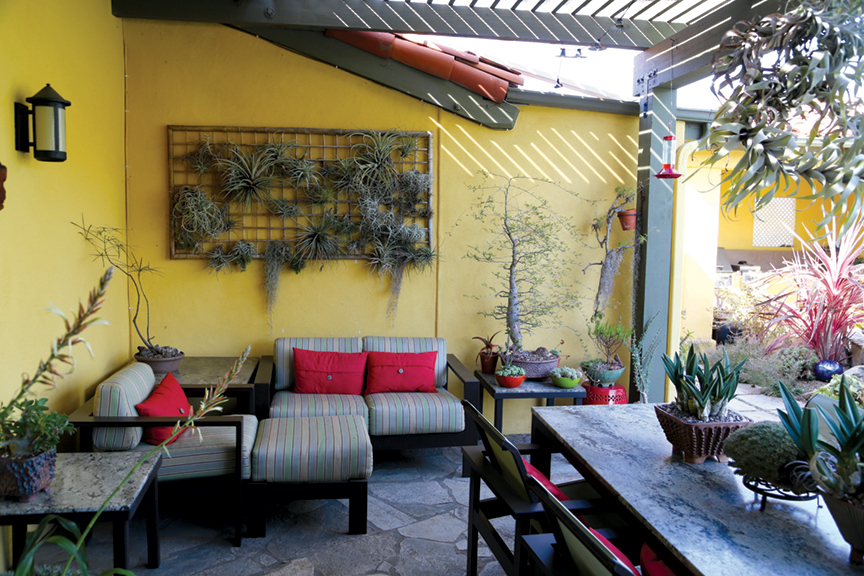 A display of tillandsias (air plants) adorns a wall above furniture accented with orange throw pillows.

Throughout the garden, waist-high unplanted pots and metal sculptures enhance sight lines and serve as discoveries. 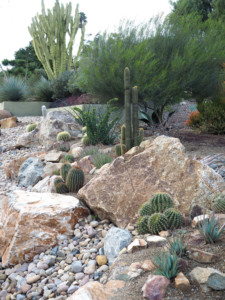 The latter range from imposing to airy and are mostly abstract. Perhaps most memorable is a 4-foot-diameter sphere comprised of C-shaped metal pieces, around which Patrick planted aeoniums. These circular succulents with flat, overlapping green leaves suggest giant green daisies.

Patrick’s use of rocks is as practical as it is pleasing, and is especially evident in the narrow, 300-foot-long streetside garden he installed in 2015. Boulders, cobbles, gravel and decomposed granite comprise natural berms planted with cacti and natives that survive on rainfall alone.

“In my view, it’s impossible to have too many boulders in a garden like this,” he says. “They provide the perfect natural frame for the plants I love, as well as a wonderful textural contrast.”

The streetside strip has no irrigation. “It was important to me that plants should be able to survive without any supplemental water once established,” Patrick says. Also, being visible to passersby, “the area illustrates how truly interesting a xeric garden can be.” 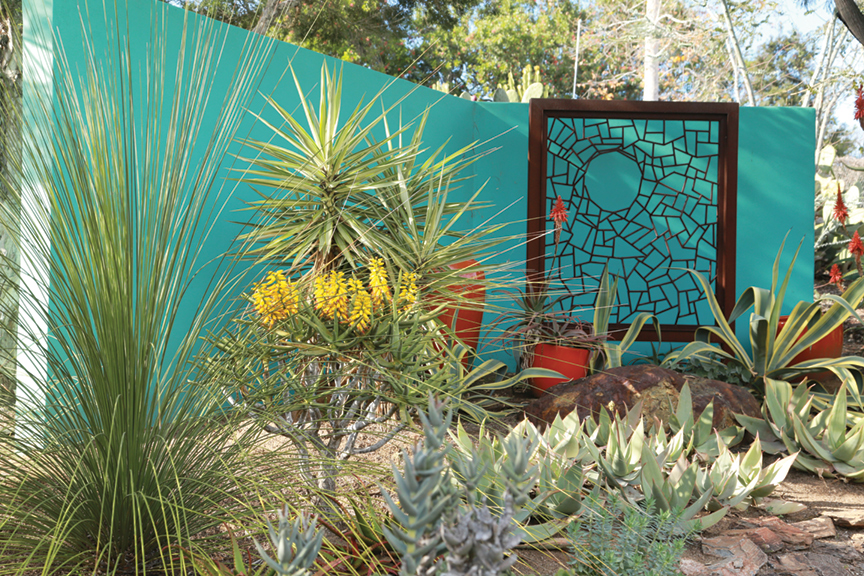 Aloe dichotoma is the focal point of a terrace bed that includes blue ceroids and orange stonecrop (Sedum nussbaumerianum).