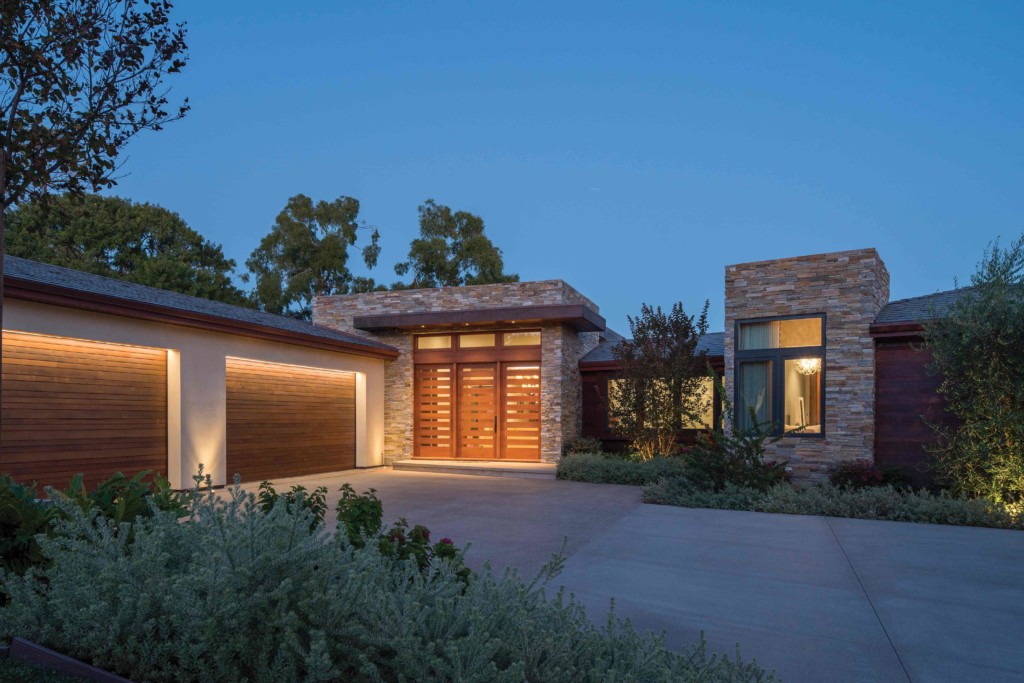 Architectural elements on the front of this home, remodeled by Inplace Studio, were squared off and refaced with Nevada stacked stone. The horizontal wood used on the garage doors and front doorway hint at the strong lines used throughout the property.Photography by Gary Payne

There was already a lot to love in this 5,000-square-foot La Jolla home: It had the right amount of space and privacy for a busy family of five on two acres of prime ocean-view real estate. What it lacked were the high-end finishes and family-tailored floor plan the homebuyers really wanted. La Jolla-based Inplace Studio owner and designer Alison Dorvillier helped her clients select the property with an eye toward what it could become.

“They wanted an easy-to-live-in family house.” Alison says. “It needed to be flexible. They wanted areas for junk, for kids to do homework and to play music.”

With the help of general contractor Tony Parker General Builders in Poway, Alison created a concept for the home that played up its best attributes, starting with an existing redwood beam ceiling that curves up to a grid-paned skylight. With the property’s sweeping views, that room was originally the home’s living room. It became the new master suite with a private patio for yoga, an ample master bathroom and a grass cloth-covered wall that separates an LED-lit bed from his-and-her mirrored closets. 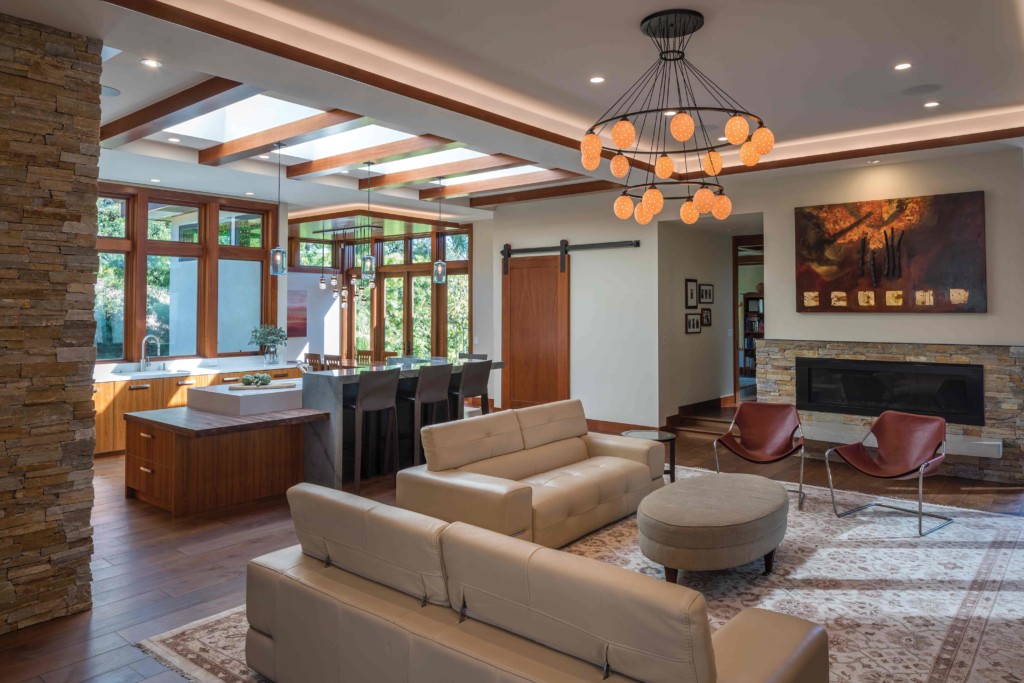 The focal point of the great room is a chandelier comprised of 16 ostrich eggs. Natural elements in the open floor plan include Nevada stacked stone around the fireplace, teak kitchen cabinetry, countertops of wood, natural stone and quartz, and wood flooring.

As a living room it was beautiful but the space was “a mile from the kitchen” in the previous floor plan, Alison says. She reconfigured the home to create a more dramatic entry, flipped dining and office spaces, devised a children’s wing with three bedrooms and a separate playroom, created a soundproof music room, and designed desirable back-of-house amenities like a laundry room, pantry and mudroom just off the four-car garage. The home’s original footprint is largely intact. In fact, the home’s angled orientation on the lot and slight changes in elevation intrigued Alison from the start.

“That angle gives it a little bit more of a whimsical feel,” she explains. 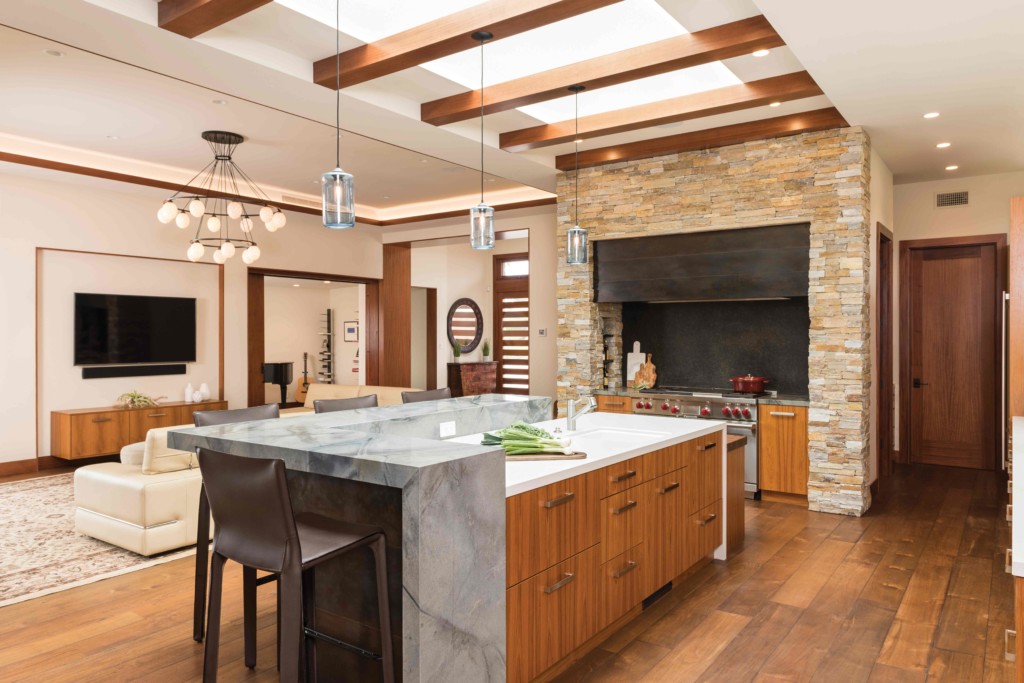 The skylight above the kitchen has new wood beams that visually tie into wood used throughout the remodeled home. Nevada stacked stone contrasts with the metal hood over the stove. The change in countertop elevation gives the homeowners a breakfast bar and meal prep surfaces.

The remarkable wood ceiling in the now-master bedroom inspired similar reddish-brown wood tones and geometry throughout the remodel. Horizontal lines of wood reverberate from the slatted exterior gate, garage and front doors to the beams above the new kitchen and the pivot-hinged entry door to the master bedroom. The stripes of tropical wood grain in the home are purposeful and striking. Teak kitchen cabinetry plays against a wooden countertop and wood flooring. The coffered mahogany ceiling in the office complements mahogany-framed windows.

“I like all of the woodwork. I like how it gives continuity to the house and it gives it character,” Alison says. “A lot of times when you build a new house, you don’t get a lot of character right away.”

Originally built in 1958, the home had undergone at least two previous remodels. Alison describes the last design as “Tuscan modern,” while the new look blends elements of Craftsman, Asian and modern architecture. Natural, textural materials in neutral colors repeat throughout the design. Grasscloth covers a long hallway and the wall with the bed in the master suite. Nevada stacked stone surrounds the fireplace, the oven and range and the exterior of the home’s front entry. The new roof is slate. And the bathrooms mix stone surfaces include travertine walls, quartzite counters and limestone flooring. Skylights, clerestory windows and glass doors bring in lots of natural light, complemented by statement-making fixtures. The playroom includes three bubble pendant lamps, and the living room has a chandelier with lampshades fashioned from 16 ostrich eggs. 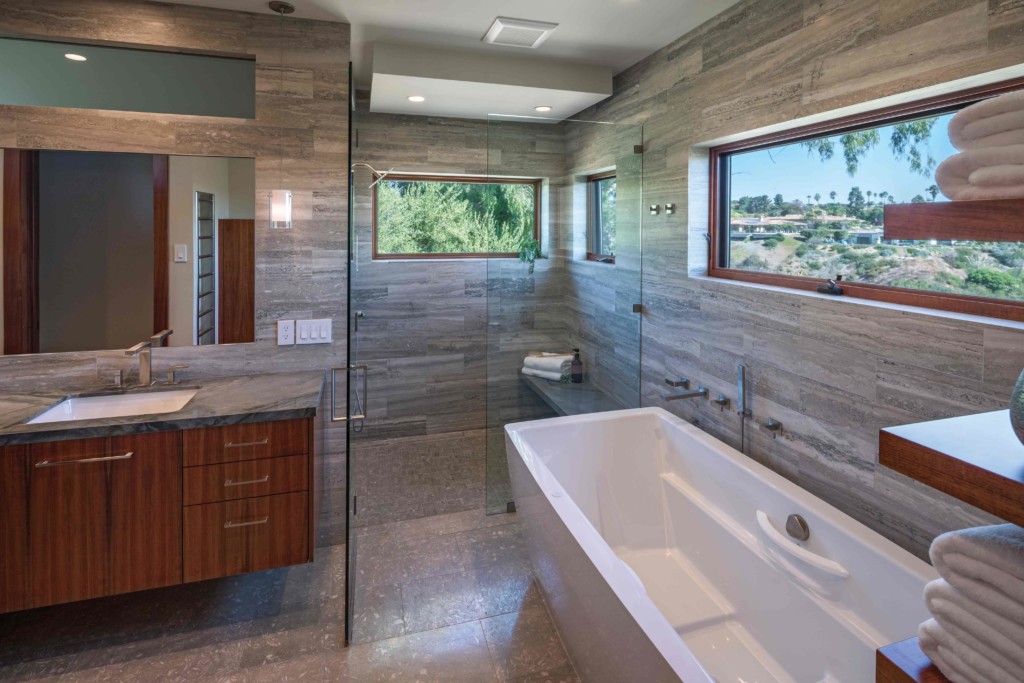 The home feels even bigger than it is because Alison employed some visual tricks. She raised ceilings whenever possible but used a drop ceiling above the dining room table for coziness. A narrow passageway to the kids’ bedrooms has more elbow room thanks to a bay window that pushes the wall out by one foot. “It gives enough dimension to the space that it doesn’t feel like a little, squished hallway,” she says. Alison added more doorways to the outside so the homeowners can easily enjoy some of the property’s existing amenities, including a swimming pool, putting green and canyon pathways. The 15-month remodel process went relatively smoothly, Alison says, particularly because the homeowners knew what they wanted and made decisions quickly. The task also played to Alison’s strengths: substantial interior remodels that give outdated homes a needed facelift.

“I like the floor plan, the way it flows,” she says. “I like this house and as far as I know, they’re happy here.” 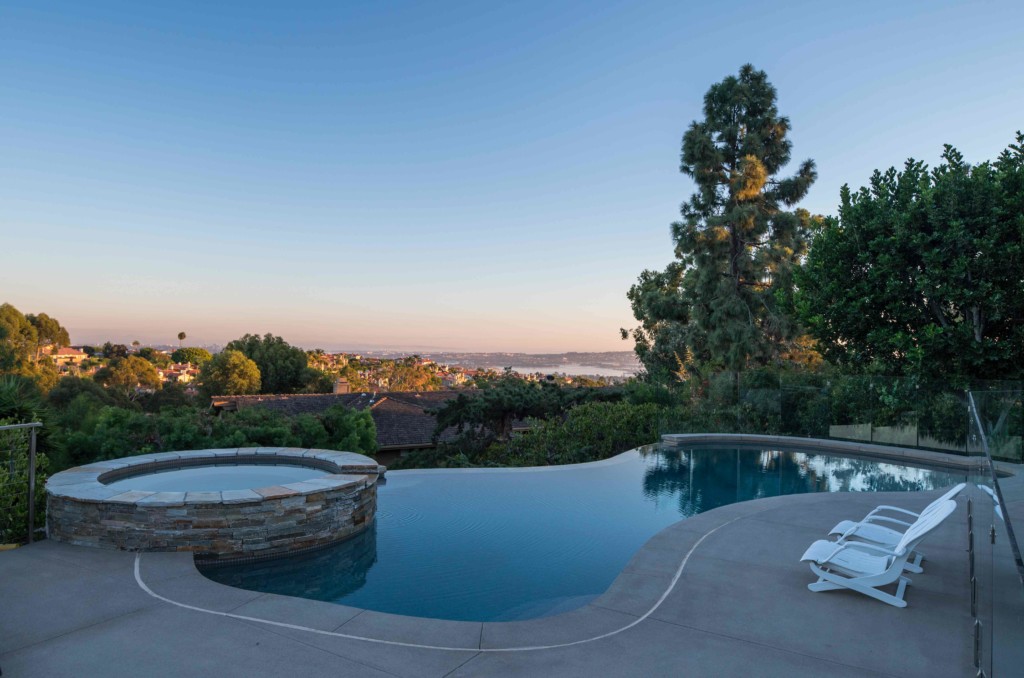 The evergreen landscaping at the La Jolla home complements its poolside views.

Categories: Home Design, Home of the Year
Share this...