An architect creates a view-filled gem on a sloped lot

Site surveys, backhoes, loaders, rammers, staging areas, fill dirt, storm-water retention, retaining walls. Building a 6,000-square-foot house on an incline takes careful planning and lots of moving parts. But architect Mark Morris of Oasis Architecture & Design, who conceived this 2018 Homes of the Year winner, says that working on the project was “kind of fun.” “The Encinitas property on which the house is built is 260 feet long, twice the depth of a normal property and 50 feet wide,” he says. “It goes 50 feet up toward the back, so it’s sloped aggressively from the street to the back of the lot. Encinitas has a 22-foot height limit, about half the height of the property. So, you have to step the property to build on it.” 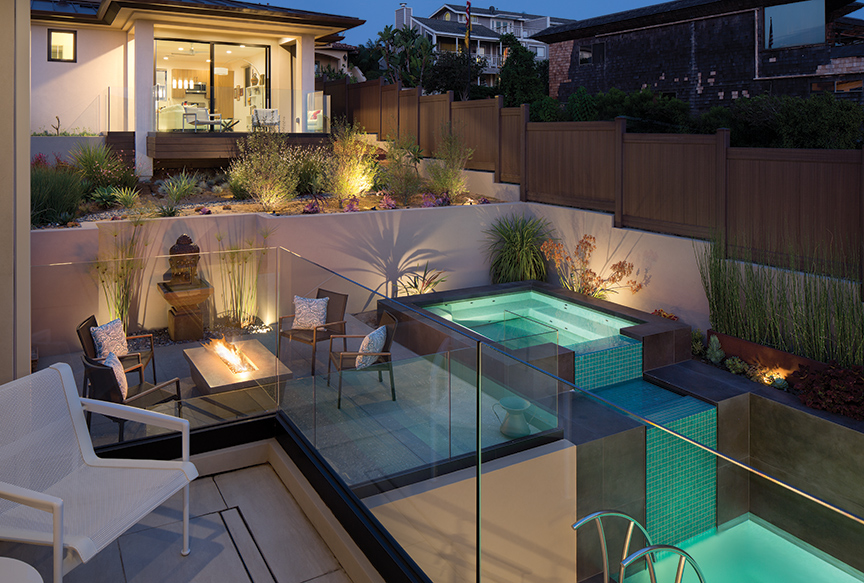 As a happy result, a terraced concrete walkway creates a cascading waterfall effect to the front of the house. Horizontal projecting roof planes with wide overhangs stagger down the site, adding a sort-of Frank Lloyd Wright-ish prairie-style appeal. But the spirit of a contemporary California vibe prevails with walls of windows and sliding-glass doors on each level that flood the home with natural light and capture Pacific Ocean views. “We told Mark that we wanted to have a modern representation of the [Edward E.] Boynton Frank Lloyd Wright house in Rochester, [New York]” homeowner Rick Crowell says. “If you take a look at the Boynton house and look at our house you see similarities.” “PBS did a special on that house,” Rick’s wife, Dana, continues. “We told Mark, ‘This is the idea and this is what we are thinking for our house.’ And he got it completely. It was definitely a challenge but he enjoyed that.” 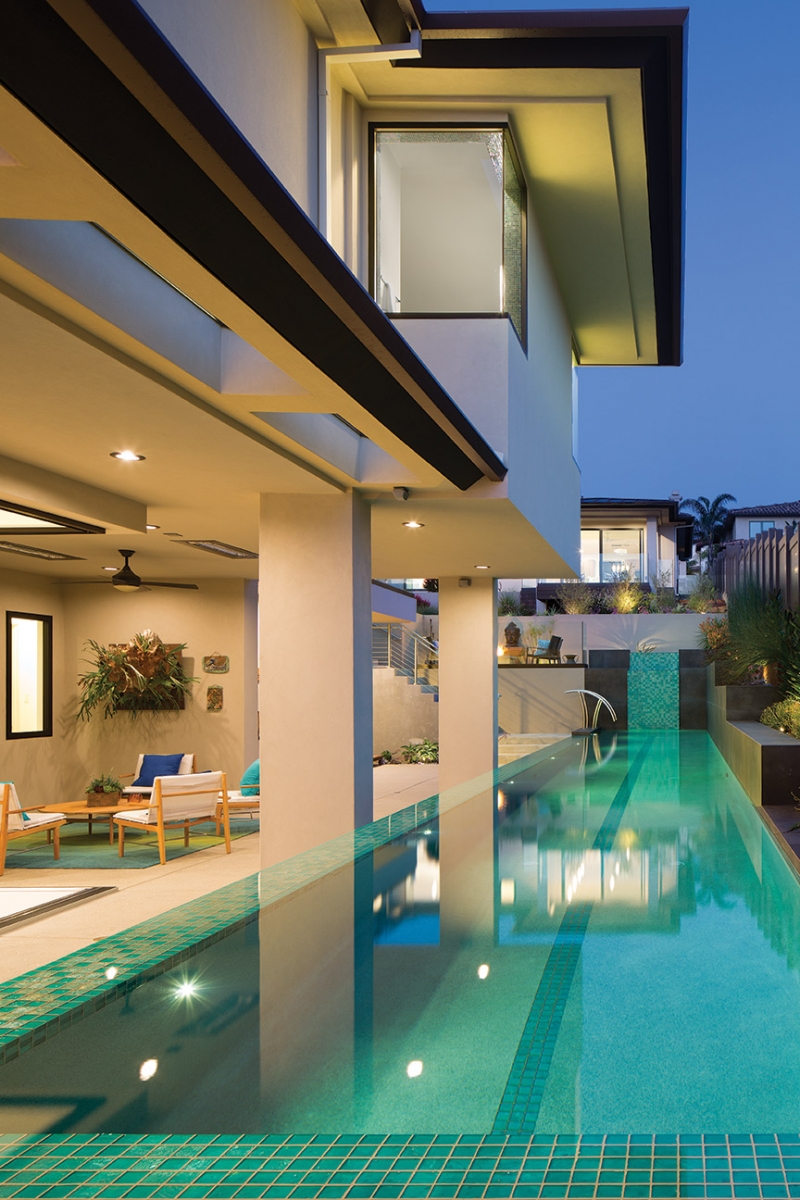 Along with asking for an architectural gem, another request was thrown in: Could they get unobstructed views going all the way through the property from front to back so that the master bedroom, office, living room, kitchen and guesthouse in the rear each had an ocean panorama? “Mark was very successful in fulfilling that criteria,” Dana says. “It’s remarkable how the house perfectly lines up with the view.” The sea’s influence on the beach-themed interiors begins at the front door’s Caribbean blue-hued glass. Inside, wood floors resemble driftwood, tile floors look like sand and aqua accessories remind one of the ever-present ocean. But it’s the main level’s open floor plan that maximizes views and flows out to terraces that strikes visitors. To reinforce the architectural design on the interiors, Rick and Dana brought in Anita Dawson of the Dawson Design Group. “The majority of our work was developing the design from the architect, selecting finishes and cabinetry and reconfiguring things to make the house function well,” Anita explains. “The homeowners made the interior palette and chose a lot of the furnishings on their own.” 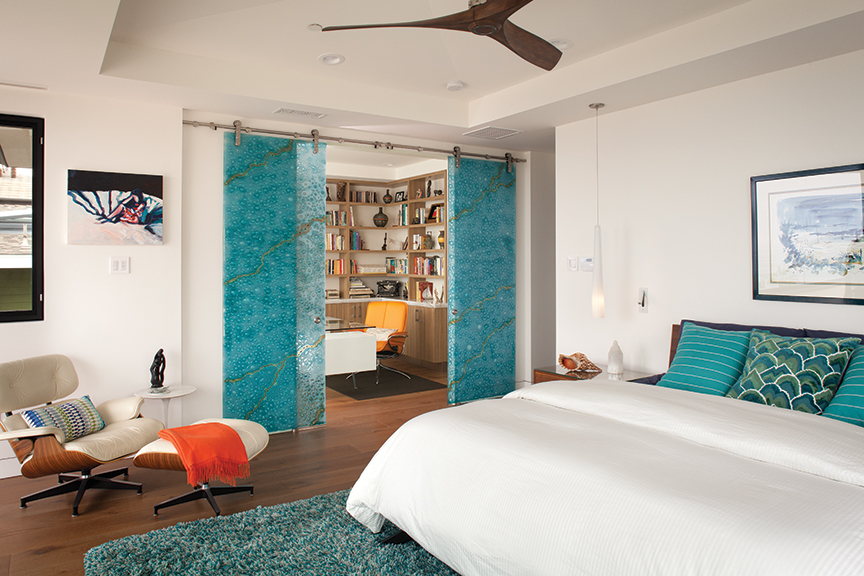 A priority for Anita was pulling in the strong horizontal architectural lines. This is particularly evident in the living room’s fireplace, which travels along a feature wall grounded by a dark hearth, warmed by wood display shelves and given drama with large-format porcelain tiles. Throughout the house, the look is modern without appearing stark. In essence, the home has three levels—a garage on the first; living spaces, a bedroom-and-office, powder room and laundry on the second; and an office, master bedroom suite and guest bedroom and bath on the third. “Technically, it is a three-story house,” Mark says. “But the city of Encinitas doesn’t allow three-story houses so, through the use of a series of stepped terraces, at no point is it three stories.” Inside, there are two elevators—one at the garage and one at the master suite—and, miraculously, only one set of stairs. “At one point, we selected an architect who came up with concepts we liked—except for the amount of stairs that took you to different levels,” Rick says. “We didn’t want two steps down into the living room and two steps up into the dining room,” Dana continues. “We wanted a seamless floor, with a kitchen flowing out to the living room and a deck.” 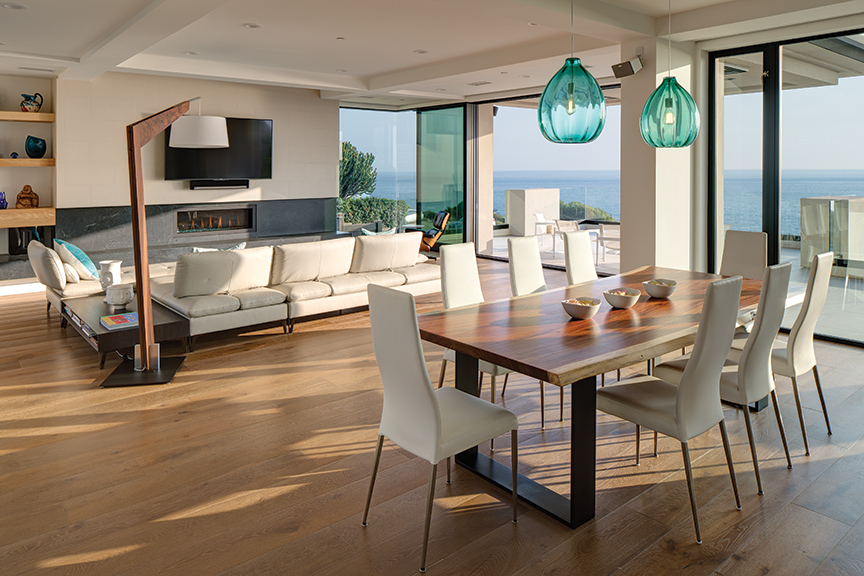 The living room terrace that fronts the ocean provides the perfect spot for enjoying Rick’s craft cocktails. As the breeze picks up, a covered outdoor media room and barbecue area off the kitchen provide shelter from the wind. This space behaves like a family room—“Dana and Rick use it all the time,” Mark says—and it has the extra bonus of neighboring the pool.“Designing a 60- to 70-foot lap pool for a sloped lot was another challenge,” Mark says. “To keep it from feeling sunken, we raised the pool two feet and put a spa above it on top of the retaining wall. The spa drops water down into the pool like a water feature. When Rick and Dana open the pocket doors by the kitchen, they can enjoy the tranquil sounds of moving water throughout the house.” Infinitely livable, the residence feels at home tucked within its hillside surroundings. Rick surfs so it seems like serendipity that the front deck looks out onto two well-known surf areas—Swami’s and Pipe’s. “I can check out the surf, watch the cars go up and down the highway, see people walking by,” Rick says. “Believe it or not, it is fun to watch the lifeguards and fire trucks and trains. When we lived in Rancho Santa Fe we saw squirrels and rabbits. Now we are in the center of everything.”