Looking Up: Four Kitchen Designs Tap Into The Ceiling 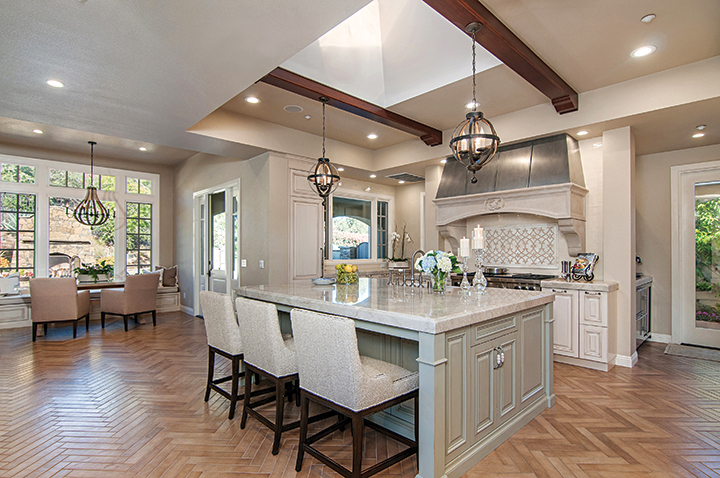 Hints of butterscotch gold dapple a Santaluz kitchen redo with creamy delight. Designer Cheryl Hamilton-Gray transformed the 17-year-old, cherry-dated space into a bright, happy room. The new design meshes with the remodeled home’s nod to a traditional California Mediterranean theme. But perhaps more important to a homeowner who relishes chef’s duties, the facelift added function —and light. “I love to cook,” Alison Nutt says. “I cook dinner for my family every day. I enjoy being creative with food, and I change the menu up constantly. I also do a lot of entertaining here and love to figure out recipes and watch people’s reactions when they get a good meal.” Before Cheryl came along, however, Alison was whipping up delights in the dark. During the day, she managed with the help of an expansive skylight over the island. At night, visibility for food preparations was a different story. “That skylight looked like a big hole in the ceiling,” Cheryl says. “To make it more aesthetic, we restructured soffits to center it. Then we flanked the skylight with corbelled beams that echo similar beams running throughout the home. The beams added character to a bland ceiling opening and allowed strategic pendant placement to provide island illumination at night.” 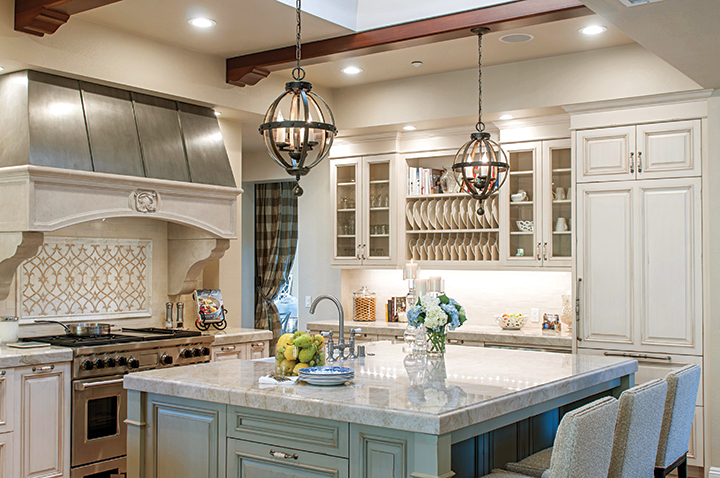 Carefully calculated, the soffit redesign also “lands” the posts that Cheryl used to embellish the cooktop area—a kitchen highlight behind the furniture-like island. “That’s the pièce de résistance,” Cheryl says. “We redesigned the architecture around the hood to highlight the pewter shaft and provide a recessed backsplash area, which we tiled throughout. We added a simple geometric marble mosaic in coordinating colors above the four-foot range.” “The new industrial-style range with six burners and side-by-side ovens is awesome for someone who cooks,” Alison adds. “We had double ovens before, but they were so small that you couldn’t even fit a cookie sheet in them.” The range got bigger, the refrigerator smaller. The previous, double-sided Sub-Zero appliance hogged much of Alison’s workspace. Cheryl suggested a split with a slim freezer placed on one side of the kitchen and a smaller refrigerator placed across the way. Resembling the new glazed cabinetry, both pieces seamlessly meld with built-in units that organize dishware, pots and pans, chef’s knives, small appliances and a lineup of Alison’s favorite cookbooks. Cheryl worked the new space plan within the confines of the kitchen footprint but reconfigured pantry walls and door access to provide a more practical storage area. A beverage station hides behind the stove wall. A table and built-in bench, placed beneath a long window that looks out to the garden, create a dining area adjacent to the kitchen. To the side of the table, a Dutch door allows ocean breezes to mingle with the delightful aromas of Alison’s cooking. “My latest loves are a vegetarian cookbook and an air fryer, which is fun and easy to cook fish in,” Alison says. She pauses and then adds, “Of course, it goes without saying that I also love my new kitchen. It’s a cook’s dream.”

Drop Down Hang Up
Photography by Alan Smith 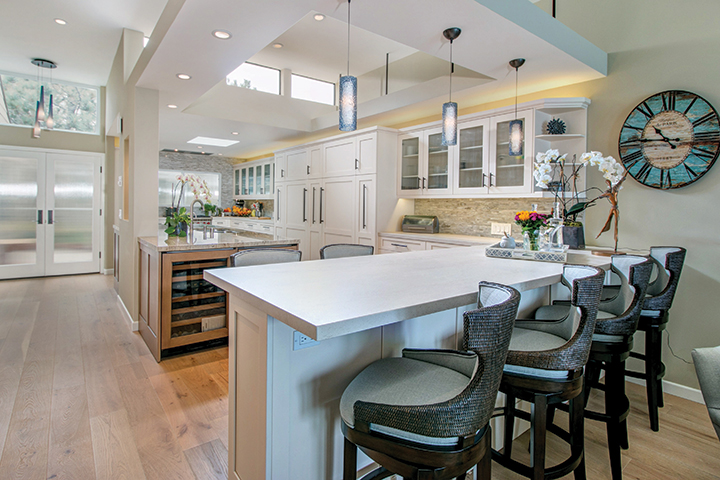 Admitting that he’s gaga for gadgets, homeowner Peter Gruen also confesses that he likes his kitchen tools to be within easy-grab distance, i.e. on the counter. “I’m the opposite of my wife, who would put everything away,” he says. “I like things handy—coffeemaker, Cuisinart food processor, KitchenAid mixer, hand blender, toaster oven, oil container, and salt and pepper shakers all out and ready to go.” Having items easily accessible translates to a lot of counter space that didn’t exist in the couple’s 25-year-old Solana Beach condo. Furthermore, more floor space was needed for bigger, top-of-the-line appliances. For an amateur gourmet chef like Peter, the old appliances that came with the condo didn’t quite cut the mustard. “One of the challenges of this outdated kitchen was that it was too small to accommodate all the latest appliances,” designer Rebecca Soechtig of REDinterior says. “By expanding into the dining room, the kitchen doubled in size. We replaced the dining room with a peninsula that seats six comfortably—four guest chairs that face the cook for ease of conversation and two chairs for Peter and his wife, Monique, that face the ocean. The concept was to make the end of the kitchen facing the living space like an entertainment area with barware storage under the peninsula and two wine coolers under an island behind the peninsula.” The bigger challenge was the disjointed ceiling with a 4-foot height difference between the kitchen and the dining room in a condo where adjusting the ceiling wasn’t possible. “To make it look like one space, I had to find a way to bridge the gap without obstructing the light from clerestory windows,” Rebecca says. “To overcome this hurdle, I designed a hanging soffit that was supported by oil-rubbed bronze rods.” The soffit’s modern appeal echoes the kitchen’s new style, created with a neutral color palette; classic Shaker cabinetry; glass-tiled backsplash; and a glazed, brushed finish on the island counter’s granite. The main counters consist of Dekton, a material that Peter chose for its durability and ease of maintenance and that he now wishes he had used throughout. Despite that, he has no regrets. 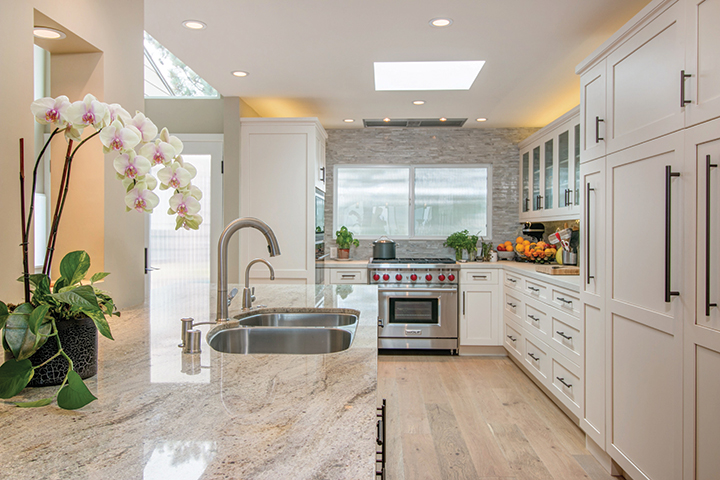 “I wouldn’t trade what I have now for anything,” Peter says. “I have a spacious, somewhat slick but comfortable kitchen that fits into its environment. As I sit at the counter and turn my head east, I’m looking out at Torrey pines. If I look the other way, I’m looking at the Pacific Ocean.” Yesterday, he saw dolphins at play. Today, he is waiting for an espresso machine to be delivered, which will undoubtedly take up more room on the counter. But that won’t present a problem. With all the extra counter space Rebecca procured in her design, there will be plenty of room left for this budding chef to hone his craft.

Pine Away
Photography by Matthew Meier 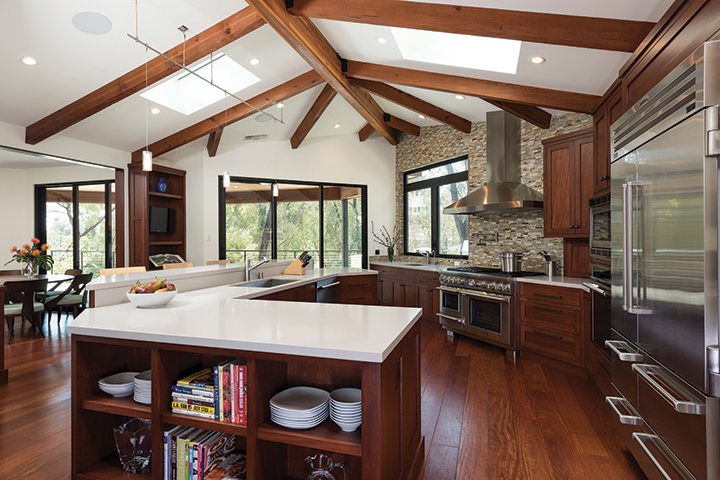 By playing up a La Jolla kitchen’s warm wood tones against a cool white background, architect Ione Stiegler and project manager Sandra Escobedo of IS Architecture mirrored the home’s wooded lot location. Seemingly also taking its cue from the woodsy atmosphere, a ceiling sheathed in pine proved instead to be an over saturation of the material and a drawback. “The pine ceiling absorbed the reflective daylight and darkened the interior,” Ione says. “By switching out the pine with white sheet rock and maintaining original exposed beam work, we got the best of both worlds: the warmth and character of wood along with a maximum of light reflection.” Illumination also spills from added skylights and numerous windows. Kitchen angles presented an opportunity for openings on three sides—to the dining room, the covered eating patio and to the hall and family room—while still allowing enough wall space for a work triangle and a breakfast nook. “The prior design also had a trio of openings,” Ione says. “But each was limited to a 3-foot-wide doorway. Now they are big cased openings: 6-foot-wide access to the dining room, 8-foot-wide sliding glass doors to the patio and a more-than 10-foot-wide entry to the family room.” The new entranceways flow easily from space to space, while a better configuration for the peninsula provides a more direct route to the patio. 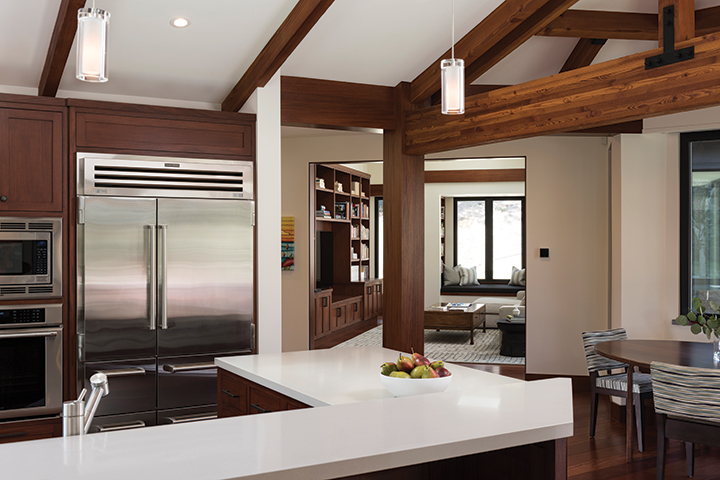 “A fresh, clean Caesarstone was chosen for the countertop,” Ione says, “while a slate-and-glass mosaic backsplash that combines white, gray, tan and brown hues ties the design together by playing to the warmth of mahogany, as well as the light tones in the countertop. “I love that there is a crisp contrast between the wood and the nonwood elements,” she continues. “Among my favorite things are the way the family room now connects with the kitchen and that the makeover allows for views and natural daylight from all sides.” 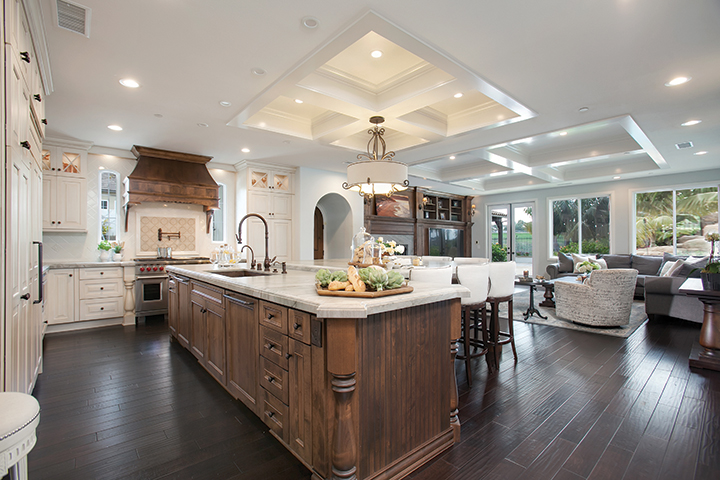 Vacant vastness rather than sumptuous spaciousness defined the cavernous great room in John and Erin Bosman’s Carmel Valley home. Although the open floor plan gave the side-by-side kitchen and living area opportunity for partnership, an inept design caused distance and detachment. “They had this magnificent space with natural light coming in, but the two rooms had no connection at all,” says interior designer Tatiana Machado-Rosas of Jackson Design and Remodeling. “The kitchen was in one corner and the family room was on the other side. The issue was how to unite the two areas without losing that feeling of expansiveness. Coffered ceilings with wide-beamed, simple frames in a four-square motif provided the solution. Their design was in keeping with the sophisticated, traditional look that the homeowners desired. We installed one in the family room and one perfectly centered above the kitchen island.” The generous island clearly defines eating and cooking zones with a raised 7-foot-by-7-foot surface topping a seating area for six and a lower area for prep work. The hoped-for marble top quickly switched to a more durable marble lookalike: a quartzite Sea Pearl slab that gleams in shades of aqua, soft mint, gray and white. Burnished with a rich stain, the island’s alder wood base includes interesting details such as turned legs and beadboard.

“We probably went through 20 design iterations trying to figure out the island,” John says. “Underneath and all the way around it, there are cabinets and drawers that open for extra storage. The island is the centerpiece. I love that I am able to cook and prep and be part of the conversation when we entertain.” Using a diamond-patterned backsplash in a soft cream and hard/rock maple cabinetry painted in a white glaze keeps the kitchen bright while adding contrast with the darker wood on the island and floor. A bold hood, created from the same alder wood as the island, provides a compelling focal point. The wood’s finish echoes the classic copper of the double sinks. “In the remodel, we also transformed a small breakfast room into a bar with a design inspired by a traditional Irish pub,” Tatiana says. “Guests can gather at the bar that’s open and adjacent to the kitchen, sit around the island or get cozy around the family room fireplace. Two sets of doors, one from the family room and one from the bar, lead to the pool. John and Erin love entertaining and have many social gatherings. With this new design, indoor/outdoor parties can happen with ease.”