The Little Brown House That Could

“Little brown house that could” is Dex and Carolynn La Pierre’s nickname for their most recent La Jolla makeover — the third in less than two decades. “We love to design and build,” says Carolynn, a retired interior designer, about the do-it-yourselfers’ move in 2011 to a low-slung ranch house perched high in La Jolla Alta. “I do a sketch and Dex does the building. Ninety percent of what you see here he did.”

She smiles affectionately at her husband of 39 years — a retired advertising executive from a family of professional and amateur builders. “It was fun — mostly,” Dex replies with a laugh, recalling his strenuous labor on walls, fences, decks and more. Homes in this area of La Jolla are limited to one level to preserve sweeping city and ocean views, like those that beckon on clear days from the couple’s back yard.

But Carolynn and Dex wanted “a more commanding, inviting entry” for their home built 45 years ago. They also craved more opportunities to enjoy outdoor living around the almost 1/3-acre lot dominated by a swimming pool, lawn and scruffy trees. 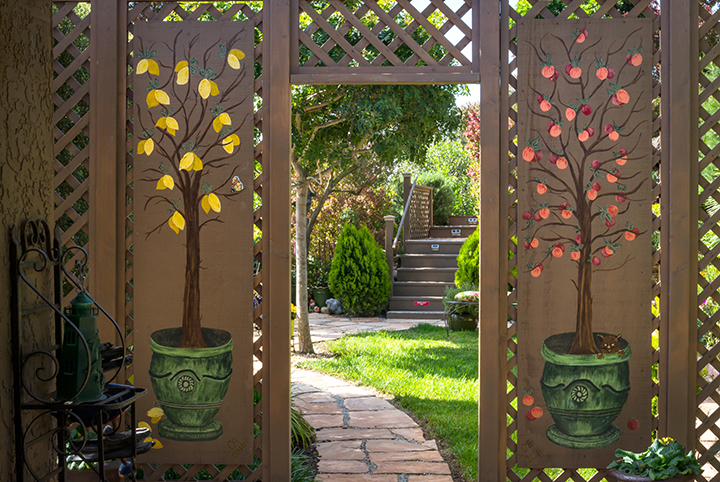 “I wanted something of interest everywhere you looked,” says Carolynn, who envisioned garden rooms front and back to welcome friends and the couple’s blended family. “And I wanted reminders of other times and places that would make us smile.”

Visitors found all that and more when they explored the grounds during this year’s La Jolla Secret Garden Tour. A brick path paved the way through a new courtyard garden to the back yard, now home to a fragrant rose garden, cozy outdoor living room, canopied dining room where fairy lights twinkle, and charming garden accents ranging from iron butterflies to cheerful gnomes. 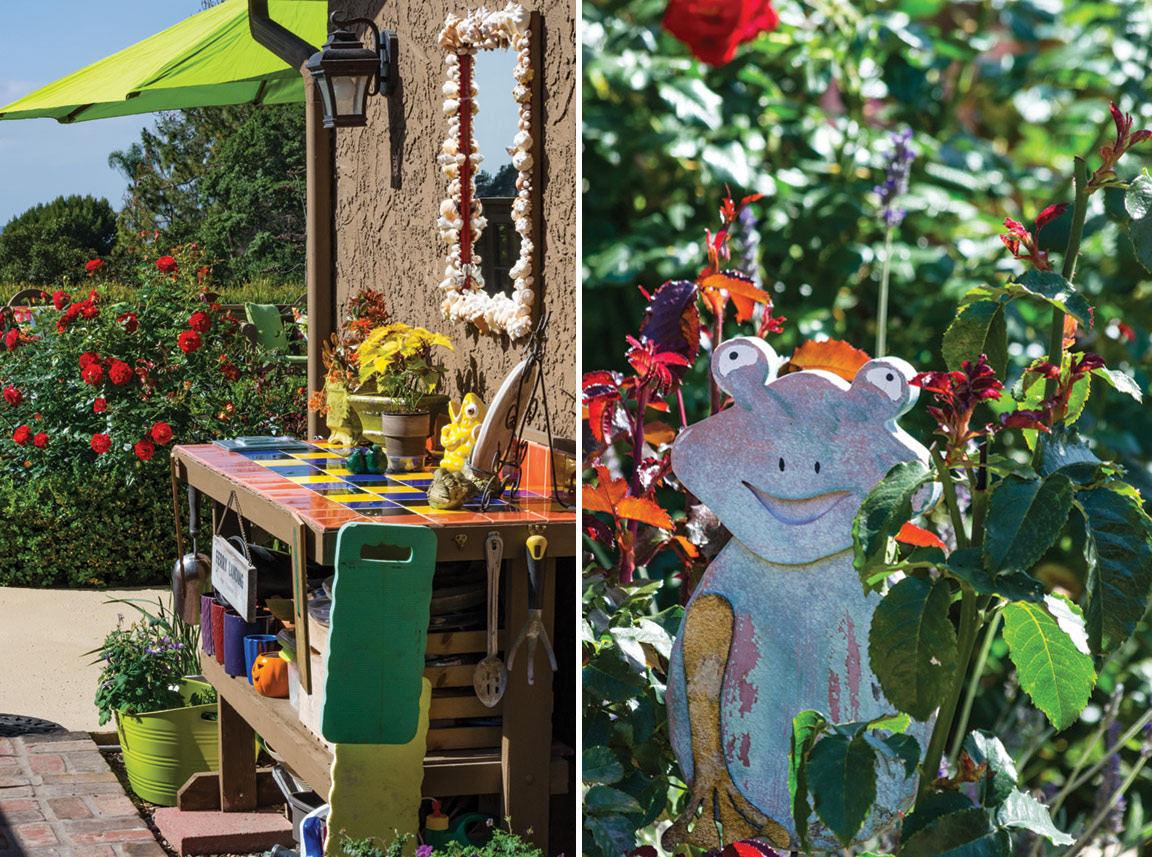 “I believe God chose brown as Earth’s living canvas for the rainbow of colors it beautifully enhances,” says Carolynn, who picked lime green, gold, red and dark chocolate brown for the garden’s furnishings and other décor.

To enhance the home’s curb appeal, the couple constructed a brick-topped stucco wall to seclude a new courtyard garden and front a vibrant streetside border where lavenders, sages, butterfly bushes and other Mediterranean garden favorites mingle.

A tall, arched garden gate adorned with seasonal bouquets adds to “the feeling that you’re about to discover something surprising and magical,” says Carolynn, who is active in The Village Garden Club of La Jolla. 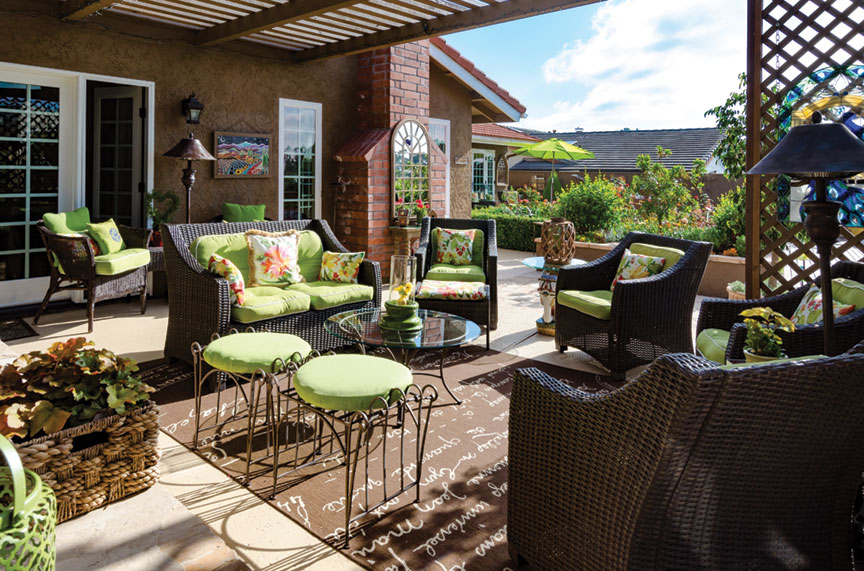 Inside the courtyard, potted Benjamin figs and sheered ‘Marjorie Channon’ pittosporums mark the way to the front door, past welcoming benches and a sculpted black pine (the sole survivor from the original landscape).

Here the wall holds a fountain flanked by Hawaiian snowbushes and a Mexican-tile townscape that reminds the couple of old La Jolla. Dex and Carolynn (“not pool people,” they say) agreed that the aged swimming hole squeezing patios outside the kitchen, dining and family rooms had to go.

“That’s one job Dex didn’t do,” Carolyn says. “But he did everything to build the rose garden that replaced it.” 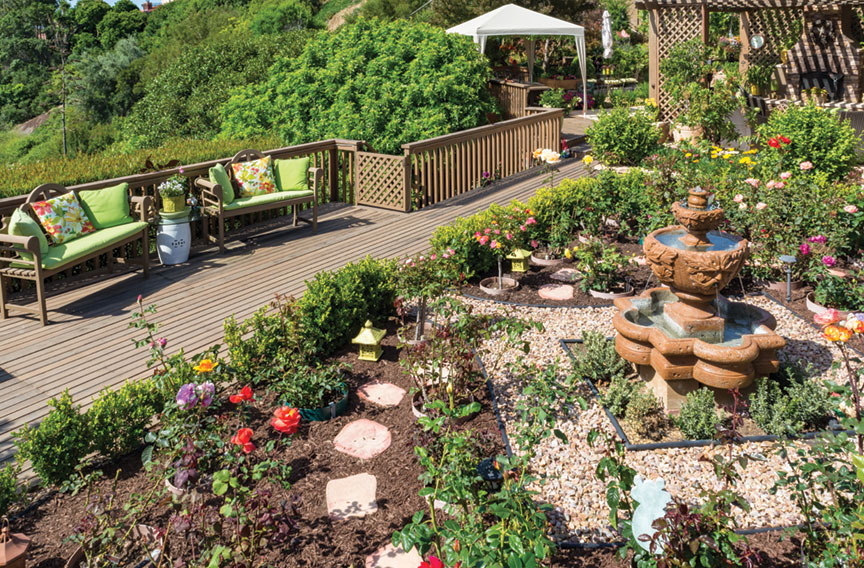 “I love the scent of roses,” says Carolynn. She often surveys the colorful garden with Dex; their Keeshond, Heidi Deux; and a day-ending glass of wine. Beneath a redwood pergola, all-weather wicker furnishings fill a patio warmed by a rustic stone fireplace decorated with a wreath made by a late family friend.

To the rear across a patch of lawn left for dog romps, a raised bed that Carolynn planted “with gay abandon” overflows with floral favorites, including a white-blossomed plumeria from the couple’s first La Jolla home.

Steps away, a deck that Dex built over a sloped canyon edge made space for the covered outdoor dining room where the couple hosts an annual August party for family and friends. Beneath a chandelier, a redwood farm table that Dex crafted to seat 20 is surrounded by French bistro chairs Carolynn spotted at IKEA. “They were $15 each. I said, ‘I’ll take them all,’” she recalls.

Even utilitarian side yards benefitted from the couple’s design/build skills. A potting bench and barbecue fill one. The other holds a mini-orchard, herb garden and two glowing lemon cypresses purchased in Carmel, one of the couple’s favorite travel destinations. 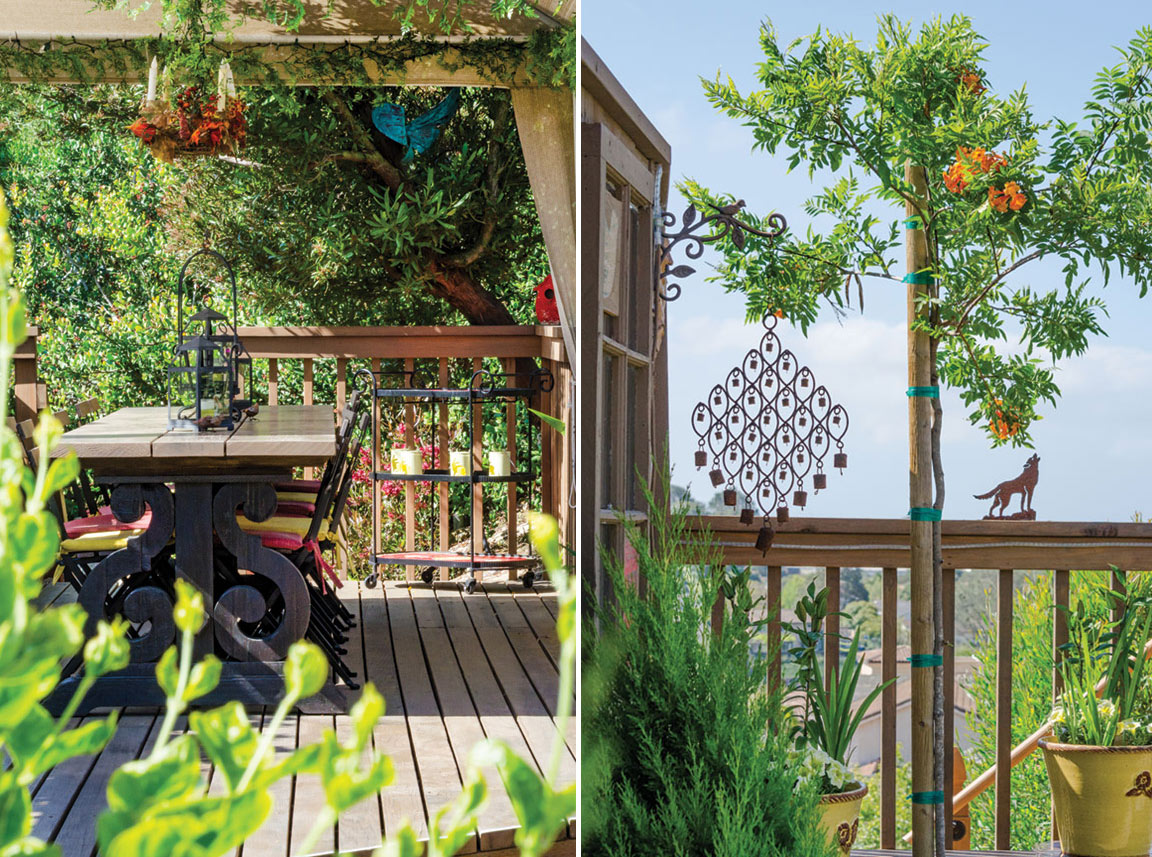 Two more golden evergreens moved here from the couple’s previous home mark the entrance to the back yard’s latest addition: a view deck reached by stairs up a rocky slope at the property’s southwest corner.

“We discovered we can see all the way to Coronado and Mexico here,” Carolynn says. “We also can watch Blue Angel performances.” After six years of projects, Carolyn and Dex still eye more improvements. The next additions — sheltered living and dining areas — are what Carolynn calls “family and friends rooms” ideal for year-round entertaining. But they also haven’t ruled out another move — and remodel. “We love this yard, but it takes some work,” Carolynn says with a knowing smile. “Eventually, I’m thinking we might want a smaller property and new garden.” 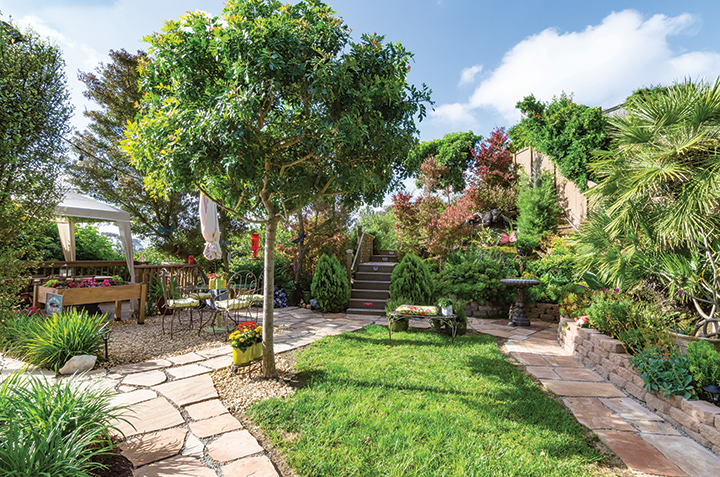