When, in 1994, Stockton residents Javad and Mitra Jamshidi purchased a cliffside La Jolla dwelling with expansive ocean and mountain views, the home served two purposes: providing a “dorm” for their two sons attending UCSD and a place they could stay while visiting.

When their younger son moved out six years ago, the physicians were about ready to retire to La Jolla, leaving Stockton after 39 years. They knew it was time to replace the 1960s-era house with one that reflected their Persian cultural heritage and embodied their environmental values.

Their primary consideration was creating a truly green, energy-efficient yet livable and comfortable home showcasing the site’s exquisite views while preserving its sense of seclusion. The old house was too cold in winter, too hot in summer and too dark except on the ocean frontage.

After a frustrating year working with an incompatible architect, they asked their son-in-law, who was completing his master’s degree in architecture in Dallas, for help. Through friends, he connected his in-laws with Simi Razavian Hemmeti, a La Jolla architect known for her expertise and advanced professional certifications in green building design.

Like her clients, Simi emigrated from Iran in the 1970s and grasped their desire to incorporate ancient Persian architectural design elements into their home. “Simi understands the culture and the architectural motifs,” Mitra says, explaining their compatibility. 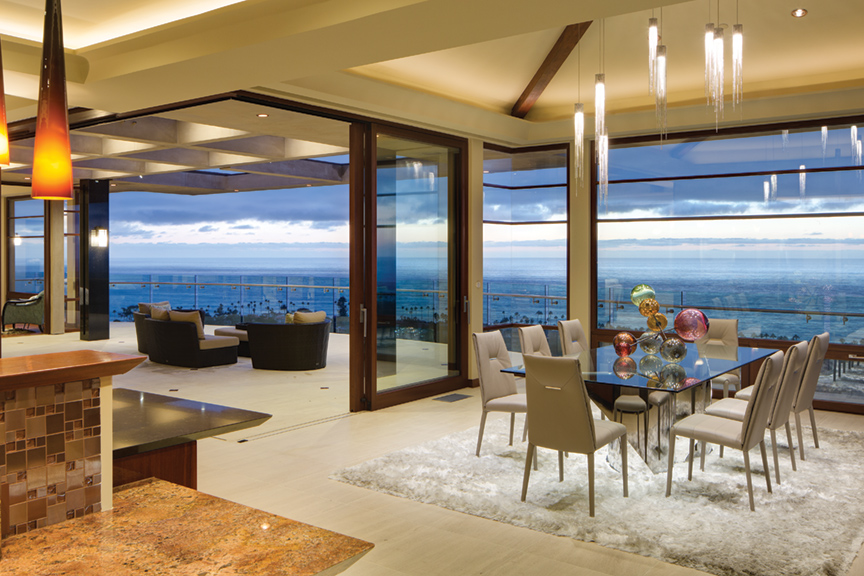 Her immersion in the principles of sustainable building, passive solar energy and energy efficiency began during her architectural studies in Iran, where she developed an appreciation for ancient sustainable solutions, such as wind catchers and tunnels. She incorporates such elements into her work to enhance cooling and cross ventilation. Initially Mitra and Javad planned to demolish the 3,500-square-foot house and start afresh. Simi persuaded them to remodel instead, explaining they could save lengthy permitting and construction delays by retaining 51 percent of their exterior walls, yet have the benefit of a new home. “I’ll design it so it doesn’t look like a remodel,” Simi assured her clients. The result is a 5,400-square-foot home on two levels, each with an oceanfront deck providing an additional 800 to 900 square feet of indoor/outdoor living space. Filled with subtle yet clever design details, the stucco house blends harmoniously into the neighborhood. 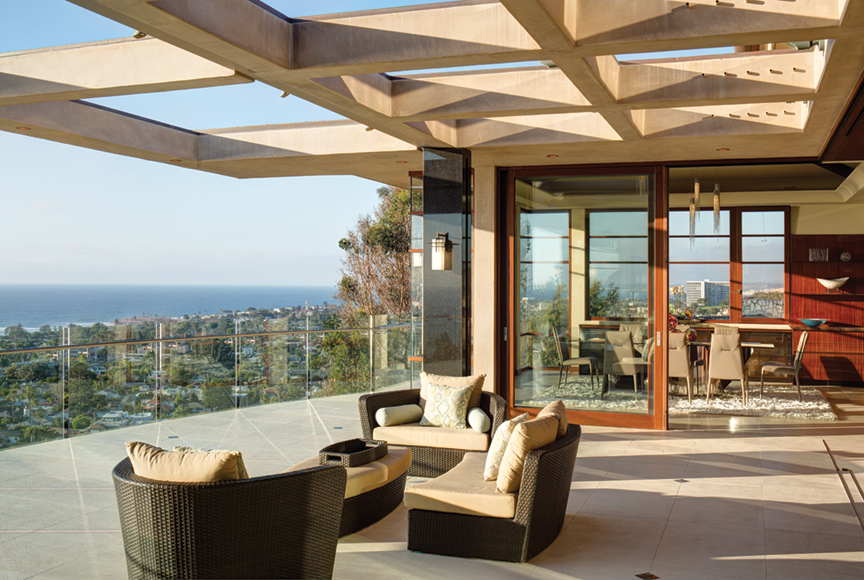 Because of their concern for sustainability, the couple chose deconstruction rather than demolition, recycling nearly all of the discarded materials, even though it took longer and cost more. Deconstruction and design consumed about a year, and rebuilding took another three years. Simi’s husband and partner, structural engineer Mehrdad Hemmeti, undertook the engineering and oversaw construction. Because the site is on a cliff and the old foundation had cracked, Mehrdad designed a support system of 26 caissons, which he sank 40 feet into the earth, adding seismic stability. To gain space for high ceilings, Javad and Mitra requested the foundation be lowered 18 inches. Simi retained the overall height of the roofline while changing its configuration, installing a series of varied-height pyramid roofs with skylights with a Persian influence. “Simi put a balcony on the side of the house, but it took a bit of the neighbors’ view. So we removed the balcony,” Javad says. “The neighbors were touched. It was the only change we made to Simi’s design.” The couple asked her to base their home on the architecture of Persepolis, the 2,500-year-old Persian city now in ruins. “I wanted to give them what they wanted from Persian architecture,” Simi says. “Behind every column and detail, there’s a story, but it’s not overpowering.” At the front-entrance portico and on the oceanfront deck, she installed sets of four black granite-encased steel columns inlaid with copper, recalling King Cyrus the Great’s gold-inlaid black columns at Persepolis. Also above the portico wall, she added Persepolis-inspired, stepped pyramidal decorative motifs. 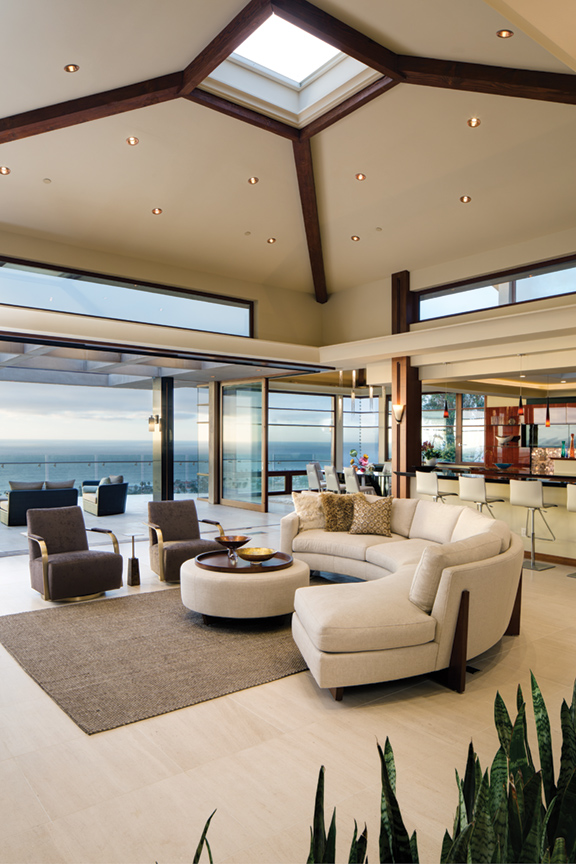 For ventilation and cooling, Simi installed remote-control skylights and clerestory windows as well as tilt-and-turn windows throughout the house. “My goal was to have three sides of every room open up for cross-ventilation,” she explains. For the master bedroom and dining room, which open onto the living room and deck, she designed sliding doors. Mitra selected custom, electronically controlled blinds to screen the glass walls on their oceanfront for cooling and privacy. To add ventilation on the eastern (front) elevation and to funnel ocean breezes into the lower level, Simi employed a Persian-inspired wind catcher, built into the cliff to prevent the build-up of moisture. 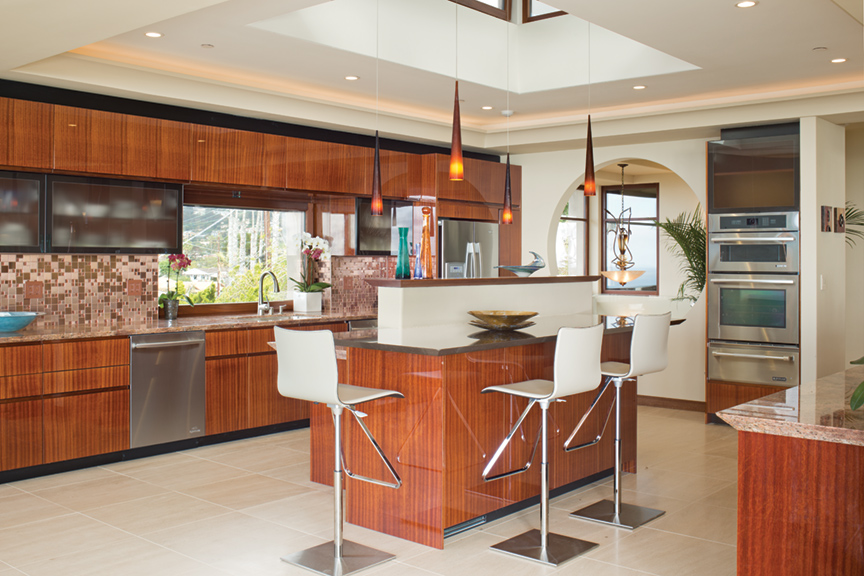 Discreet solar panels provide electricity and heat water. While the house has zoned heating and air-conditioning systems, Simi reports that her clients have not needed to use air conditioning. “Mitra and Javad originally wanted wood floors. I explained that stone captures coolness in the night and releases it during the day. Stone works as an element of passive solar design,” Simi says. They chose smooth limestone for the interior floors, with a rougher surface on the decks for increased traction. Stone proved another key design element, as the red-brown Brazilian granite chosen for kitchen counters set the color palette for wood cabinets, glass tile and other design elements. 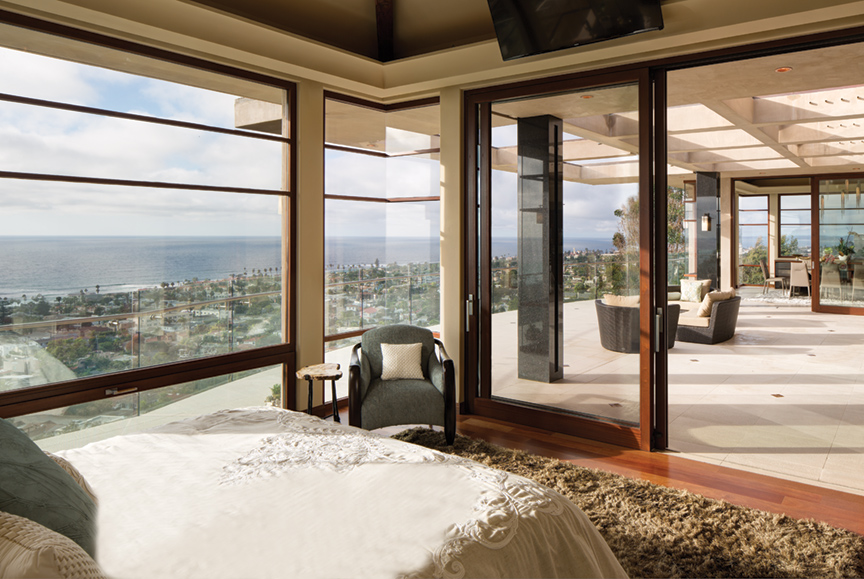 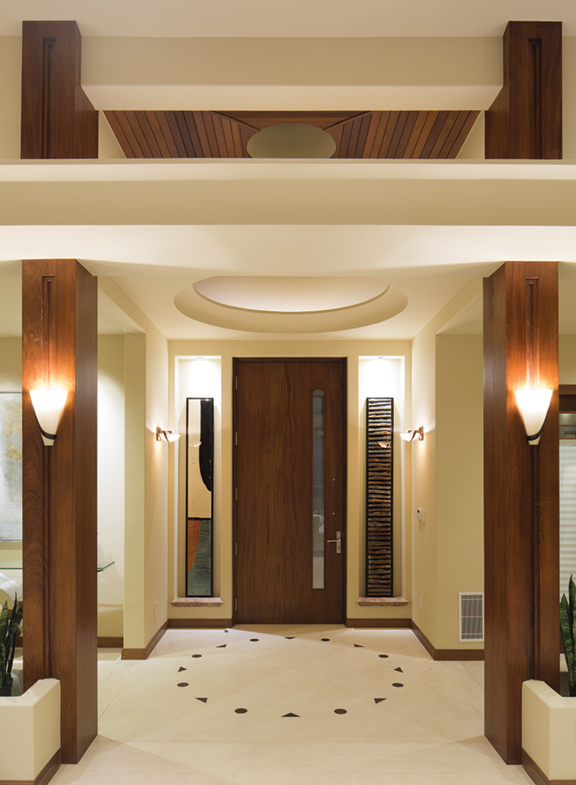 The home’s five bedrooms and maid’s room (all with en-suite baths) serve at least two functions, with one guest room doubling as Mitra’s office, another with a Murphy bed and desk functioning as a library/office and a third serving as a sewing room and their granddaughter’s playroom. Simi’s design ensures that almost every room has an ocean view. “As an architect, you have to be a problem solver. Having a good design means teamwork. If not for that, I wouldn’t have the opportunity to do this project,” Simi observes. “They trusted me.”