Come December in San Diego, the weather outside rarely is frightful, but decorator and floral arranger David Urban still takes precious care to ensure the historically designated 1929 home he shares with Mike Tristani is delightful. “Even though we don’t have the challenges of colder weather and blizzards and the like, this still is the darkest time of year, with longer nights and less sun,” David says. “So it feels good to symbolically counter that with light and warmth. “I’m looking for that cozy feeling that I had as a kid,” he continues. “Our tree was under a tall stand. My sister and I would park ourselves underneath the branches of this beautifully lit tree, festooned with tinsel — enjoying the aromas of its pine branches and the festive foods being prepared in the kitchen, listening to holiday music, awaiting the arrival of family and friends, and being tempted by brightly wrapped presents. We hung out there for hours in joyful anticipation. It was so much fun. I’m always acknowledging that feeling here.” David’s happy childhood memory is not lost in his Kensington home. The family tree that he so cherished gets multiplied by six: two large trees each adorn the family room and living room; a smaller tree graces the guest bedroom; and a duo of small trees cheers bar and kitchen island countertops. 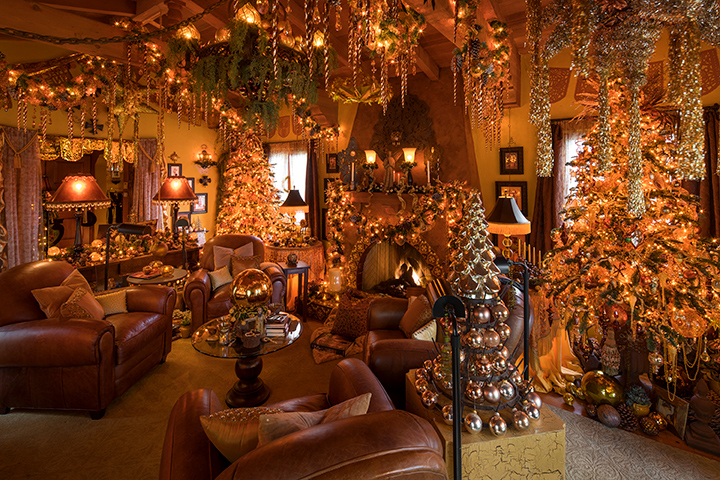 “Both of our living spaces have extreme symmetry with two windows flanking a fireplace and two couches,” David says. “It’s hard not to acknowledge that with two trees in each room. When I’m decorating, I ask myself, ‘How can I assemble décor and ornaments that relate to the space that they will be in?’” Years ago, when David and Mike lived in Talmadge, they had a Mid-century Modern home with a strict color palette of blacks, whites and neutrals. When they moved to Kensington, the Spanish-style residence had a warmer, more colorful scheme with ambers, tans, greens and golds. As the holidays rolled around and David merrily began decking the halls for the first time, the clear lights they owned “clearly” looked out of place. “I couldn’t believe it,” David says. “They didn’t have the warmth I was looking for, and they fought the color scheme. I never dreamt I would have to face this issue, because I was so happy with the clear lights when I had used them in the other house.” He solved the problem with amber-toned miniature lights that give off a brighter yellow. But the previous home’s metallic decorations also did not work with the architecture of the new residence. But the Spanish style presented a fortuitous holiday-decorating opportunity: a way to appreciate San Diego’s proximity to Mexico. 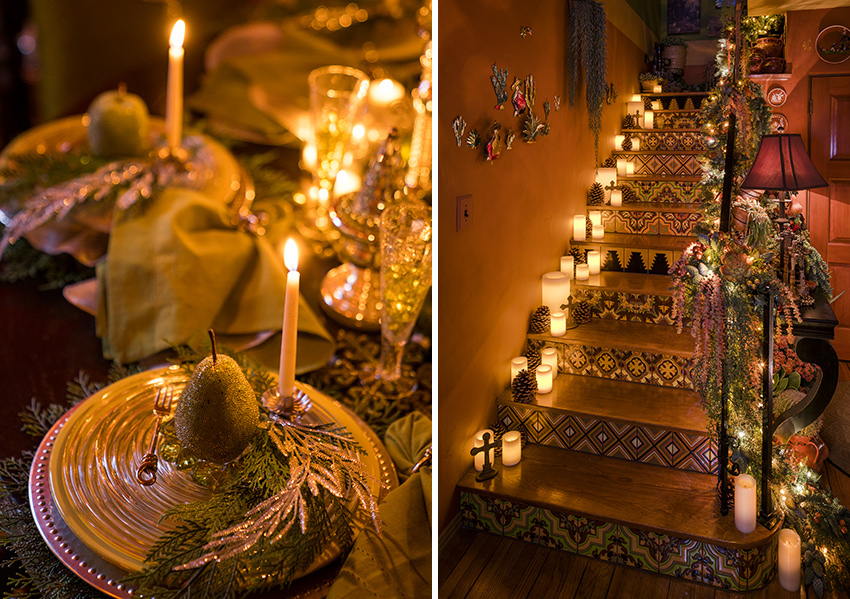 “I wanted to create that feeling of traditions, not necessarily my own, but in a city and house where they could have happened,” David explains. “I began amassing collections that would feel authentic in this house: a collection of black-glazed Mexican pottery; Mexican cinnamon bales and huge pieces of cinnamon bark, which were perfect in the kitchen; a little collection of sacred heart-motif milagros [“miracles” that are small religious charms from Latin America, especially Mexico and Peru]; tin pieces and straw objects and clay items. I adopted all of these things as if they were my history, distributing them throughout the house. And I kept going there with Christmas things.” In that vein, you won’t see Santa figurines among David’s holiday treasures. You will, however, see wise men and nativity scenes originally from Mexico, papel picado (pierced paper) banners and piñatas. “There are two piñatas at each end of the living room,” David says. “One is stationary. The other is on a counter-weighted pulley system that can be lowered so that guests can open it, reach inside and get a gift. I wanted to carry on the tradition of the gifts inside the piñata, but because it took me so long to decorate it, I didn’t want it to be broken open.” 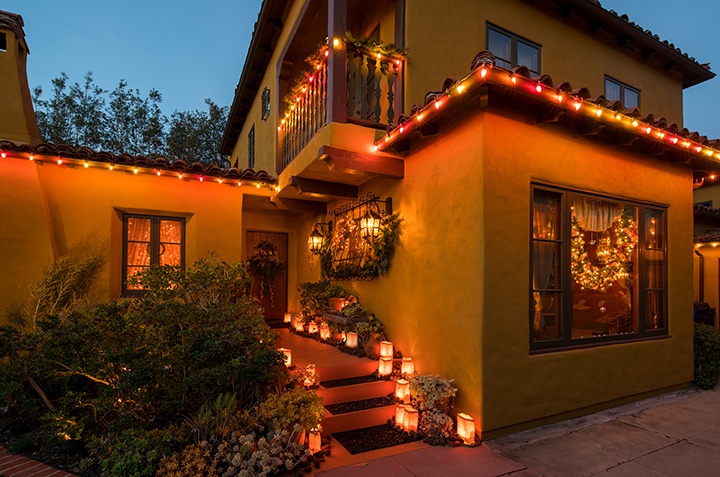 Inside the piñata are a dozen tiny, corn-husk tamales (handmade by David) that can be unwrapped like a fortune cookie to reveal a precious element’s symbol, such as gold for perfection, opal for hope and emerald for peace. A piano player once reached into the piñata to receive his fortune’s apropos symbol: ivory. “Christmas is an amazing time for me as a decorator,” David says. “Even as a kid, I loved having an excuse to do elaborate things for an event. Christmas is a real excuse to make the house into something that it is not normally, to add an element of fantasy, to give a nod to childhood, to create wonder and magic.”