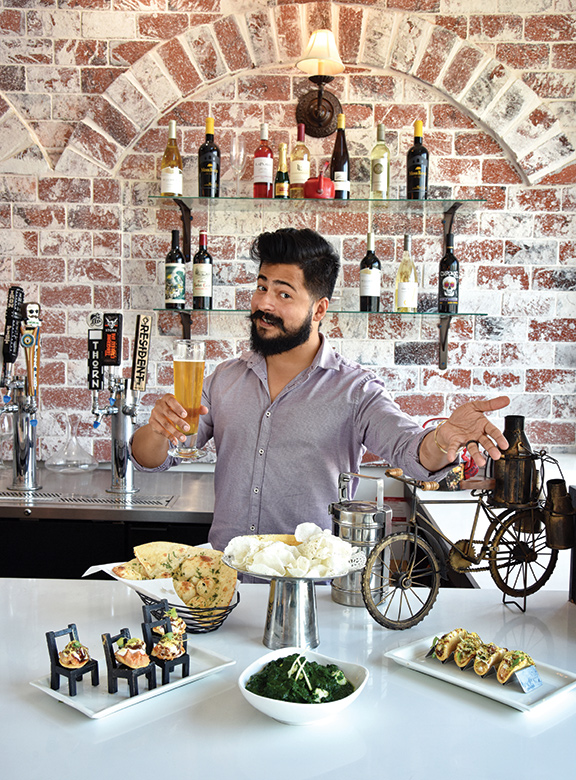 The youngish owner, Saransh (Obi) Oberoi, who says he’s from “way North” in India, speaks with an English accent acquired after spending several years there.

The well-written lunch and dinner menus list very few familiar dishes (chicken tikka would be one) and lots of locally unfamiliar options like martaban ka meat, a heady stew of spiced lamb, fennel and pickled chilies. Lunch entrées are especially filling, since they include sides of excellent rice, the day’s vegetable and naan. Portions also are large and include specialties like tandoori broccoli, which is chargrilled and flavored with mustard and coriander, and the Alleppey curry, a choice of fish or shrimp in a spicy, creamy sauce accented with mango and coconut.

WHOSE FAULT IS IT?

Yours, actually, since some lands above the Rose Canyon Fault are public property. If you’d like to tiptoe daringly close, stroll into Fault Line Bar & Grill. The new burgers-and-drinks retreat is at the base of a sleek tower in downtown’s rapidly rebuilding East Village. 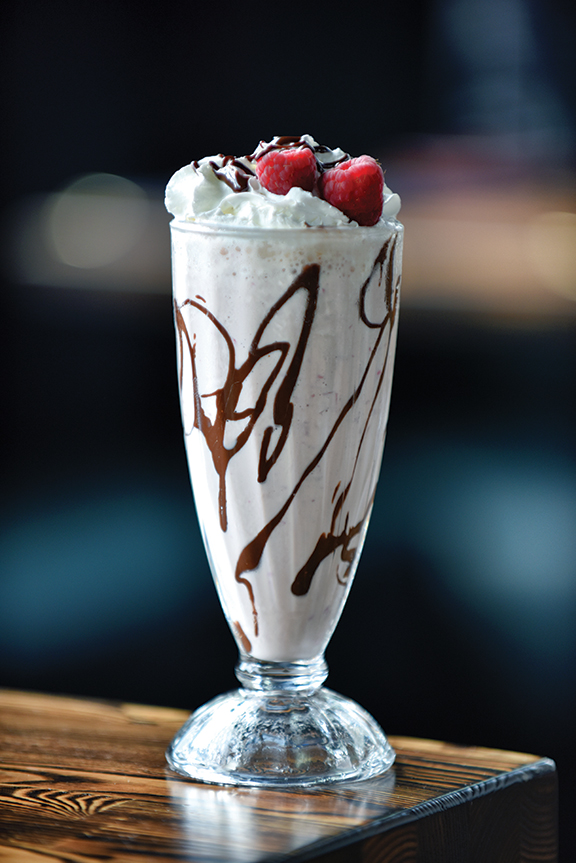 It is adjacent to Fault Line Park, directly above the Rose Canyon Fault, which, the menu advises, could produce a 7.4 Richter scale earthquake. But there’s a whole lot of shaking going on right now.

Essentially a bar with simple fare, the place specializes in spiked shakes: $12 tipples that combine vanilla ice cream with deluxe liqueurs. The Ecstasy works for us. The bartender blends ice cream with Chambord and fresh raspberries, and then adds a chocolate drizzle.

The food menu is unabashedly burgeresque, ranging in size from the Aftershock ($9 for a third-pound of the house Angus beef blend) to The Faultline ($15 for a pair of half-pound patties to which you may add double American cheese for two bucks). There also are easygoing appetizers (fried pickles seem the trend du jour) and a few sandwiches.

If Rose Canyon ever gets to rockin’, you may as well have a strawberry vodka-spiked Strawberry Dream in hand.

More and more Restauranteers agree with the old observation about martinis:

One is not enough and three are too many. So the owners of Hillcrest’s popular T rust Restaurant have forged up Park Boulevard to University Heights, where Hundred Proof also pours milkshakes.

More interesting is the house bottle service, which pairs 375 ml bottles of prime whiskeys (such as Maker’s Mark and Wild Turkey 81, all $60), with six-packs of determinedly everyday beers like Miller High Life and Coors Lite — definitely boilermakers for a hipper generation.

Food offerings are mostly appetizers like deviled eggs, baked crab dip and fish tacos. But if all the liquor induces serious hunger, you can tame it with a wood-fired pizza.

A man who has owned two famous restaurants for many years, Bertrand Hug complains that so many realty firms have taken over storefronts in Rancho Santa Fe’s quaint downtown that there’s no retail left.

Posh stores once lured the well-heeled to his sublime Mille Fleurs, which has had to cut lunch days to just Thursday and Friday. Chef Patrick Ponsaty, whose eponymous Ponsaty’s a block away closed in mid-August, complained of exactly the same problem. He’s a lucky guy, though, since right about then, Hilton Hotels called. When the behemoth chain bought Hotel del Coronado, it unceremoniously booted most top staffers. Their offer to Chef Ponsaty was to take over the high-end 1500 Ocean dining room and transform it into a destination for sophisticated travelers. As the chef says, “They want it to earn a Michelin star.”

After more than a year of receiving daily emails about $15 specials at Rancho Bernardo’s long-running French Market Grill, it seemed time to visit. It turned out to be a good idea, especially since Pierre Lustrat, a seasoned chef who ran La Jolla’s long-gone charmer, Escargot, was in the kitchen.

Boeuf bourguignon isn’t hard to make well but is not easily prepared like Chef Lustrat does it. The dark red wine sauce absolutely caresses the tongue, the chunks of beef that simmered in the sauce melt on contact and a symphony of vegetables adds endless grace notes. The specials do not include dessert, but you may as well have one of the superb tarte tatins.