A Joy Ride in Encinitas

A homeowner creates the perfect home for horses and nourished plants

Shortly after obtaining a three-acre property in Encinitas, Holly Rippey acquired one of her most prized possessions: a manure spreader to amend hard-packed clay.

The resulting soil eased the pathway for horses and nourished plants, including bright ribbons of ‘Barbara Karst’ bougainvillea that flutter all along the property’s fences.

Holly was searching for a “horse property” when she purchased her Santa Barbara-style residence in 2006 — drawn to its flowing floor plan, vanishing-edge pool and patios ideal for entertaining. “There were no outbuildings, though, and the landscaping was next to nothing,” says the former custom homebuilder who now preps for-sale houses through her business, Stunning Home Staging. “I started making changes, one project at a time.” 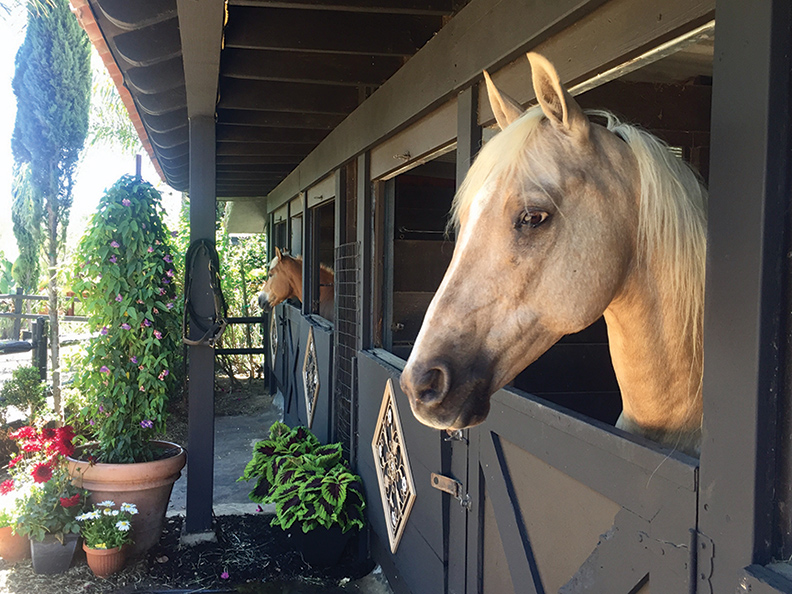 Up first was construction of a barn to house the 23 half-Arabians she owned then for breeding and a riding school. “I got my first horse when I was 7,” she says, recalling her Northern California childhood. “I have won awards for jumping, Western pleasure riding and other disciplines over the years. Now I ride for pleasure.

Eventually, a corner of the estate’s sprawling lemon grove gave way to an equestrian compound, veiled from the home by lattice-topped fencing, swaying California pepper trees and a flower bed with giant birds of paradise, ‘Tropicanna Black’ cannas and ‘Iceberg’ roses. The timber and tile-roofed barn is steps away from a small practice arena, fenced horse run and shaded riding trails where Holly’s three palominos exercise.

Nearby, in their own fenced enclosure, are the family’s miniature horses: Princess Athena and Diego. Once favorites of riding school students, the duo visits hospitals as part of the Ray of Sunshine Equestrian Therapy program for cancer patients.

Holly’s second undertaking raised a tree house in the canopy of three ficus trees, primarily for her son, Grant, who was 5 at the time and loved to jump from its deck to bounce on a trampoline below. A few years later, she hired builder Jim Bell to construct a skateboard ramp nearby, where she and fellow moms can watch their children skate from a lofty tree-house perch.

All the while, Holly brightened the landscape with color, mixing Mediterranean and water-wise favorites with lush tropicals she grew to love on her many vacations in Hawaii. “A lot of my gardening passion came from my grandmother in Saskatchewan. She was all about her garden,” says Holly, who also learned from her sister, an ethnobotanist, while landscaping a Lake Tahoe home. 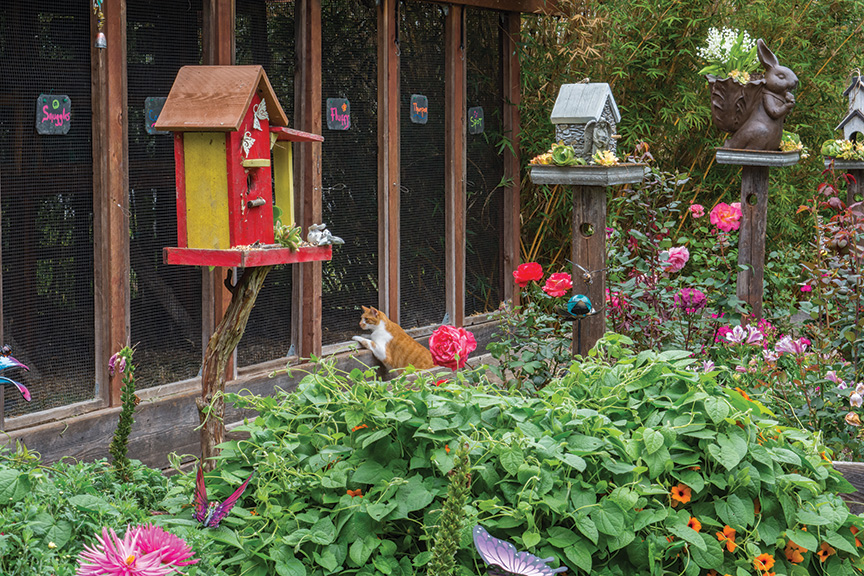 In the front yard across from the drive-way, a long border combines silvery blue fan palms with bronze phormiums, ‘Little John’ dwarf bottlebrush, tufts of blue fescue, society garlic and more. Past the garage, a gravel path wends beneath a morning glory-clad arbor through a side garden with beds of hydrangeas, ferns and other shade lovers, as well as sun-worshipping prickly pears, torch aloes and bold ‘Tropicanna’ cannas.

In full sun nearby, two raised beds accented with birdhouses supply roses, dahlias and other blooms for in-house bouquets. Behind them are enclosed runs for six rabbits and a shelter for neighbor-hood feral cats that Holly adopts to help with pest control. 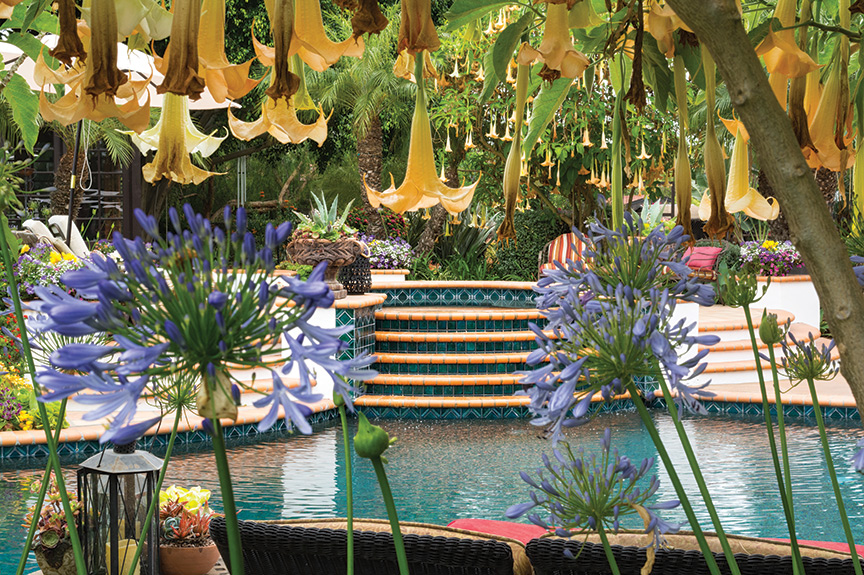 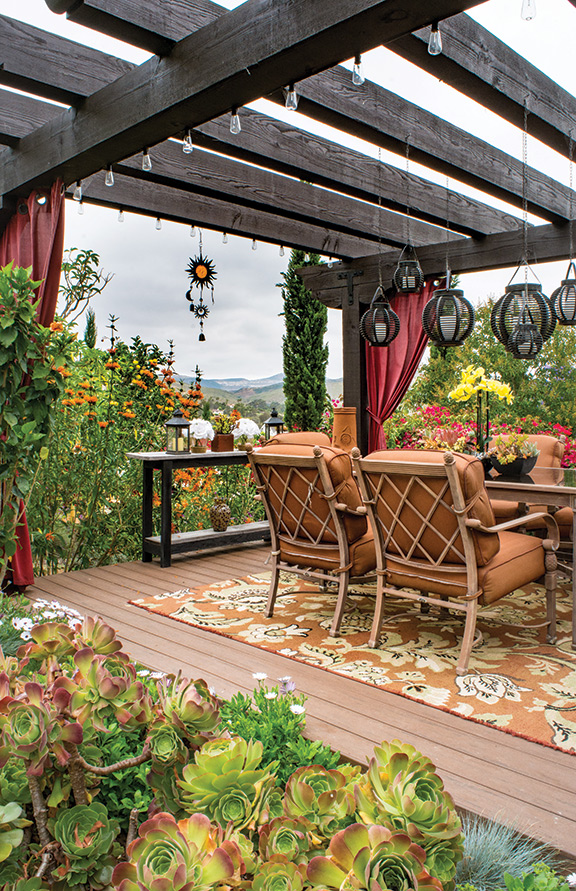 Around the pool, spa, fire pit and adja-cent backyard patios, lights circle the trunks of a half-dozen palms, including a Queen palm that leans over the shimmering water, its crown of fronds frolicking in the breeze.

Here yellow, red and pink hibiscus mix with cream and peach angel’s trumpets, one of Holly’s favorites. “They are incredibly fragrant in the evening — a big asset when you have horses nearby,” she says. Downslope, Holly created a dry stream-bed by covering a drainage ditch with cobblestones.

A small footbridge crosses to a dining gazebo built by her fiancé, Jonathon Chillas. On either side, lemon trees dot fragrant beds of lavender, rosemary, roses and a few sculptural succulents. With its view of nearby hills where Jonathon mountain bikes, it is one of their favorite places, says Holly. “We’re out here mornings or evenings almost every day, all year long.”