Castles in the Woods

A round Fallbrook, Paul and Carol Elston’s home is known as “The Castle.” For years, the regal French country manor with its fanciful chimneys, diamond-pane windows and estate-style lanterns was easily viewed from the street. Now, verdant woodlands planted by the homeowners over the past 25 years largely seclude the stone façade. “I grew up in Alice Springs, Australia,” says Paul, who met Carol when a job brought her contractor father and the rest of the family from Los Angeles County to the remote outpost. “It’s a desert. That’s why I bloody well wanted trees — hundreds of them.” Today, exploring the 4-acre landscape of gnarled oaks and sycamores, towering pines, glowing white birches and liquidambars is a journey through an enchanted forest, as visitors on last spring’s Fallbrook Garden Club tour discovered. Along its meandering paths, to the music of fountains and wind chimes, they delighted in the property’s many little-known charms: a subterranean wine cellar with a flowery green roof, whimsical gazebos and two mini castles. All showcase Paul’s extraordinary talent as a mason, a craft he learned Down Under and pursued locally after immigrating to America and moving to Fallbrook in 1979. Among his many projects was the Fairbanks Ranch residence of one-time San Diego Padres President Ballard Smith, which became a model for the Elston family home. 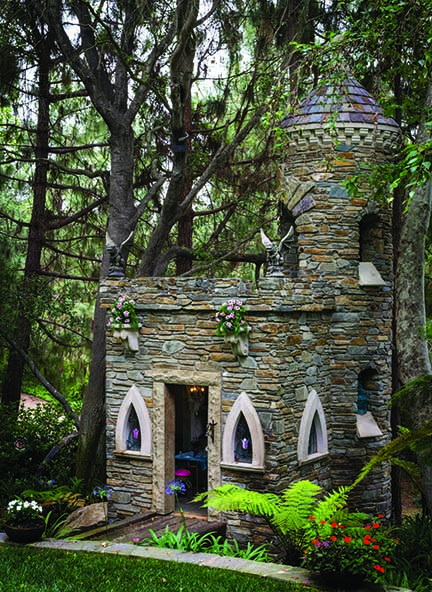 “I knew I didn’t want Spanish and I didn’t want palms,” Paul recalls. “I loved Ballard’s house and the gardens around it. I was inspired by them.” In the expansive front yard, a circular driveway arches over a stream fed by a manmade waterfall that refreshes a large koi pond. Coral-red cannas, water cabbage and other aquatic plants at the pond’s edge give way to swaths of lush ferns and swaying agapanthus, hydrangeas and society garlic blooms. Behind the home, another waterfall tumbles over manmade boulders down to a kidney-shaped pool that floats in a Red Mountain flagstone patio. Honeysuckle and jasmine vines ramble around impatiens and begonias on adjacent slopes studded with boulders that Paul collected in the 1990s when con-struction blasting along Interstate 15 jarred them free. 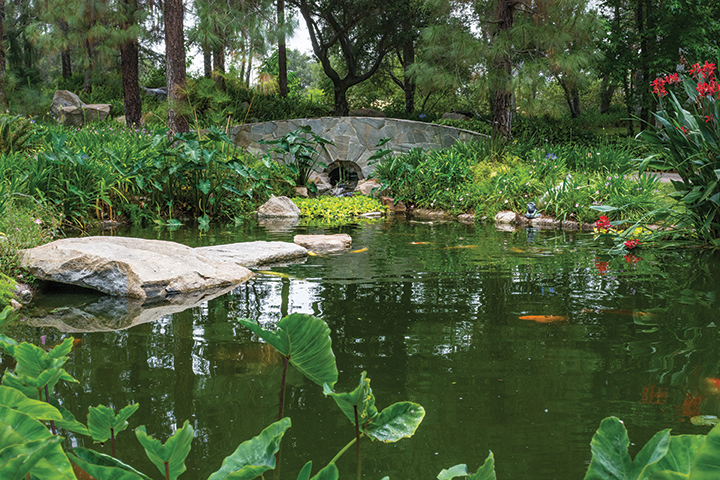 When a nearby school demolished its parking lot, Paul and Carol repurposed the broken concrete to edge patios in the shade of majestic oaks original to the property. Over the years, they planted saplings rather than specimen trees, welcomed self-sowed “volunteers” and scattered seeds to grow shade-loving flowers. “Carol insisted on little 1-gallon plants, while I’d go for bigger ones. Wouldn’t you know hers grew faster than mine,” Paul says admiringly. At the property’s edges are a stable and corral for the family Belgian draft horse and pony, a workshop and potting bench, and a guesthouse built for visits from Paul’s parents. But the scene-stealers are Paul’s whimsical creations often crafted with surplus materials from jobs or long-time suppliers. A wine-barrel fountain and a “Wine is Life” plaque above a rustic door mark the entrance to the stone wine cellar that features a reclaimed French brick-coved ceiling, travertine floor and jam-packed redwood racks. Outside the cellar, a kangaroo whirligig enlivens a pub table and built-in flagstone bench for alfresco tastings. 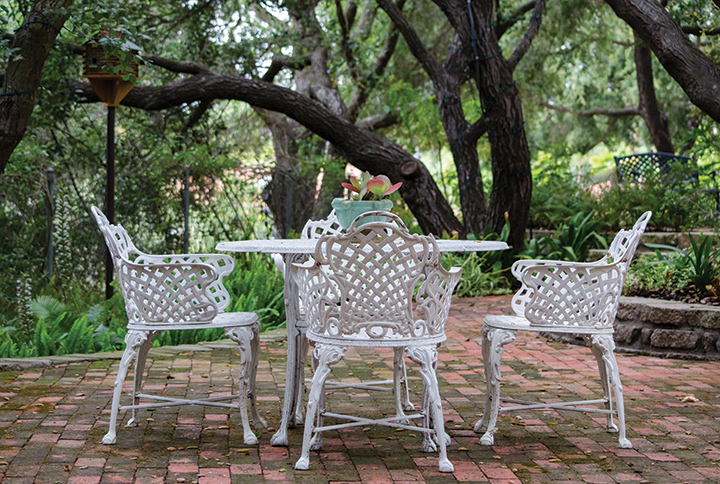 “I love watching him run like crazy while I enjoy a glass of wine,” Paul says. Steps away, a two-story gazebo with flag-stone sides, brick columns, iron rails and a wood ceiling captures views around the garden through a scrim of orange trumpet and honeysuckle vines. Skirted with glowing orange impatiens and flanked by tree ferns, a second structure is topped with an airy cast-iron dome embossed with grapevines, a gift from a client that resembles follies found in European estate gardens. 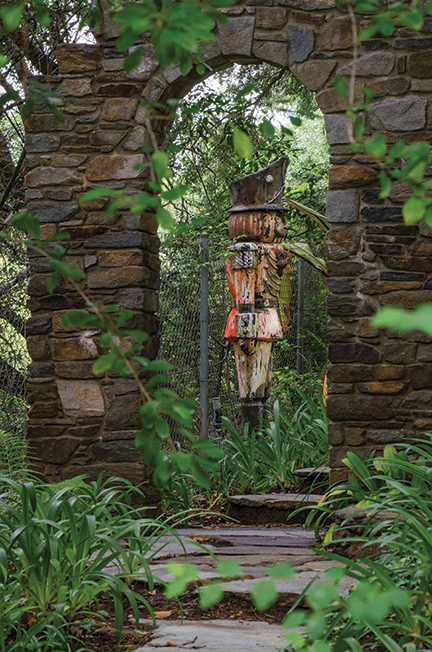 Paul’s masonry skills turned playful with the castle playhouses he built using leftovers. The fanciful structures delight the couple’s three grandchildren. Tangled was packing movie theaters when he constructed the first: a Rapunzel castle with a saw-tooth crown, crumbling buttress and view platform where a princess could let down her hair. Five years later, the second castle rose next to a cobble-lined stream that roars to life in the rainy season. Stained-glass win-dows and a crystal chandelier illuminate the interior outfitted with a copper sink, dressing table and cedar chest topped with a velvet cushion. A pair of gargoyles guard the thick plank bridge to the front door. Over the years, the fairy-tale setting has hosted weddings for Paul and Carol’s daughters and other family fetes, like the annual Easter egg hunt when 1,000 candy- and coin-filled eggs are hidden around the property. For Paul and Carol, though, evening strolls are their favorite time in the garden. “It’s most beautiful here at night, when landscape lights shine through the trees,” Paul says. “It’s the perfect time for a walk.”