A Work of Art

A shiny, orange-yellow, origami-esque sculpture stands en pointe at the entry of Kathleen Vaughan and John Treadway’s abode — a clear indication that this home is an original. Created by New Mexico artist Jeremy Thomas, the air-shaped steel has a smaller, mostly blue, sibling in a spot visible from two terraces. Before an extensive remodeling by architect Tim Martin and interior design firm McCormick & Wright, the La Jolla residence lacked the style to pull off a level of sophistication worthy of the homeowners’ art and crafts collection. “We purchased the property in 1999. It was a small cottage of about 2,500 square feet,” Kathleen says of the structure built in 1952. “It had multiple iterations of re-modeling, none of which tied to the other. The only good piece of it was the half-acre lot that offers a fair amount of privacy.” Before they could modify the house to their liking, the couple relocated for business reasons to Minnesota, San Francisco and Iowa. 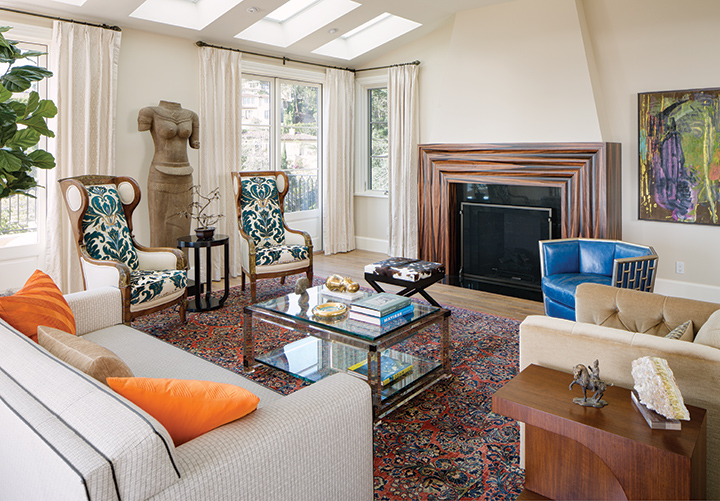 “When we came back, we were going to move to another property or rebuild here. As we looked at the market, there wasn’t anything in our price range that was 100 percent beautifully done, so we decided to rebuild,” Kathleen says. “Tim built a property for a friend of ours, and we liked the results. And Robert [Wright] did a home for a friend of ours, and it is beautiful.” Thus, they formed their design team. “We wanted an exterior that would stand the test of time,” Kathleen says. “I call it ‘modified cottage.’” 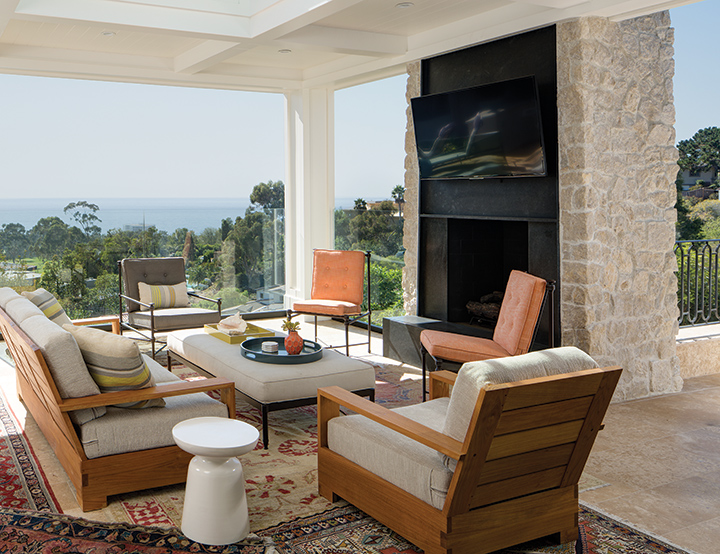 “When I got here, the house had two one-car garages, and the front door was an afterthought on the edge of the driveway. Part of the house jutted out over the front door,” Tim says. “It was an ill-conceived collection of remodels. But once you got up to the second level, it had great views and was serene.” Tim moved garage space to the other side of the entry, excavating into the hillside to accommodate a two-car garage, laundry room, wine cellar and other storage, as well as an expanded foyer and powder room. Another problem with the old house was the stairway just inside the front door. Robert describes it as a tunnel leading straight up to the living room. Now the steel-framed-glass front door opens to a light and airy foyer with an open staircase that curves gently at the bottom. Tim used the previous garage space for a guest suite and a den that provides a place for John and his buddies to watch television while Kathleen works upstairs. “I can bring food down here. I can watch TV. Everything is cool,” John says. Appropriately, a large painting by Squeak Carnwath reads “Guilt Free Zone.” Among furnishings in the room is a turn-of-the-last-century, dark wood rocking chair that John bought for $25 at a garage sale in 1965. Now reupholstered in rust-colored leather with nailhead trim, it sits on the edge of an Aztec-design area rug and faces an L-shaped sectional sofa. 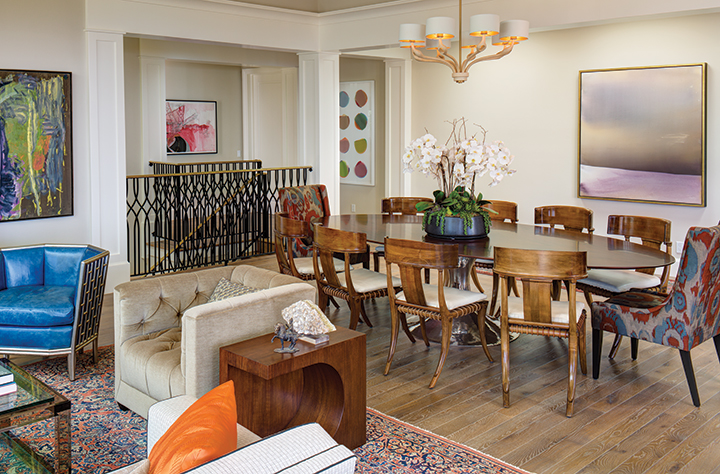 Upstairs, the remodeled living/dining space and kitchen remain in their original configuration but “arrived on steroids,” Kathleen says of their increased visual impact. To make the rooms more volum-inous, Tim removed a wall that separated the living and dining areas. The previous kitchen’s main drawback was its disregard for the ocean panorama beyond the back wall. Upper cabinets and an appliance garage blocked the view. The new kitchen features a large pane of glass behind the sink and windows on either side. Tim raised a portion of the kitchen ceiling to create a “belvedere” — an architec-tural element that includes electrical lights straight overhead and motorized windows on four sides to provide more light and air. Directly below is a large island topped in gold-veined Calacatta Siena. “When I saw the slab, I said, ‘I don’t know …,’ John recalls. “When they put it on the blue cabinetry, I said, ‘Oh, that works.’” “One of the first things Kathleen talked about was their travels to Europe, where she enjoyed seeing remodeled, contemporary kitchens in old homes,” Robert says. “We pushed it a little further, mixing lacquered lower cabinets in custom blue slate with textured white oak.” Tim opened the kitchen and living room to the outdoors by adding sliding doors onto a lanai. He expanded the previous terrace, ditching its wood rail for clear glass that offers uninterrupted views toward the ocean. A fireplace sits in the center of the opening facing other houses. “Sometimes it’s not as much what you look at but what you don’t look at,” he says. 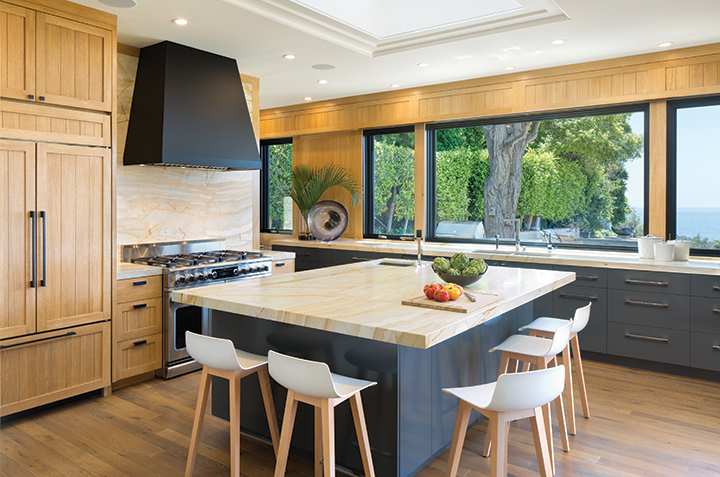 “You don’t have to block something out 100 percent.” From the lanai, a turn to the left — across what Kathleen and John call “the sliver” — brings you to a long patio encompassing a barbecue station; mature California pepper tree; and fire pit, behind which rests a stone bowl from Zimbabwe. Tim’s design incorporates outdoor spaces with multiple decks around the house to take advantage of the sun’s path throughout the day. “Some people have exterior areas and never go out. We are not those people,” says Kathleen, who enjoys coffee on an intimate patio that gets early morning sun. In addition to the living/dining and kitchen spaces, the upper level includes a room that some would label a home office but Kathleen calls “Command Central, where it all happens.” Consuming most of one wall, a commissioned painting by Asa Kvissberg depicts the journey of Kathleen’s life. Another painting by the Swedish artist — one showing Kathleen and John together — hangs in the master bedroom. Visitors staying overnight in the guest bedroom across a short hallway can enjoy watercolor sketches from the late 1700s/early 1800s by an ancestor of John’s in England. Aside from the main house, the property includes quarters for a caretaker, who looks after the residence when John and Kathleen spend time at their second home in Indian Wells. 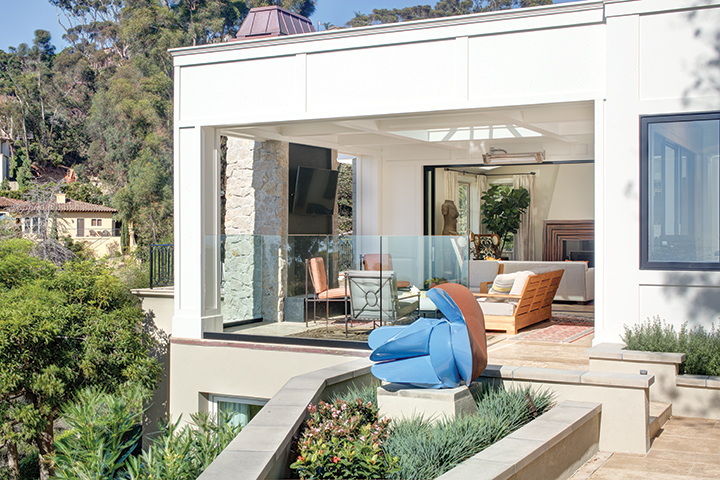 “[The desert residence] houses more of our travel stuff — crafts collected from all over the globe, including quite a lot from Africa and the Mideast,” says John, who notes that they have visited 70 countries. “It was nice working with clients who had a history of their furnishings — pieces that meant something and made [the design project] individual for them,” Robert says. “I didn’t really care what was in the current mix,” Kathleen says. “I understand the modern trends, the Pantone colors of the season. But isn’t there room for individuality?” Looking around the couple’s home, the answer is a resounding “yes.”