With more than 600 plant varieties accounted for, Carey Pratt’s Point Loma garden demonstrates that sometimes more really is more. “If I’m considering the purchase of plant A, B or C, I almost always buy all of them,” says Carey, who has loved gardening since he was a child. He and his husband moved into their La Playa property in 2008 after a yearlong remodel of the house. Soon after, Carey turned his attention to the landscape, which he completely redesigned and planted himself. “There was no set plan for the land-scape,” he says. “But I have had a long-time passion for Mediterranean-climate, drought-tolerant plants and years of experience with other properties, including a 6-acre property in Sorrento Valley. So I was knowledgeable and knew pretty much what I wanted. And I have a good eye.” A wall was added to enclose the entry patio, incorporating the front gate and one of two grape arbors. Preformed concrete columns support the other arbor. The ele-ments conjoin to give the intimate space the feel of a Grecian courtyard — complete with a large, ribbed, antique Greek vase that once was used to store olives. The focal point of the area is a sizable fountain, also devised by Carey, constructed from concrete clad in limestone. It boasts two waterfalls and eight connecting pools through which water continuously circulates. 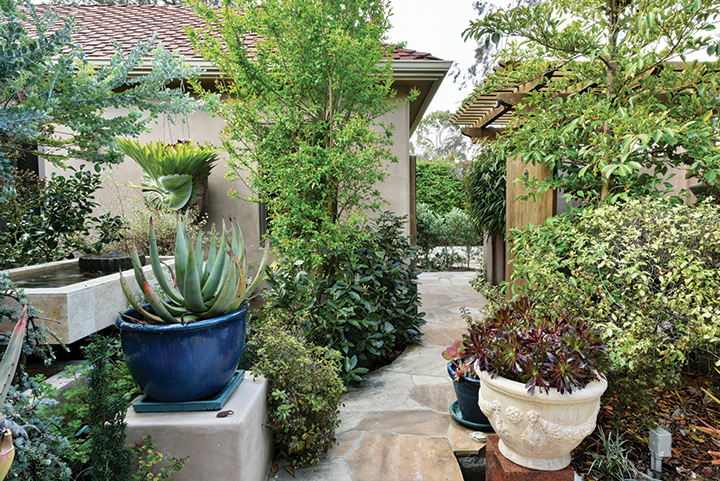 Elevated pots in cobalt blue and cream are sprinkled around the patio, some resting upon plinths of red and black granite in the pools. They contain Reitz’s aloe (Aloe reitzii) and ‘Schwartzkop’ aeonium. The silvery gray leaves of a pearl acacia throw dappled shade over the gurgling water of the fountain. A pomegranate tree grows on the other side of the water feature. Across the way, a strawberry tree (Arbutus marina) with peeling, cinnamon-hued bark resides next to the arbor bearing concord grapes (Thompson seedless grapevines cover the other arbor). The far corner of the patio flows neatly into a small side area, which leads into the latticed entryway to the front door.  A custom nook displays a woodcarving that faces the largest of the fountain’s pools. It sits before a window looking into the home’s foyer and features a plethora of rocks in a variety of sizes and shades. A sapling sprouts from a central planter. 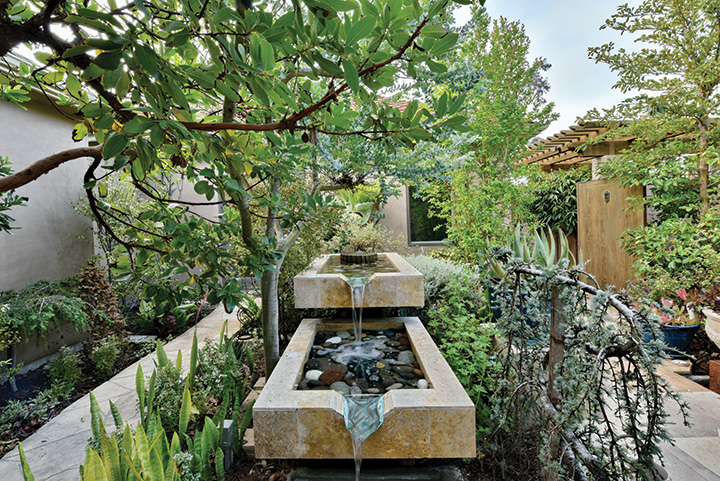 Two concrete-block planters, added to the home’s exterior, contain various types of succulents and other hardy plants. The thick trunks of twin Queensland bottle trees (Brachychiton rupestris) reside next to bristling masses of Mexican grass trees. “Sooner or later, every San Diego gardener, including myself, discovers the wonder of succulents, agaves and aloes, which blend beautifully with a Mediterranean palette,” Carey says. “I love succulents because of their beauty and the ease with which they reproduce.” A verdant corridor that lies between the side of the house and the neighboring fence thrives in the cool and shady space created there. This is one of Carey’s favorite spots, its tropical setting the perfect atmosphere for epiphytes like the great staghorn fern that adorns the wall. The back yard is a multilevel affair, with the first supporting the home itself. A swimming pool on the second tier was filled in to provide more room for the greenery. A large Buckskin flagstone deck overlooks the stunning view of the marina. 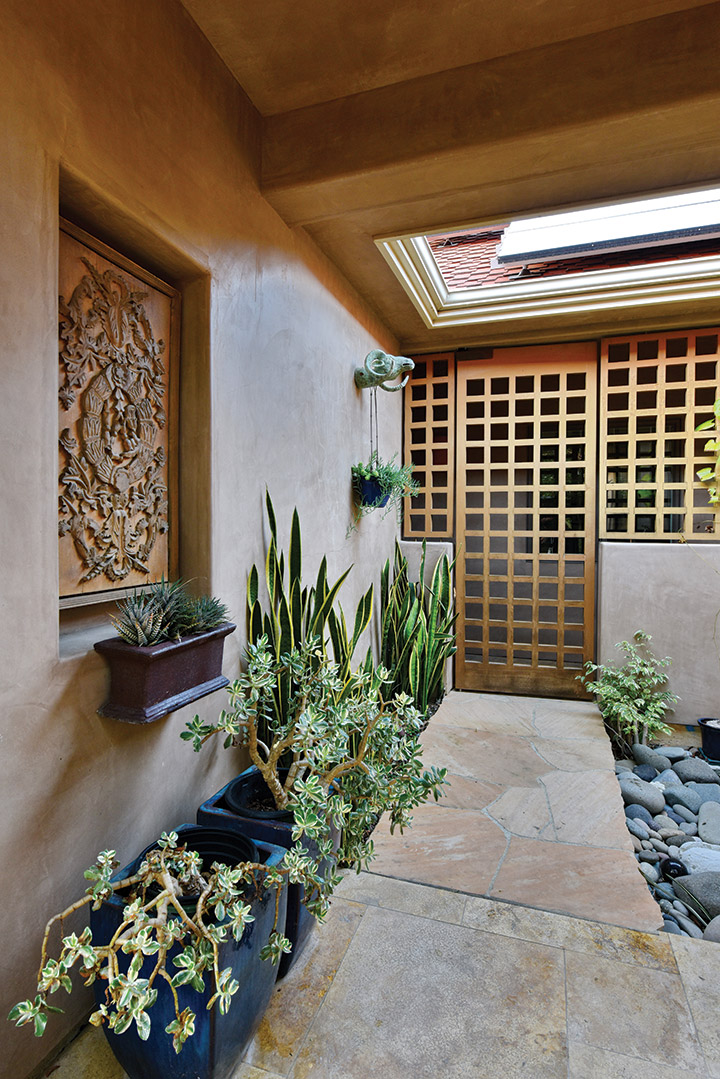 Directly behind the deck is an artfully arranged garden bed centered on a fountain. The water feature occupies the middle of a keyhole-shaped configuration of multihued rocks, outlined by gleaming stones. Close by are five olea ‘San Fernando,’ planted together and trimmed until they grew into a single spherical shrub. The third level, which along with the fourth retained its original brick hardscape while the two above were redone in flag-stone, features the only two plants that Carey preserved from the previous land-scape: a pineapple guava tree (Feijoa sellowiana) with lovely red bristling flowers and a Meyer lemon tree. Across from the lemons a ‘Little Ollie’ olive shrub complements the adjacent raised beds for vegetables and flowers. A greenhouse at the end of the path serves as a hothouse for raising orchids. The fourth level hosts a compost area that creates fertilizer for the property. A western fence lizard keeps this fenced-off area fly free. Watering is done manually through soaker hoses, which connect to 19 copper ball-valve stations. A variety of intertwined plants grow along an ambling path. They include a mountain aloe (Aloe marlothii) in full bloom, with vibrant orange blossoms on display and a Myrtillocactus with an abnormal growth that resembles the human brain. Farther along, pink bush euphorbia (Euphorbia xantii) grows alongside fellow euphorbias, as well as various yucca, aloes and agaves. 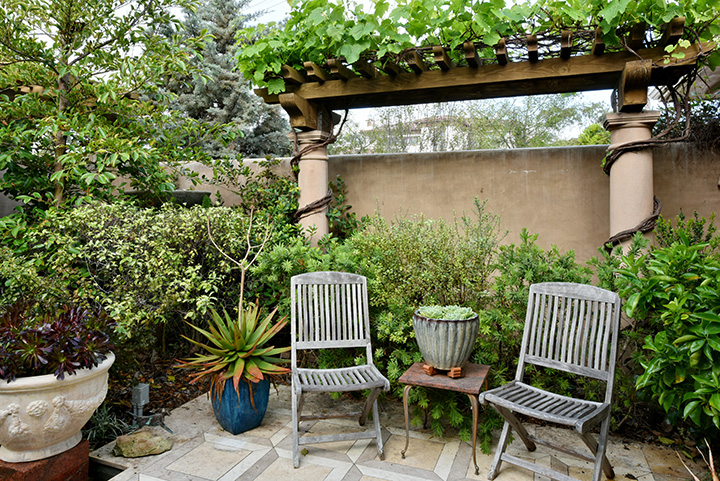 A scented paperbark (Melaleuca squarrosa) stretches its many vertical white stems, profuse with lavender spring blooms, toward the sky. Yellow bells (Tecoma stans) live up to their name, sunny faces adrift in the breeze. Blue-gray-leafed blue bush (Acacia convenyi) — grown from seeds obtained from Australia — resides alongside its fine-leafed green cousin, Mudgee wattle (Acacia spectabilis). A Madagascar ocotillo (Alluaudia procera) presents a gorgeous study in contrasts: tender green leaves grow amid the bone white spikes of its spindly form. Carey’s unique selection style resulted in this eclectic meshing of flora. “Every week I prowled the nurseries, picking up plants — and I still do,” he says. “I never go with a plan. I just choose what inspires me. I love to mix various colors and textures, deciduous and evergreens.” A garden eight years in the making is complete — for the moment. “There will no doubt be further adjust-ments, as every garden continuously evolves,” Carey says. “But this is the garden I imagined.”