Even the most cursory Google search uncovers an astounding plethora of statistics, research treatises, case studies, surveys and other documentation supporting the concept that children perform better in school and social interactions — and ultimately in their careers — when schools incorporate arts into their curricula. A saxophonist who toured internationally with the Klezmer Conservatory Band and now a professor in the School of Arts at California State University, San Marcos, Merryl Goldberg has devoted a book to the topic: Arts Integration: Teaching Subject Matter Through the Arts in Multicultural Settings (5th ed. 2017, Routledge). “The core activity of working with or through the arts, either as a creator or as a participant/observer, puts one on a path of engagement,” she writes.

In April, Merryl gave a keynote presentation at the Second International Workshop on Language, Music, and Computing in Saint Petersburg, Russia. She told the attendees about the Art Opportunity program she has been spearheading this year at CSUSM.

“The thing that’s different from other programs is this is actually a campaign,” she explains. “It is a research-based initiative to get people past the notion that arts are fluff — to understand that the arts truly are fundamental and essential to successful education, to successful employment and to an empathetic and engaged citizenry.”

San Francisco-based Stuart Foundation, whose mission is “to improve the education and lives of young people,” is funding Art Opportunity with a $200,000 grant. A Black Violin concert at Escondido’s California Center for the Arts in February presented Merryl with a launching platform by way of a pre-concert talk meant to inspire local teachers.

Black Violin’s Kev Marcus and Wil Baptiste were the perfect duo for the campaign, because they advocate for the power of music even while on tour. “We know the effects of having arts in our lives,” Wil says. “It made us better students, because we had something that we were focused on. That helped us in turn focus on math, science and other classes. It gave us confidence.”

“There’s a lot of research around music, and a fair amount about music and math,” Merryl says. “When it comes to science, there’s a fair amount of research about visual arts. There have been many studies showing different arts work better for different disciplines. Performing arts teach students to work well with others. But I think all the arts lend themselves to teaching any subject matter and engaging students.”

In March, Art Opportunity offered a series of workshops by Sara Pennypacker and Jon Klassen, author and illustrator, respectively, of the children’s book Pax. They included presentations at CSUSM and The New Children’s Museum geared toward educators and aspiring educators, one for the North County Professional Development Federation, and at schools in San Marcos and Chula Vista.

In April, Merryl explained the campaign to attendees of the FutureNOW! Conference for educators, held at Poway Unified School District’s Design39 Campus. Next on the schedule, in June, was a three-part Literacy and Arts Integration Bootcamp at North County Regional Education Center for teachers, future teachers, teaching artists and parents. The Art Opportunity team has created 14 “playing cards” — downloadable from the program’s website (csusm.edu/artopp/tons_of_research/index.html) to reinforce the impact of arts in education (e.g. “Why Art? Students consistently show deep critical thinking skills.”) They are intended as “conversation starters,” Merryl explains. 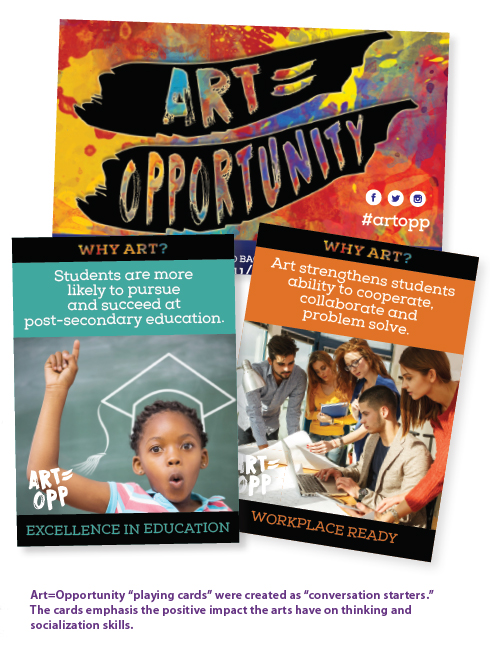 “We’re giving out playing cards to parents and teachers, and we had a request for them from Create CA [a statewide arts education coalition]. The California County Superintendents organization is also going to feature the cards on its website,” she says. “Media design professor Lucy Solomon is an expert in visual mapping, so we can start mapping Art Opportunity’s reach, including the use of the cards to see how we are doing.”

Moving forward, Art Opportunity applied to have the campaign used for fall and spring senior projects at CSUSM’s College of Business Administration.

“We will be working with two teams of students earning marketing degrees,” Merryl says. “We are thinking they will look at what is the most effective way to get the word out and how we market the cards and whether we should market something else like T-shirts or informational items that people will use.” Also this fall, the campaign is “rolling out extended learning modules” Merryl says.

The five-week, Tuesday-night classes will cover the impact of arts in the areas of business, social justice, language, math and science. The sessions are open to the public, and those working in the educational arena will receive professional development credit. For winter, Art Opportunity is working on a teen summit.

“The goal is to empower teens,” Merryl says. “If we start giving resources and tools to teens, we are aiming at the future. If teens really understand that arts are important and they have the tools to talk about it in a way that is powerful, our next generation will not think the arts are fluff.”