Twenty years ago, Dale and Linda Lee bought their new home minutes after seeing it for the first time. The El Cajon tri-level would house Linda’s English antiques, while the multiple garages above a citrus and avocado orchard would give Dale a place for his classic and muscle cars. “We didn’t notice the amazing views until we moved in,” says Linda, pointing to a west-ward panorama crowned by Mount San Miguel, Mount Helix and Cowles Mountain. Linda has long cultivated gardens, growing her favorite roses and other bright bloomers. “It must be in my genes,” she says. “My grandmother won ribbons at the county fair for roses. My mom grew them too.” As San Diego’s drought intensified, Dale and Linda contemplated a garden redo to replace the lawn and get rid of an aging hot tub that dominated the back yard. Like their house hunt decades ago, the garden’s future was decided in an afternoon. After visiting a nearby water-wise garden with glowing succulent borders, rose beds and an orchard, Linda told Dale that was what she wanted.  “I loved all the color and that [the homeowners] 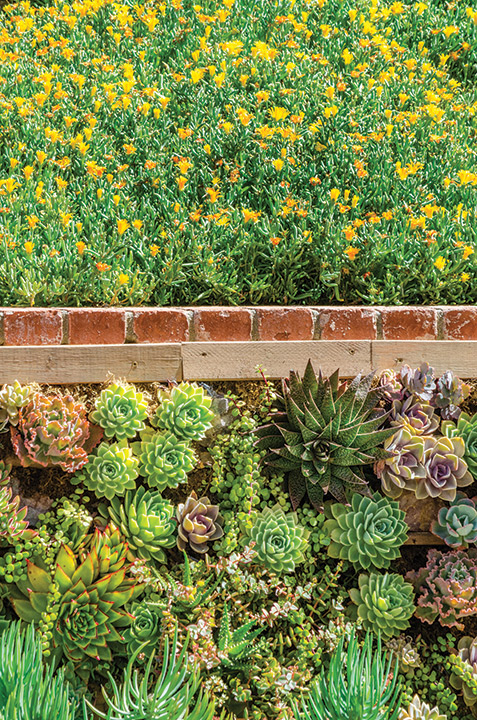 only watered once every week or two,” she recalls. The couple turned to veteran nurseryman Mike Hirsch, the designer of that garden and owner of Gardens by the Sea in Leucadia. “I used as much variety and color as I could so that everyday there’s a surprise somewhere in the garden,” Mike says of the three-phase makeover he completed in 16 months. Sunny ‘Lemon’ ice plant (the noninvasive Lampranthus) rapidly blanketing a streetside bank introduces the rainbow plant palette that stretches up the driveway past faux street signs for Thunderbird Drive and Hotrod Alley to the front door. Along the way, white ‘Iceberg’ roses gleam like lamps among hot-hued sedums, sundrops, kalanchoes, ‘Sticks on Fire’ pencil bush, aeoniums and small aloes. 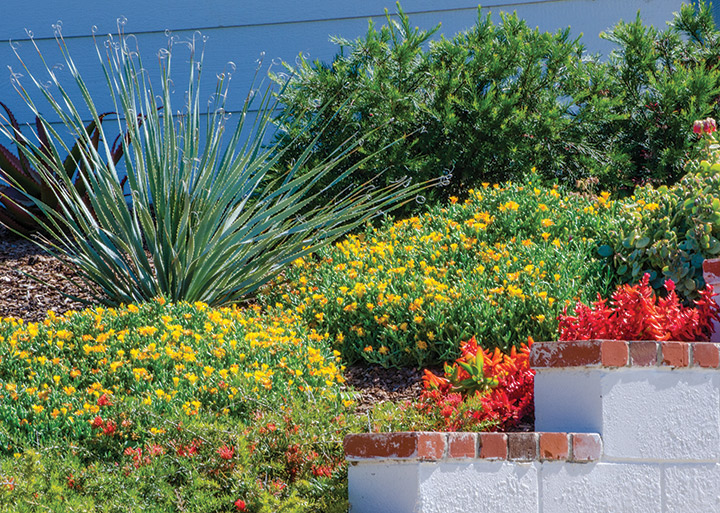 In the mix are a half-dozen varieties of grevillea: Australia natives with spidery flowers and one of Linda’s newfound favorites. Among them areground-hugging ‘Mt. Tamboritha’ with creamy pink flowers and shrubby ‘Superb’ and ‘Ned Kelly’ with coral blooms and yellow-flowered ‘Molongo’. Color sparkles in a trio of backyard garden rooms united by red brick hardscape. Rising behind them is a steep bank where more ‘Lemon’ ice plant encircles narrow-leafed birds of paradise, aloe rosettes and swaying bulbines. “Unlike others, this ice plant blooms every day the sun is out,” Mike says. Once home to a thirsty lawn, a sun-drenched garden is edged on 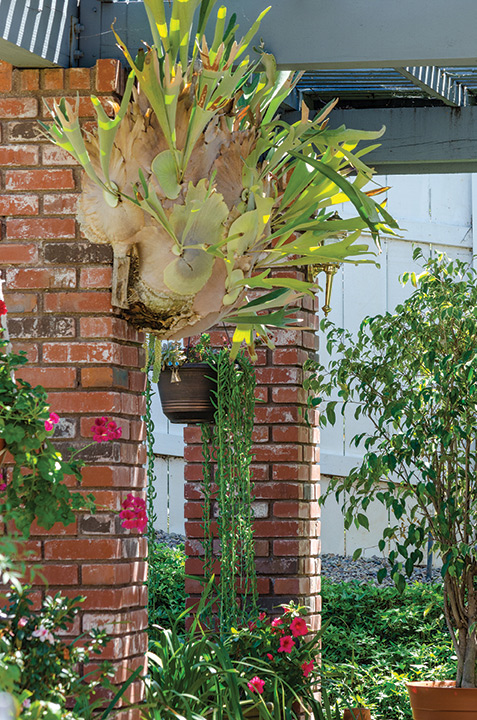 two sides by rose beds where Linda tends ‘Double Delight,’ ‘Mr. Lincoln,’ ‘Barbra Streisand,’ ‘Graceland’ and other classics. Between them lies a boulder-studded tapestry of succulents that includes spiny Madagascar palm, limeleaved breath of heaven, coast rosemary and other perennials among spreading groundcovers like dymondia and blue-green senecio. The centerpiece is a tiered fountain brimming with succu-lents, a feature Linda requested and Mike made carefree with his plant selection and drip irrigation. Nearby are a birdbath and a hummingbird feeder, gifts from Linda’s mother. Demolition of the hot tub created space for an arbor-shaded patio with cushioned seating overlooking a 24-foot succulent wall: an artistic blend of sempervivums, echeverias, sedums, graptoveria and the like crafted by Mike and his longtime associate, Pedro O’Campo. 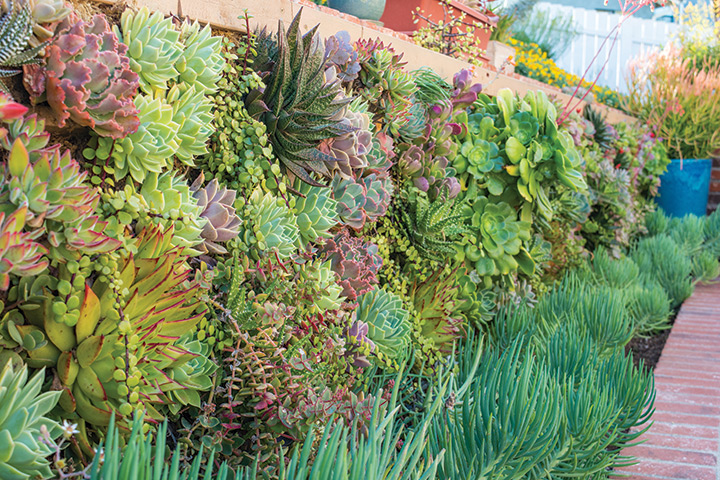 “Every couple of months, I spend an hour trimming and cleaning,” Linda says. “That’s it for maintenance.” Accents here and around the garden include blue ceramic containers overflowing with succulents grown from cuttings a friend loaded to overflowingin Linda’s SUV. Some fill hanging baskets around the third garden room, a covered outdoor kitchen and dining area largely untouched by the remodel. In its cool environs, a broad staghorn fern overlooks other shade lovers, including dozens of potted cymbidium orchids. Only one was blooming in late March, its many orange flower spikes enchanting hundreds of visitors as they explored the grounds on the Water Conservation Garden’s tour. “That cymbidium was a gift from my sister Christie, who died a few months earlier,” Linda says. “I could feel her hand in that bloom.” New to the world of succulents, Linda delights in the surprises that greet her on her daily garden strolls. “Look at this,” she says, pausing by a red yucca sporting its first tall bloom spike. “Every day there’s something like this. And that’s the joy — seeing all the things I didn’t expect.” 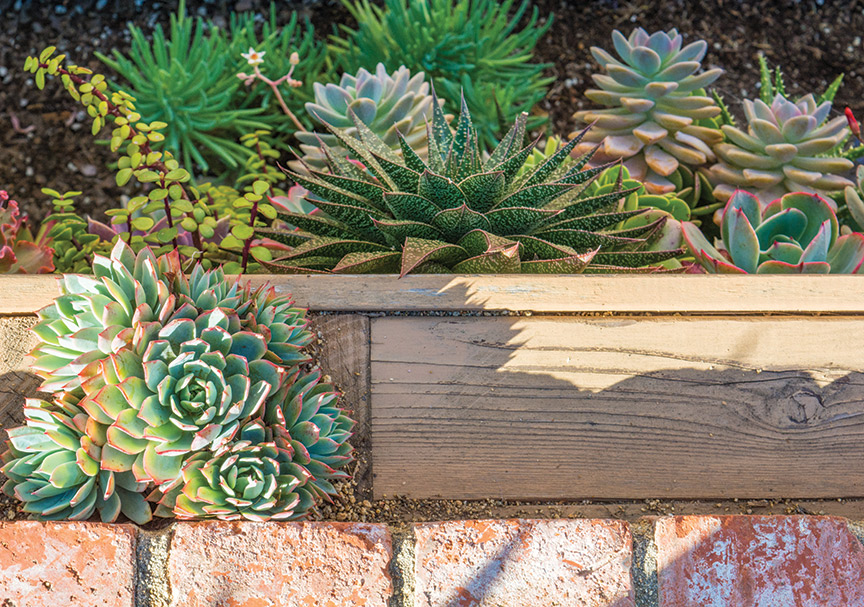