The Force of Fields

The disciplines of art and science come together in local exhibitions

Matt Dunn built a rotating structure with orbiting nodes like beads on bicycle-wheel spokes. He came up with the idea after viewing maps of neurons firing in the brain at Salk Institute in La Jolla. Matt is among 25 area artists, including five from Tijuana, who collaborated with local scientists for Extra-Ordinary Collusion, an exhibition running through July 2 at San Diego Art Institute in Balboa Park.
“I’m really excited to bring these two amazing communities together that don’t often have a lot of crossover,” says Chi Essary, curator of the event.
For this exhibition, she paired artists with scientists, who invited them to their labs and showed them their research and experiments. Using those experiences as inspiration, the artists explored new ways to develop, visualize and present their ideas — while connecting them to cutting-edge science.
“I know a whole lot more about neurotransmitters and synapses than I used to,” Matt says. Science fans and art enthusiasts are often different types of people. Events like Extra-Ordinary Collusion give them a chance to venture into unfamiliar territory. And the artists and scientists involved find opportunities to communicate their work to a wider audience and make it more accessible.
“I hope this inspires more projects and more people working together. Science and art are thought to be two different worlds, but I think there’s a lot we can learn from each other,” says Michael Avery, a scientist who studies how the brain influences perception. Some of the participating scientists were surprised to see that the processes they and artists go through when approaching their work aren’t that different.
“We both test hypotheses, not knowing how they’ll turn out,” says Thomas Albright, a Salk neuroscientist. “Getting people on both sides to appreciate similarities is good for our culture.” The SDAI exhibition appears to be part of a trend. 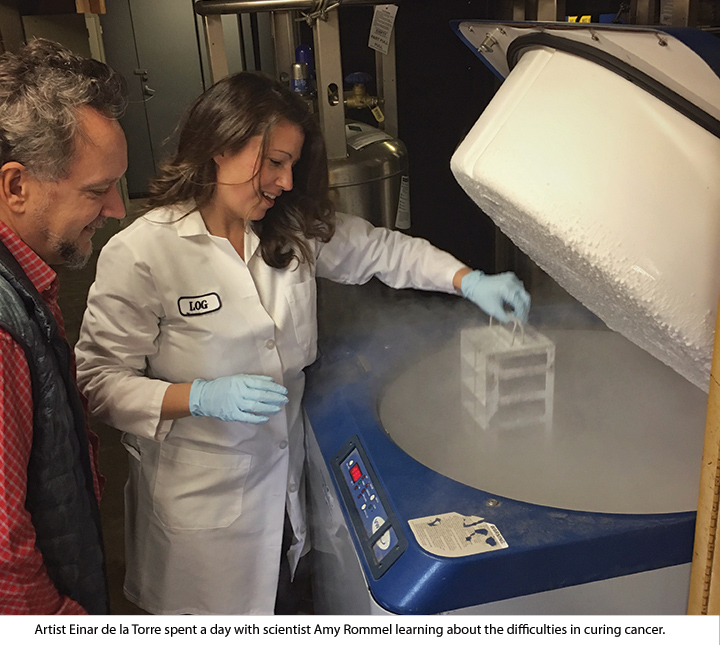 “We wanted to collaborate with our local art community and see what we could address with science,” says Ashanti Davis, curator of So Moved: The Art and Science of Motion at Balboa Park’s Fleet Science Center. Running through June 11, the exhibition presents artists’ conceptions of motion.
“San Diego has really embraced the idea of art, science and technology,” says Dave Ghilarducci, one of So Moved’s artists. One of his pieces features a chrome bike; as riders exert energy pedaling it, their efforts generate words from Aldous Huxley’s Brave New World on a screen in front of them.
Art and science lovers have plenty of other events in town to explore as well. La Jolla Historical Society’s Weather on Steroids exhibition illustrates Southern California’s vulnerability to climate change, drawing on expertise from scientists at Scripps Institution of Oceanography. The exhibit is on view at San Diego Central Library through Sept. 3.
Also downtown, on view through Aug. 20 at Museum of Contemporary Art San Diego, is Jennifer Steinkamp’s Madame Curie, a video installation about the work and life of the famous scientist of atomic energy and radioactivity. 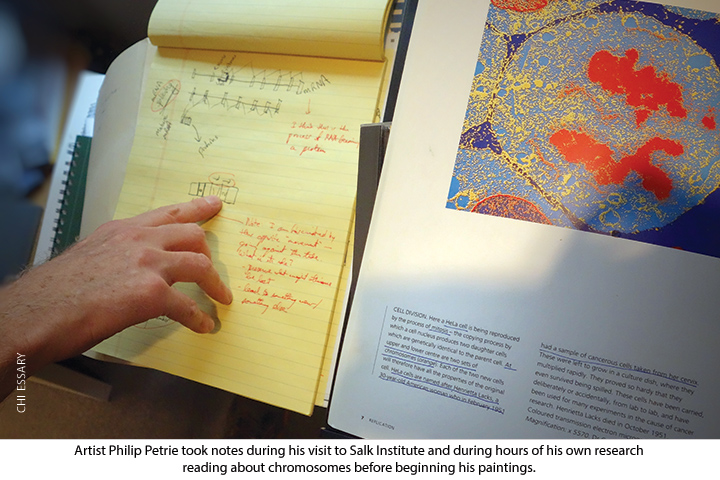 Educators and researchers have promoted science, technology, engineering and mathematics (collectively known as STEM) to draw more people into those fields and spur innovation. In recent years, STEAM — with art added to the mix — has “picked up steam.” Chi credits that initiative for the growth of science and art connections. In that regard, Abbey Hepner, an artist participating in Extra-Ordinary Collusion, will be teaching middle-school students how to use bacteria and algae that naturally illuminate like a living painting. To those who claim San Diego doesn’t have much of an art scene, Chi offers a promising spin: “We have everything we need to become a cultural hub, but we don’t see ourselves that way yet,” she says.
“I hope that [Extra-Ordinary Collusion] starts some cross-pollination and helps people get excited about what San Diego has to offer in the arts and the sciences. When you mix creative people, beautiful things happen.”

Ramin Skibba is a science journalist with a Ph.D. in physics and astronomy and a former assistant project scientist for UCSD’s Center for Astrophysics & Space Sciences. In March, he and fiber artist Dia Bassett were paired at Négociant Urban Winery for a special edition of Fleet Science Center’s Two Scientists Walk Into a Bar. The event was a partnership between the Fleet and San Diego Art Institute. Below is Ramin’s report on the experience as a participant in A Scientist and an Artist Walk Into a Bar. 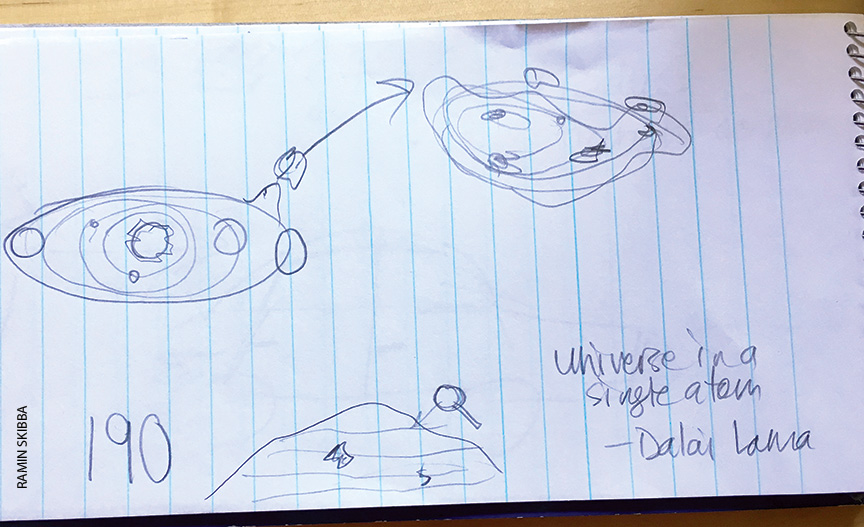 Paired Perspectives
Négociant Urban Winery patrons asked Dia Bassett and I questions covering a gamut of topics, including robots and quantum particles. A question about how Dia uses found materials in her artwork led to a more scientific/environmental conversation about recycling. Further discussion took place on energy use and transportation.
While we talked, Dia visualized our conversations by sketching on a notepad. When talk shifted to funding for space exploration and NASA, she drew rockets and planets.In all, we spoke to a dozen people about art and science — and talk continued after the two-hour event officially ended. Clearly, combining the dual disciplines that have roots in the physical world and creativity fosters a deeper dialogue about our place in the universe.
Categories: Lifestyles
Share this...