The World in a Home

Stunning artifacts from diverse locales the world over line the halls of their home. But for David and Arlene, the real treasures lie in the memories that each piece evokes. Vibrant rugs draw them back to the bustling bazaars of Morocco. Intricately carved corbels remind them of serene Chinese temples. Beaded headdresses transport them to the scorching plains of Africa. Despite enjoying the bustling life of foreign cities while abroad, David and Arlene sought something a little more tranquil at home. “We wanted a one-story house in a private area, one with a big back yard so that our seven grandchildren would have somewhere to play when they visited,” David explains. This prompted their move from Carlsbad to a remote, gated community in San Marcos. They brought in Jim Walters to aid them in refitting the interior and creating spaces throughout the home to best display their art and artifacts. Wide-plank, white oak flooring replaced the carpeting. “I love the simplicity that the white oak provides,” Arlene says. “The color is so calming and warm compared to the marble floors in our previous home.” Oak flooring continues throughout the house, except where walnut travertine overtakes it in the bathrooms and kitchen. Seamlessly integrated into the landscape of each room, Chinese carvings provide another constant. 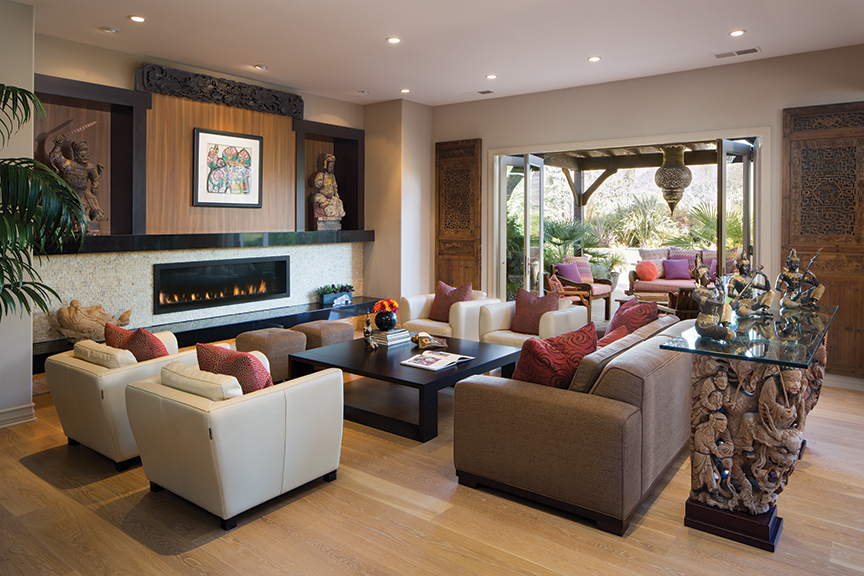 The wooden structures, each breath-taking in detail and part of a greater narrative, have been spliced to function as lintels, corbels and wall-art. Three grace the opening to the partially enclosed space that houses David and Arlene’s most eclectic collection: beaded crowns from the Yoruba tribe of Nigeria, worn by the kings of their people. “We bought the first one in Nigeria and have since added to the collection from online sources,” David says. “Coincidentally, one of my son’s closest friends from college was the son of a king of the Yoruba people. He came to visit our home and put on one of the headdresses and performed a traditional dance. We wish we had recorded it!” Jim designed this enclosure, made from espresso-stained sapele, with nooks and ledges aplenty to display the colorful pieces of headwear. David affectionately refers to it as “the retreat,” which additionally houses a richly pigmented Moroccan rug and pillows, a Thai tapestry and a custom vinyl and nail head chest, also by Jim. 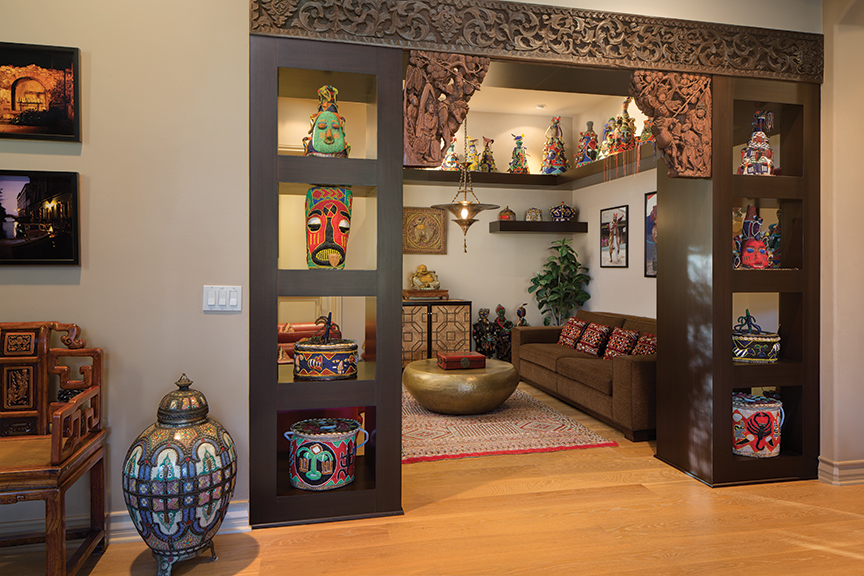 Directly outside this space stands an ornate vase in blues, greens and reds. David and Arlene identify it as one of their favorite pieces, acquired on a trip to Fez, Morocco, where an outing to the bazaar resulted in the majority of the Moroccan items in their collection. “The streets of the market are very narrow. You’re pressed in this small space teeming with people and noise,” Arlene says. “We had a donkey following us, piled high with all the textiles and art that we had bought,” David adds. At the end of the adjacent hallway is a vignette, arranged by Jim, consisting of a silver and bone chest and a corona of metal hamsa hand amulets fanning out on the wall behind it. A more-than-100-year-old bejeweled ornament, also from the Fez bazaar, sits atop this display. In this hallway, and sprinkled throughout the house, are enlarged photos that they have taken on their travels. David loves to shoot film and estimates that they have over 10,000 photographs. Close by lies the master suite, featuring a bed whose frame undulates in a manner reminiscent of waves. A console, created by Jim to mimic classic Japanese step-style Tansu cabinets, dominates the wall opposite the bed and houses relics from Asia and Afghanistan. Redesigned by Jim, the master bathroom revolves around a freestanding tub in black granite. Crema Marfil marble countertops contrast the dark tub and vessel sinks, while sapele cabinets visually warm the space. French doors open to an intimate serenity garden, where a stone Buddha rests atop a ledge on a backdrop of river rocks. 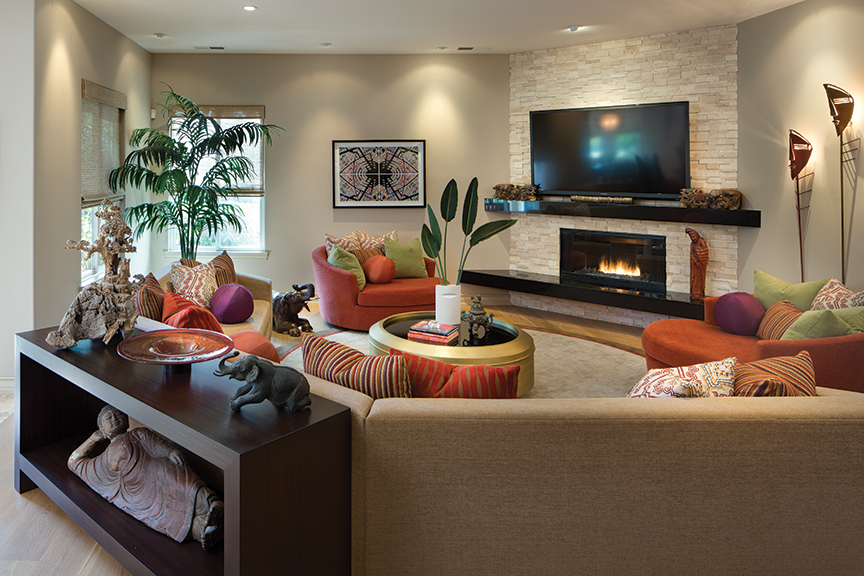 A similar statue, in bronze, gazes through the dining room window at a sleek table with a jewel-toned chandelier presiding above it. “It takes 20-some bulbs to light, and it creates the most fantastic mood lighting when it throws around a spectrum of colors in the evening,” David shares. An indention in the nearby wall houses another of Jim’s designs: a console of Australian walnut with an Absolute Black granite top. Perched on the shelves above it is a set of Chinese guardian lions, crafted from blue lapis and inlaid with precious gems. “We saw them in a Chinese antique shop and, despite the price, we just kept coming back to them. So we knew we had to have them,” Arlene says. A sizable fireplace — immersed in honey onyx, split-face tile — defines the sitting room that shares an open floor plan with the dining room.
“There was an open closet in the room on the other side of the wall that became this recessed area for the fireplace,” Jim says. Above the fireplace are two custom-built niches made from Australian walnut and bordered by sapele. Upon them sit fierce-looking statues with human hair. “They are prayer statues from a Chinese monastery,” David explains. “There are compartments on the backs of their necks where people would put scraps of paper with their prayers written on them.” 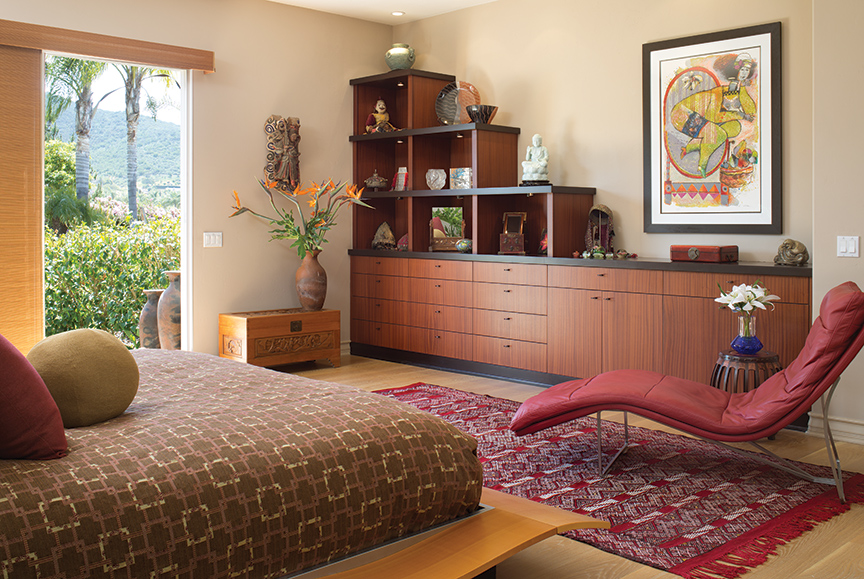 A sofa and four chairs display a variety of red pillows. “I designed them with an exotic look in mind to fit the rest of the home’s décor,”
Jim says. A table constructed from two Chinese corbels topped by a slab of glass displays figurines of three Thai musicians. French doors, flanked by Chinese doors from the 1800s, lead to a patio filled with sunlight and teak furniture. A wooden pergola, featuring a bamboo roof that reminds Arlene of Morocco’s bazaars, stands over a Balinese daybed and supports a grand Moroccan lantern. In a guest bathroom, enlarged by the removal of a wall, hang three pieces of framed African fabric. Near them a trio of floating shelves display artworks, including a carved jade pot on the middle tier. Colorful lamps from Marrakesh dangle over an Orion granite counter with a black granite, vessel sink. Circular furnishings define the living room: two burnt orange, swivel chairs; a modern, gold coffee table; and a rug that ties everything together. An extensive sofa in three sections maintains the circular grouping, as do spherical pillows in pumpkin and plum. “Our grandkids love to try and claim a whole one for themselves,” Arlene says of the spacious chairs. “This entire space is perfect for when we have our family over for game nights.” 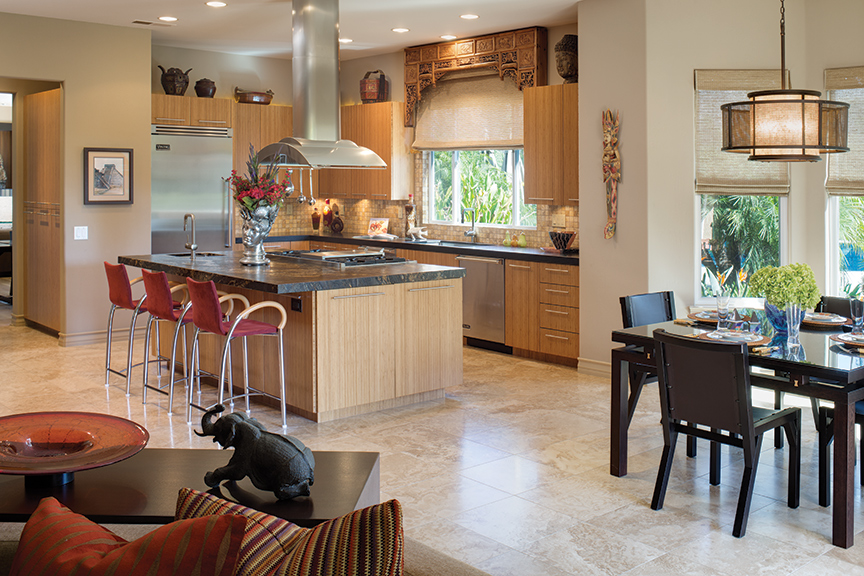 A fireplace, angled in the corner of the room, was moved back 2 feet to create additional space. Jim faced it with a mosaic travertine for a look reminiscent of the sitting room fireplace. On its mantle rest two more Chinese corbels, depicting ferocious guardian lions. David had them altered so that candles could be placed upon their backs. Between the sofa and one of the chairs rests a detailed carving of a kneeling elephant with its trunk lifted over its head. “It was carved from a single block of wood,” David says. “We got it while we were in Thailand from a warehouse that seemed practically endless and had tons of carvings waiting to be shipped all over the world.” The adjacent kitchen was wholly redone, giving it a fresh flow. Bamboo cabinetry and volcano granite countertops with a leather finish provide luxurious texture. A carving over the sink that was once part of a Chinese canopy bed and sand-shaded travertine backsplashes complete the look. On the center island rests a peculiar silver vase: the face from the famed statue of David with a crown of seashells. “It reminds me of the time years ago that we were staying in Florence and I got up early to go shoot some film,” David offers. “I stumbled across the statue of David [in the Galleria dell’Accademia] and it was completely deserted! It was a once-in-a-lifetime opportunity to shoot it, but someone who looked like the cleaning lady found me before I could start taking pictures and chased me out!” Next to the refrigerator is a family photo taken at the Chichen Itza Mayan ruins in Yucatan, Mexico — another cherished memento in a home dedicated to the pres-ervation of memories through as many art forms as possible. 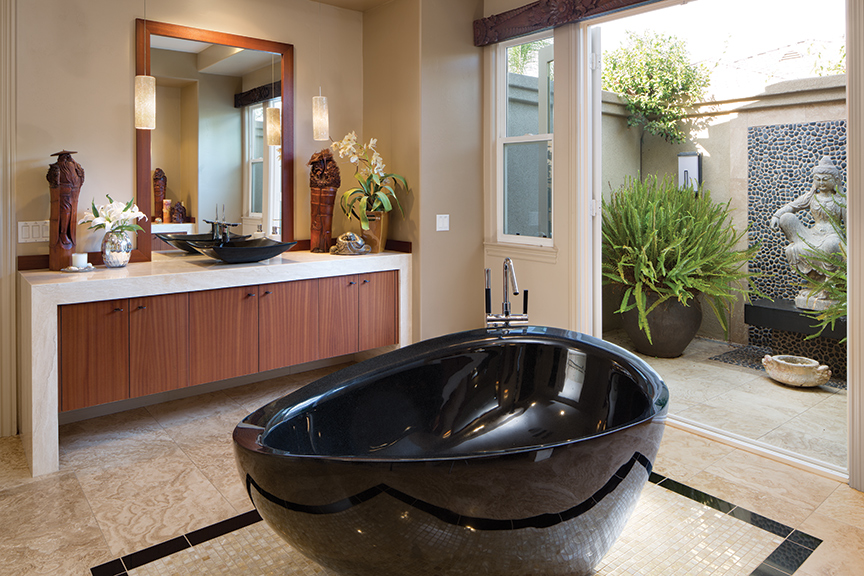