Trek through San Diego County, past roadside veggie stands, rural mailboxes and eucalyptus trees, and on a hill you may glimpse an out-of-the-rectangular-box, Mid-century Modern home that appears futuristic and as though made entirely of glass. The area’s remoteness makes the residence difficult to find. Once located, though, you can’t get lost in the one-bedroom, single-story house. It forms a closed loop. “It’s a 12-sided polygon with floor-to-ceiling glass walls,” homeowner Lisa Cronin explains. A mathematician would probably use the peculiar term “dodecagon.” And so might have the late Kemper Nomland, who created the unconventional, post-and-beam structure in 1957. The ease of construction, prudent use of materials and melding of indoor/outdoor living echoes the 1950s aesthetic of Arts & Architecture Case Study houses. There’s a reason for that: The architect, along with his son Kemper Nomland Jr., designed Case Study House #10 in Pasadena. “When I started looking online for modern homes and came across this on a site that said, ‘Coming soon for sale,’ I was so excited. It was the home I wanted,” Lisa says. “At the time, my husband, Dennis, and I were living in a two-story, four-bedroom house in San Marcos. Since the kids were grown, we were ready to downsize. We knew we wanted a single story, and we wanted modern.” 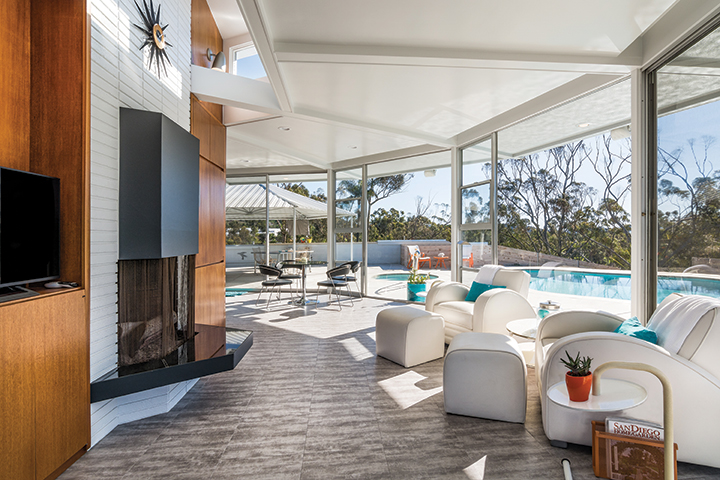 The home’s 360-degree views, which stretch from the surrounding hillsides and canyons west to the ocean and Catalina Island, provided an impressive selling point, as did the natural light that flooded through all the rooms via the see-through walls. Lisa embraced the home’s seclusion. “I like all the land around me and the remoteness. I can open every window and I won’t hear noises from any neighbors, because they are not nearby. And I don’t need curtains. If people want to see me, they can use binoculars,” she jokes. The home’s potential far outweighed the problems that needed tweaking or, in some cases, overhauling. Jalousie windows, for example, were perfect for previous owners who only used the residence during summer. For Dennis and Lisa, who planned to be year-round residents, their louvered charm quickly faded during cooler months. Tempered-glass windows with aluminum frames were an apt substitute. “When walls were taken down to replace electrical wiring, which was all bad,” Lisa says, “the inspector made us add insulation, because there was none.” 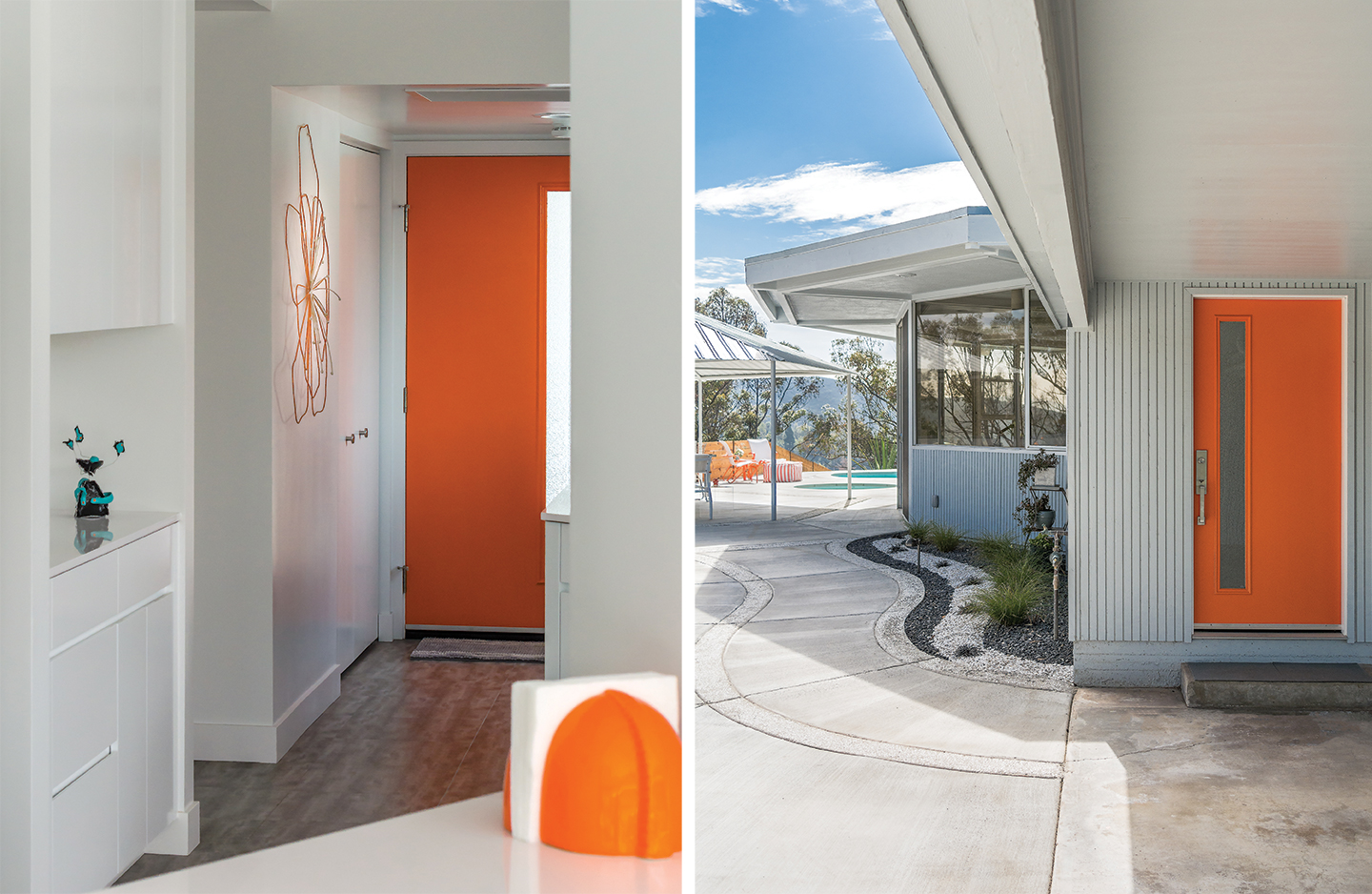 With glacier white paint covering red fireplace bricks and replacing much of the veneered Philippine mahogany wall panels and crisp gray, luxury vinyl tiles taking over from terra cotta flooring, the home now basks in a light and breezy atmosphere. Dollops of orange and turquoise in accessories dot the home with a forever-summer feel that begins through sliding glass doors that open to an airy, all-white kitchen.
“Most of the remodeling was done in the kitchen,” Lisa says. “There was a big pantry with a lazy Susan that made the kitchen feel compartmentalized. I took that out to create space. I also removed cabinets to open up the bar area. Now when you stand in the kitchen, you have a view of the pool instead of a wall.” A chrome and glass table paired with four chrome-framed chairs upholstered in black leather demarks the open space next to the kitchen as the dining area. A few steps away, two Art Deco-style armchairs in white leather face the living “room” fireplace. Casually propped turquoise pillows reflect the aquamarine water of the pool — a restful backdrop that beckons from beyond the window glass. 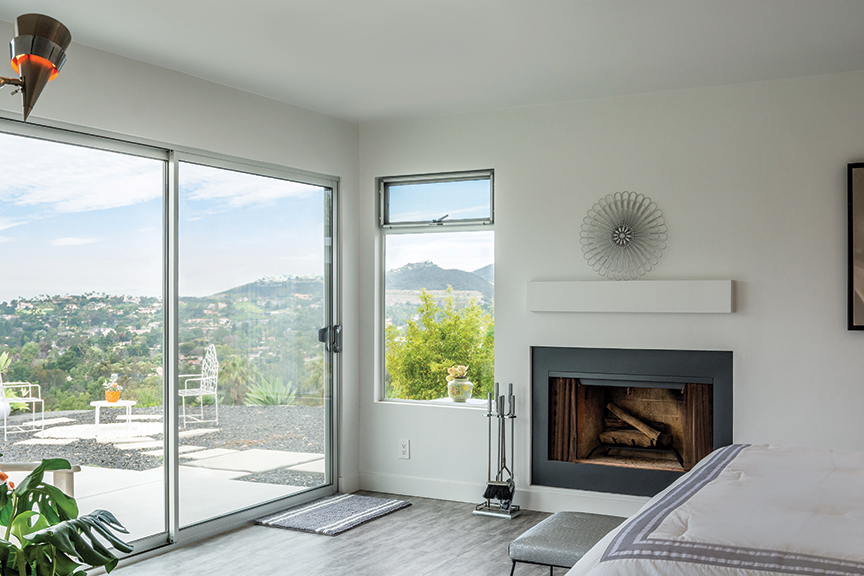 Next to the fireplace, around a wall angle, a powder room (referred to as the “circle bathroom” because of its round backsplash tiles) offers a second lavatory. Adjacent to that, a tiny home office hides behind closet doors. Although the simple storage space only houses a desk, its original slider cabinets are a highlight. A barn door replaced accordion doors to close off the 1980s add-on bedroom from the living space. The original bedroom became the master bathroom with a dressing area. Lisa and Dennis took out the bathtub and moved the doors to accommodate one large shower more in keeping with their lifestyle. Wander through a swinging door and, voilà, you are back in the kitchen space with its lookout to the pool and its cement deck. “[The area around the pool] was all mud before,” Lisa says. “Originally, they had a small cement border around the house, but we made that wider and curvier to match the curves in the pool and give it some softness.” 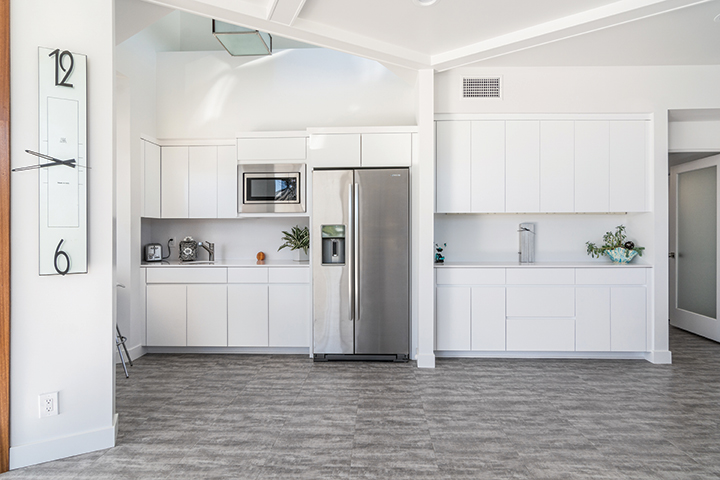 Although Kemper Nomland Jr. originally landscaped the property, whatever he had accomplished had long since disappeared, and the front and back yards needed reworking. “There were a lot of overgrown clumps of Agave attenuata spread out in the backyard area,” says Emma Almendarez, who helped Lisa and Dennis with relandscaping. “I thought they would look better along the length of the west-facing fence line, so we moved them with an excavator and Bobcat. In general, the new design reflects the simple, sparse look that’s similar to the modern/contemporary landscapes being installed in Palm Springs.” In other words, the landscaping does more with less — just like the house and, below it, the sleek, rectangular guesthouse where Lisa’s father resides. “I feel like I’m on top of a mountain, on top of the world,” Lisa says. “I’m free.” 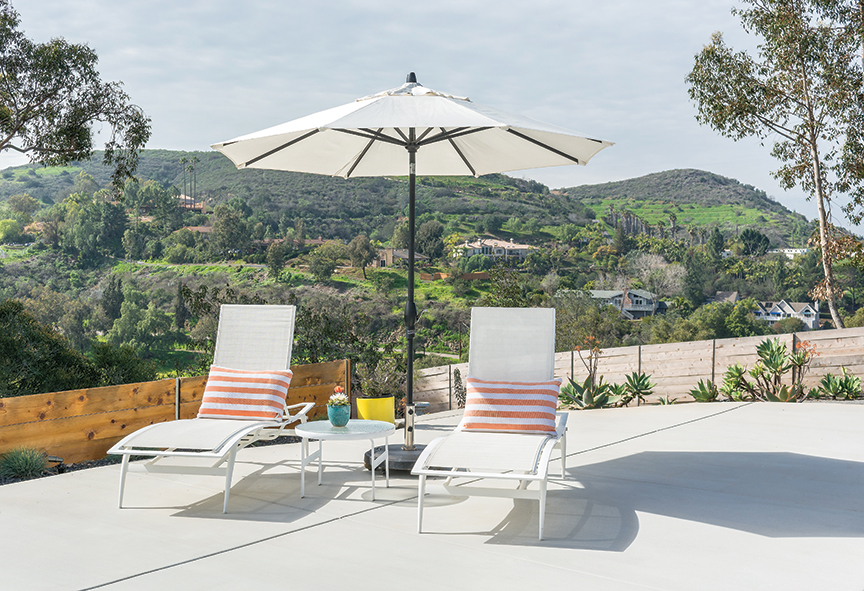