The Bold & the Beautiful

Whenever designer Gay Butler presented Debbie McGraw-Block with three hues of a color, the Cardiff homeowner chose the brightest one. “I have never been one to shy away from color,” Debbie says. She and her husband, Rennie, purchased a 24,400-square-foot, California Cape Cod-style home in 1985 and brought color to the interiors one room at a time. “We started buying art and picking different colors for each room. I never wanted a uniform color throughout the house,” Debbie says, noting that she and Rennie, who died in October, loved visiting art-centric Laguna Beach, where they sourced part of their collection. They also bought work locally, including from an art dealer in Leucadia with whom they became friends. Colorful and with touches of whimsy, the collection has “consistency,” Debbie says, “because when we found an artist we liked, we bought several pieces of their work.”

The art guided Gay in a large-scale renovation of the home in 2001 and more recently in refreshing spaces by way of reupholstery and paint.
In selecting new colors for the living room, Gay took her cue from a representational painting of a leopard above the fireplace. From that, she chose multicolored check fabric to cover a bench and sofa cushions. “I liked it a lot with the existing rug,” she says, adding that she begins a mix-and-match process by using “one of the loudest things on a small piece.” The checks simultaneously match the blocked colors of a ceramic car sculpture on the coffee table. Picking up other colors from the checks, Gay and Debbie chose fabrics in solid purple and a wavy-patterned teal for chairs and in gold stripes for the sofa. From the upholstery, Gay then chose paint colors. Teal for the wall above the fireplace matches the chairs while making the leopard painting leap from its background. The surrounding, buttery yellow walls and ceiling provide a softening effect for the deeper hues and match the leopard’s fur. 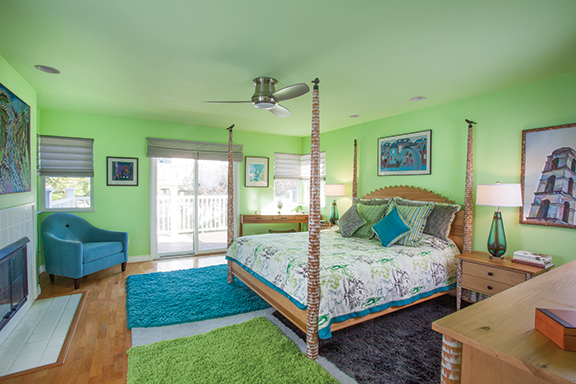 “I distribute pattern and color around a room so it does not look too heavy in one place,” Gay explains. “This is one of the loudest I’ve done, but it’s so fun. Most homeowners do not have the gumption to be this brave with color.” “I weave, so I have an appreciation for pattern and fabric, but I have to rely on Gay,” Debbie says. “She brought a hundred fabrics to compare. “There were some things about the living room we were not changing, like a purple chair that looked good. The two teal chairs were purple. One was purple with gold running through it. But my cats [Cleopatra and King Tut] were not too nice to it.” A kitchen pass-through/dry bar reveals more color beyond the living room. In this go-round, Gay and Debbie chose brighter hues than 15 years earlier. Wall surfaces transition from apple to orange to yellow. Built-in bench seating features cushions in purple, orange, green and blue — across from which sits a freestanding bench upholstered in fuchsia. One of the tricks that Gay used to pull together the disparate colors was to paint the edges of cabinet door center panels green, orange, purple and blue. The only major change was repainting the kitchen ceiling, which had been dark green, to the same buttery yellow as the rest of the ceilings.
The fuchsia bench has a twin in the family room around the corner, where the bright shade of pink picks up one of the colors in the custom rug Gay designed 15 years ago. Other hues in the rug inspired orange, green, blue and yellow wall surfaces and the reupholstered sectional in orange with pillows in a print that incorporates all the colors. 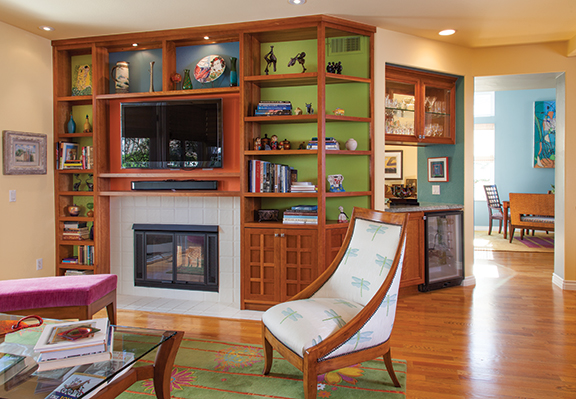 Because Debbie wanted the room to “feel different” in the refresh but liked the use of multiple colors behind built-in shelves, Gay also “redistributed” the blocks — for example, reversing the roles of blue and orange behind and above the television. Upholstered in indoor/out-door fabric, an accent chair did not need refreshing. Its blue and green dragonflies pick up those colors elsewhere, while the white background matches the fireplace surround and hearth. The master bedroom walls concentrate on one color: lime green. Gay asked Debbie if, after 15 years, she was tired of that bright hue. “She said, ‘No, I want to do it again,’” Gay recalls. “Other than a child’s room, that’s the loudest bedroom I have ever done.” “I can’t tell you how happy it makes me to wake up and look at that color,” Debbie says of her lime surroundings.
To re-create the space, Gay switched out multicolored shag rugs in blue, silver and charcoal with rugs in lime green, bluish teal and gray and replaced off-the-shelf bedding (primarily black and white) that Debbie had purchased with custom bedding matching the rugs, walls and artwork in the room. The only chair that remains unchanged is a teal easy chair. Gay also had custom furniture made, including a triangular dressing table for a corner. 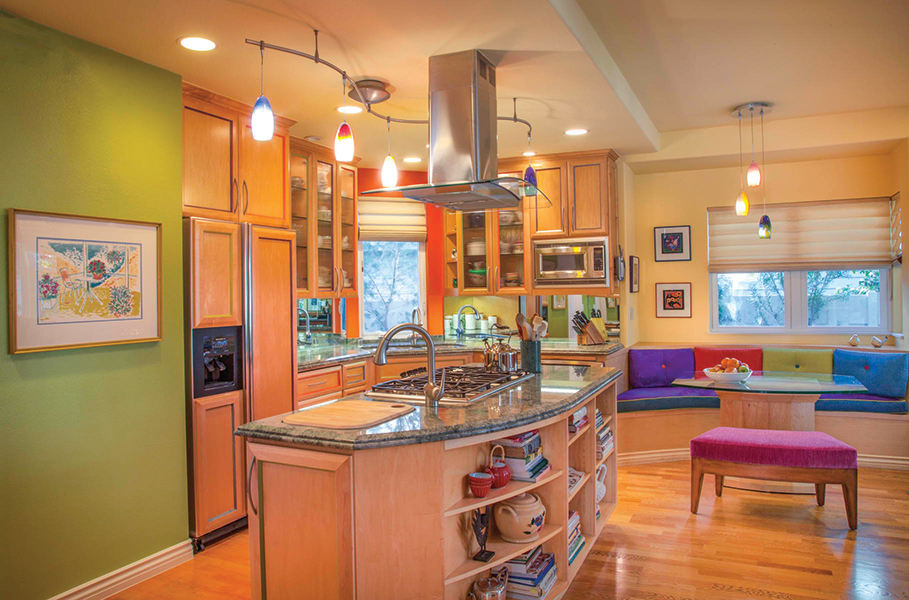 “I had my faux painter do the posts and legs of the case goods,” Gay says. Iron birds perch atop each of the tall bedposts faux-painted to resemble feathers — a teasing tribute to the cats, who hide under the bed when strangers are in the house. Although Gay was essentially refreshing interiors, the back yard presented her “a blank slate.” It was ready for color after Debbie and Rennie’s recent attention to landscaping with help from local gardening expert Nan Sterman and the addition of a small deck and fireplace. Properly scaled furniture for a small yard and “small people,” as Debbie describes Rennie and herself, was difficult to find — until a fortuitous trip. “I went on a garden tour with Nan to Santa Barbara in 2015,” Debbie recalls. “We went into a large garden store and I saw Fermob furniture that was sized for small people, and it was colorful. So I didn’t forget that.” She mentioned the line to Gay, who then found a striped fabric that not only coordinated with Fermob furniture, but also with the interior colors of the living and family rooms that look out onto the back yard. Gay thought it would be fun to add a hanging chair in the mix, but had trouble sourcing one. “They’re generally made with macramé. I could only find natural rope and brown. That wouldn’t work here — no way,” she says. Eventually, she found one in blue, green and white from Anthropologie and enhanced it with cushions in a butterfly print that is “a sister” to the dragonfly fabric in the family room. 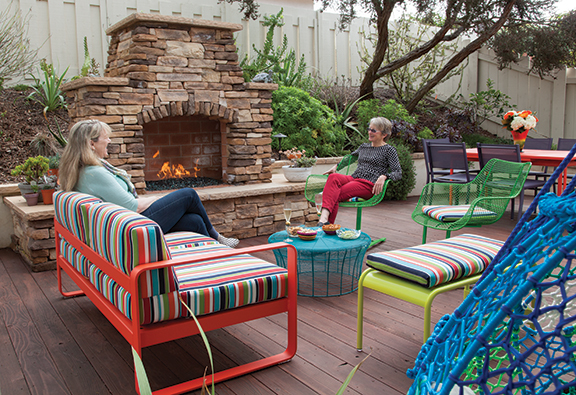 “This project was so much fun to work on,” Gay says, admitting that her own Spanish-style house is white and that most of her clients want neutral hues. But perhaps the best reward is in Debbie’s own voice: “I really can’t express enough how happy my house makes me feel.”