The paved lane, ever narrower, winds up a steep northwest slope of Mount Soledad above La Jolla’s village. Beautifully crafted, cobblestone-lined rain gutters flank the roadsides. Eucalyptus branches sway overhead in an ocean breeze. The first view of E.B. and Andy Chedrick’s residence, clad in grooved redwood, prompts one to sort through various architectural DNA for clues to its origin. It would be easy to believe that the home’s bloodline links to Frank Lloyd Wright’s maxims for the “natural house.” 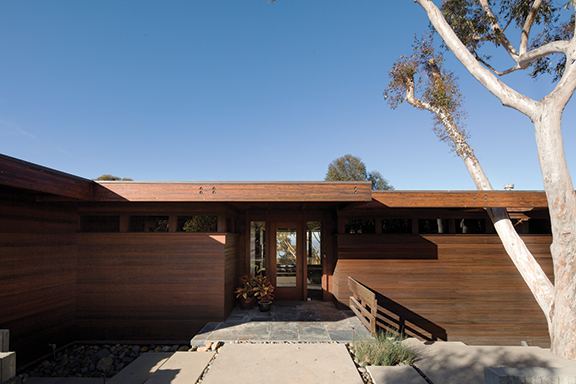 “The house was designed by Frederick Liebhardt as one of four he did on this street, and it definitely has a Usonian influence,” says architect T race Wilson, referring to Wright’s concept for middleclass-family dwellings. T race led the home’s restoration, which included interior-space rearrangements, in collaboration with E.B. (his sister) and Andy. Indeed, Liebhardt (1924-1999) spent a year studying and working as a Taliesin Fellow under Wright shortly after World War II. He later worked with San Diego’s mid-20th century greats Lloyd Ruocco and Henry Hester, before striking out on his own and forming a partnership for many years with Eugene Weston III. Dating back only to 1993, the Chedrick abode stands as a natural and timeless house. E.B. and Andy found it in 2013 when they weren’t even looking. “But we realized right away it could satisfy both Andy’s love of wooden houses and my love of Mid-century Modern,” E.B. says. “It needed some TLC, but we knew, with T race’s help, we could provide that.” “They appreciate that what you don’t touch in a house is as significant as what you do,” T race says. “And when you must add something, do it in a progressive way.”
One of the biggest challenges was saving and restoring all of the exterior woodwork, which was rain stained and sunlight raw from years of facing the elements without being re-oiled. 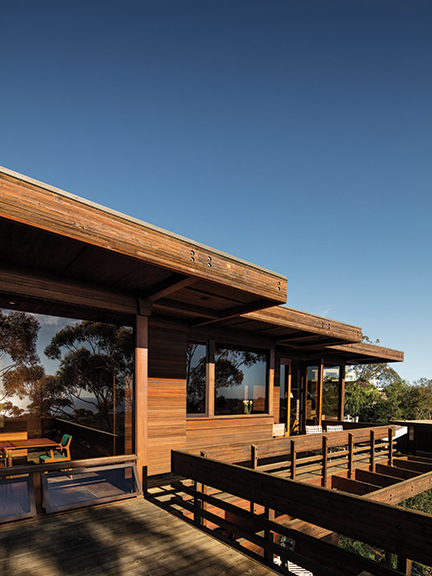 “The first painter we interviewed walked up and said, ‘This house doesn’t scare me!’” E.B. recalls. “So I said, ‘OK, then strap yourself to the scaffolding and go at it!’” After many weeks of power washing and hand brushing, the siding looked like new and now glows under a protective coating. A walk through the house is a journey amid a constantly changing — but never confusing — spatial dance of contrasts: low- and high-ceilinged, light-filled and dark, open and enclosed spaces. Cantilevered on more than 50 caissons above the precipitous hillside, the back portion of the structure floats in the treetops. Smooth-trunked eucalyptus trees lace the ocean view, while casting gauzy afternoon shadows across interior floors and walls.

Inside, the eye seeks the sea’s horizon but is not bedazzled by its brightness, thanks to a flat roof with trellis overhangs. Original redwood paneling upstairs matches the exterior siding — another subtle way that Liebhardt broke down the barriers between indoors and out. Most day-to-day living for the empty-nest couple takes place upstairs in the large family, kitchen, dining and living areas that easily flow together. Slate floors exemplify Liebhardt’s love of natural materials, and radiant floor heating keeps the house comfortably warm despite its massive amount of glazing. The kitchen was reworked through the addition of mahogany cabinets, an island, new lighting and new appliances. An “incision,” as T race calls it, in one wall now opens this once-closed-off workspace to the serene dining area — and more views — beyond.
The master suite at the north end of the house is reached by an open passageway lit by clerestory windows that bring in morning light. New cabinetry and fixtures brightened the master bath, but Liebhardt’s signature soffit lights remain the same. Original tiles around tubs and showers were saved when possible. The same touching up held true for an upstairs powder room and three bathrooms downstairs. Downstairs spaces presented T race with a real challenge. Set against the hillside, the lower level received limited natural light; so gloom prevailed. 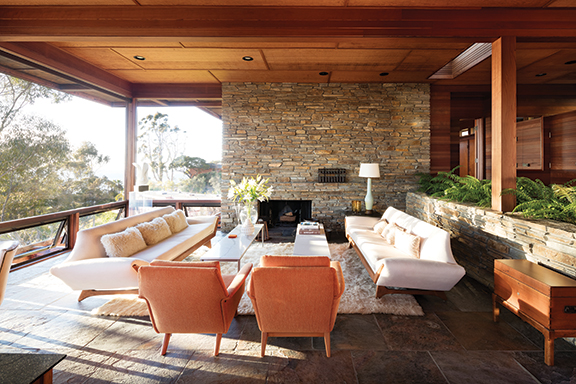 “Walls and ceilings were all plywood and seemed to suck up any light,” T race recalls. He brightened the spaces through the judicious use of drywall and new grooved redwood paneling that matches the exterior’s exactly because a local lumber company was able to find the original saw blade used on the house’s millwork. All bedrooms originally had very linear desks or cabinets built in close to the windows overlooking the canyon (muchlike at Taliesin). In a nod to the site’s in-credible views, however, T race removed them to allow the eye to travel more freely — without interruption — to the horizon. “We turn very few lights on at night,” E.B. says. “Every sunset changes the color of the interior wood. The stone fireplaces [one in the living room and another in the family room open to the kitchen] are real works of art. At certain times of the year, we wake up as the moon sets over the ocean. Every day we think we’re on vaca-tion, because there’s something very soothing about living in good design.” 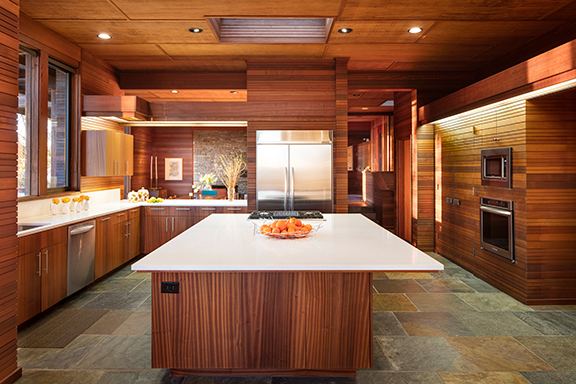