26th Annual Kitchens of the Year

A Spoonful of Modern
Photography by PreviewFirst

See-through, glass-globe pendants gleam above a center island topped by rich Taj Mahal quartzite with a leather-satin finish that feels almost like velvet. The contemporary edge of these elements, along with sleek plumbing fixtures and chrome cabinetry hardware, are a tad surprising in a kitchen redo for a classic La Jolla residence designed by Thomas Shepherd. 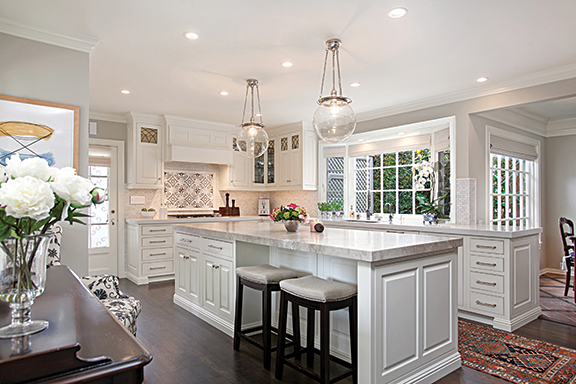 Homeowner Carla Rehm says that, although she didn’t want to go too wild in the update, she wanted to add elements beyond the traditional — “something that would make it pop.” Tatiana Machado-Rosas of Jackson Design and Remodeling provided the know-how for gently including the desired modern vibe. Even the perimeter countertops of PentalQuartz have a more current sensibility. Their clean, white tone with soft gray veining complements the white marble backsplash done in a mini subway pattern. Tossing a few contemporary elements into the mix gives the kitchen a fresh look. But because the home has historical significance, the main gist of the remodel honors its Colonial character. “Working with the existing interior architecture was key to maintaining the home’s personality in the kitchen,” Tatiana says. “We brought formality in by repeating the crown moldings found in the rest of the house. The beautiful windows with grids that we installed are similar to what is contained in the rest of the house.” The updated cabinets are not exact matches to the simpler, clear-glass cabinets in other parts of the home. By including leaded glass and other details, the newly installed cupboards offer more elaborate aspects than their less-frilled 1939 counterparts. 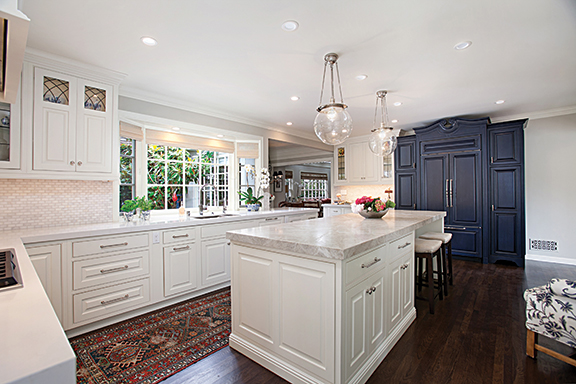 “The original kitchen had hanging cabinets between the kitchen and the breakfast room,” Carla says. “Tatiana wanted to remove them, but I was afraid that the breakfast room would not look like a separate room anymore. I also was afraid to lose storage. But after talking with Tatiana and agreeing to get rid of them, I was thrilled when I saw the difference it made. More light comes in. Everything flows better, and now there is a huge opening leading to the garden room next to the breakfast nook. “Sometimes you live with something for years and you think it should stay the way it is,” Carla explains of her reluctance to oust the extra cabinets. “It’s hard to visualize something different.” To replace lost storage space, Tatiana designed a hefty, walnut cabinet — painted navy blue — that works as pantry space, as well as a hiding spot for the refrigerator. With the intricate detailing of a period piece, the bureau is reminiscent of the home’s origins. “I love it,” Carla says. “I have antique blue-and-white dishes and ginger jars, so this worked very well. “In fact, the entire kitchen works well,” she continues. “It’s warm and bright, filled with light and a great gathering place for friends and family.”

Perking Up a Cup of Party
Photography by Brady Architectural PhotographY

When Lauren Essex saw the quote, “I want a kitchen so inviting that friends come over uninvited,” she could not have agreed more. And, she says, that is exactly what she and designer Traci Taylor achieved in her Del Mar home. “The new kitchen is a party waiting to happen,” Lauren says. “I love to entertain. The old kitchen was too small, but that didn’t stop me from inviting 50 people to the house. This kitchen is so conducive to having guests. I’ve had everything from intimate dinner parties to stand-up gettogethers and from wine tastings to women’s networking events. Everyone has a blast.” 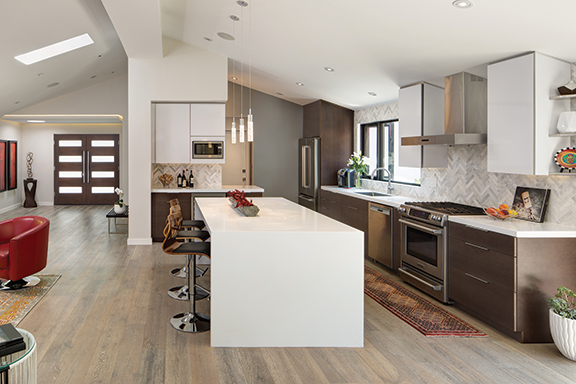 The update included tearing down a load-bearing wall be-tween the kitchen, dining and living rooms, as well as pushing the house out 10 feet at the entry to achieve an open floor plan “for the way people live today,” Lauren says. “To integrate the living room with the kitchen, we created soffits in the entry so that the entire ceiling, instead of just the living room ceiling, became vaulted,” Traci says. “We designed an open area for a grand, A-shaped room that has much more visual space.” Borrowing 3 feet from the garage allowed T raci to fashion a nook to house the washer and dryer. Previously located in the garage, the appliances now hide behind a wall where the kitchen’s wine cooler sits — an added bonus, Lauren says, that allows her to stash “all the stuff I don’t want people to see.” “The neutral color palette of mostly whites, grays and browns is soft on the eye,” Traci says. “There are about four different grays in the paint color, tile and flooring. There also are varying whites, which are always interesting to try to match. Accent colors show up in furniture pieces, art and pillows. Rift-cut, wenge cabinets mix with white gloss cabinets for interest. The whites on top keep the space light and airy. Choosing a darker color for cabinet bases creates balance and grounding with the gray flooring.” The wood floor replaced car-pet and big, ceramic tile squares separated by heavy grout lines. An added skylight and new glass doors flood the room with light, while providing Lauren with the indoor/outdoor lifestyle she sought. 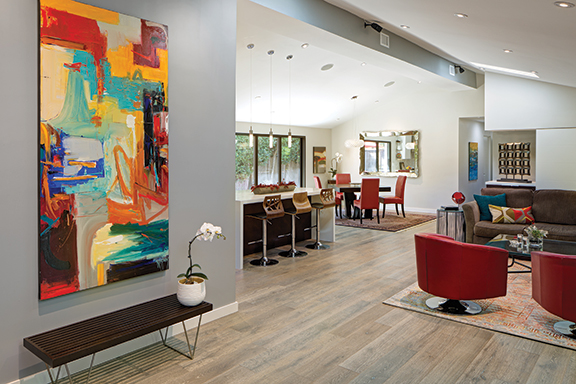 “It is magnificent when you open the doors up,” she says. “I had a party here that involved a homemade triathlon. There were a lot of people here, and some of them wanted to get out of the sun. With all the doors open, they were sitting in the dining room, watching the kids’ races going on outside. Everyone was a part of the event, even though some people were inside and events were outside.” With a balance of practicality and style, the new kitchen has “staying power,” Lauren says. “I feel like I am going to live in this kitchen a long time and it’s going to function and be timeless.”

Interior designers and home-owners often call out the backsplash as their kitchens’ focal point. Not so in this winning Encinitas kitchen. Both homeowner Joe Michniewicz and designer Megan Siason named the island as the front-and-center hot spot. “I think one of the biggest items, aside from adding square footage, was bringing in the elongated island,” Megan says. “The huge lack of storage space, combined with just two landing areas for the countertop, made the previous kitchen insanely inefficient. This island’s counter space offers a lot more surface area for baking, prepping and eating buffet style. And we gained a lot of room for storage within the island.” 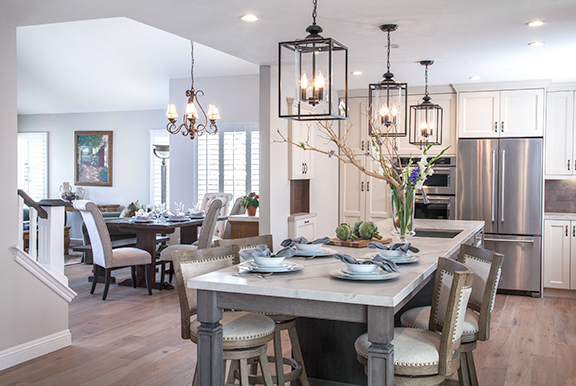 The top of the 13-foot island, as well as the perimeter counter space, conjures up the elegance of marble but consists of durable quartzite. The casual, traditional air of the island’s turned legs, chunky base and accompanying driftwood-look swivel chairs offset the luxury of the stone’s contemporary, satin finish. The play between the two styles has purpose. “We wanted the 1980s builder’s kitchen to become more open and modern yet match our Old World-style home and traditional furniture selections,” Joe says. “The new kitchen is a crossover between traditional and modern. It has an updated look without feeling like you are walking into a style that was forced.” Cool shades of whites, blues and grays for countertops, cabinetry and stainless steel appliances neutralize traditional design. The hues rule with a light hand, as other tints were brought in for warmth and a more conventional sense. “Bronze tones added in the backsplash, cabinet hardware and light fixtures balance existing furniture pieces,” Megan says. “Cabinets are not stark white but putty white. The wall color is Accessible Beige. The island base has a washed, coastal gray vibe. The Siberian oak flooring has a combination of ash tones and warm blondes. We didn’t want to go overly modern or overly traditional. Simplistic, elegant and transitional were more the key.” 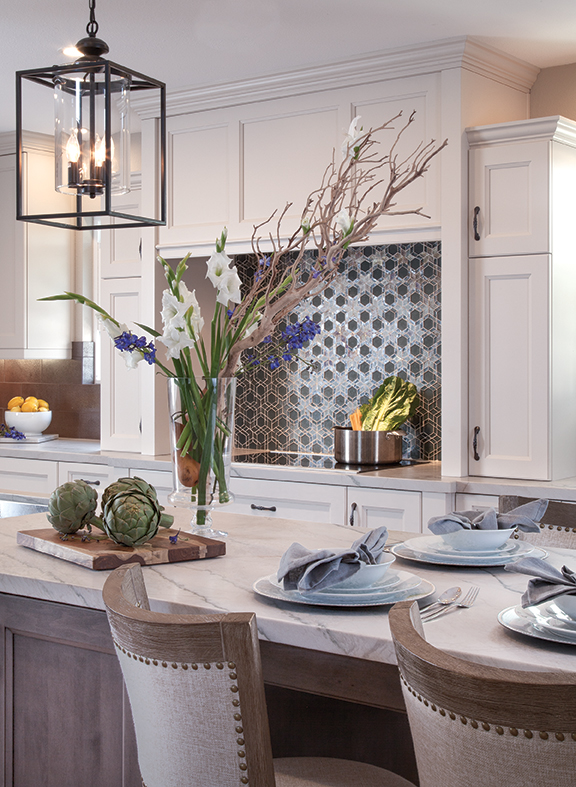 Joe voiced complaints about the earlier cook space’s lack of flow. “The kitchen was not laid out correctly,” he explains. “It was totally closed off from the rest of the house as its own little, separate room. It was narrow and long, and there was not a lot of room for people to move. When our son’s friends came over or our friends and relatives visited, it really felt cramped.”Removing a wall that separated the kitchen from the family and dining areas transformed the space into a convivial gathering spot that is highly functional — or, as Joe puts it, “Everything is right where you need it, and it’s a joy to cook in it.” “Joe and his wife, Katherine, entertain often,” Megan says. “Having a larger kitchen takes a lot of the stress away. The re-creation of their space has drastically improved their home life.”

When Janet and Terry Keating opted for full-time city life in a downtown, high-rise condo, the Wolf range was not going to get left behind. “I love to cook,” Terry says. “Before the internet came along, I had every edition for 20 years of Bon Appetit and Gourmet and built a library for them. When Cheryl Hamilton-Gray did the remodel for us in our previous Chula Vista home, I wanted the 60-inch, dual-fuel, double-oven Wolf with a 12-inch griddle and 50,000 BTUs. That happened, but I didn’t expect to have one up here in a condo. When she brought the first conceptual plan, there was the Wolf. She said, ‘This was always the center of your kitchen, so you should have it now.’ It doesn’t seem to be out of proportion.” 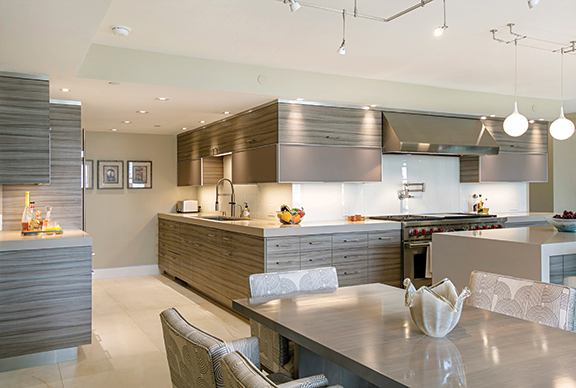 Janet and Terry left their suburban home behind after realizing they were spending less time there than at their downtown condo retreat. When an adjacent condo became available, they bought it and decided it was time for a lifestyle change. “The two condos became one, and the new condo’s design focused on providing a gourmet kitchen,” Cheryl says. “We formulated the footprint to accommodate a spacious kitchen with living, family and dining rooms open to our creative culinary center,” she continues. “On either side of this great room, we had a master suite and guest suite.” The ambitious project had its challenges. Only one separating wall could be removed be-tween the two units. Venting, plumbing and electrical wiring needed to stay intact. “Cheryl completely trans-formed the space,” Janet says. “The master bedroom in the first condo is the dining room. The living room and kitchen in the first condo are the master bedroom and closet.” “The walk-in closet became the walk-in pantry,” Terry adds. “The master bath became the kitchen in terms of the plumbing, stainless steel sink and dual dishwashers. And around the corner of the cooking area was room for a prep zone.” Since Terry does most of the cooking and Janet volunteers for washing and tidying duties, it made sense that Janet opted for ease of maintenance in materials. Caesarstone for countertops, a slab of white glass for the backsplash, a laminate finish for cabinets and porcelain flooring fit the bill. 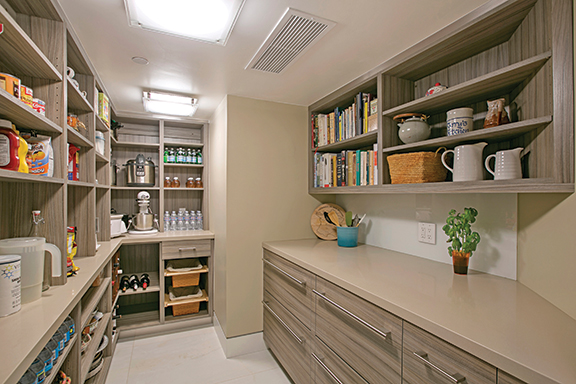 “At first, Cheryl suggested marble on the floor,” Terry says. “But when Janet told her that she’d never seen me at work in the kitchen, Cheryl quickly found an alternative that looked as good.” Stainless steel appliances hide behind cabinet panels to keep this gourmet kitchen contemporary, sleek and mini-mal — and in tune with its urban setting.“Our lifestyle revolves around the kitchen,” Janet says. “And this kitchen makes it possible for us to welcome people into an atmosphere of conviviality and sharing.” “Most people build a home and put a kitchen in it,” Terry adds. “We built a kitchen and put a home around it.”