A Pair and Their Lair

On a September day seven years ago, Bear charged ahead of Elizabeth Barrington down Kellogg Beach and nudged a stranger. Ignoring his owner as she raced toward him, the retriever lingered with the friendly fellow, who stroked his glossy black coat instead of shooing him away. Three years later, Elizabeth and Rocky Springstead married and settled into the Point Loma residence they call “Bear’s Lair” in tribute to the matchmaking pet. “I had made things OK,” Elizabeth says of her solo efforts over the years to refresh the 1940s-era residence she purchased in 1998, in part because of its proximity to San Diego Bay. “But once my husband came along, with his eye for color and design, he made miracles happen.” Early on, the couple discovered their shared passion for gardening. Elizabeth’s father tended edibles, and her mother crafted and sold floral arrangements. “If my dad didn’t grow it, we didn’t eat it,” she remembers. For 25 years, Rocky owned a company that farmed Brussels sprouts, tomatoes and other produce in Mexico for export. “Our third date was a trip to get compost,” Elizabeth says with a chuckle. Before they met, Elizabeth had cleared the garden’s “mishmash” of shrubs and trees and planted a half-dozen citrus trees, grape vines, a fig tree and a guava tree to flavor her homemade jams and jellies. Between two orange trees, she nestled a “secret garden”: a bench backed by a jasmine vine, where she retreats to read, write (she authors health textbooks) and relax amid the chatter of parrots, crows and other winged visitors. 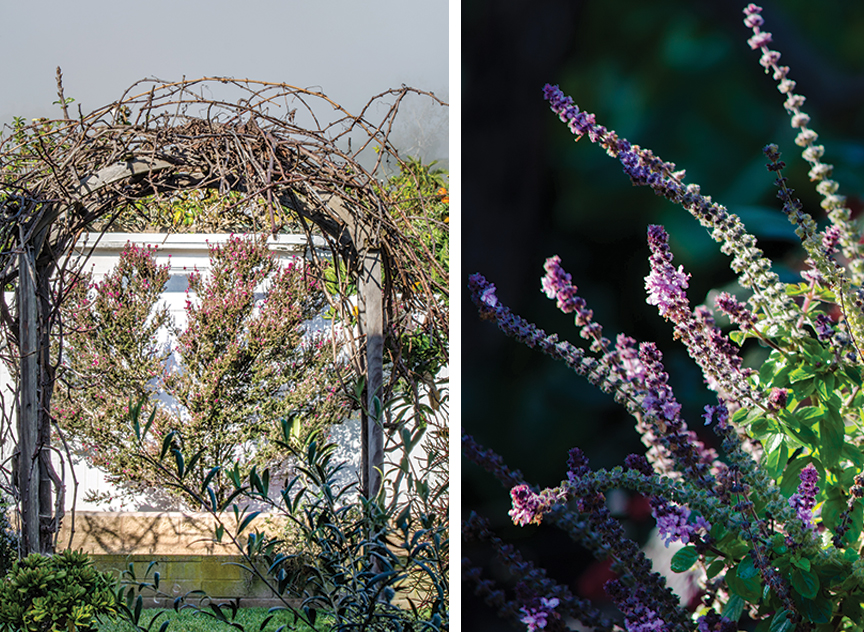 During their engagement, Rocky added a second secret garden for her, creating an intimate nook hugged by a low wall and the splayed trunk of a tall paperbark tree. He also filled a neglected side yard with a raised bed for seasonal vegetables, including fiery peppers for Elizabeth’s chutneys, sauces and curries. Between the two additions, a shaded border mixes azaleas, yesterday-today-and-tomorrow (Brunfelsia pauciflora ‘Floribunda’), ‘Gartenmeister Bonstedt’ fuchsia, South African basil and satiny white calla lilies (the favorite flower of Elizabeth’s mother). Rocky added boulders he found in a remodeler’s discard pile.
“Pay for rocks!” Elizabeth exclaims. “My father would roll over in his grave at the thought.” 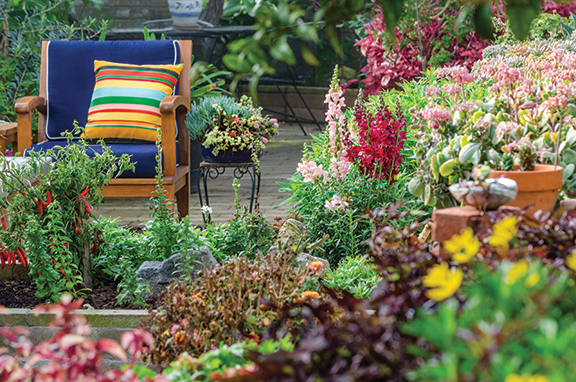 The couple also extended the rear patio to add more outdoor living space. Teak seating with nautical blue cushions, (a nod to Rocky’s love of sailing) ring a new gas fire pit. Steps away, a teak dining table seats 10 for alfresco parties that draw décor, hostess gifts and menus from the garden. Terraced planters at the patio’s edge showcase bouquet makers such as alstroemerias, as well as Rocky’s growing collection of agaves, hens and chicks (Sempervivum tectorum) and other succulents. More succulents — including trailing fishhooks and donkey tail sedums — join creeping Charlie, spider plants and other shade lovers in a wall garden gradually cloaking a side-yard fence. In late 2014, Elizabeth and Rocky, with Bear and their miniature pincher, Chula, moved out for six months while Murfey Construction remodeled the home according to Rocky’s design for an airy floor plan, sleek modernist exterior, and French and LaCantina doors that open to the landscape. “We wanted to be in the garden even when we were inside our home,” Elizabeth says. “And we wanted everything to flow when we entertain. We were thrilled to see what we envisioned come to life.” At the same time, a front-yard makeover created a drama-tic new entry and garden. A new gate, perimeter wall and cedar lattice add privacy, while allowing the dogs to peak through the slats. 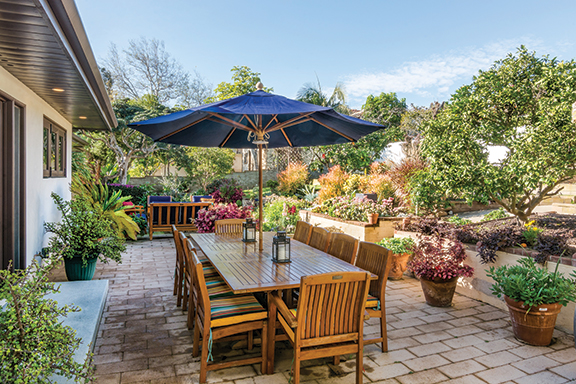 Wide concrete pavers and sweeping stairs climb to the front porch, now expanded across the front of the home. Numerous walks around the neighborhood and consultations with landscape professionals helped Elizabeth and Rocky pick a vibrant plant palette. Painted bamboo and gleaming ‘Silver Sheen’ pittosporum form lacy screens that flutter in the sea breeze. Two ‘Afterdark’ peppermint willows skirted with jasmine stand below lush, porch-level beds of Hawaiian snow bush, ‘Tequila Sunrise’ mirror plant and rosy pink iresine, one of the garden’s workhorses. Beneath a towering podocarpus, a fountain entertains with water music. On-time completion for both projects was a godsend, Elizabeth says. The family moved back home, allowing Bear to enjoy his final days with the couple he brought together in a favorite spot: the sunny porch where “Bear’s Lair” is stamped in the concrete. “We’ll be forever grateful for that,” Elizabeth says. 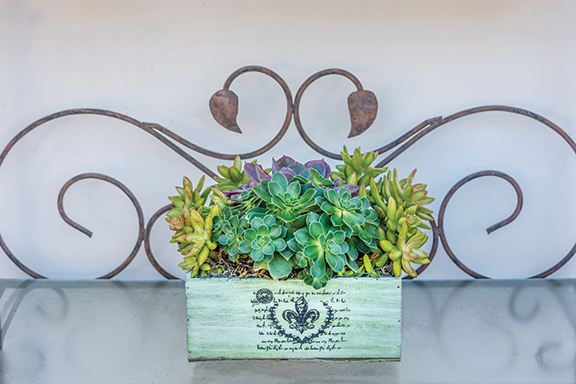