Real estate agent Susan Botticelli and her fiancé, contractor Monte Mattson, went into their own home-building process knowing that one piece would be central to the design: a 200-pound orthoceras fossil. The black hunk of extinct mollusk dates back millions of years. The couple found it in a Morro Bay geode shop early in their relationship. “This speaks to our love of the water and islands. We thought we would buy the piece and construct a house around it,” Susan says. “It kind of reminds us of why we’re here and how this house came together.” Wanting to meld their household and tastes, Susan and Monte sought to transform the La Jolla home she owned into a place that would represent their shared affection for beaches, entertaining and real estate. Architect Scot Frontis redrew the lines of the 1960s-era residence to take it from traditional to modern. He erased walls from the layout, scored horizontal striations into the finishes and crafted a three-tier roofline. 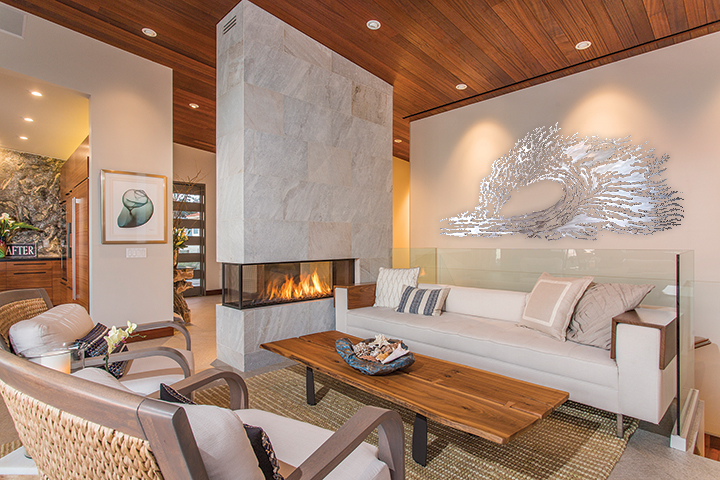 “We wanted some complexity in the roof, not just a plain old roof,” Scot says. “We landed on simple forms, yet they define the interior spaces.” Scot and Monte kept the home’s roof height and basic footprint on its quarter-acre lot, as required by neighborhood guidelines. Yet by moving a garage downstairs, they increased the livable square footage from 1,600 to 2,650. “We did not limit ourselves to what that box was when we started,” Monte says. “We’d like to believe we were more creative than that.” They mounted the orthoceras beneath a skylight at the end of the home’s central hallway, just outside the master bedroom. From here the wood ceiling gradually climbs from about 9 feet to 13 feet, peaking above clerestory windows and glass pocket doors that corner the living/dining area and expand on views of the Bird Rock coastline. 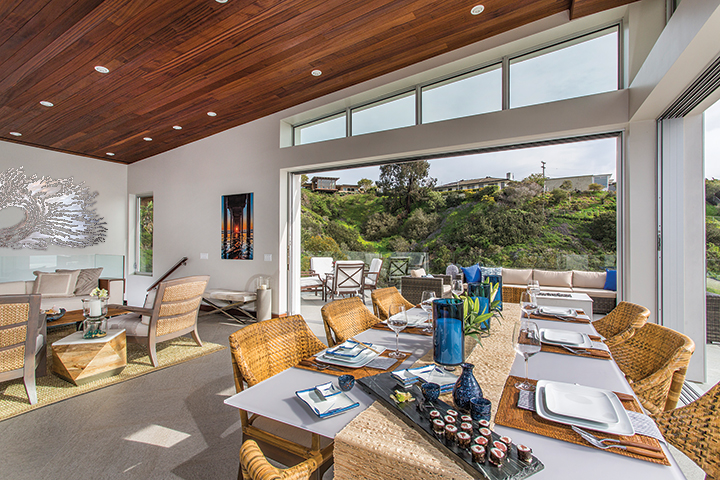 The indoor/outdoor space is ideal for entertaining, especially with both the double-sided fireplace in the entry/living room and the patio fire pit aflame. The sound of ocean waves crashing and birds singing in the canyon edging the property add to the ambiance. Finishes in the home reflect the couple’s desire for design compromise. Susan’s previous homes were more traditional, so she wanted wood that would convey warmth. Monte prefers a modern aesthetic, so they kept materials and colors consistent throughout. Scot used sapele for ceilings, teak for flooring in the master suite and porcelain tiles in the main living areas. 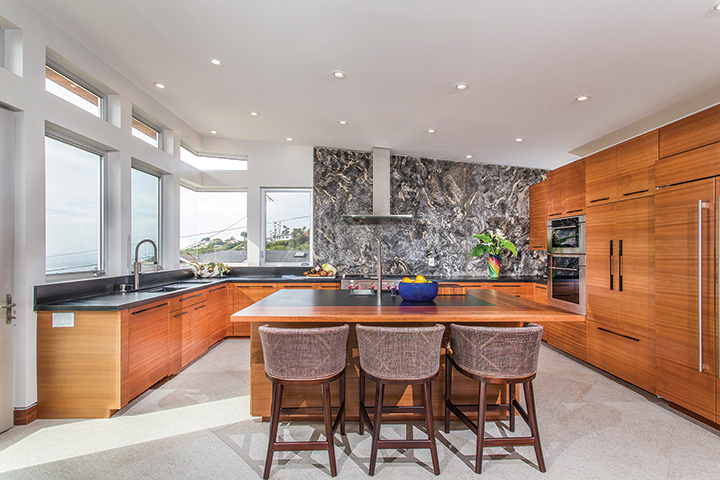 “We were trying to build a house with a lot of natural finishes, something that was sort of modern with a hint of Hawaiian,” she says. Signature stonework includes a schist called Cosmos. The metamorphic rock with shiny flecks of mica lines the back wall of the kitchen and the master bathroom shower. Countertops and bathroom vanities complement the drama in flamed-finish, black granite. Stripes in mahogany veneer cabinetry pick up the horizontal lines Scot used throughout the home. Parallel lines also appear in the privacy glass insets of the entry door and interior doors; in the texture of the master bedroom’s grasscloth wallcovering; along the aluminum, Schluter-edged base-boards; and in the illuminated teak steps of a central, glass-sided stairway. The home’s striking angles are evident, too, in its landscape design. A poured-in-place concrete walkway steps up the sloped property. Water flows from a house-side fountain through channels in the concrete and spills down the walkway’s street side. Succulents, birds of paradise and plumeria surrounded by black lava rock play into the couple’s modern-tropical theme. Decorating the new home has been a gradual process. Susan and Monte selected furniture with woven textures, lightly finished wood and organic shapes such as that of the entryway table made from the root of a massive teak tree. The most recent purchase was a stainless steel wall sculpture of ocean waves by an artist they met in Cabo San Lucas. 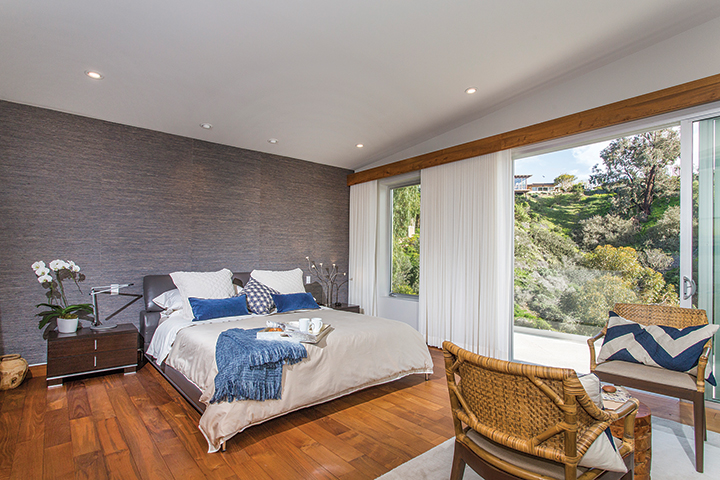 “It’s a lot of fun to find pieces that you really like and that fit. You find something really fantastic and maybe it’s on the edge of the concept you had in mind,” Monte says. “It’s funny how piece by piece everything comes together,” Susan adds.Susan pushed for spaces that could adapt for any homeowner. A downstairs room that opens to a covered deck is outfitted as her office, but could serve as a guest bedroom. “I was focused on building a home that would be a good value for resale because I’m in real estate,” she says. “I didn’t want a space that was just focused on us.” Nevertheless, the home incorporates their individual needs. 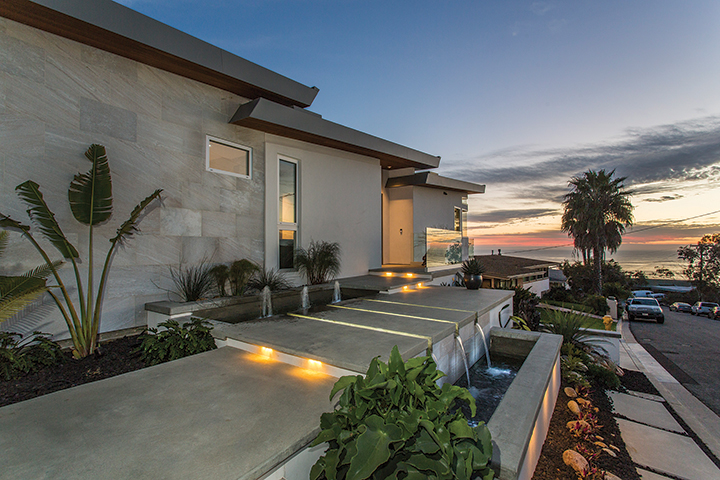 “I’m a big guy. Space means a lot to me,” Monte says. “One of the things we talked about endlessly was, ‘How do we get volume with a limited footprint? How do we make it feel big?’” Scot responded with an architectural design that includes wider hallways and lofty ceilings to give the illusion of a larger space. Scot and Monte previously collaborated on Monte’s Mount Helix home, a 2012 San Diego Home/Garden Lifestyles Home of the Year. Scot points out that the La Jolla and Mount Helix homes are similar in their modern lines, hillside sites and picturesque panoramas. “As with this home, the big thing with the other house was the roof and how it opens out to the view,” he says. The thrill of building the La Jolla home has emboldened Susan to consider tackling another project. Maybe their next home will be on a single level with Spanish modern or Bohemian style, she suggests. Monte laughs as he postulates on the unlikely nature of that happening: “Once the sunset starts and after about two sips of wine and the fireplace going, she says, ‘You’re never going to pry me out of here.’”