Riding waves here decades ago, John Arendsen fell in love with sleepy North County — a vivid contrast with Newport Beach where he and his wife, Janis, were raising their young family. “I didn’t want my kids to grow up in such a congested area,” the real estate broker says. “So we started looking to move.” When a newspaper ad described just the oceanview California ranch they were seeking, the young couple drove south to a town they’d never heard of: Vista. “We put an offer in that day,” John says. Today the residence and one-acre grounds at Casa de Aire y Sol bear little resemblance to the boxy house and weedy lawn that greeted the family 35 years ago. A peaked metal roof tops the five-bedroom, three-bath home wrapped with a wide view deck and spacious patios of Saltillo tile. A mature privacy hedge of ficus, privet and honeysuckle encloses the back yard while preserving Pacific Ocean vistas. Tall palms, fragrant plumerias and other tropicals — many planted by John from one-gallon pots — add the lush, resort-style ambiance John and Janis loved on trips to Hawaii, Cabo San Lucas and Palm Desert. 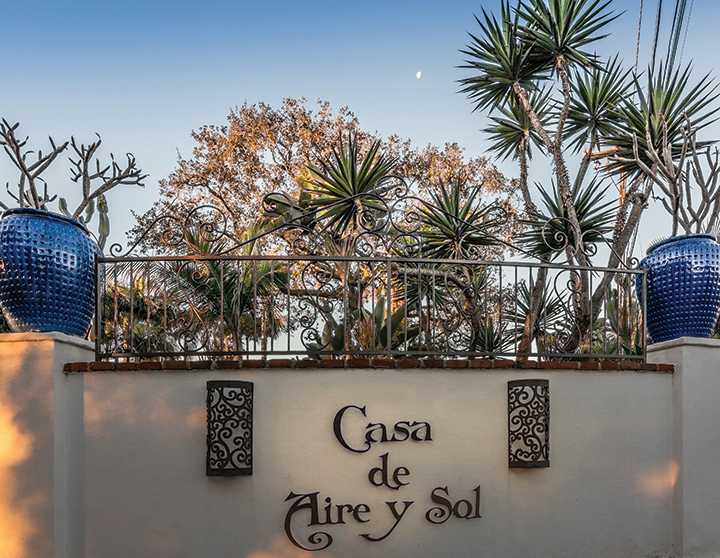 The romantic setting inspired 11 couples, including all five Arendsen children, to marry here over the past two decades. A passion vine-covered arbor in the back yard is the setting for vows, followed by dinner and dancing under the stars. “We’re so honored,” John says of celebrations that include an annual Easter egg hunt for the couple’s 14 grandchildren. As their children were growing up, much of the landscape was a dedicated playground, with a volleyball court, batting cage and two-story tree house. Today, only two wooden swings hanging in a strawberry tree and a backyard hammock recall those years. Now empty nesters, John and Janis recently turned to North County landscape designer Susanna Pagan of SP Gardens to revamp the front yard with its thirsty turf and confusing path to the front door. “My nemeses were there: two planting beds that were eyesores I just couldn’t fix,” John says. 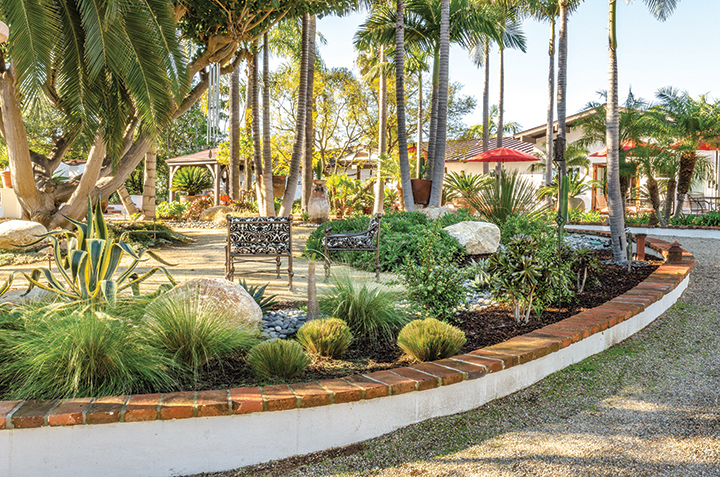 With another wedding in the wings, Susanna shaped new water-wise garden rooms and  revised existing beds, echoing the curved gravel driveway and white stucco perimeter walls and curbs. An eclectic mix of containers, mature plants, garden accents and sentimental keepsakes that John and Janis accumulated remained, linking old with new. “It was great having so much already there to work with,” says Susanna, who helped the couple obtain a lawn-removal rebate to cover some of the costs. The largest garden room typifies the deft blend. At its center resides a coral tree, once surrounded by a boxwood hedge and lawn. Now its trunk is circled with low-growing succulents and small boulders that in turn are ringed by a new, decomposed-granite path that originates off the driveway. An added seating area captures views across the final circle, a planting bed that combines sculptural aloes, agaves, aeoniums and echeverias with breeze-catching sages, ornamental grasses and calandrinia. More movement flows through the bed from eddy-like patterns of gray beach pebbles — some from bucketfuls gathered by John when he surfs. The gentle music of wind chimes collected over the years plays here and throughout the garden. 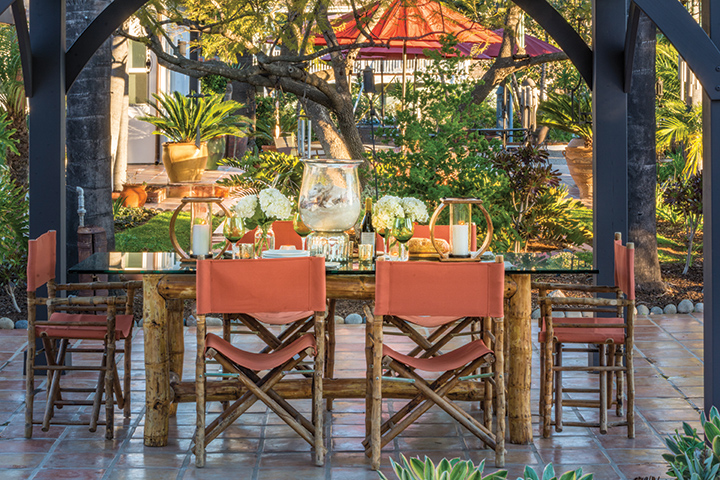 “I swear that, sometimes when I work out here, I hear a melody,” John says. Pairs of containers help to define a new walkway from the driveway to the front door. Steps away are spacious dining areas — one with five umbrella-shaded tables and a second sheltered by a new, metal-roofed gazebo. Between them is another planting bed anchored by a mounted 19th century metal bell collected by Janis’ father. 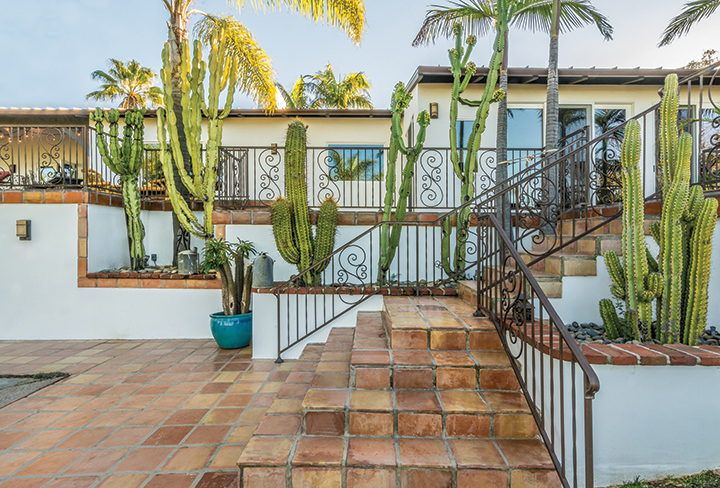 Susanna also tamed John’s nemesis beds. One that abuts the next-door neighbor’s lot now is guarded by two ‘Hercules’ aloes and divided by a path that passes a table and benches on the way to the wooden swings. Tall palms throw dappled shade across rivers of beach pebbles, senecio and calandrinia that puddle around aeoniums and other colorful succulents. Around the driveway entrance, where blue urns marked a prominent semicircle, Susanna pared down hodgepodge plantings to blend palms, plumeria and giant birds of paradise with barrel cacti, ‘Blue Glow’ agaves and other succulents. A border of beach pebbles “flows like water along the edge, making it a very tranquil spot,” she says.Nestled nearby is an orange-cushioned chaise backed by glowing ‘Sticks on Fire’ euphorbias. “It’s quirky, but that’s this garden,” John says of the unexpected seating. “Not a day goes by that we aren’t out here, happy that finally it has all come together.” 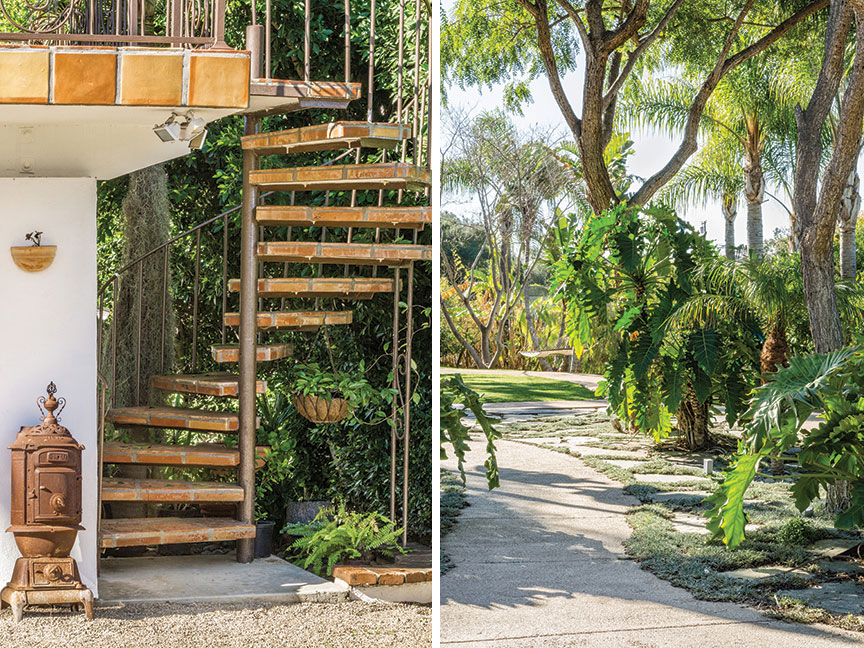