A Feather in Their Cap

A vivid Día de los Muertos palette fills Robert and Nancy Levine’s dining room in artwork that adorns burnt orange walls. A close look at the framed depictions of brightly colored fowl, done in a style known as Mexican birds of paradise, reveals that they are made with feathers. Nancy compiled the collection over 20 years, culling eBay for vintage pieces from the 1940s. This strength of dedication, shared by her husband, Robert, served as an asset when they decided to undertake the restoration of their 1928 Spanish Eclectic home and apply for historic designation of the George and Kathagene McCormack House. They purchased the fixer-upper, across from Balboa Park Golf Course, in November of 2011. “The house was a wreck,” Robert says. “It had essentially gone 60 years with very minimal maintenance. There were extensive plumbing issues, and someone had applied spray paint to all the walls.” With an interior design team in place (Nancy’s sister, Janet, and her husband, Michael, who make up the L.A.-based Walusko Lange Inc. design firm), Nancy and Robert interviewed a number of local architects before choosing Tony Garcia of Asquared Studios. In June of 2013, after jumping through many technical hoops, the couple gained historic designation for their home. The following January, the restoration project began.

Nancy and Robert oversaw the work remotely, as they were living in New Jersey and, later, Las Vegas, during the process. Tony and their project manager, Dave Duncan of Tony Parker General Builders, updated them on progress between their visits, which occurred approximately every two to three weeks. They added 270 square feet to the house, primarily in the form of an enlarged kitchen, and replaced the garage (deemed to fall outside the historic designation bounds) with a structure that houses Robert’s office on the second level. “There was a very diligent effort to maintain the feel of the house — to keep its original bones in order to maintain its historic integrity,” Tony says. “Eighty percent of the tilework in the house was handmade in the same process that it would have been in the ’20s,” Robert notes. “The roof tiles are made by Gladding, McBean, which has been operating since 1875.” “Every material used in the house existed in the 1920s, with the exception of one bathroom countertop,” Janet says. “All the tiling done in the bathrooms is in period-correct shapes, but with an updated color palette. Some of the glazes that were used then we were only able to utilize in small portions due to current EPA regulations.” 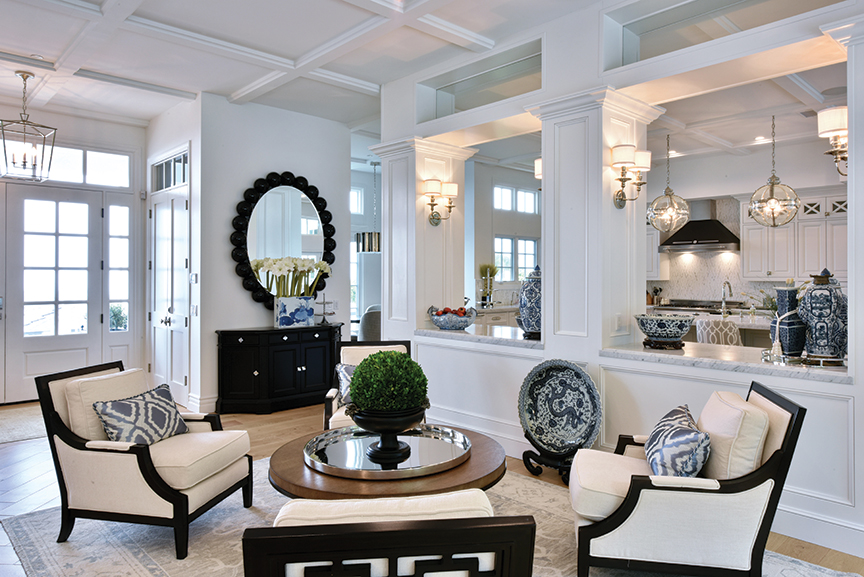 At the inception of the remodel, the workload was divided between two teams, with Robert and Tony focusing on external and structural designs and Nancy partnering with Janet and Michael on interior aspects.
“Nancy and Robert were clients with very specific tastes and needs,” Janet says. “Much of the interior was designed around showcasing her collections — planning everything so that they were exhibited without giving off a jumbled air.” The couple’s love of natural light inspired the dining room’s design. Before the remodel, the space was dark, with a low ceiling and grimy hardwood flooring riddled with wood rot. Tony heightened the space, added a skylight and stitched in thin-strip oak flooring, preserving the concave baseboards. Hanging from the raised ceiling is a Moroccan lamp — an ode to Nancy’s love of the North African country’s décor, equal to Robert’s preference for the architectural style of India garnered on his many trips there for work. Heirloom dishware, from both Nancy and Robert’s mothers and grandmothers, fills a china cabinet. “We felt very strongly about personalizing each space in our home with pieces that really mean something to us,” Nancy says. While the dining room houses her avian art, the adjacent living room’s butterscotch walls form a backdrop for images of Torrey pines inspired by her youth in La Jolla. 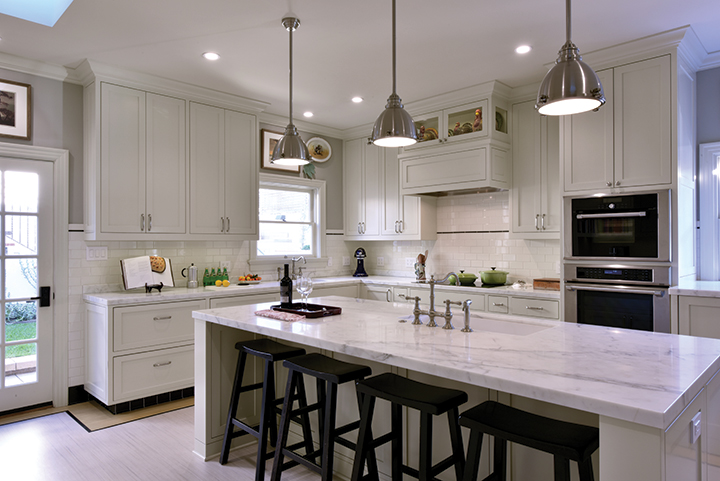 “I have very fond memories of the hikes that my Girl Scout troop used to take at Torrey Pines State Reserve,” Nancy says. Restoration in this room focused on the antique fireplace and stained-glass windows flanking it. “A local history enthusiast told us that the window on the left depicts Point Loma’s peninsula in the distance with Balboa Park’s lily pond in the foreground and the one on the right shows Mount Helix,” Nancy says. The dirty and cracked façade of the fireplace, along with its inner workings, had to be restored in order to show off its intricate Claycraft tiles. Era specific, the tiles illustrate various nature motifs in soft, neutral browns and greens. Living room furnishings include a Moroccan floor lamp, wood-framed chairs and three pieces that Janet had custom made: two contemporary chairs, upholstered in vintage Scalamandre fabric, and a sofa.
The bathroom across the hall features tilework designed by Michael and a color scheme of white, pale blue and deep orange drawn from the two Pamela Neely paintings of Tuscany on the wall. A basket woven by Nancy and Robert’s daughter and a quartet of faces painted by Janet continue the leitmotif of personal touches. Down the hall and up a staircase lies Nancy’s office, the only room on this level. Her grandfather built the desk and chest that adorn the room. Downstairs, the spear-shaped design of a black Tunisian Palm tile inspired the master bathroom’s look. The shape is reminiscent of tilework on Akbar’s tomb in Sikandra, Robert’s favorite building in India. A framed image of the structure hangs on the wall. Creamy white, black and soft green ceramic tiles run throughout the room. “You can tell that these tiles are hand glazed, as the process creates a slight but beautiful color variation,” Janet says. In a home filled with color, the kitchen stands out as an oasis in white — from its pristine subway tile-covered backsplashes to the marble countertops, though there is a distinctive black toe kick. “My only surprise when I saw the house at the end [of the renovation] were those toe kicks that Michael had thrown in,” Robert says. “I really like the contrast.” Additionally, Michael specially designed the Marmoleum flooring for Nancy, who is a huge fan of the material. Overall, the room is spacious and airy, with high ceilings. 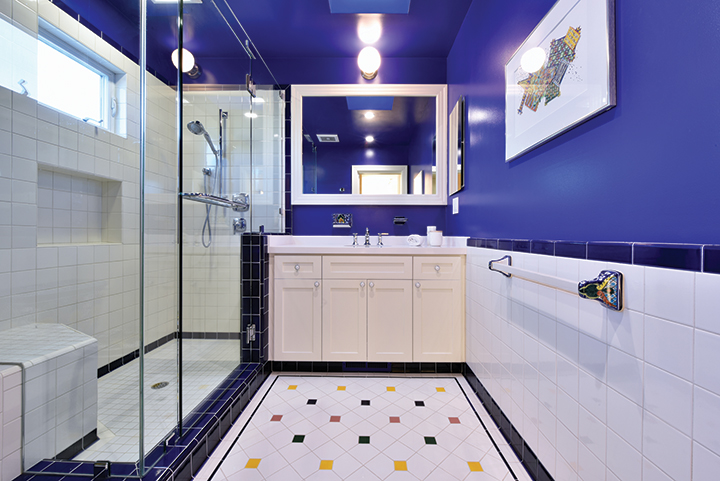 “We wanted the kitchen to be large, because it’s the gathering place of the home and because Nancy loves cooking,” Robert says. “I have my own workspace and don’t get in her way when we’re cooking for holidays.” The subject of the unusually deep cabinet in the corner provokes rueful looks and chuckles. This clever setup houses a washer and dryer. “Robert didn’t want them in the garage or in the sunroom, so we had a hard time figuring out where to put them until we saw a similar format in another home,” Janet says.The rear kitchen door opens to a vibrant, tiled fountain designed by Michael. The area surrounding it forms one of three distinct outdoor spaces that also include a drought-resistant garden along the side of the home, designed by Nancy, who is a master gardener, and a patio below the upper deck of Robert’s office. On the latter, a dining arrangement, data ports, outdoor heaters, and fans mounted to exposed Douglas fir ceiling beams make the space comfortable and user friendly. Stairs with pattern-tile risers lead up the side of the new structure. “The slight running of the colors gives away that these tiles were glass-kiln glazed, as they would have been originally,” Janet notes. The artful steps lead to Robert’s office, which also serves as a guesthouse when visitors arrive, approximately once a month (some come from as far away as India). An upper deck looks down on Nancy’s garden and the main house. 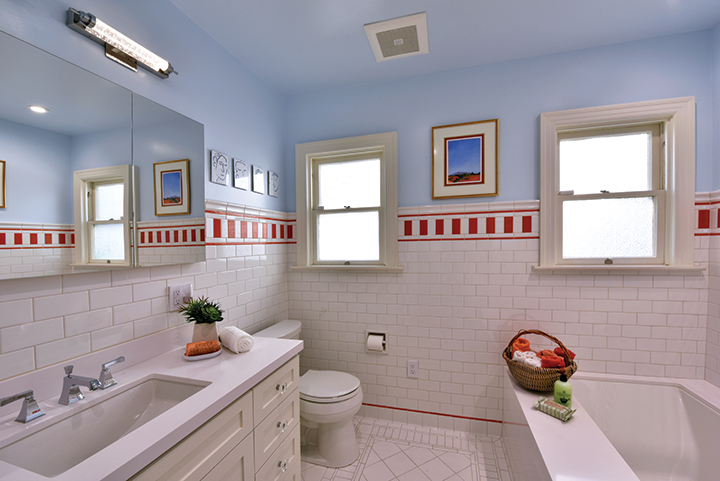 Tony explains that the view from here showcases that the main home’s parapets are at different levels. To achieve historic designation, “you must be able to clearly discern the difference between the original structure and any additions,” he says. In keeping with the spirit of preservation, the door from the original kitchen now serves as the addition’s bathroom door. When entering the room, the rich cobalt of walls and ceiling make a bold statement. The eye-catching Talavera toilet (with matching sink, soap dish and towel bar) inspired the paint selection. Outside the bathroom, a counter displays a plaque from the Historic Resources Board declaring Robert and Nancy to be winners of the 2015 Architectural Rehabilitation Award. Tony was honored with this same accolade, as was contractor Tony Parker. This recognition rewards all parties’ attention to details.