Married 49 years, an Oceanside couple shares the joy of work and music in their garden

This month, on their 49th wedding anniversary, John and Cheryl Arenas likely will start the celebration in the jewel-box garden of their Oceanside home. Among mementos there marking earlier anniversaries is a heart-shaped birdbath with the telling inscription “My heart is in the garden.” “We’re happiest in the back yard, working and listening to music,” Cheryl says. “We’re both creative people, and gardening is like painting a picture. It’s very therapeutic to be in nature and ‘away from the world.’” The couple bought their ranch home in the early 1980s, opting for North County sea breezes and open space over
Los Angeles smog and congestion. As they raised their family (two daughters and a son), Cheryl worked as a hair stylist and John developed a custom wallcovering business that decorated mansions for Magic Johnson, Ray Kroc, Betty White and other celebrities around the Southland. “I used to ask him, ‘Don’t you feel bad coming home to our small house?’” Cheryl recalls. “I’d tell her, ‘No,’” John says. “I loved it here, with the kids and dog. We even raised chickens. There were no houses around us then. We can hear the Mission [San Luis Rey] bells ring, and the coast is just a few miles away.” 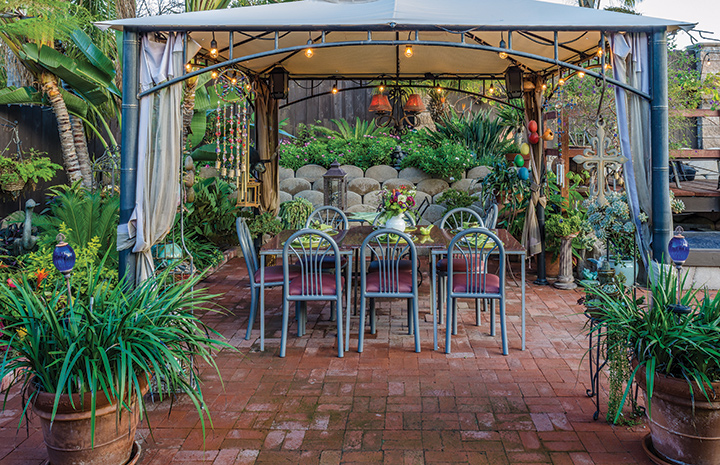 Early on, as neighborhoods grew around them, John secluded the back yard behind a wood fence and added a patio and airy gazebo for outdoor dining and entertaining. The red-brick hardscape reflected his family’s link to Mexican migrants who toiled at Simons Brickyard in Los Angeles in the early 20th century. “I’d bring back bricks when I had jobs in L.A.,” John says. “Today, they’re hard to get. You can only find them used.” Initially composed of lawn and one tree, the landscaping evolved over the decades with an emphasis on tropicals — “what you’d see in Hawaii,” Cheryl says. “But the garden was like a chameleon, changing with the seasons and over time,” she continues. “Not everything survived, and water became more and more of an issue. Eventually, we decided it was time to simplify.” Today, the water-wasting, sloped front lawn is gone, replaced by a broad entry terrace outlined with a low, curved wall and accented with a dry stream and boulder-strewn beds — all designed by John. When bids for the project soared, he tackled the construction too, toiling four months to set tons of pavers and cobbles while working around towering king palms and moving two sizable pygmy date palms. The backbreaking labor marked his recovery from a serious viral infection three years earlier that confined him to bed, unable to walk. 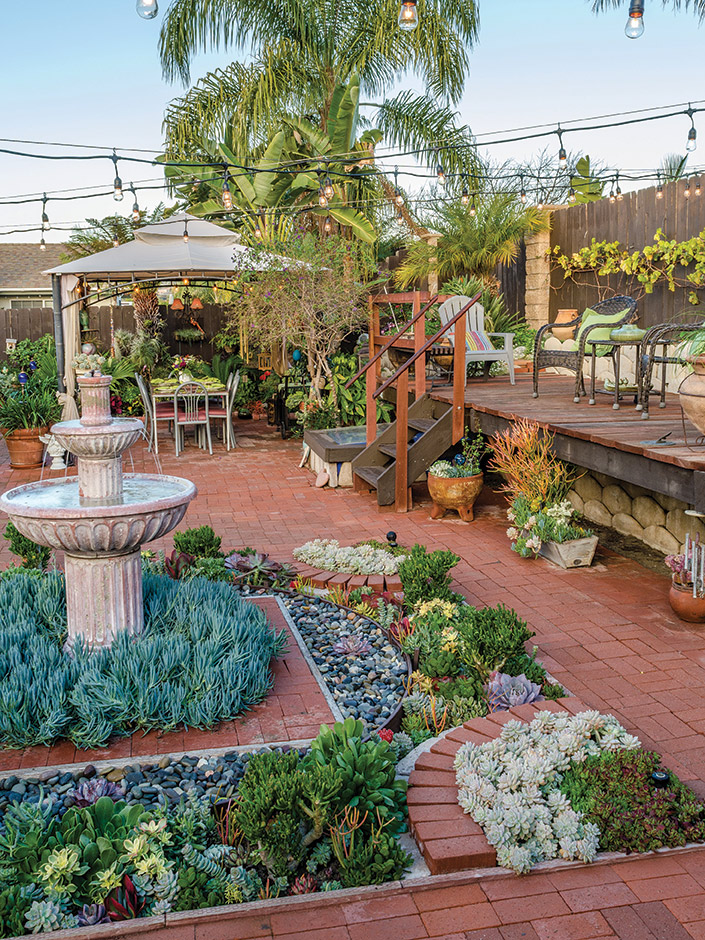 “Today he’s stronger than most 20-year-olds,” Cheryl says. Sego palms, birds of paradise and foxtail ferns nestle against the house — a contrast to the glowing succulents that over-flow decorative urns, skirt the king palm planter and dot cobble-filled beds next to the sidewalk. “I never thought we’d sit out here, but we do now,” Cheryl says, pointing to a table and chairs outside the front door. “And when we get ready for guests, all we have to do is sweep.” In the back yard, the last lawn remnant disappeared when the brick patio was expanded to abut lush perimeter beds along the house and fence. “It’s a jungle back here,” Cheryl says of the eclectic plant palette that spans from African daisies to wisteria. A raised deck backed by a gnarled grape vine offers a bird’s-eye view of the garden’s centerpiece: a tiered fountain set in a geo-metric bed. Blue chalk fingers pool around the fountain base, while low-growing succulents and river rock form kaleidoscopic patterns in orange, gold and gray hues. 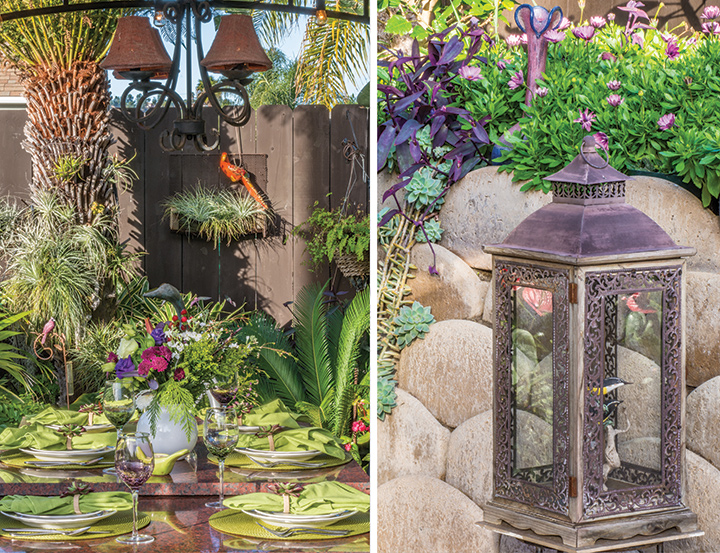 Steps away, a shade garden next to the house glows with pink hydrangeas, ivory calla lilies, white cyclamen and the blossoms of yesterday, today and tomorrow that age from purple to lavender and white. Above, a variegated vine suspended from the gutters loops like a garland. Cheryl’s favorite bed holds prized tropicals, including bromeliads, peace lilies, coleus, ferns and begonias. Spidery tillandsias clinging to the trunk of a Tasmanian tree fern add bursts of color when their purple bloom spikes emerge. Peering out of the foliage is one of the landscape’s many bird sculptures. “I like surprises when you look around the garden,” Cheryl says of her “aviary” that includes a ceramic baby blue bird that belonged to her mother. Last summer, when Cheryl retired, she and John hosted a party that overflowed the updated front and back yards. New strings of globe patio lights and music piped through outdoor speakers kept the festivities lively well into the evening. “We have so much in our small garden, “John says, “and we still have room to dance.” 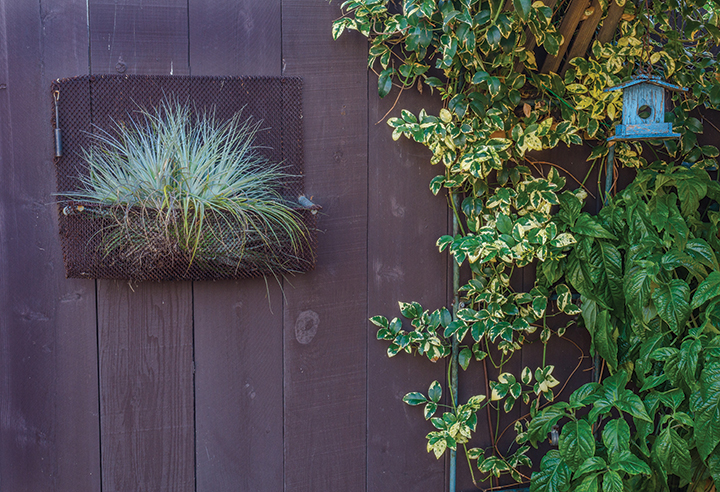