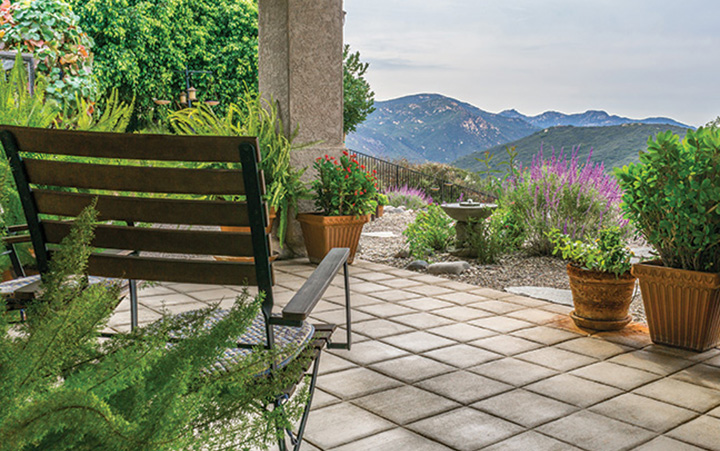 John and Deanna Weeks share knowing glances when first-time visitors react to the soaring mountain vistas outside their home. “People stop and say ‘Wow’ — and that’s just what we did,” John says, recalling the couple’s impromptu decision 13 years ago to check out a house under construction in an Alpine gated community. “We looked at the view, and then each other, and said, ‘We’ll take it.’” Though it took a while, the property hugged by Cleveland National Forest wilderness now has a fitting complement: a flowery wildlife habitat garden whirring with butterflies, birds and bees. The three-year-old landscape entertains friends and family who gather year-round for reunions, celebrations, meetings and more. A get-together of the San Diego County Garden Guild is typical. “There were butterflies everywhere. It was like a Disney movie,” Deanna says with delight. “That’s by design. Our garden was made for them.” The all-organic, certified habitat abounds with host and nectar plants for butterflies, sheltering trees for birds, and feeders and fountains that nourish all. Even noshing rabbits are tolerated. 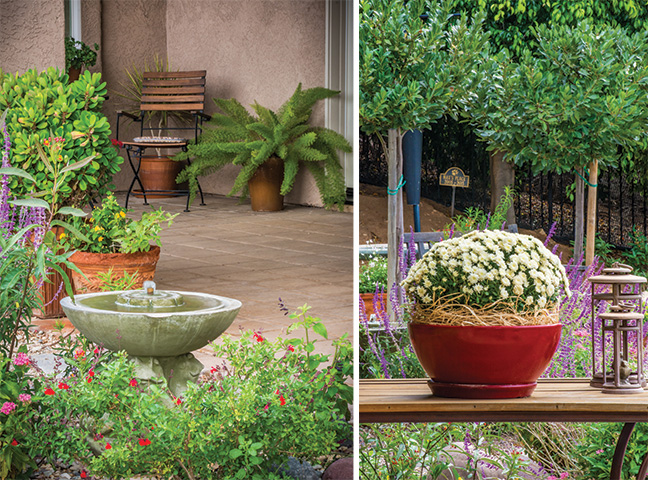 “If the bunnies eat something, we just don’t plant it again,” John says. Helix High School sweethearts married for 52 years, the couple loved Alpine’s small-town vibe, but held off moving there until their three children were grown. Developing a garden around their new Mediterranean-style home didn’t begin in earnest until after John, a geography professor at San Diego State University, and Deanna, a non-profit executive, retired. “We called it Fallow Acres,” says Deanna, of the former landscape’s bland carpet of lawn. While enjoying their outdoor kitchen, dining room and vanishing-edge pool, they explored planting a vineyard. “Too much work,” John says of the discarded plan. Instead they began an orchard, adding a new fruit tree as each of their seven grandkids was born. About four years ago, the desire for lower water bills and improved access around the 2-acre lot inspired Deanna’s first foray into gardening. 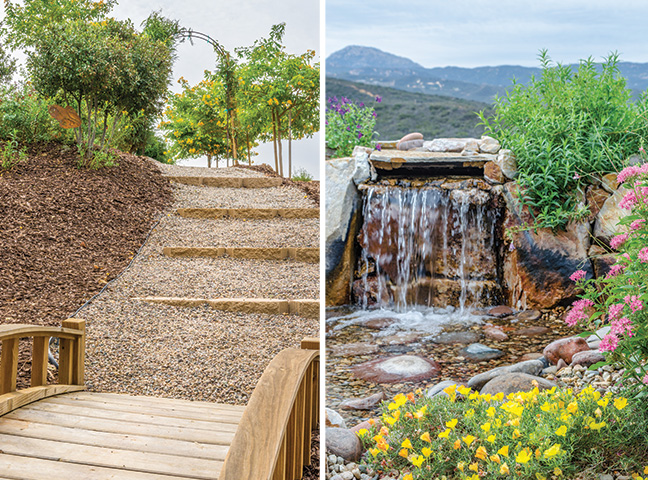 “I put myself in good hands,” she says, seeking guidance from her best friend, Lani Freymiller, creator of a lauded Rancho Santa Fe garden, and Lisa Lomax, former president of an Alpine garden wildlife club. “Among their tips was to pick bulletproof plants for the garden’s bones, which I did,” Deanna says. Those many design lessons informed the landscape, starting with the entry garden between the circular driveway and front door. There, low privet hedges and ‘Gros Bleu’ French lavender ring olive trees, a stately magnolia and lacy jacaranda. Potted ferns and a fountain decorate the front porch where Deanna often stages seasonal displays. Lavender and privet also circle ‘Iceberg’ roses outside Deanna’s workroom, where a curved patio, dubbed “the piazza,” captures sunset views and overlooks their German shepherd’s grassy playground. Winged visitors flock here to sip from the tiered fountain and the dozen ‘Mesa Purple’ autumn sages in Italian-style pots. 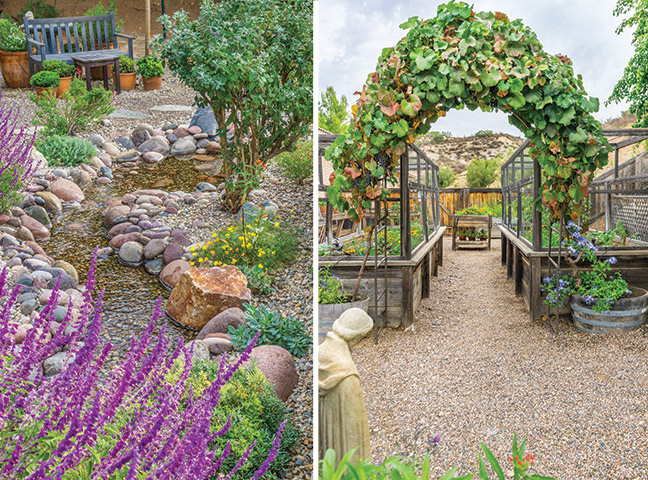 Along the rear patio that stretches from the pool past the master suite, more sages — many in Deanna’s favorite violets and blues — mingle with star clusters, penstemons, gauras, milkweeds and other butterfly and hummingbird favorites. Birds often stop to bathe in the cobble-lined waterfall and stream, watched over by a statue of animal patron St. Francis. “We had to have that here,” Deanna says. Steps away lies the entrance to an edibles garden, announced with a vine-covered arbor where grapes are left hanging for bird treats. Inside, seasonal crops, herbs and edible flowers grown in protective raised beds are harvested for the couple’s vegetarian meals. An Arizona quartzite stairway, flanked with ribbons of rosemary, drops down to the orchard and a wisteria-fringed pergola, where Deanna and John like to linger with glasses of wine. Viewed from here, up-pruned ‘Concha’ wild lilacs flare like windswept skirts across the gentle slope. 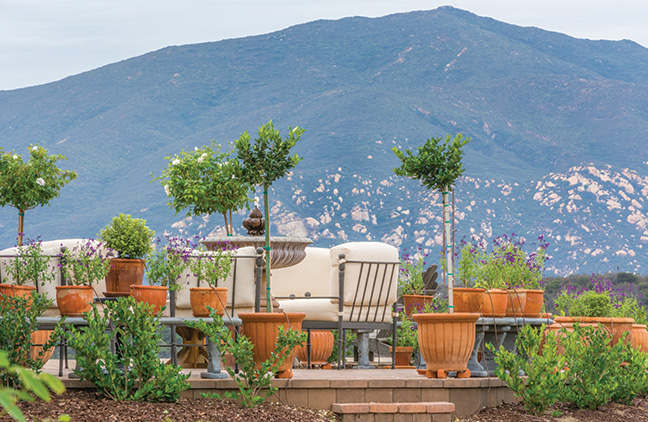 A gravel path past some two dozen fruit and nut trees leads to Deanna’s allée of six golden wonder senna trees, host plant for yellow cloudless sulfur butterflies. “On a spring day, there will be clouds of them here,” she says. In the distance, two passion vines sprawling across a fence welcome caterpillars of bright orange gulf fritillary butterflies. In this corner of the property, a cutting garden is planned, heralded by two ‘Golden Celebration’ roses planted when the couple marked their 50th wedding anniversary. A nearby bench — a destination on John’s dog-walk route — faces a stand of Aleppo pines that house nesting birds.
Occasional gardeners for many years, Deanna and John now relish the habitat garden’s bounty daily. “It’s our peaceable kingdom,” she says.