By any measure, making a functional and beautiful getaway out of 285 square feet is a big deal 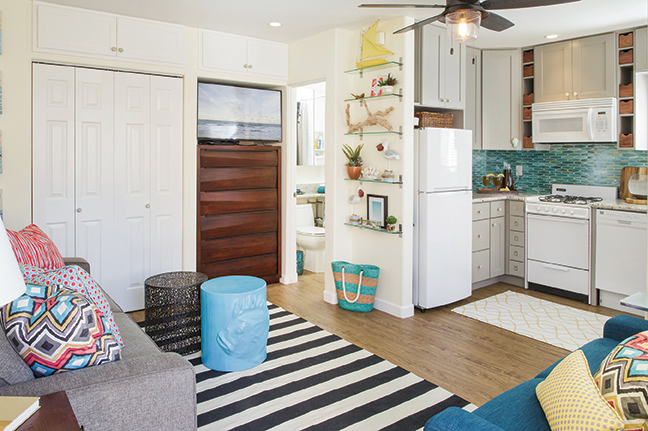 When Barry and Evelyn bought a Mission Beach four-plex 50 feet from the ocean, their plan was to “someday” rebuild the property into “a place our family could enjoy in the future,” Barry says. But, with a lot of other things going on in their lives, doing so was “not a top-of-the-list project,” Evelyn adds. Nevertheless, after more than a handful of years of easily renting the four units, the couple decided to make use of one of the studios for their personal beach get-away. They turned to designer Danielle Perkins, who had remodeled their El Cajon house, as well as houses for their parents and their son. “She did a great job on what we had envisioned for our home, working within our budget and time frame. She always swung hard and knocked it out of the park no matter what changes we came up with,” Evelyn says. Noting that he is in the construction business, Barry says, “I have a good sense for space — color and design not so much. During the process [on the studio], we came to a point where we realized we were trying to stuff things into it that were too much to be functional. Once we eliminated them, it went really well.” “We wanted to have a place to store bicycles so that we could bike down the boardwalk,” Evelyn offers by way of example. “Needing a kitchen and a place to sleep, it was not going to work.” “My wife and Danielle ixnayed hanging bicycles from the ceiling or hanging them from the walls,” Barry adds with a chuckle. They do, however, have room for boogie boards and beach chairs in cabinets above a closet that holds clothes, towels and a beach umbrella, as well as folding tables and chairs. 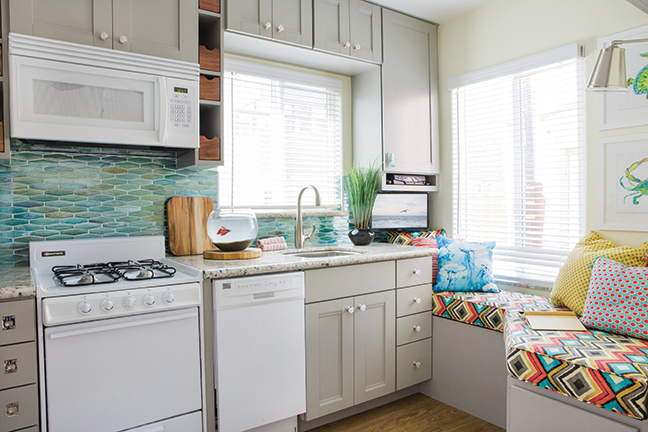 “We separated the closet into two areas and made a niche for a chest of drawers to hold small items,” Danielle says. Tucked in the space above the chest is an arm-mounted, 42-inch television. “Believe it or not, there are two TVs: one in the kitchen and one in the living area, because Barry and I don’t like the same shows,” Evelyn says. “Even on a weekend in an enclosed space, you want areas where you can do different things.” From a reclining loveseat, Barry can watch television with noise-canceling headphones while Evelyn reads or watches the second television from a thickly padded bench with throw pillows. The custom bench also provides precious storage space with lift-up lids and a deep drawer. Danielle removed much of the wall between the main living space and kitchen, which had been a tunnel with an end dining area that consumed valuable space. “The kitchen is mainly for making sandwiches or something small. They go out to dinner along the boardwalk,” Danielle says. “A dishwasher was a luxury, but we were able to include one by downsizing appliances.” There’s also a small barbecue grill stored above the refrigerator. Gray cabinets add warmth and contrast to the apartment-size, white appliances. The backsplash adds color by way of iridescent glass tiles in variations of turquoise, teal and aqua. “Evelyn loves whimsical touches,” Danielle says. “The backsplash reminded her of mermaid scales. It really adds a lot of impact to the space.”
“We don’t live there every day, so we did fun things we wouldn’t do in our house,” Barry points out. “The backsplash adds color and fits a beach theme.” Balancing bright colors, including the teal loveseat and print upholstery on the bench and in pillows, Danielle chose a gray, queen-size sofa bed encompassing an 8-inch mattress for comfortable sleeping. In the bathroom, she extended the vanity top over the toilet, installed mirrored cabinets and covered the walls from tub to ceiling with marble. Throughout the mini dwelling, she replaced linoleum and carpet with durable luxury vinyl tile that resembles wood planks.  “One of the main considerations was the presence of sand and water,” Danielle says. “Barry and Evelyn don’t want to be slaves to a space they’re there to enjoy.” “It was very important to me that everything be functional: Every drawer, every little space has to offer storage,” Evelyn says. “But I wanted it to also be very beautiful. Danielle paid attention to my desire to make this place happy. The minute you walk in, it is a breath of relaxation.” “This isn’t like the all-time dream home by the beach, but it is a place we can get to in 20 to 25 minutes,” Barry says. “It’s got everything we need. We just grab food, throw our bikes in the car and we are on vacation for a few days.”