A Plan, A Plot, Aplomb 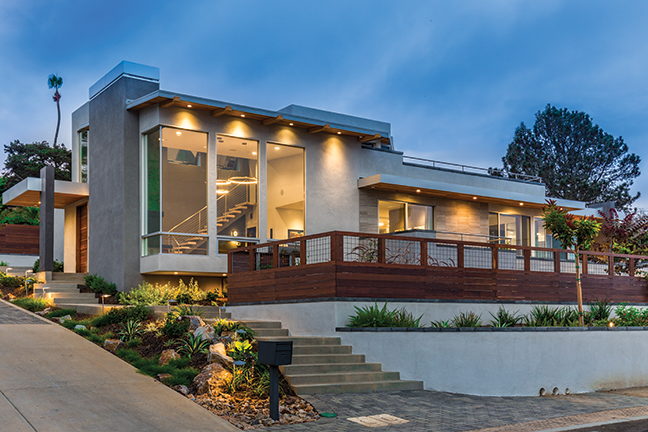 Over the course of 10 years, David Jacobs pulled out graph paper and sketched houses in which he would like to live. He and his wife, Kathy, lived in a 1970s-built, Spanish-style house in Carlsbad. “It was an odd house,” David says. “You had to take stairs to go anywhere. The kitchen was on the top floor and the barbecue on the bottom floor.” In 2012, the couple searched for a home more conducive to their forthcoming retirement years. “We looked up and down the I-5 corridor from Leucadia to Del Mar,” David says. “We saw houses costing over $2 million that still needed a lot of work. So we started looking for land.” They eventually found a lot on a street in Solana Beach just blocks from the ocean — undeveloped but for two houses on one end. The location and price were good, but the property presented a dilemma. “How could I fit one of my pretty graph-paper houses on a sloped lot that’s less than one-third acre? I was expecting a larger, flat lot to spread out on,” David says. He had in mind an L- or U-shaped house with a four-car garage that would accommodate his woodworking hobby. He and Kathy searched online for pictures of architectural features they liked, which they took to architect John Beery. “They gave me a lot of sketch plans. Where they were coming from conceptually was different from the site,” John says. “The visual images sped up the process of capturing what they wanted in the layout, and Jeff Piva of BMG Construction helped in meeting the technical requirements.” 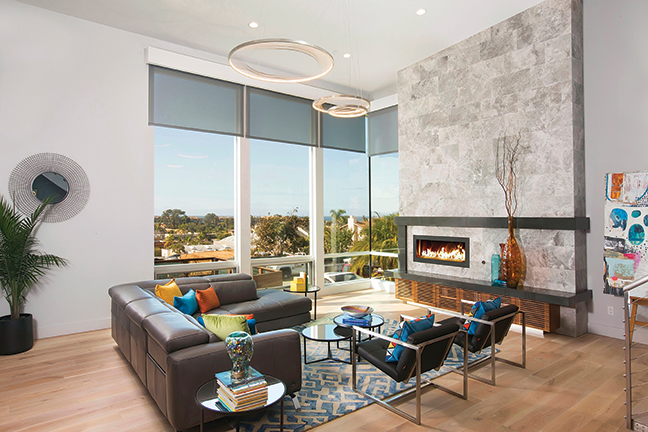 John designed a house with the core living areas, including the master suite, on the main floor; a smaller second floor to accommodate guests; and a basement for woodworking and his clients’ wine collection.
“It also needed to be functional for later years,” John adds, pointing out the three-level elevator and wide doorways. “I have brothers and sisters across the country,” David says. “We’ve been building spaces where we could invade each others’ homes for more than a day or two at a time. That’s the reason for the second story.” The height of the structure required review by the city’s V iew Assessment Committee and meetings between John and a neighbor who wanted to maintain views to Fletcher Cove. “I try to get an ocean view for every space that I can, and we had achieved that in the first go-round,” John says. “We ended up shifting the upper floor and moving one of the bedrooms to the back.” Construction on the house began in 2014 and was completed in 2016. John refers to its style as “contemporary with Mid-century Modern details.” On the exterior, he married shades of gray in a combination of materials: stucco; porcelain tiles featuring wavy, horizontal lines; wood in cedar-bottomed overhangs; and metal for railings and window framing. Along the front of the property, an ipe fence curves slightly, like the side of a ship. What David calls “spiky” plants, such as bougainvillea, are planted on the street side of the fence. Inside the fence are dog-friendly plants, in deference to the couple’s whippets, Charger and Geo. Landscape architect Steve Hare worked closely with his clients to fill their desires for a low-maintenance yard that includes a decomposed-granite pathway, a quiet fountain and as many native plants as possible to incorporate. 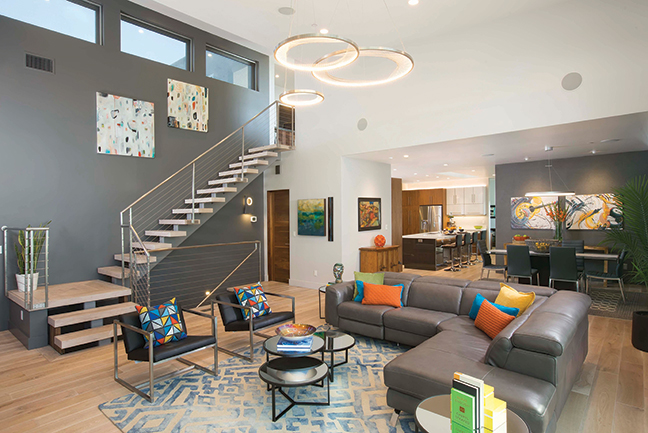 “They had some specifics in mind in terms of color combinations,” he says. “They wanted to go predominantly lavender, white and purple and mix in other colors, like red.” Around the sloped lot’s retention basin, Steve chose plants, such as juncus, that simultaneously demand little water and withstand abundant rain. “I broke the property into small portions,” he says. “I didn’t want it to be dominated by plants that overtake spaces.” In the back yard are lime, lemon and orange trees and a passion fruit vine along the side fence. John placed the home’s entry into the great room on the north side of the house, leaving more room for floor-to-ceiling windows that provide the interior with ocean views. Like all of the interior doors, the front door is solid-core, oiled walnut, though the custom design for the entry includes a narrow, vertical pane of glass.

The great room’s west-facing window wraps around the corner and meets up on the north wall with a fireplace designed by David. Floor-to-ceiling marble fronts the left-placed firebox, while the basalt hearth reaches up the left side to a narrow mantel. “I wanted an asymmetrical look,” David says. Below the stone is custom cabinetry in strips of walnut that conceal audio electronics. With an expanse of bleached walnut flooring underfoot, a trio of ring lights commands attention in the great room. A single ring pendant hangs over the dining area, where John lowered the ceiling to create a more intimate space. Linear-texture porcelain with a hint of sparkle clads a floating wall between this zone and a sunroom.“I wanted a stone-to-stone balance with the fireplace,” David notes. In the adjacent kitchen, walnut faces full-height and lower cabinets; upper cabinets are white gloss laminate with light gray ends. The island features light and dark gray gloss laminate. Caesarstone in Blizzard tops the island and counters, while antique silver-leaf glass tile provides a contrasting backsplash. “That’s the most expensive tile in the house,” David says. “It costs around $100 a square foot. That’s why we didn’t use much of it. But it does make a statement.” 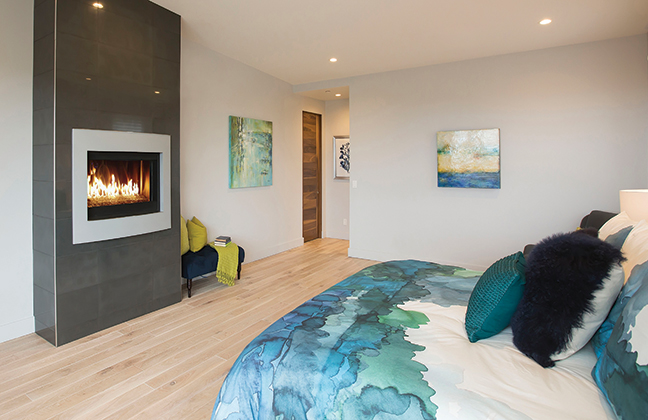 An office with built-in, walnut cabinetry separates the kitchen and master suite. The bedroom features a slanted ceiling and a fireplace faced with the basalt stone used for the living room fireplace hearth and trimmed in stainless steel. Because David didn’t want light from the bathroom spilling into the bedroom, John turned the bathroom doorway 90 degrees so it faces a walk-in closet that includes an island cabinet.
The master bath maintains a sleek appearance with Blizzard Caesarstone on a long, white gloss vanity. A built-in cabinet in walnut fills a niche on the facing wall. Porcelain tiles behind the tub are reminiscent of linen, while the side of the tub and the walls around the shower are dark gray porcelain. 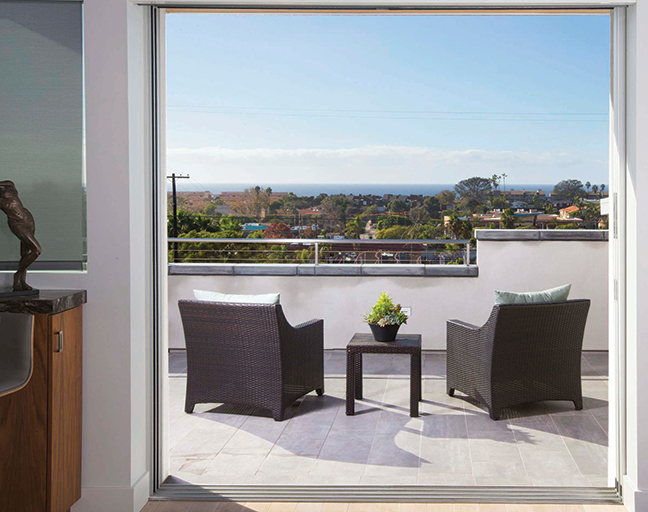 A door in the master closet opens to an exercise room that, in turn, opens to the back patio, as well as to the area behind the kitchen that gives entrée to the laundry room, the elevator and a three-car garage with stainless steel panel doors. The staircase leading from the great room to the other levels is composed of floating walnut treads with stainless-steel-and-cable balustrading. At the top of the stairs lies a guest lounge with a built-in wet bar and an ocean view. Pocket doors open to a balcony for watching sunsets over the Pacific. Beyond the lounge, a hallway leads to two bedrooms and two bathrooms placed at angles to maintain the neighbor’s sight line.