Strangers in the Night

On certain evenings, the side gate at a modest Craftsman home in South Park becomes an enchanted entrance to the magic of 12 strangers bonding and forging friendships. Hostess Audrey Jacobs and Chef Peter Calley — co-founders of Culinary Hedonism Supper Club — brandish the wands that fuel the wizardry. Guests arrive just as night descends. Word of mouth, various blog sites, Audrey’s Facebook page and her Nextdoor posting led them to this gathering. The excitement in their voices signals high anticipation for a memorable dining experience. As suggested, each has brought a favorite alcoholic beverage to share — along with a story, poem, song, quote or joke to enliven the conversation. 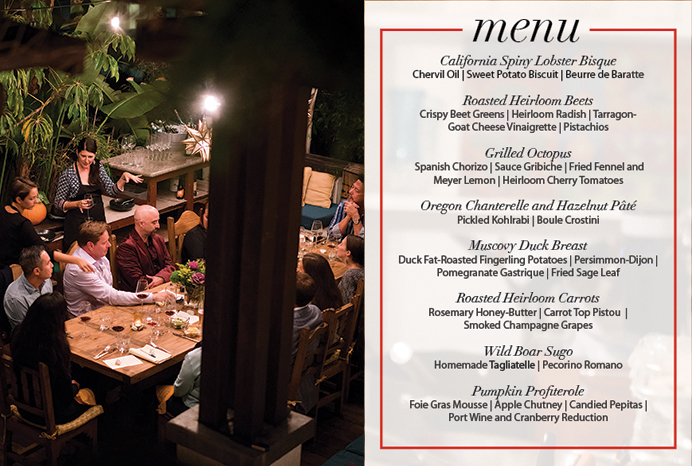 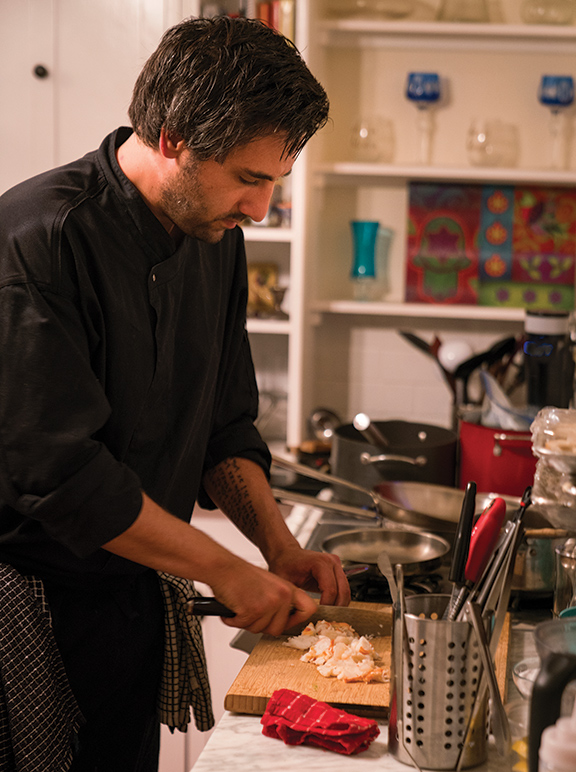 Audrey welcomes each guest as they enter the secluded space designed by the previous homeowner, landscape architect Paul Hunyady of Mooch Exterior Design. Dave Brubeck’s light jazz plays softly in the background. Invitees first notice the warmth of flames from two cement fire pits and tiny lights adorning a large jacaranda tree that echo the twinkling stars above. But they gravitate toward the sunken dining area, where a simply dressed, wooden table with Spanish-style chairs takes center stage and a lengthy, cushioned bench provides comfy seating. Laura Fleig, head server and part of Peter’s entourage, stands at the ready by a side table that holds beverages and an assortment of glasses. Peter, sous chef Stephanie Corneil and chef’s helper Guadalupe Cruz busy themselves in the home’s tiny kitchen, readying eight tasting courses, which need to be not only prepared in a timely manner but also beautifully presented. (By evening’s end, Peter and Stephanie will have arranged food onto 96 plates.) A ceiling fan whirs cooled air down onto the trio. In one corner, Stephanie pours oil on top of greens in a salad bowl. At the sink, Guadalupe cleans a pot. Next to the stove, Peter chops lobster. A menu, handily taped to the wall, lists the dishware to be used for each item. Outside, guests choose dinner seats. Still a tad shy, couples sit next to each other. People-oriented, fun-loving Audrey stands at the head of the table. 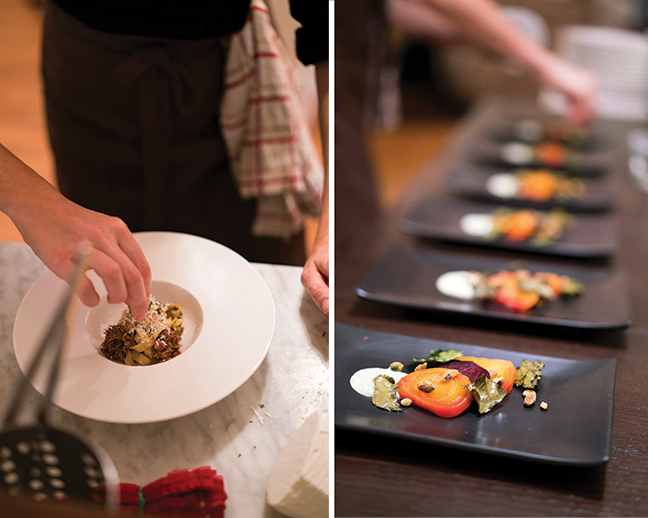 “I want to welcome you all to my beautiful backyard oasis — a space specially created for people to connect,” she says. “I love entertaining, and I’ve always entertained as much as I could. My dream was to open my home to more than just my family. I wanted to create events, sort of like the salons of the 1920s, where people could meet new friends while enjoying good food. For the dining aspect, I needed the perfect chef-partner and was lucky to find Peter Calley, owner of Culinary Hedonism.” As Audrey speaks, Peter makes his way down the steps from the kitchen to stand next to her. He wipes his hands on one of two towels tucked into his apron. “Connecting with Audrey fulfilled my vision to share my love and passion for the Slow Food movement in a beautiful, intimate, outdoor space,” Peter says. “Culinary Hedonism offers cooking classes and dinner parties at clients’ homes. But I also had a dream of people sitting together in a small group like this, enjoying a one-of-a-kind experience with special ingredients and foods that they never would make at home for themselves.” 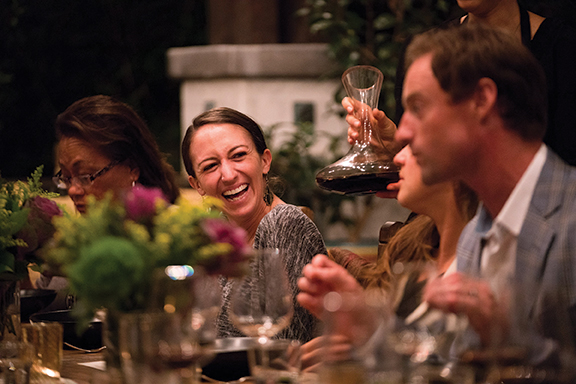 Guests remove the jade-like stone from atop their napkins, place the cloths on their laps and delve into the velvety lobster bisque they have been served as Peter continues talking. “When I am creating a menu, it’s basically kind of like a song. I approach the whole meal as music with melody, harmony and rhythm. I want to create a memorable experience with each dish,” he says. “I like to consider and appreciate where our food comes from and put time and love into the dishes I make. I have great respect for traditional culinary techniques, but I also want to try new things. I like to reflect on my menus what farmers are growing in each of their seasons.” A timer goes off in the kitchen. Peter wraps up his talk with a portrayal of his team and the ingredients in the lobster bisque. He says he hopes that everyone enjoys the first course and then excuses himself to resume his culinary duties. He returns from time to time, whetting diners’ appetites by feeding them mouthwatering descriptions of the dishes as they are being served. Audrey asks who would like to share their story, poem or joke. No one raises a hand. Finally, from the far end of the table, Sheen Fischer offers to go first. He tells a tale of woe about being a sad orphan adopted by an Irish couple because of his red hair. It seems unlikely that Sheen’s coal black mop has ever been red, but everyone is leaning in, totally absorbed. The ending  — “I’m trying to get my mother out of the taxi by pulling her leg … just like I’m pulling yours” — gets participants laughing and eases the way for others to contribute. 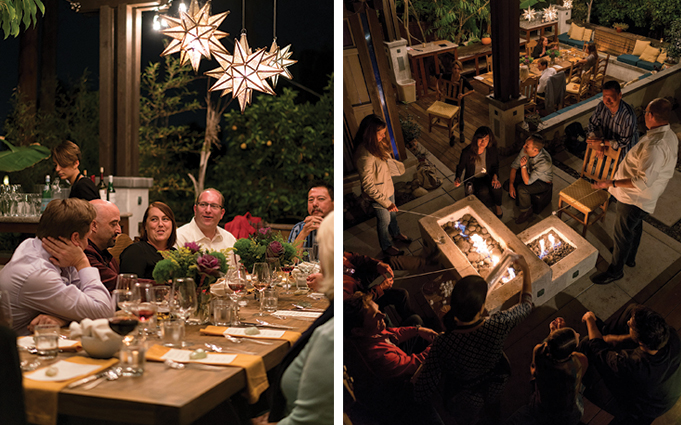 The diverse individuals at the table include people like Stephanie Norton, a veteran who grows heirloom fruits, vegetables and herbs on the grounds of the Wallace D. Dickinson House in National City; Stephanie Parker, co-founder of Epicurean San Diego, a company that raises awareness of local artisans by leading tours that “go behind the curtains” of local farmers markets (she brought much-appreciated craft beer to the dinner); and David Bruemmer, a pioneer in the robotic technology field and owner of 5D Robotics, a company that crafts autonomous drones, automobiles, industrial equipment and personal mobility devices like wheelchairs. With each tasting, more stories spill forth. Some are simple tales of how couples met. Others are deeper, more personal tellings. Applause follows each rendition. As Steve Fabry discusses working on a first novel, sous-vide Muscovy duck breast appears. Perfectly timed is the pouring of guest Jean Cote’s special 2001 Clos Saint-Michel Châteauneuf-du-Pape cuvée. As everyone oohs and ahhs over the light-as-a-cloud pumpkin profiterole dessert, Audrey shares the three-step life lessons she wrote on a large wooden board: 1. If you don’t ask, you don’t get. 2. Never take “no” for an answer. 3. No fear.
The guests clap in agreement. But now that they are friends, they are not ready to go home. Ever the gracious hostess, Audrey couldn’t be more delighted — and she’s prepared. There’s “s’more.” Long sticks, graham crackers, chocolate squares and marshmallows are waiting by the fire pits. And now that dinner is over, even Peter has time to grab a stick to join in the fun.