San Diego’s romance with a Mediterranean luxuriance of citrus trees bearing golden fruit and glittering green leaves — plus a magnificent view of San Diego Bay — is a leitmotif in a renovation by architect Bill Bocken. The historic 8,300-square-foot home he shares with his life partner, Paul Adams, sits on a terraced Point Loma hillside in the neighborhood known as La Playa. It looks directly down on the source of Bill’s design vision: the sparkling blue-and-white scene surrounding San Diego Yacht Club. Today “the home has a whole new relationship with the outdoors, with its wonderful city and bay views. Small hints of modernity throughout bring it into the 21st century,” Homes of the Year judge Jimmy Sullivan notes. Approaching the house stirs a memory of Italy’s Amalfi Coast and a whiff of 1930s Hollywood glamour. A small field of white ‘Iceberg’ roses has been planted streetside. A gnarled cypress rests its elbow on the pillar at the entrance to the steep driveway that drops down to the front door and large iron gates enclosing a large parking area. Ficus nitida hedges provide privacy where necessary. “The existing home had extremely good bones, but the interior had undergone many changes over the years,” Bill says. “The result was a dark, formal home with garish touches of color.” 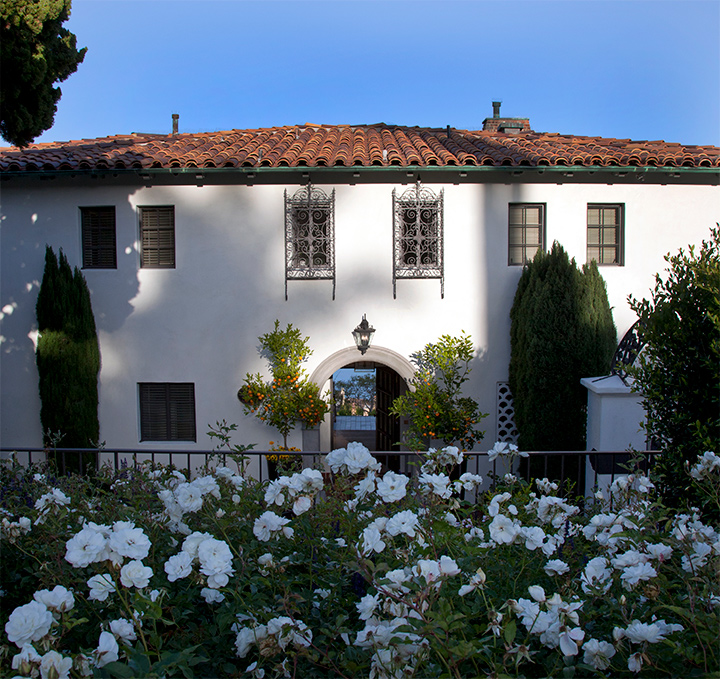 The exterior railings, window grilles and iron gates in teal, as well as the front door and interior railings in chocolate brown, were stripped to their original finish. Steel case windows and hardware were preserved. The multicolored, coffered ceiling above the entry’s dual staircase is now an unpretentious white. The home’s grand scale acknowledged another age of manners and conventions, with many servants’ and other enclosed rooms. New exterior touches are all cosmetic due to restrictions on historic homes. The musty and shadowy interior, though, has been thoroughly lightened with a unifying palette of white, while structural changes removed walls to capture views from almost every room. Open the front door and the view goes straight through the house to the terrace and bay beyond. The dining room became a family room that is open to the kitchen/breakfast area through the removal of walls. The butler’s pantry was converted into part of an enlarged kitchen and the servants’ hall into a pantry. 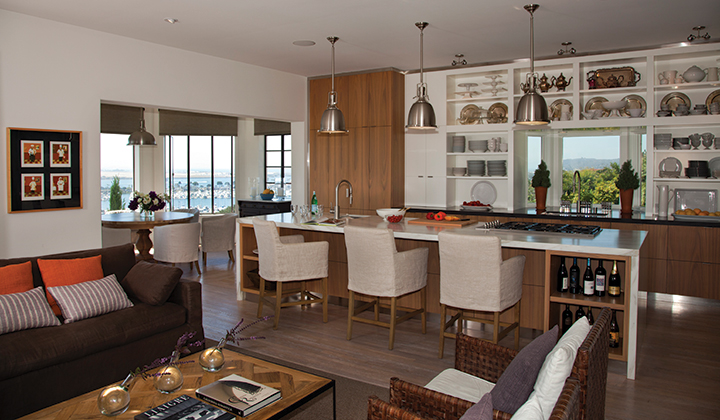 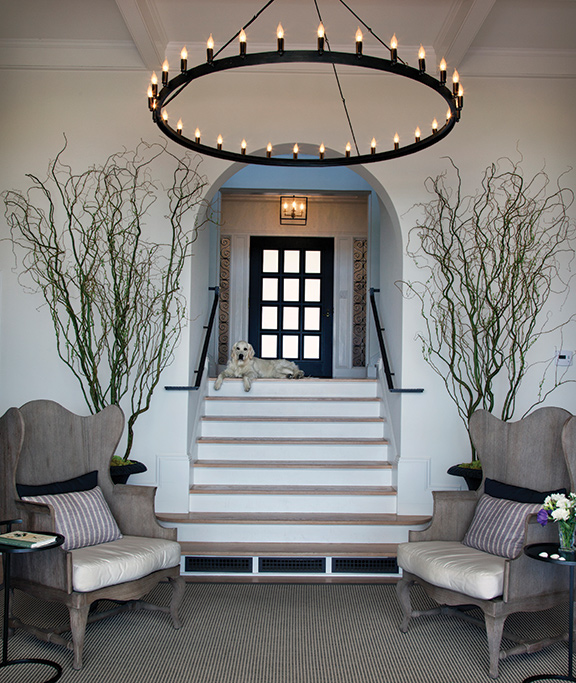 Kitchen lighting fixtures, reimagined by Jim Gibson (an expert on antique lighting), nod to the yachting theme. The home’s six bedrooms (two used as offices) and eight bathrooms reside on three levels. A craft/laundry room, game/media room, gym and wine room are on the lower level. Also on the lower level are self-contained guest quarters that include a bedroom, bathroom, full kitchen, living and dining spaces.A few steps down from the entry lies the foyer, which Bill and Paul call “the lobby” — as in “Meet me in the lobby.” The main floor also includes a guest room, family room, kitchen with a breakfast/dining alcove, library/dining area and living room with a terrace. The upper-level guest suite is designated for Bill’s elderly father when he visits from Hawaii. An elevator provides access to all three levels. Mirrors over the vanity in the master bathroom fold open to create a window to the master bedroom, capturing the bay view beyond. A dressing room with two walk-in closets offers practicality as well as first-class luxury. 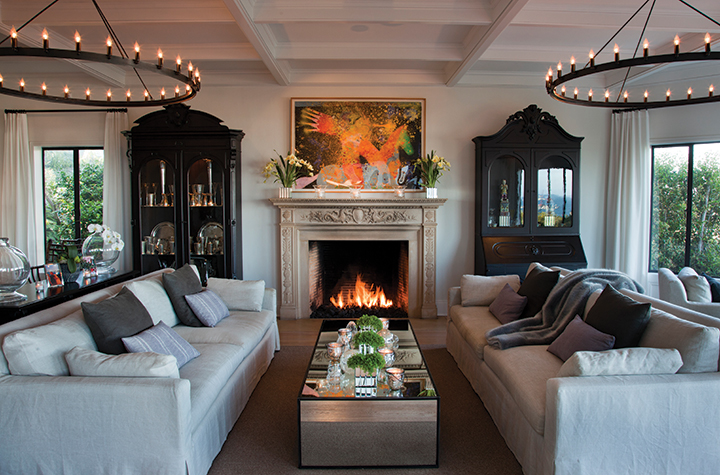 Sleek, modern cabinetry throughout the house is walnut with a teak finish. Much of the flooring is the original white oak, refinished and sealed with a water-based coating so it will not turn yellow. A seahorse design accents the original, carved-stone fireplace in the living room. The new, lower-level fireplace features beveled steel panels to reflect the firelight and an Absolute Black granite mantel and hearth. Much of the home’s furnishings are tailored classics and covered in white or natural linen or cotton. Bill and Paul sold their last house with most of their furniture, keeping a few family pieces that mix comfortably here with new items. Bill’s transformation clearly reflects the relaxed, Southern California lifestyle, with an emphasis on the outdoors that he and Paul enjoy. A retractable, white-canvas awning (a connection to the world of sailing) shades the large viewing terrace on the main level. 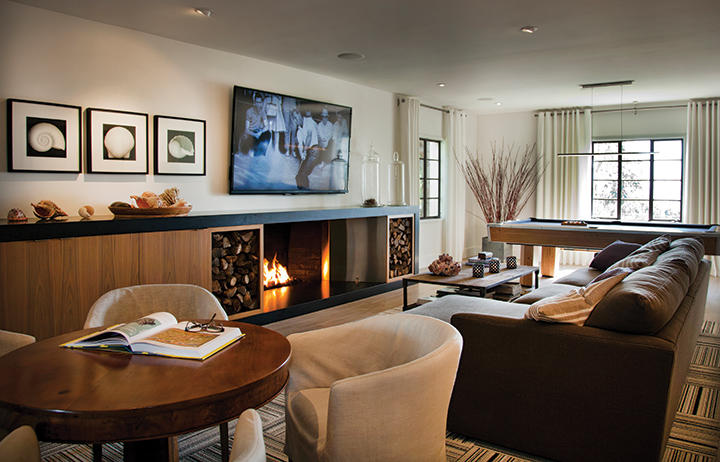 Entertaining often includes a table for 18 or 20 placed down a hallway or outside on the terrace for large gatherings of family or friends from their world of design (Paul is a landscape designer). The terrace leads down to a pool and spa, where faux turf and a fountain were removed. There was no access for heavy machinery, so the pool was dug by hand. The property is planted with a veritable orchard of lemon, lime, blood orange and fig trees. The lowest level comprises an organic vegetable garden that produces tomatoes, squash, carrots, artichokes, lettuces and a variety of seasonal herbs. The City of San Diego Historical Landmark plaque by the front door states that the Point Loma home was built in 1935 for Lawrence and Mary Oliver by architect Frank Hope Sr. Research indicates that Lawrence Oliver was a Portuguese immigrant from the Azores who flourished as part of the local fishing industry. His legacy also encompassed real estate, including a golf course and a cattle ranch in Descanso. He reportedly helped bring the statue of Cabrillo to San Diego. He donated part of his ranch to found Camp Oliver, still a destination for young campers. 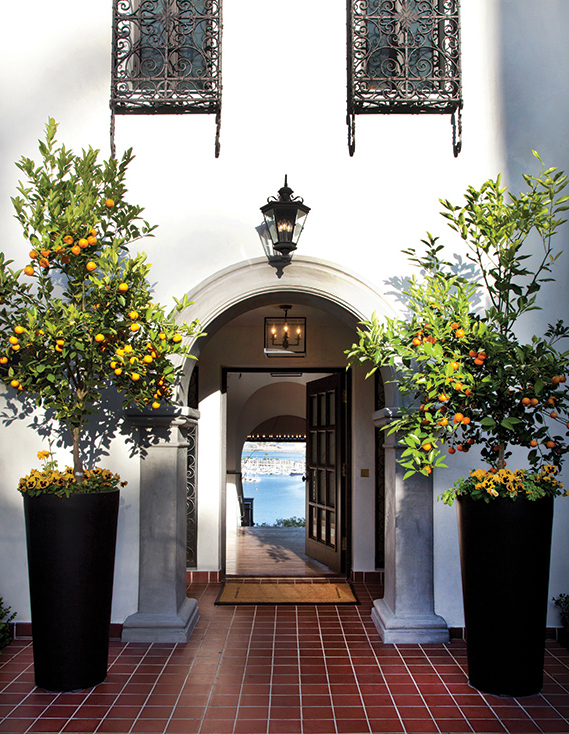 Frank Hope Sr. also figures prominently in San Diego history, as the founder in 1928 of an architectural firm that has continued through several generations. It is easy to see why Oliver chose him to build his La Playa home in Spanish Revival style, as Hope previously had worked with Requa & Jackson and William Wheeler. “The bones of the existing home were successfully adapted to our modern times, while retaining the warmth and beauty of the ’30s,” Homes of the Year judge Matthew Segal says. “I still see and feel the glamour of its first resident.”  “This project, although just a renovation and remodel, was more expensive and more complex than a smaller new home we built,” Bill says. “We purchased this property in 2012, renovated in phases and lived in it during the process — not something I would recommend. However, living here now is pure magic. You feel as if you’re part of everything going on in San Diego and on the bay. At the same time, it is very quiet and serene. The big problem is you never want to leave!” 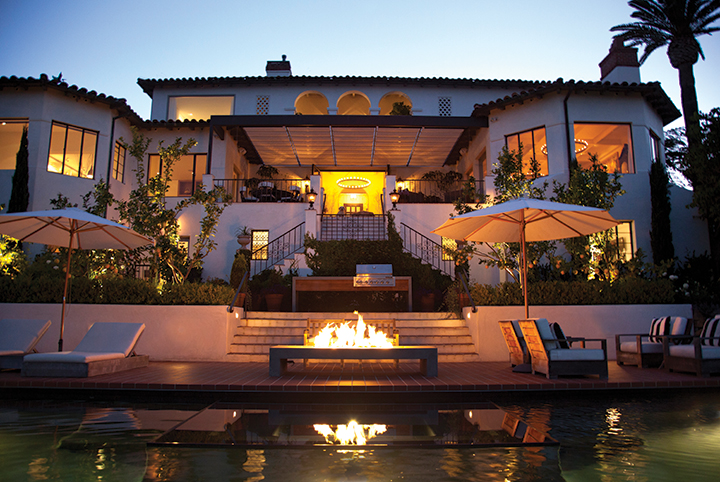