All plants face a test before PJ Puterbaugh adds them to her garden. “If it doesn’t flower, fruit or have amazing fragrance, I’m not interested,” she says. Since 2001, her careful choices transformed the once-barren construction site around her Carlsbad home into an exuberant landscape — part tropical paradise, part charming cottage garden, and part playground for her family, including three grandchildren. Ask about a vine with shell-shaped flowers or a tree-size gardenia and PJ is likely to answer with Latin botanical names. That in-depth knowledge, along with her passion for gardening, is rooted early in her childhood with her England-born mother in Arkansas. “In winter when it snowed, we’d pore over the Burpee catalog,” she recalls. “I learned the botanical names, but I was really drawn to all the colors.” Underlying that attraction was PJ’s artistic talent, nurtured in Arkansas schools and later in San Diego, where she and her mother moved when her parents divorced. After a few months at the University of California, San Diego, where her representational art clashed with the avant-garde, she dropped out. For the next 12 years, as she raised four sons with her husband, Kip, PJ poured her creativity into gardening. “It filled the gap — absolutely,” she says. 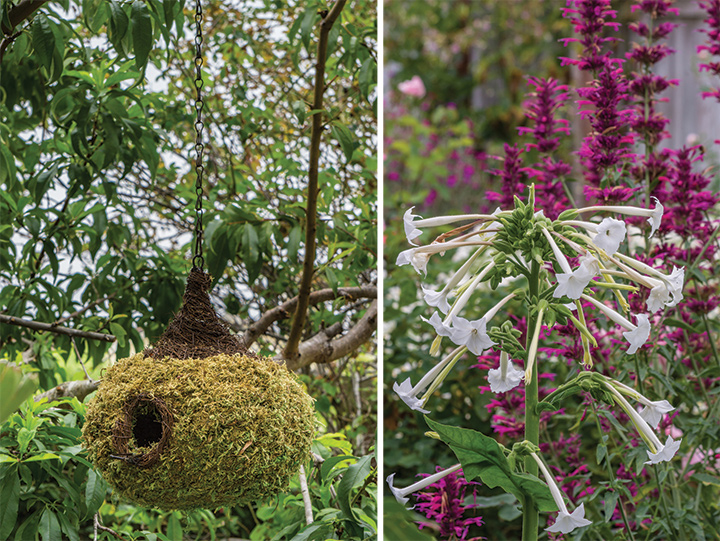 Since finding an artistic home at Watts Atelier of the Arts in Encinitas two decades ago, she paints portraits in what had been her home’s dining room — a space where tall windows usher in light and garden views. From this vantage point, she watched tour-goers wander paths she designed during last spring’s San Dieguito Art Guild Art and Garden Tour. On their way to the garden gate, visitors pass a long, broad, streetside border that shields the house and obscures the low wall and fence it parallels. At the feet of tall Queensland pittosporum, queen palms, tea trees and camellias lies a tapestry of pentas, scented geraniums, lion’s tail, salvia, gladioli and other bulb flowers, night-blooming jasmine and more. “It’s a living, breathing thing,” PJ says of ongoing changes to the mix that spark questions from dog-walking neighbors and kids seeking blossoms for school flower days. “I love to give away flowers and other things I grow — to give people pleasure and help them learn,” she says. Along the driveway is the first of the garden’s five topiaries: an 8-foot-long, winged dragon cloaked in creeping fig, with two inky aeoniums as eyes.

A playful lion, elephant and two dogs (modeled after the family’s Labrador retrievers) pop out unexpectedly around the garden “just for fun,” PJ says. T wo angel’s trumpets with pendulous, pale peach and ivory blossoms announce the tropical garden that stretches past the front door along the warmest side of the house. Flanking a tiered fountain on the patio, two orange-flowered orchid cacti flare above their containers like oversize sparklers. Azaleas, cymbidiums and other orchids enjoy shady nooks below giant birds of paradise, palms and a handsome Gardenia thunbergia tree with intensely fragrant, star-petaled flowers. 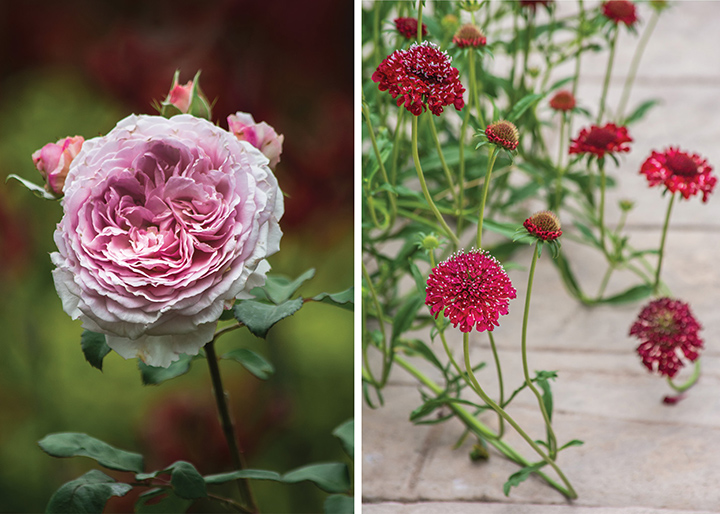 “I heard about that gardenia on a radio garden show,” PJ says. “If you want to see one, the announcer said, come to the Walter Andersen Nursery and follow your nose. So I did, and I had to have one.” Rounding the corner toward the back yard, mophead hydrangeas, including ‘Ayesha’ with silky pink petals that age to lime green, bob gently against a fence and beneath kitchen and great room windows. Steps away is an artificial-turf putting green, where family and friends practice under golf instructor Kip’s expert eye. For kids, there’s a playhouse nearby. Beyond, undulating boxwood hedges barely contain a riotous mix of roses, citrus and cottage flowers that overflow two rectangular beds made possible when PJ had the 250-foot-long backyard bank pushed back 10 feet. 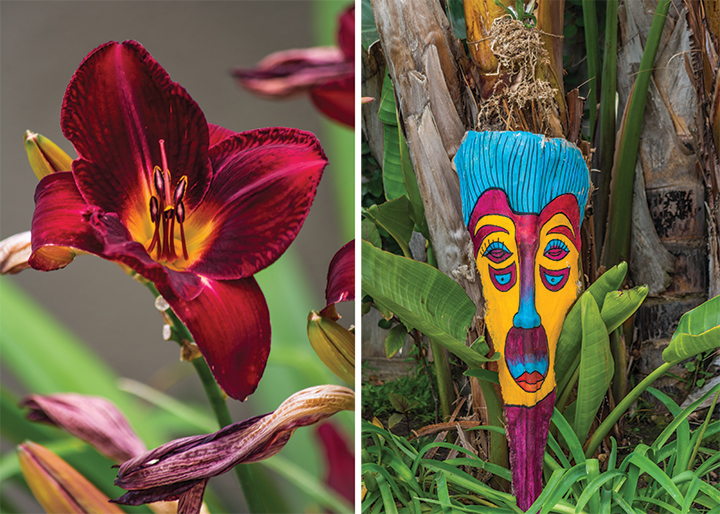 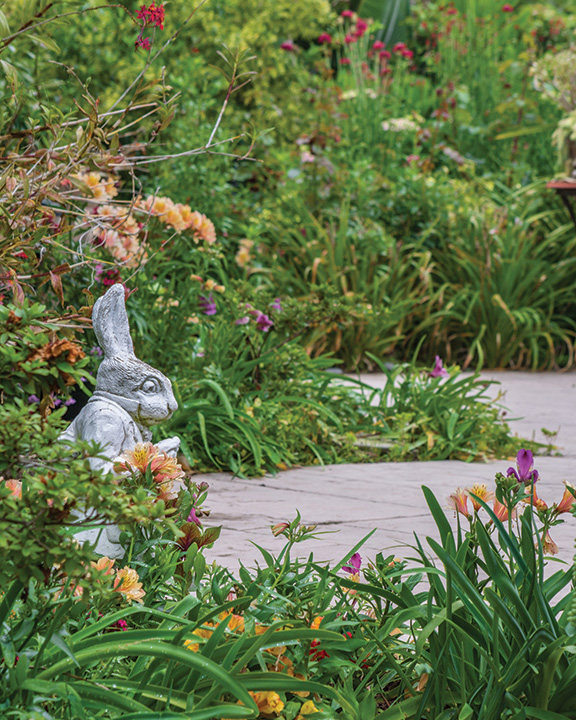 “I think of this as controlled chaos,” PJ says with a smile. “But I find it more relaxing than something superorderly.” PJ, who studied with Carlsbad-based floral artist René van Rems, often raids the garden’s bounty for arrangements and bouquets that inspire still-life paintings. When two of her sons wed, she created the flower arrangements. Spurred by her restless creativity, PJ occasionally thinks about moving and shaping a new landscape. “But then I realize, I’m so happy to be here,” she says. “I’ll turn on the fountain and relax, enjoying the garden all around me.” 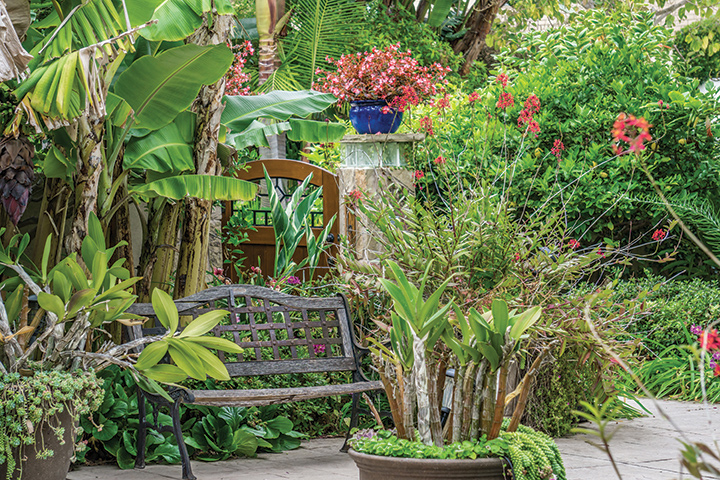