Visitors to San Diego State University’s Love Library may not be searching for a Polish translation of Dune, but could stumble upon it in the library’s newest space: the Edward E. Marsh Golden Age of Science Fiction Room. In 2012, one-time SDSU student and then-Escondido resident Edward Marsh donated the bulk of his science fiction collection to the school. Filled with signed first editions, the donation was valued at $2.25 million. Subsequent donations from the collector have more than doubled the value, and a dedicated Edward E. Marsh room is scheduled to debut this spring in a prominent, first-floor spot at the Malcolm A. Love Library. “The room is going to bring attention to our science fiction holdings overall,” says Anna Culbertson, special collections and university archives librarian. “Even before [the Marsh donation], our collections were incredible. It’s not well known just how great they are. I see a real opportunity to promote what has been hidden for years.” By “hidden,” Anna refers to the special collections department’s location away from student traffic. Its use has come primarily by way of professors bringing their classes there to introduce students to resources for assignments, as, for example, in Humanities 409: The Future.

“We don’t get too many serendipitous visitors,” Anna says. “But when we are in the new location, we are going to be in the middle of the library. When students realize what’s in there, they’re going to be interested in checking it out. I think we’ll be inundated with requests to use the materials.” The books, she explains, will be in locked, glass-fronted cabinets. The room also will have paintings hung on the walls and display cases exhibiting 3-D and unbound items (photographs, clippings, sketches, prints, etc.). Ephemera in the collection include a film reel of H.G. Wells’ The War of the Worlds, movie props and memorabilia. There are 55 translations of Dianetics and various versions of Frank Herbert’s Dune, including a pop-up panorama book, the David Lynch screenplay and the Marvel Comics adaptation. Marsh collection books date back to 1870s works by Jules Verne and continue up to the last few years. The catalog of more than 1,000 published works encompasses a powerhouse list of science fiction authors, such as Wells, Isaac Asimov, Ray Bradbury, Robert A. Heinlein, Arthur C. Clarke and L. Ron Hubbard. Perhaps best known as Church of Scientology founder and Dianetics author, Hubbard was a prolific writer of science fiction. Among the Marsh collection is the costume for Terl (John Travolta’s role) in Battlefield Earth, a film adaptation of Hubbard’s novel set in the year 3000. Artwork — including fantastical illustrations by Hannes Bok, Frank Frazetta and Frank Kelly Freas — plays a significant role in the collection. According to Robert Ray, head of special collections, SDSU’s science fiction holdings began with the 1977 donation from the late Elizabeth Chater, who taught creative and science fiction writing at the school. 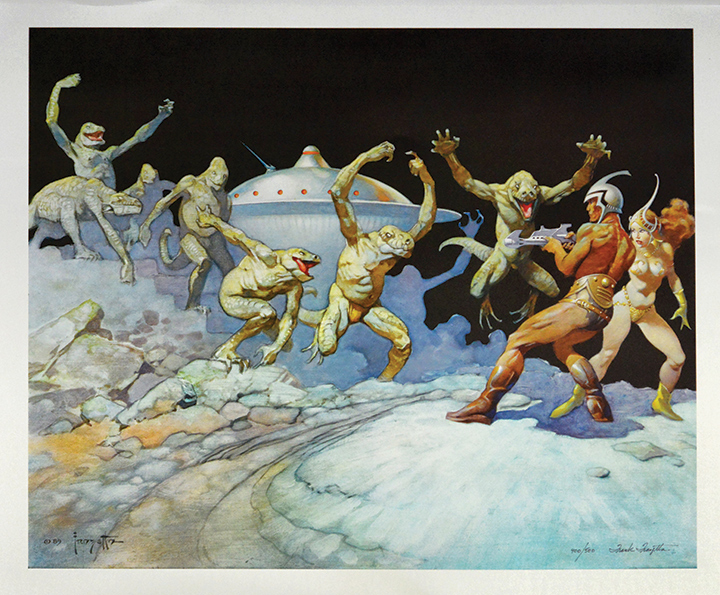 “Science fiction is a scholarly and serious endeavor, but it is consumed largely as part of popular culture,” he says. “We want to create a center for the study of popular culture — science fiction being one of the more wonderful jewels in the crown.”Robert credits Anna with increasing SDSU’s science fiction holdings through talks she’s given outside the school.
“The largest collection received was after a lecture I gave on the Chater collection at a science fiction conference,” Anna says. “Michael and Susan Watson donated volumes of science fiction books and some magazines.” More recently, Jack Sword and Laura Gordon donated their collection of books released by Arkham House, publisher of H.P. Lovecraft and other macabre writings. “We got on their radar because of the Marsh gift,” Anna says. “Jack started donating science fiction comics, graphic novels and science fiction materials. “We’re going to be experimenting with a pop-up corner in the Marsh room a couple of times a semester with bringing out comics for students to browse,” she adds. “The books and ephemera will attract students and researchers to visit the room, which may inspire them to explore other special collections,” Robert says. “The goal is to make the department visible so that it gets used.” To reach that goal, SDSU plans to convert the spaces surrounding the Marsh room into a broader special collections space. “We need to raise funds to construct three walls to make that happen,” Anna says. “Our hope is that we could see that happen within the next five years. My goal is to market it as a space for all things concerning pop culture and speculative fiction. And I want to work on getting visiting research scholars to use the space. I feel that we are quickly becoming one of the top centers of pop culture scholarship in the country.” “Anyone can access our special collections,” Robert notes. “People have come to think that because it’s protected they are not allowed to enter without academic credentials. It’s open to anyone.”