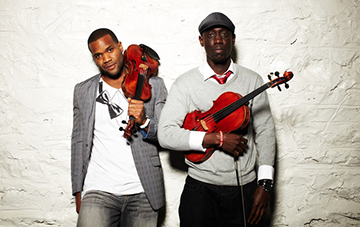 When people have talent, especially one that makes them rich and famous, they can indulge their own egos. And that’s often what they do. After all, they don’t need to put themselves out for the benefit of other people. Celebrities can get along just fine performing and depositing money in the bank.

So when you learn about people like Wil Baptiste and Kev Marcus, you have to sit up and take notice. The duo, performing together as Black Violin, have interesting backgrounds, which you can read about in numerous online articles. Classically trained on the viola (Wil) and violin (Kev), they have been defying stereotypes — mixing hip-hop and other musical genres into their craft.

Black Violin performs this Thursday, Feb. 2, at California Center for the Arts in Escondido. I was already interested in going to their concert when I learned that they also are making themselves available to talk with local educators in a late-afternoon discussion on the power of music for Art=Opportunity, a project of California State University, San Marcos’ Center ARTES.

Intrigued, I accepted an offer from California Center for the Arts to interview Wil Baptise by phone. I asked him about his and Kev’s commitment to participating in programs geared toward teachers.

“A lot of venues, particularly theaters, do a lot of outreach into their communities, and we are good spokesmen for that,” Wil says. He notes that Black Violin encourages venues to invite a youth orchestra to a concert and to join them onstage for a final number, sit in on a sound-check “or whatever we can do to put our stamp on the community, particularly with kids,” he says, adding that Black Violin performs for 100,000 students a year bussed in for daytime concerts.

In fact, Wil and Kev are giving a concert for 700 local students on Thursday. With a morning student concert, afternoon discussion for teachers and evening concert for the public, that’s a full day for the duo.

“We think it’s important, because we see the effect of music on kids’ faces. We see their eyes light up, and that’s a big responsibility we feel we have,” Wil says. “We know the effects of having arts in our lives. It made us better students, because we had something that we were focused on. That helped us in turn focus on math, science and other classes. It gave us confidence. I remember playing my first solo. Afterwards, I felt good about myself.”

Wil says that teachers and parents need to push for arts in schools, because no matter what fields students ultimately pursue, “they’re hopefully going to be better human beings because of arts. We see it very day; we can’t just ignore it.”

Black Violin sends a message about the power of music, but also about busting stereotypes, which they have done and continue to do. They didn’t sit down and decide to be messengers, but, Wil says, “It took root organically. As we grew as artists, we saw the power of our music. Listen, this is bigger than us individually, so it’s something incredible and we own it.

“If you go to a Black Violin concert, you’ll see an incredible diversity of people — people from all walks of life that might not come together unless they’re at a Black Violins concert,” Wil says. “The impact we ultimately want to have is for people to see each other for who we are. You look at me and you see a tall black guy with a viola. And whatever perception you thought of me is probably shattered because of the way I play. Our goal is for people to go out into their community and look at people without assuming this person can’t do this or that. Hopefully, we can mend the divisiveness in today’s society.”

If that sounds like a lofty goal, it is. And that makes what Wil Baptiste and Kev Marcus do even more extraordinary.

Incidentally, Black Violin has a connection with San Diego beyond its appearance on Thursday: They co-scored the theme to Pitch, the TV show about the first woman to play Major League Baseball as pitcher for the San Diego Padres.