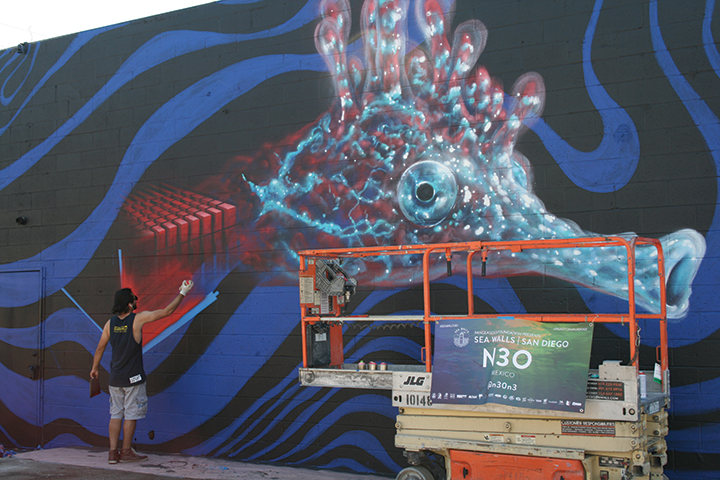 An orange octopus swims sideways, one of his tentacles wrapped around a worried-looking, bright blue and green fish. The image draws onlookers into an alleyway on the south side of Wonderland Ocean Pub in Ocean Beach. Jason Botkin is brushing on the final details of his cephalopod mural. A sign tied to a railing identifies him as an artist from Montreal participating in September’s Sea Walls | San Diego. Another 18 artists are painting murals throughout the city, as well as in Encinitas and Imperial Beach, over the course of four days. “None of us is getting paid, but that’s the point of activism — in this case, ‘artivism,’” Jason says. “What stirs people is their convictions toward an issue, and images speak to those convictions. When you approach it with this intention and within this framework, it’s a powerful tool.” “Artivism” is a term used by PangeaSeed Foundation, whose mission is to raise awareness and inspire positive change around ocean environmental issues. Over the past couple of years, it has brought together groups of artists to create murals in far-ranging locales, including the United States, Mexico, Canada, China, Taiwan, Vietnam, Sri Lanka, Indonesia, New Zealand and Grenada. Local artist Christopher Konecki, West Coast regional coordinator for the project, estimates the San Diego event brings the number of Sea Walls murals to 100. 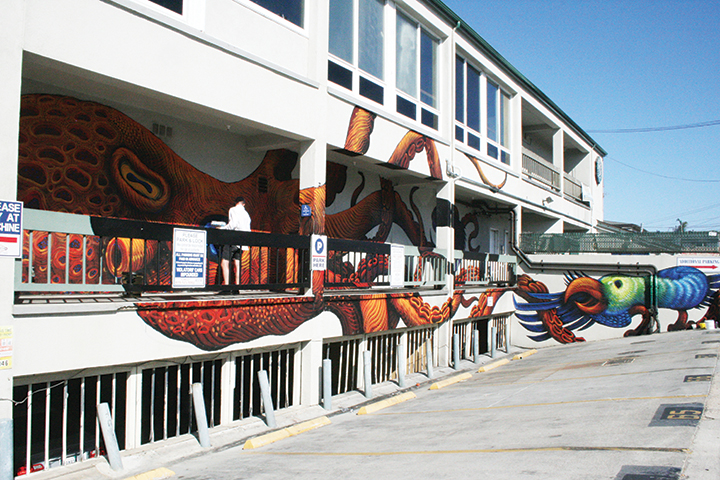 “I think of it as being hand-painted billboards for the environment,” he says. “We are sponsoring Mother Nature.” For his fourth Sea Walls project, Christopher is spray-painting a life-size blue whale on the corrugated metal siding of BJ’s Equipment Rentals along Pacific Highway, across from San Diego International Airport. On the side of a University Heights building along Park Boulevard, Cinzah Merkens paints sharks in blue and orange. “Ninety percent of the shark population has been wiped out, which is pretty scary,” says the artist, who has participated in Sea Walls projects in Toronto, Grenada, Bali and his homeland of New Zealand. He notes that comments from local residents passing by have been positive. On the other end of the wall, Robert Guttierrez of Guanajuato, Mexico, assuming the moniker N3O, paints a sea horse. This is his second Sea Walls mural, following one in Cozumel, Mexico. 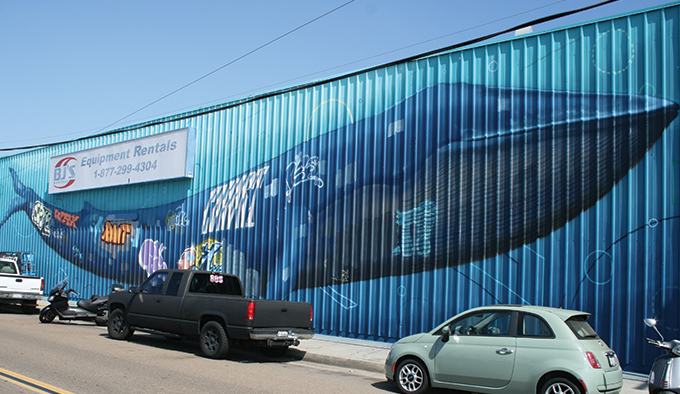 Also on the site is Erin O’Shea, a visual arts professor at Saddleback College in Mission Viejo, who saw an Instagram callout for volunteers. “I brought three students down with me,” she says. “They are huge fans of these mural artists. Their generation is very interested in public art; it’s a great way to reach an audience and make art accessible to everyone.” Erin has plans to institute a mural project on the college campus and at Orange County Great Park in Irvine, so volunteering for Sea Walls provides her and the trio of students a lesson in execution. The success of Sea Walls rests on sponsorships, which include Pinturas Osel, a Mexican company that Jason says supplied 15,000 gallons of paint for the San Diego project; All Access Rentals in Spring Valley for the loan of scissor lifts; and underwriting that covers travel and lodging costs for the artists. The San Diego project occurred immediately before Kaaboo Del Mar, a music festival with an art component that is curated by San Francisco-based muralist and Sea Walls artivist Amandalynn. Fellow San Franciscan and muralist David Young — who has painted walls in Hong Kong, Istanbul, Thailand and Mexico — was in town for Kaaboo and came early to paint his first Sea Walls mural — a Poseidon/Neptune-inspired face — on an outer wall of downtown’s Silo in Makers Quarter. As in other locales, passersby have asked what’s going on and, in David’s case, whether they can help: “Do you want me to get you coffee?” “Of course,” he says. Given the murals’ message about sustainability, one could consider it ironic that Mother Nature herself will test their ability to withstand sun, the ocean’s salty air and the passage of time. But Jason, for one, reasons that is OK. “Public art should breathe and be a reflection of what’s happening in society,” he says.