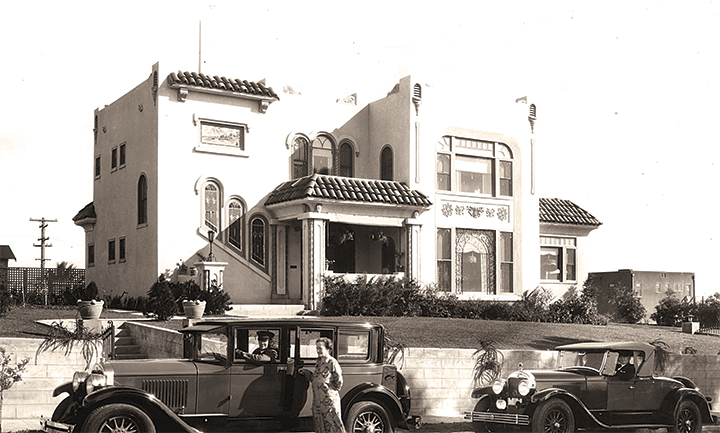 A Mission Hills couple had discussed expanding their home. One of their neighbors, a longtime friend, strongly encouraged them to instead buy a 1924 Spanish Eclectic residence a few blocks away. The dwelling seemed a good match for Thomas and Mary and their teen twins. They saw great potential, though knew it would be a long road to restore the home’s original splendor. The couple interviewed five architects and five contractors in an effort to find the right team for realizing their vision for rehabilitation and preservation. “They found me because I do a lot of historic projects,” says architect Kim Grant. To oversee the building process, they hired Jacob Nieder of Crest Construction. It would be his first historic undertaking, and he was determined to get each detail just right. Searches of historical records failed to reveal the original architect, but permits were issued in 1924 to builder Frank Wheeler. A retired businesswoman and her husband moved from Kansas to San Diego and decided on the site with expansive views over San Diego Bay. 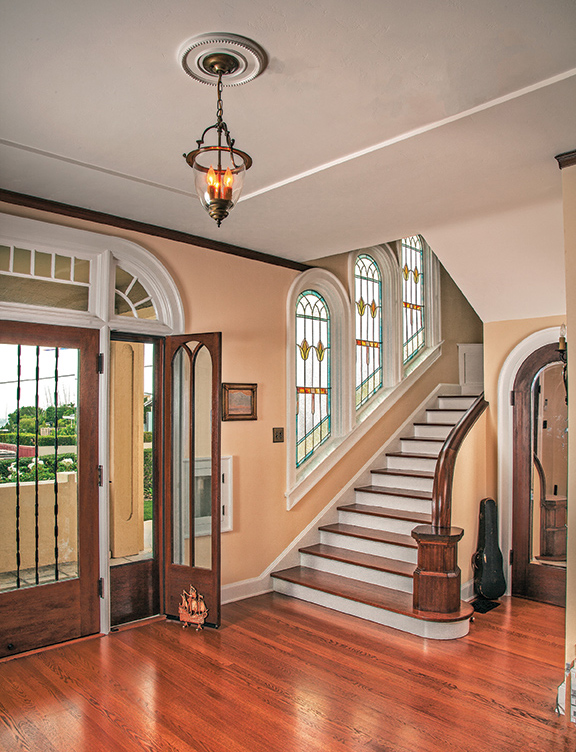 Thomas and Mary’s predecessors had lived there since 1941, long enough to oversee substantial changes from the original design. Ornamental touches had disappeared, vinyl windows had been installed, a sleeping porch was added and utility lines were affixed to the home’s front.
“When we bought the house, a lot of the glass doors were in the garage,” Mary says. As visitors approach the home’s entry, several ornate details catch the eye. The first is the collection of emblems affixed above the living room window. Kim and her team worked from photos to painstakingly re-create and position the appliqués.“This is as exact as we think we could make them, given the information we had,” Kim says.
The porch light, with filigreed ironwork scrolls, underwent a similar process. Lighting specialist Jim Gibson created a design from the photos and then meticulously handcrafted the fixture. Walking through the original front door into a warm beige foyer, visitors could be forgiven for overlooking some of the smallest historical elements. “The door has square screw heads!” Thomas enthuses. “Something only an owner could love,” Kim notes, before adding, “or an architect.”

Kim replaced the windows on the south wall with sets rescued from the kitchen’s demolition. The built-in cabinetry on one side was shifted to the south wall, and the arched doorway to the kitchen likewise shifted. Now oriented on a diagonal, the passage opens up scenes of the airport, bay and beyond to even the farthest reaches of the home. Some of the most dramatic changes took place in the kitchen. To enlarge the space, Jacob removed a secondary staircase, a vestige of the home’s early days when domestic help was employed. An icebox came out to make way for cabinetry and a technology hub. A new island provides a prep area, as well as counter seating where the twins can hang out. Personal touches mark the kitchen on all planes. Behind the range, a backsplash of tiles made by an Encinitas artist features earthy colors to match the fireplace. The stamped-tin ceiling, for which Thomas lobbied, is not original to the house but is an architectural detail in other buildings from the period. Kim designed gothic, arched, glass cabinet doors that recall leaded-glass windows elsewhere in the home. 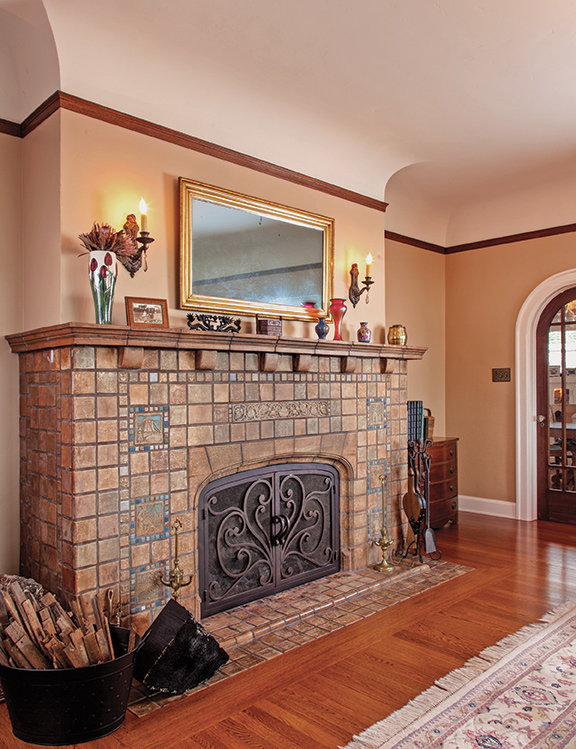 The formal dining room sparkles under an original chandelier (restored by Jim Gibson), whose colorful crystal pendants depict fruit. Built-in cabinetry in rich wood was restored, as were doors to the foyer. Crafted in mahogany, as the originals were, the system has two folding panels on one side and a single panel on the other. A trip through the foyer takes guests toward the north side of the house, to a powder room and guest bedroom suite. The powder room features the original highboy toilet, but Kim created a cove ceiling with a tray to heighten the small space.
The guest bedroom’s transformation included substantial “undoing.” A heating stove and security bars on the windows were removed. A restored frieze encircles the spacious room. The paintings depict pastoral scenes from northern European farm life. Interior designer Elizabeth Barkett designed the guest bathroom with an eye toward accessibility, incorporating a wide doorway and a walk-in shower. Back toward the entry sits a grand staircase, the balustrade of which is singled Trophy animal skins and oriental rugs visible in historical photos of the living room are long gone. Today, visitors can study the ornate scenes depicted in the fireplace tiles or turn their attention to the view. 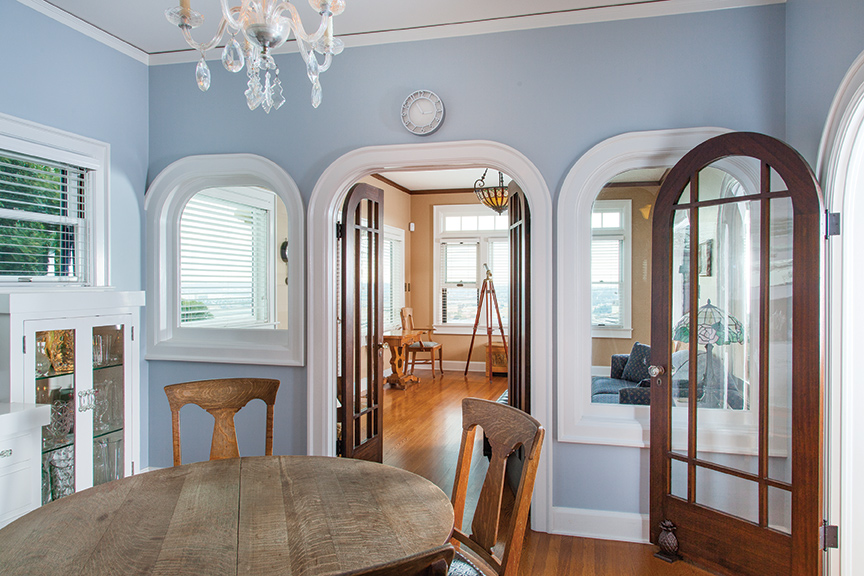 “The Batchelder-tile fireplace was one of the largest consulting historian Ron May had ever seen in a San Diego residence,” Kim says. While every space seems optimized to take advantage of the panorama outside, a seating area near the largest window is exceptionally suitable. An informal sitting room once was divided into separate spaces. One housed an aviary; the other, orchids. Kim and Jacob opened up and simplified those divisions, but kept the interior windows, allowing light into the back of the house while maintaining views. “We took out a number of arched wooden openings, and Jacob saved them,” Kim says.
“We reused everything,” Jacob adds. Frosty, pale blue walls signal that you’ve entered another zone. A breakfast nook lies beyond a pair of mahogany French doors. 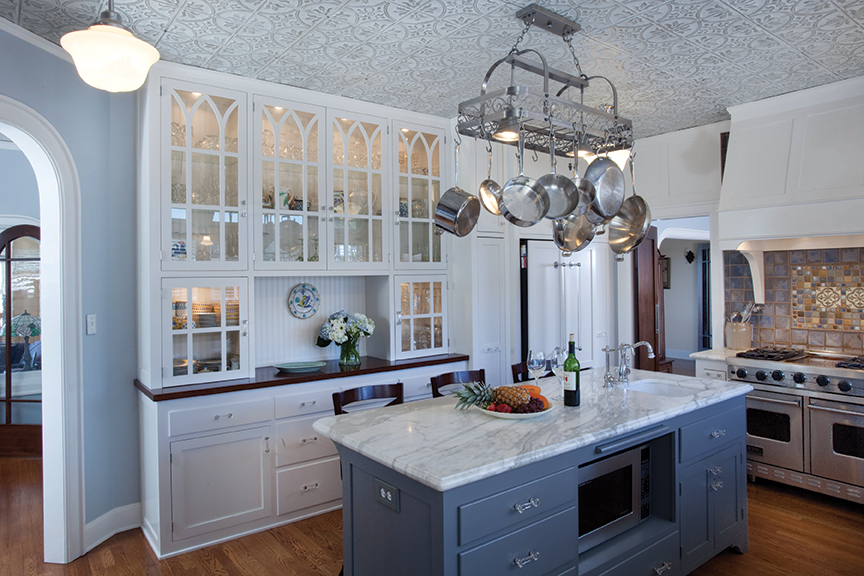 out in the 2011 historic designation from the City of San Diego. Creamy beige walls, replacing the hall’s busy, floral wallpaper, let the eye rest on details of restored stained-glass windows. Foremost among them is one depicting a schooner. Photos reveal that the ship has flipped and flopped several times, with the bow pointing north or south. Jacob posits that the window was removed for painting or repairs. The landing is home to a hangout space opening to the twins’ bedrooms and shared bathroom. Kim and Jacob retained many original elements: built-in cabinetry, tiles in the upper third of the shower (with particularly well-matched replacements in the lower two-thirds) and the shower door. New are floor tiles and two pedestal sinks. Seeking to avoid sibling rivalries, one of the two smaller bedrooms was expanded. Making them match wasn’t as simple as just pushing a wall out; the scale of various elements was affected. “We went around and around with the window builder to get them just right,” Jacob says. Reminders of the home’s history include a pass-through used by servants when they needed to remain unseen. Though it’s tucked away in her closet, the teen girl still clearly gets a kick out of it. Half of what is the master bath had been servants’ living quarters. The grand space includes a steam shower, his-and-hers vanities, a step up to a gleaming tub and a huge, fan-shaped window. Cabinetry trim was designed to match that of the restored front windows. Recalling a visit to London’s Park Lane Hotel, Thomas and Mary opted for oversize marble tiles underfoot. 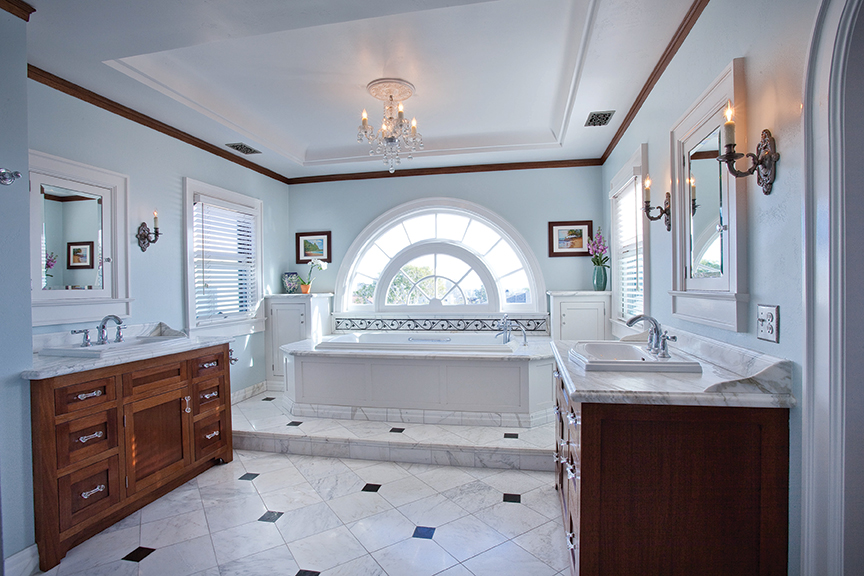 The master bedroom remains mostly unchanged from the original design. However, it opens to what might be the home’s biggest transformation: a new master study. In the 1940s, a patio off of the bedroom had been converted into a shed-roofed sleeping porch. Kim’s design called for the space to be rebuilt with a flat roof, topped by detailed corners that match the rest of the home. “One of the requirements [of the city’s Historical Resources Board] was to make the windows simpler than the original multipane windows,” Kim says. The board aims to ensure that newer construction is identifiable, so viewers can tell where historic elements end and alterations begin. Over the years, the garage had been expanded. Kim’s design reduced its square footage to match the original footprint. Renovation of the “chauffeur” apartment upstairs included use of a window frame salvaged from the guest bedroom. Exterior stairs and trellises were stripped away, and an expanse of back yard began to take shape. Adjacent to the garage, a kitchen prep area features a built-in grill and fireplace, both surrounded by handcrafted Mexican tile. A pergola provides shade by day and built-in lighting by night. A wall fountain with colorfully patterned, geometric tiles offers gentle aquatic sounds. The back yard gave Thomas, Mary, Kim and Jacob a chance to get creative. The homeowners knew they wanted a swimming pool, so Jacob tasked them with “test-driving” pools and hot tubs and reporting back about precisely what they wanted. Simple terra cotta surrounds the 37-foot-by-17-foot pool with cobalt blue trim. Thomas surmises that his family uses the pool three-quarters of the year, as the back yard has become their outdoor family room. “When the HRB finally started walking through the home, it was really validating,” Jacob says. “They were so satisfied with the effort we put into it.”
The meticulous effort paid off: The home was honored last May with the HRB’s Historic Preservation Award for Architectural Rehabilitation.