Legend in the Making

Before winding down his career as a custom-home builder, Tom Durler wanted to build one last residence. It would replace the multistory Mission Hills home that he and his wife, Berit, lived in for 23 years with a single-level home and garden in the style of Frank Lloyd Wright. “We wanted our own mini-Fallingwater,” Berit says, recalling their visit to the legendary architect’s masterwork that is cantilevered above a thundering stream in the southeastern Pennsylvania woods. “We love Wright’s open, flowing floor plans, his blurring of indoors and outdoors, the harmony with nature.” 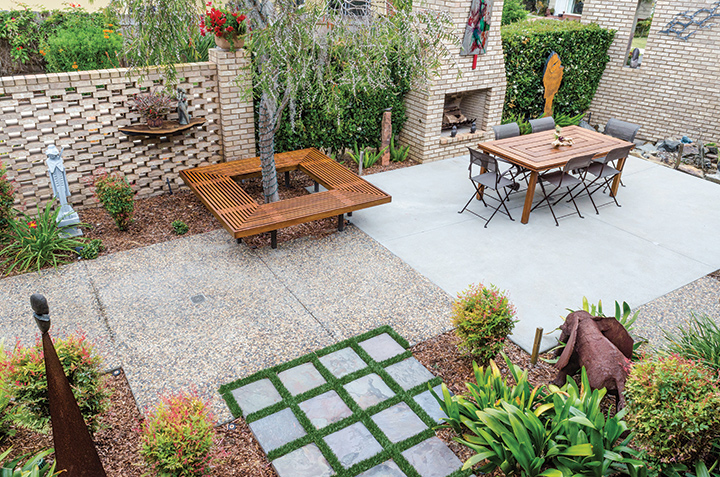 In December 2004, during “one of the wettest winters ever,” Berit says, the couple broke ground on a 1/3-acre Point Loma lot that for years had been a neighbor’s garden. Flooding forced Tom to redig the footings seven times, and trees they had hoped to save toppled. Seventeen months later, they moved into their gently cantilevered, hillside home clad in creamy white bricks that echo classic Wright façades. Walls of windows open two sides of the low-slung home to an intimate courtyard and city-light vistas glimpsed through boughs of a 70-year-old towering pine. 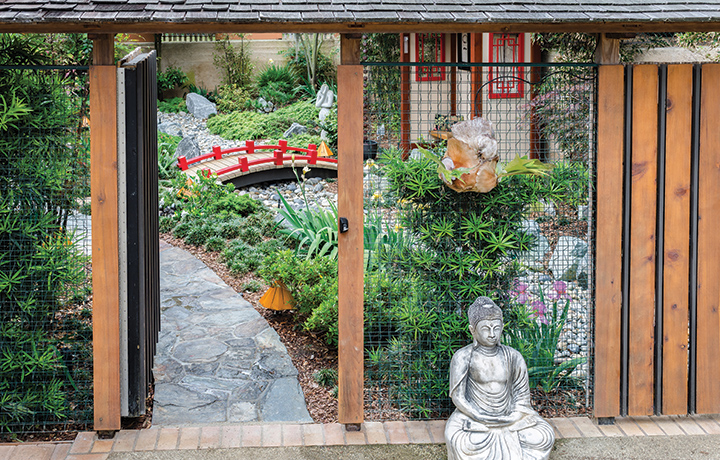 Outside the front door, a pond spills water down a rock-strewn streambed past stacked-stone retaining walls from the former garden before splashing into a second pond near street level. The slope’s ornamental grasses and groundcovers are ideal “grazing” for a pair of playful horse sculptures by Temecula artist Ricardo Breceda, part of the couple’s extensive art collection.  Nearby, a kinetic tandem bicycle by Coronado artist Amos Robinson whirs in sea breezes that also ruffle jaunty birds of paradise rescued during construction to line part of the home’s long driveway. Near its crest, beds that were once a tangle of ivy showcase sculptural succulents, including a lanky alluaudia. A longtime trustee and former chair of the Zoological Society of San Diego, Berit first saw this Madagascar native at the San Diego Zoo. 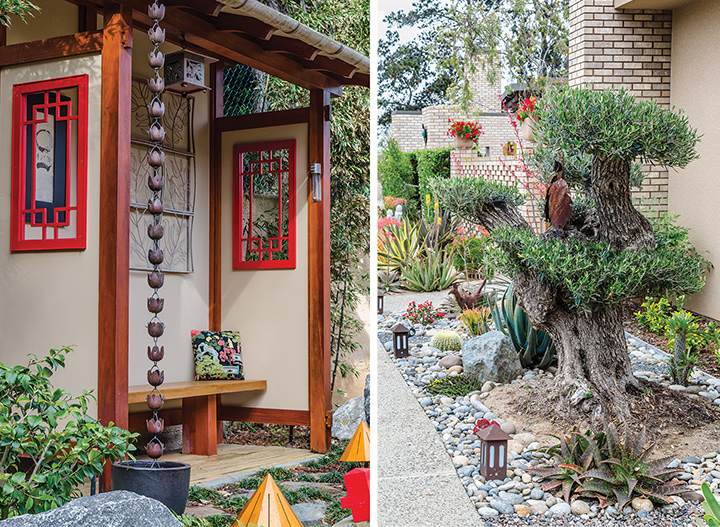 Outside Tom’s shop is the border’s most recent addition: a century-old, gnarled olive tree. Spotted in a display garden at last year’s Spring Home/Garden Show at the Del Mar Fairgrounds, it was settled into the garden with the help of a crane. Steps away, past a small rose garden, 10 staghorn ferns — gifts from a friend — march across a retaining wall at the property’s edge. 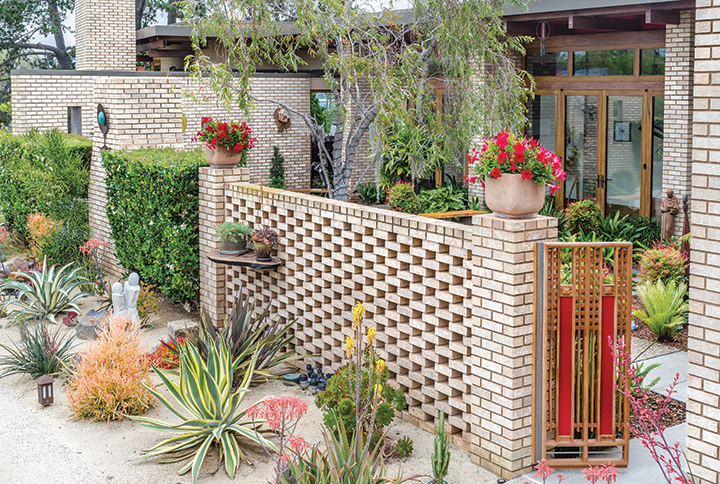 A cherry red mandevilla atop a brick pillar heralds a courtyard entrance with a wood gate crafted by Tom and accented with “Wright red.” A dining table, benches and wood seating around a lacy peppermint tree also are his creations. Three basalt columns burble water into a shallow basin. Nearby, a fireplace chases the chill when the couple breakfasts here after their morning walk. A mini-menagerie — including a metal elephant by an African artist exhibited at the zoo — lurks among clivia, azaleas, philodendrons and other greenery. Other artwork includes an abstract painting on metal by San Diego artist Michael Leaf that adorns the fireplace and a gleaming white “sprite” sculpture designed for one of Frank Lloyd Wright’s early Chicago projects. The replica was a housewarming gift. 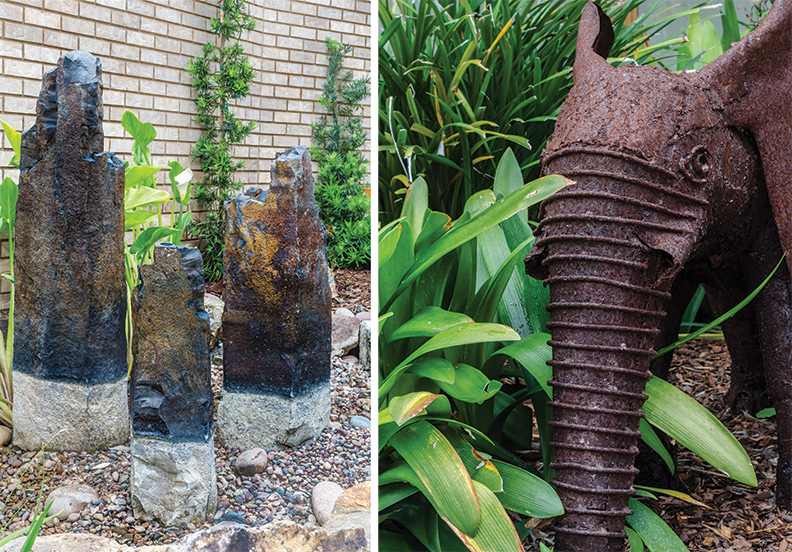 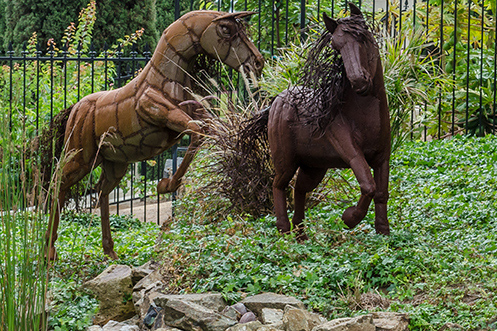 Five years ago, Tom and Berit replaced weedy turf at the rear of the home with a second, enclosed garden that enchanted hundreds of visitors on last spring’s Point Loma Garden Walk. Minded by a meditating Buddha, the elegant Japanese garden complements the architecture and reflects Asian influences evident in Wright designs.“We love the calming feeling of these gardens,” Berit says. Tom’s woodworking expertise shines here too: in the garden’s diminutive teahouse; an arched bridge; path lighting; hand-tied bamboo fencing; and imposing gates, including a torii gate with thick, peeled-log columns. Japanese lanterns nestle near a dry streambed surrounded by bamboo, mondo grass, lavender and yellow iris, white azaleas and sculptured black pines trained with the help of plantsman Michael Letzring.
When the couple aren’t traveling, volunteering or entertaining, Tom often works in his shop for up to 40 hours a week. Berit smiles knowingly, pointing to a Ralph Waldo Emerson quote prominently displayed on a stand Tom built. It reads, “A man builds a fine house; and now he has a master, and a task for life; he is to furnish, watch, show it, and keep it in repair the rest of his days.” “That describes my talented husband.”