Heading out for a night on the town or setting up a home dinner party with your vegan friends should be easy when it comes to drinks, right? Not so fast. Wine, spirits and beer may be filtered with animal products. Fortunately for you, San Diego offers locally made alternatives. Eagles Nest Winery grows grapes organically in Ramona Valley following sustainable farming practices. All its wines are unfiltered and unfined. Vintner Dennis Grimes explains that he uses a racking method to clarify the wine. “You have the wine in containers or barrels and you have a low-speed pump,” Dennis explains. “You put a rack tube into the barrel and hold it above the lees [sediment that settles at the bottom] and carefully pump off the wine into another sanitized barrel. You do that three or four times.” When it comes to spirits, the U.S. Food and Drug Administration states that distillation removes gluten, but some celiac disease sufferers have reported experiencing negative effects from drinking grain-based vodkas versus those made with potatoes, grapes or corn.
San Diego distiller Kill Devil Spirit Co.s’ RX Unfiltered Vodka and Valor West Coast Gin are naturally vegan and gluten free. Its Ugly California Moonshine and Ugly California Rise & Shine are distilled six times from barley, rendering them virtually gluten free. Kill Devil uses botanicals and locally sourced, alkaline water and works in small batches. 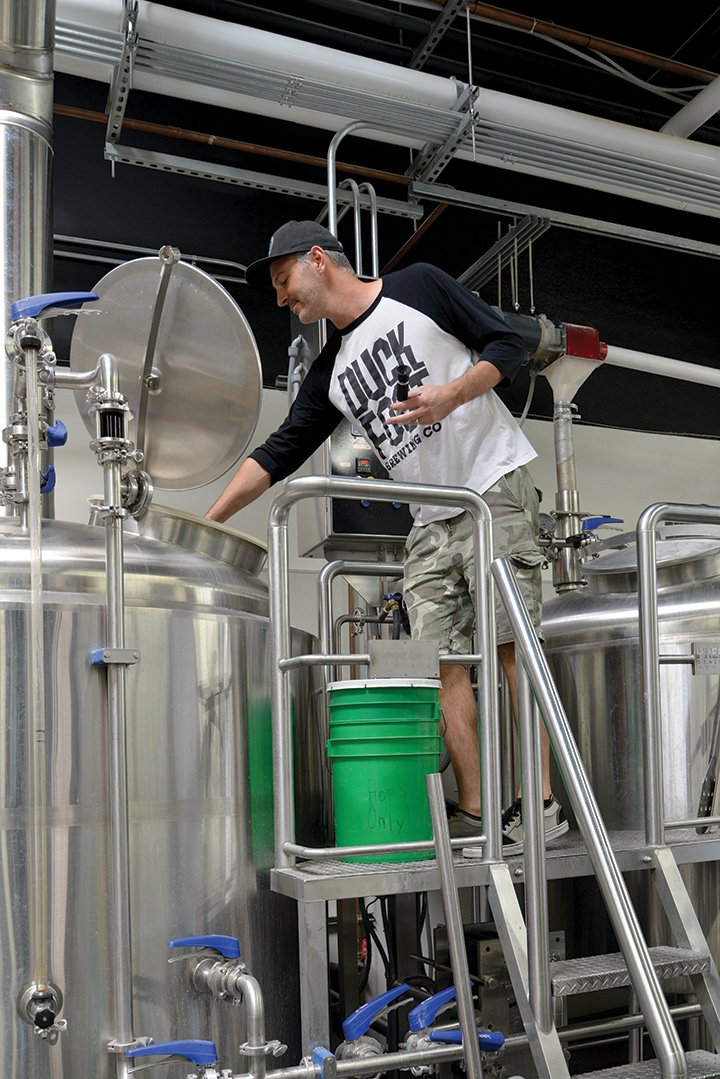 As with wine, beers often undergo filtering with gelatin, isinglass, casein or animal-based glycerol, making them off-limits for vegans. They also can be on the no-no list for the gluten-intolerant, because barley, wheat and rye are popular base components. Gluten-free beers can be made from buckwheat, corn, millet, rice and sorghum. But some local brewers have found another pathway: by adding an enzyme called Clarity-Ferm from San Diego-based White Labs. At Duck Foot Brewing Co.’s Miramar tasting room, every tap features gluten-free and mostly vegan options. (California Honey Ale is not vegan.)
“We make our beer in the normal way with wheat, barley and rye; and then we add the enzyme that slices up the gluten protein and makes it unidentifiable to the autoimmune system,” explains Duck Foot founder Matt DelVecchio. A one-time home brewer, Matt discovered that he had celiac disease while building the business plan for his craft brewery. “I was forced to try all the gluten-free beers out there,” he says. “Sorghum-, rice- and corn-based beers taste like fermented products, but they don’t taste like beer.” Then he tried an enzyme-treated beer, Omission, made by Portland-headquartered Craft Brew Alliance.
“It actually tasted like beer,” Matt says. But, he adds, they only made a pale ale and lager and he “didn’t want to be stuck drinking one company’s pale ale and lager” when there are so many beer styles he appreciates. That led him to create a range of gluten-free beers at Duck Foot. The FDA considers consumables gluten-free if they contain less than 20 parts per million. According to Matt, Independent testing of Duck Foot beers reveal they all fall below 10 parts per million in gluten content. “No one wears a badge saying they’re gluten intolerant, but I know that hundreds of gluten-free people have been into Duck Foot,” he says. “I offer my phone number if they’re concerned about effects. No one has ever called. They usually return.”