AFTER A WILDFIRE, A RAMONA PROPERTY OWNER REBUILDS TO LEED PLATINUM STATUS AND NAMES HER HOME FOR GOLDEN EAGLES

The Witch Creek wildfire of 2007 burned Amy McQuillan’s rural Ramona neighborhood to the ground, but it seared into her a desire to rebuild something more sustainable and mindful of its natural habitat. While some neighbors moved away, Amy rebuilt on her land and then bought the neighboring hilltop property with views of the Cleveland National Forest and San Pasqual Valley. “I thought I could do it better and learn from the lessons of that fire,” she says. “I just love it out here. It has this amazing feeling of being close to nature.” Alongside her partner, Pete Beauregard, Amy enlisted Andrew Wilt Designs and Alliance Green Builders to create her certified LEED Platinum home. Called Casa Aguila, the residence is named for the golden eagles that circle over the property. 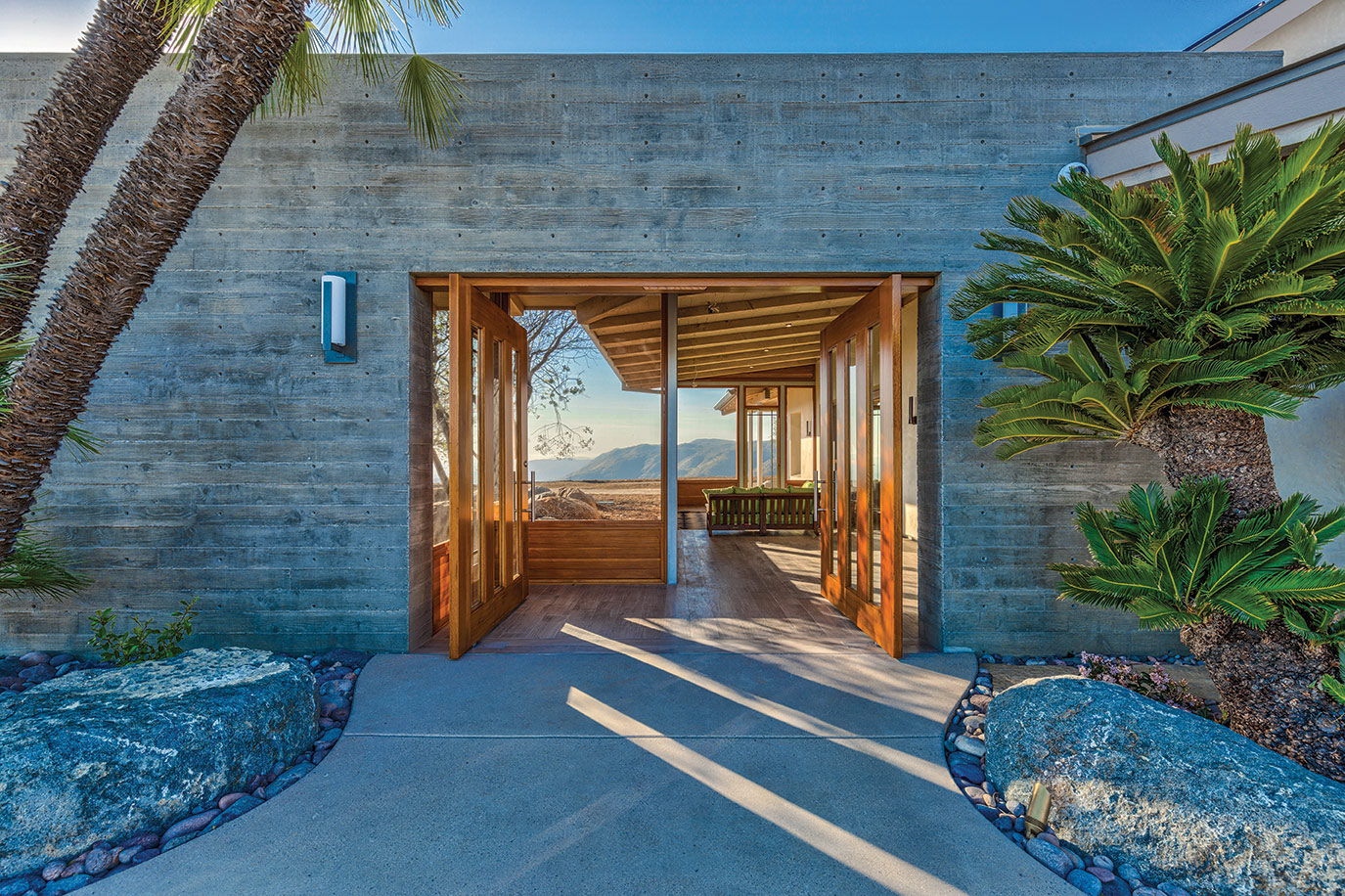 The 3,123-square-foot home is the first truly passive house in the San Diego region. “It’s like LEED on steroids,” says Alliance Green Builders President Jeff Adams. The Encinitas-based company sought to use the most energy-efficient materials on the market, while harnessing the power of the wind and the availability of rainwater and sunshine. The home became a case study for those involved in its creation, resulting in partnership deals that reduced costs. One of the home’s most self-sufficient attributes is its use and reuse of water. Casa Aguila was granted the first permit in San Diego County for residential, on-site wastewater treatment, with all wastewater used to irrigate fruit trees and other plants on the property. Storm water collected from ground drains also helps provide irrigation, while rainwater collected from the roof is used indoors. Eight 10,000-gallon tanks store all the captured water. 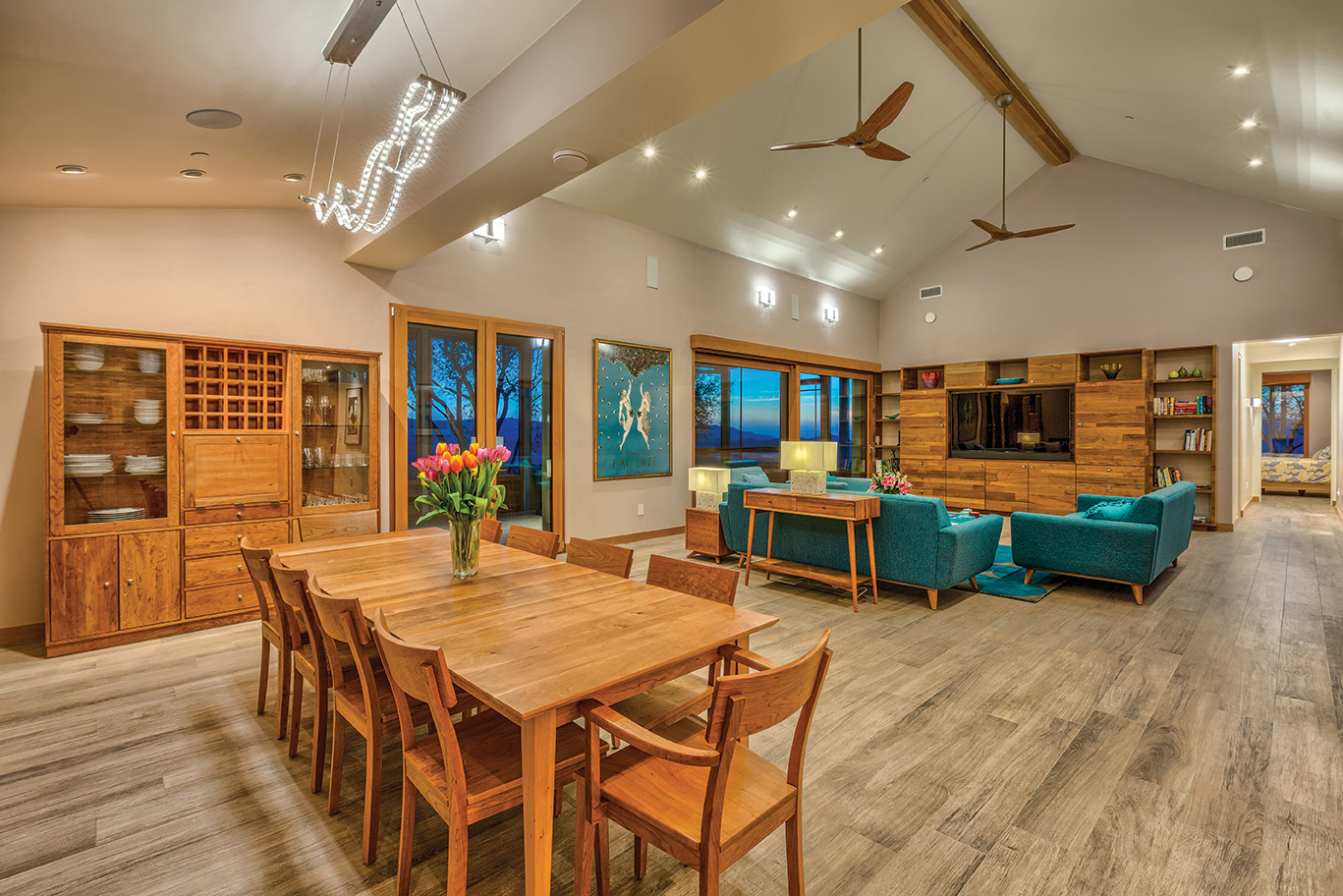 While Ramona is known for desert-like weather, it’s a misconception that the area doesn’t get enough water to be useful. During one storm, Casa Aguila’s rainwater-collection system gained 30,000 gallons of water over a two-day period, Pete says. Energy for the home is generated by a wind turbine, with 17-foot blades, that sits like a gleaming modern sculpture on a hillside above the home and by three dual-axis solar-tracking systems, each with 24 photovoltaic panels. The trackers follow the sun throughout the day, achieving some 40 percent more energy production than traditional panels, according to Alliance Green Builders Vice President Rich Williams. Today, Amy’s home uses the electric grid only for backup energy. Jeff and Rich claim that it will go off the electric grid altogether when Tesla batteries come to market.
Casa Aguila puts its renewable energy to good use heating and cooling water, ventilating air, powering energy-efficient appliances, automating everything from the window shades to the thermostat, and monitoring how the home uses and generates energy. From a Creston panel in the kitchen, Amy and Pete can watch and control how efficiently the home works. They also receive a weekly diagnostic email. “It tells you what’s happening in real time so that you can see where you are using energy,” Amy says. “Energy monitoring has a commercial basis that’s been used in the past, but residential is fairly new. Doing it the way that we’re doing it is almost unheard of.” Casa Aguila’s smart design includes several tucked-away places for its “brains.”  Racks of electronic monitoring components are stowed in the attic, a poolside closet and the garage, where the couple also keep their Tesla and Chevrolet Volt electric cars. 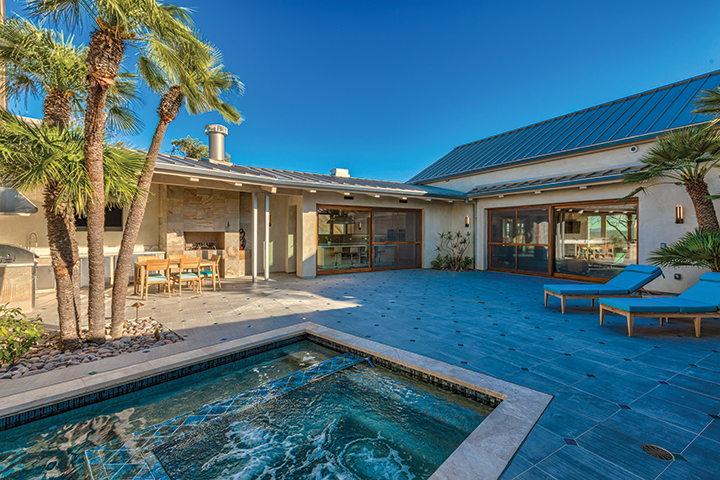 Creating a passive home meant incorporating energy-efficient construction materials and sophisticated insulation into the design. Double-stud walls were filled with about 16 inches of blown-in GreenFiber cellulose, while the roof includes 5.5 inches of GreenFiber insulation and 6.5-inch-thick insulated panels. T riplepaned windows feature a laminated outer layer that makes them essentially “bulletproof” against high-powered winds like those seen during wildfire-prone Santa Ana weather, Jeff says. “There’s no such thing as a fireproof house, but we’re hoping the windows will help keep it from burning down,” Amy says. “We want to be prepared for whatever might happen, including the effects of climate change, but also to make a contribution by having a house that’s using less water and energy.”
When making design choices, Amy and Pete considered aesthetics as well as sustainability. The L-shape configuration of the home was more challenging to make energy efficient than if it were squared off, but they preferred the courtyard concept by architect Andrew W ilt. 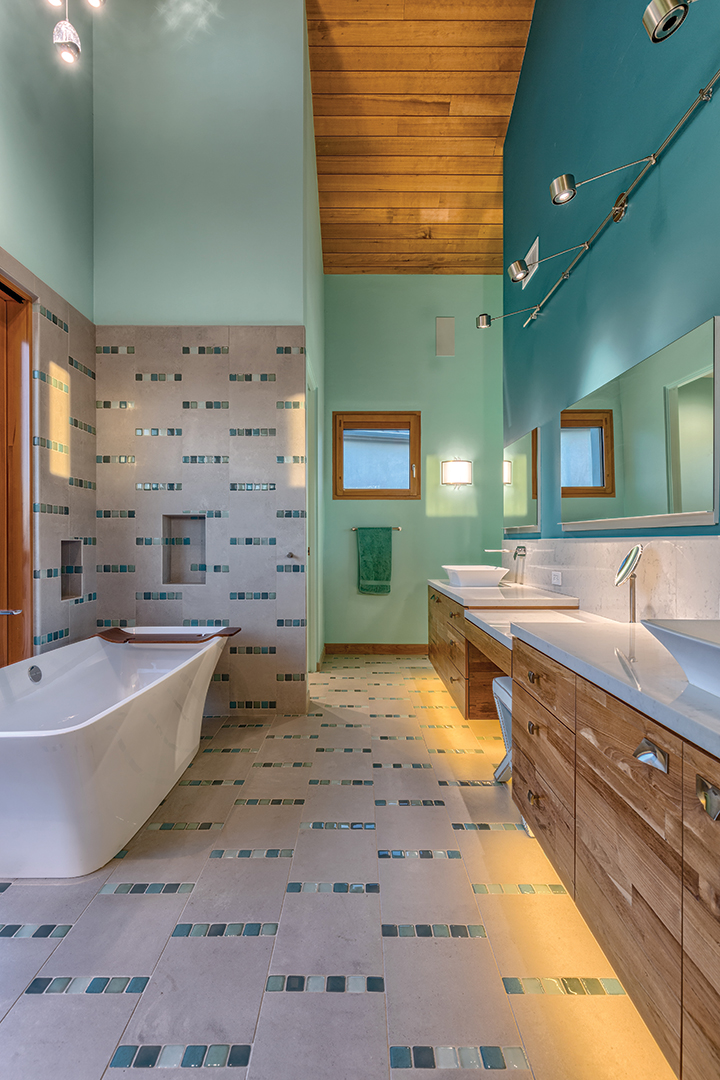 They opted to keep the interior design of the four-bedroom, five-bath home minimal, with nature-inspired shades of blue and green and lots of wood-grain texture, including a teak barn door between the dining room and kitchen. And they chose surfaces based on durability and sustainability. Eco by Cosentino countertops are made of recycled materials — including mirror, glass and vitrified ash — through a manufacturing process that uses mostly recycled water. Cabinetry is certified as sustainably grown and harvested wood, with maple cabinet boxes faced in quarter-sawn ash. Wood-grain porcelain floors throughout the home prevent pollutants that collect in carpet. Bedrooms are de-emphasized in favor of larger common areas, but feel spacious because of high ceilings, Amy says. High-efficiency fans help circulate air in the bedrooms and living room. Lighting inside and out is LED, including in the linear suspension over the dining table that mimics ocean waves. 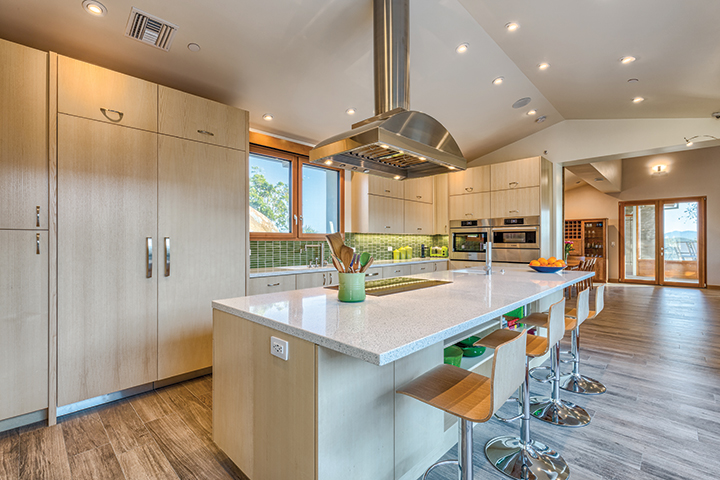 Artwork and furnishings in the Mid-century Modern-style that Amy likes fill the home. Outdoor spaces include a pétanque court, a horseshoe pit, and a reflexology labyrinth with a big chunk of rose quartz at its center. “I wanted to be on the cutting edge of sustainable building. That ended up going in a lot of directions,” Amy says. The property proves that environmentally conscientious choices and beauty go hand in hand. Pete adds that this kind of sustainable concept can be calibrated to any budget or property size. “You can prepare for the future. You can make changes. You can build rooflines that collect water. It can happen on the smallest scale,” he says. “This is where the future is.”