A Nexus in Nature

A Ship In The Woods finds a home for art, science and cultural conversations

Scientific experimentation, videos projected across living room walls, live musical performances, synchronized swimmers in a back-yard pool and art installed amid tall trees in a forest. All those elements combined to create a backdrop for a public party when A Ship In The Woods reached a turning point in its sixth year of existence. “I was inspired to create a place that communicated a dialogue to challenge our world view without the pretense that often comes with museums or other institutions of learning,” co-founder R.J. Brooks says of the nonprofit’s genesis. He stumbled upon a Del Mar rental house whose owners planned to eventually demolish it and rebuild. Until that day arrived, R.J. and co-founder Dan Fauchier used the house for exhibitions, performances and artist-in-residence programs. “It became an inspiring place for people to engage in elevated dialogues about art and science,” R.J. says. “The nonprofit came from the simple gesture of inviting people into the home, and a community emerged mostly by word of mouth.” 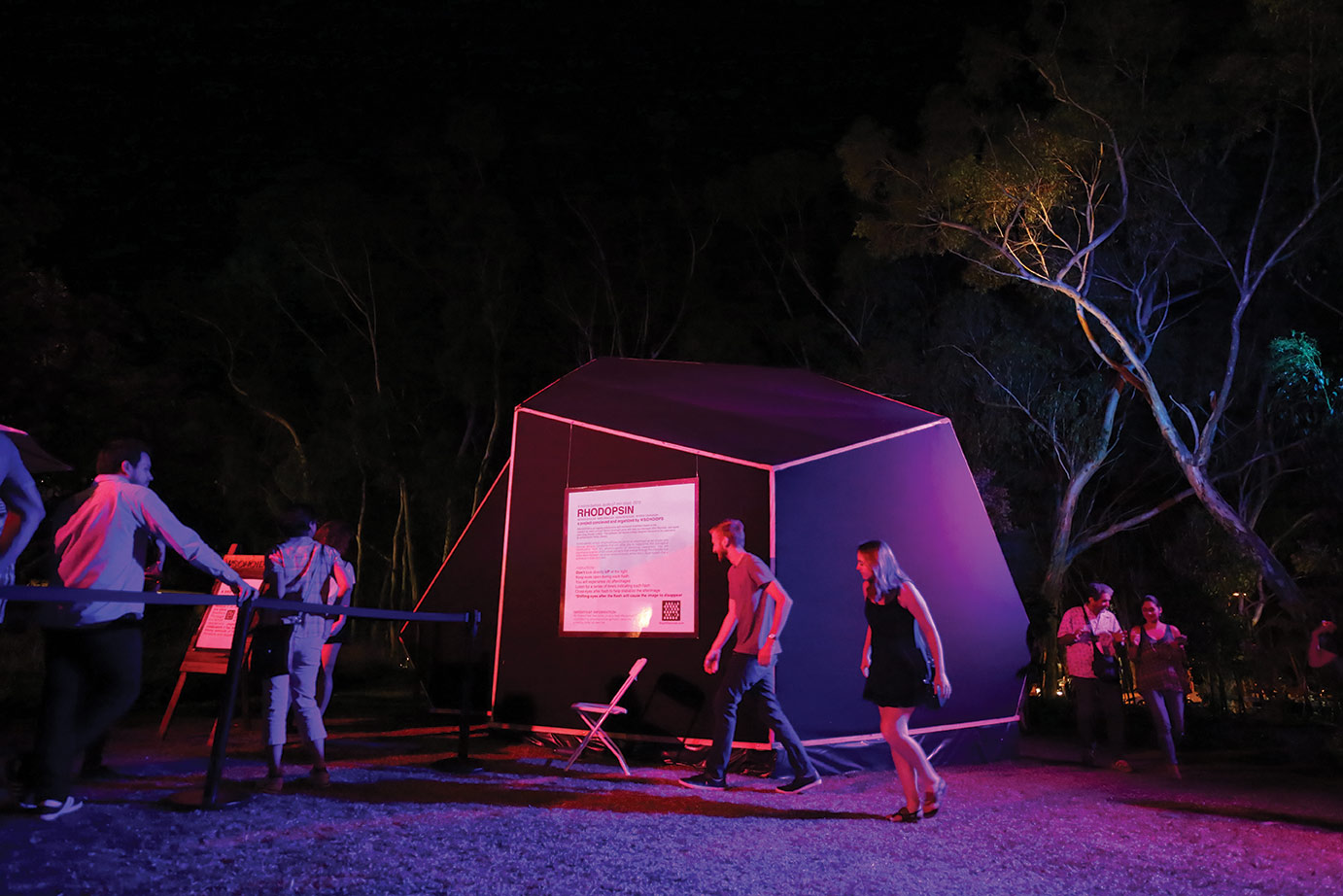 This year, Dan and R.J. purchased a 2-acre property adjacent to Felicita Park in Escondido; and in June, the aforementioned celebration took place at the 3,600-square-foot, mid-1950s house they renovated. “The house was in pristine condition for a nuclear family,” Dan says. “However, it needed changes for an arts and science organization.”They took the floor down to the concrete, removed non-load-bearing partitions, moved walls, installed track lighting and painted. Outside, they put in three miles of irrigation lines, reinforced walking bridges and installed lighting along pathways.R.J., Dan and Co-executive Director Lianne Thompson Mueller aim to present diverse programming that engages the community with local, national and international artists and scientists through house shows, satellite shows, residency programs and collaborative projects. Since its inception in 2010, Ship has hosted more than 80 innovative thinkers as part of its residency program. Last April, the organization welcomed an international collective called 1+1=3, sponsored by the Swedish Arts Council and Innovativ Kultur. Stephen Whitmarsh, a neuroscientist and member of 1+1=3, had attended a Ship event in Del Mar. R.J. visited him while in Paris last year and invited the collective to be the first artists-in-residence at the Escondido property.
“The friendships and dialogues that come from these connections are the main forces that keep the ship sailing,” R.J. says. One important component in the Ship’s repertoire is an immersive light and sound installation called Rhodopsin, which premiered at Art San Diego in 2014. Intended to challenge people’s ideas of perception, the project continues as a collaboration with Salk Institute neurobiologist John Reynolds, sound artist Greg Smaller and vision scientist Patrick Cavanagh. 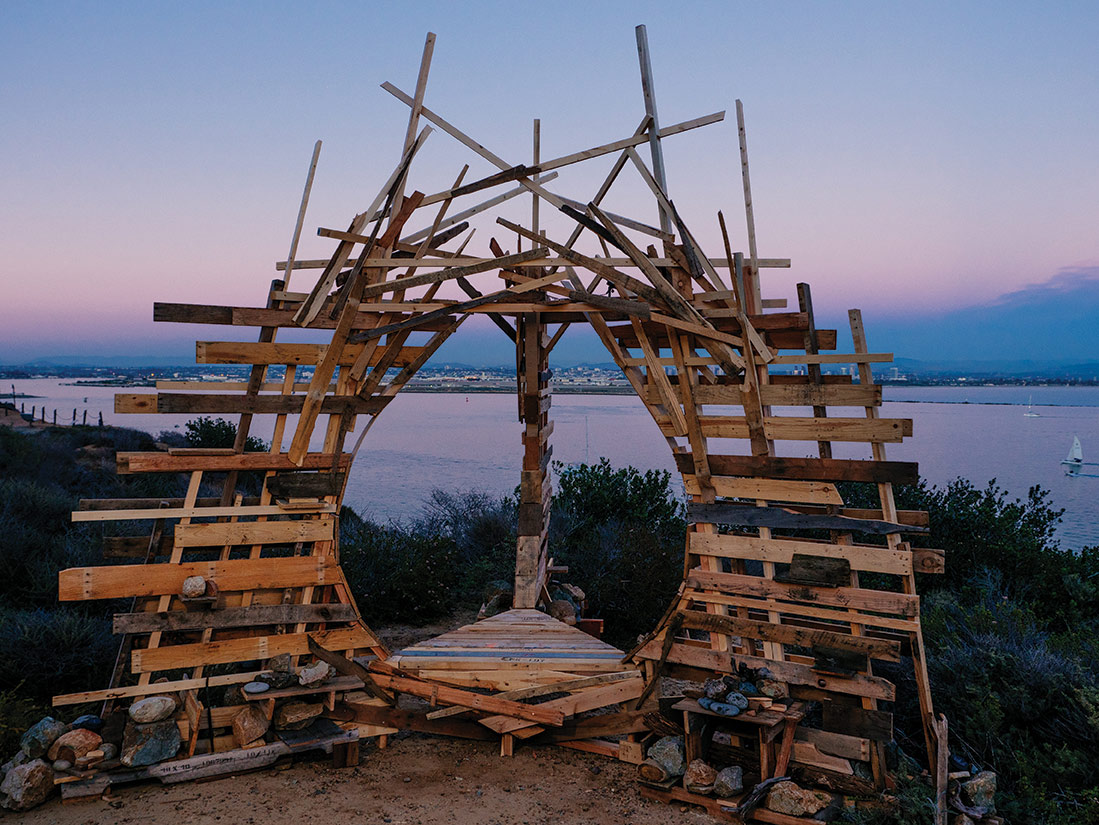 “This project emerged from a conversation I had with John, who crashed one of our events and introduced me to Patrick’s after-image experiments,” says R.J., adding that plans are underway to develop a permanent Rhodopsin installation at Ship’s new headquarters.With a stable home established, R.J., Dan and Lianne are working on plans to present four public events per year, formulating educational outreach programs, researching grants, seeking donations, building membership (a new program) and designing two structures on the woodlands acreage. One structure is a recording studio that also would serve as space for performances and artists-in-residence. R.J. and Dan are developing plans with individuals who helped design Rhodopsin when they were students at New School of Architecture and Design and since graduation have formed Paradox Urban Design Lab. The Paradox team also has designed a spherical space, 25 feet in diameter, for Rhodopsin and temporary art installations. “Rows of seating above the center floor will permit us to have in-the-round performances or project films on the white dome surface around and above the seating,” Dan says. “We are collaborating with technicians who work with 360-degree moviemaking equipment to assure the cabling, mounts and other hardware are designed into the structure from day one — sufficient for today’s technology and, to the degree that anyone can predict it, technology as it develops.” Dan describes the Ship as “a place designed for thinking and dedicated to intimate, multidisciplinary arts and science collaborations and educational outreach. “It feels,” he says, “like a family place where stimulating conversations can lift the soul.”