Striking architecture can be a blessing and a curse for an interior designer. The safe route might be to adhere strictly to the style and era of the building, lest the furnishings clash or detract from a look the homeowners already love. So it’s not really a surprise that the first designers vetted by homeowners Aaron and Lori Contorer suggested they appoint their newly acquired La Jolla townhome with stark, minimalist décor. The 3,345-square-foot home is one of six units within the 2007-built SIX by urban architecture firm Sebastian Mariscal Studio. The town-homes are a study in modernism: four-story boxes clad in stone and ipe wood, with floor-to-ceiling sliding glass walls and stainless steel decks positioned to take in views of the Pacific Ocean. “If I can put it this way, if you’re lucky enough to get an incredible, modern house designed by Sebastian Mariscal, you want the bones of the house to show. You want to keep that beautiful, straight-lined, minimalist, carefully edited effect,” Aaron says. “When we moved in, we thought that was a great background, but now we needed the foreground.” 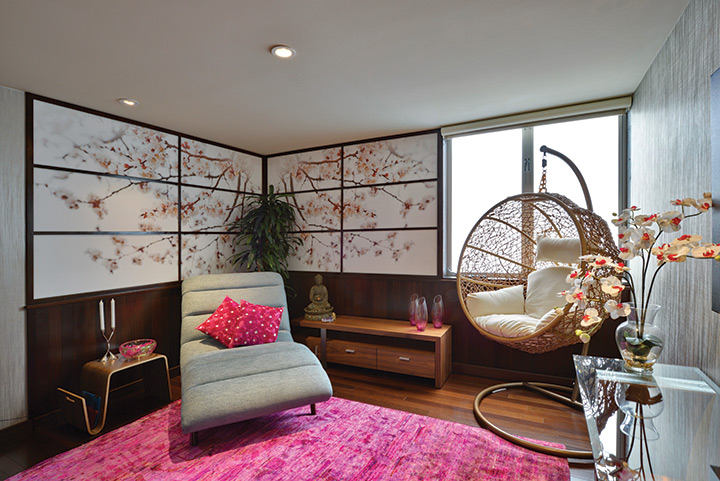 What the couple really wanted was to contrast the architecture with an inviting interior that “humanized” the space, Aaron says. Designer Michael Chambers was up for the task. “Respect for the architecture comes first,” Michael says. “Having a harmonious design aesthetic that blends with the natural elements and industrial elements that are combined in this house was the challenge.” Michael surmised from Aaron and Lori’s furniture and artwork a proclivity for bold colors. He also knew the home needed to suit their needs as a couple, as busy technology executives and as philanthropists who often entertain a crowd.
From there, he looked for design cues in the home’s distinctive architecture. What stood out to his eye were the angles and a gradation of light and color. “As the design process moved forward, we were always asking ourselves, ‘Is it angled? Is it gradated? Does it pop?’” he recalls. The representation of Michael’s vision is evident upon entering the home. He flip-flopped the original layout for the dining room and living room to give the seating area a better view of an updated, backlit media niche. As a result, the dining area makes the first design statement. The irregularly shaped glass top and walnut finished legs of Paolo Cappello’s Otto table were paired with Mid-century Modern-styled Morgan dining chairs, upholstered in a bold color called Klein Wheatgrass. Above, the Globo chandelier’s 16 handblown glass pendants sway in the ocean breeze when the sliding doors are open. 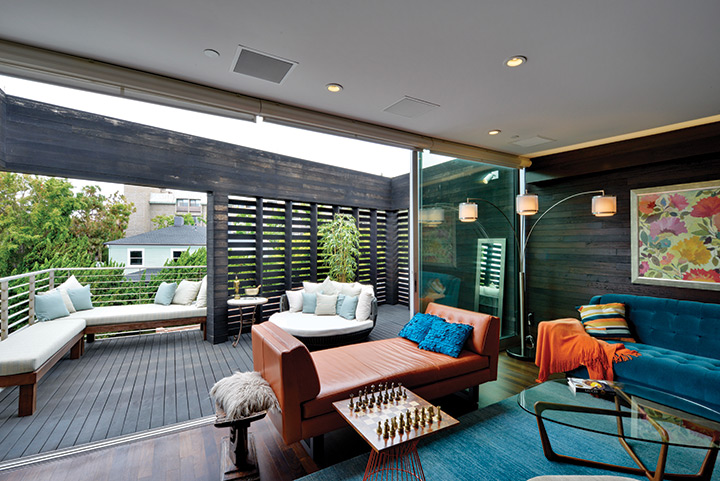 Lori admits the vivid hues and wild curves were a bit startling as each piece arrived. She even considered returning the purple-backed chairs. But once all the furnishings were arranged, the couple began to see how they harmonized and created a sense of movement. Their newfound appreciation for the color scheme inspired them to add two abstract paintings to their collection: similarly bright canvases by Santa Fe artist Brigitte Brüggemann. They are on the hunt for outdoor sculptures for the front and back patios to complement the rounded wicker Nest furniture. Beyond good looks, the spaces in the home needed to dually function as private areas and places to entertain. Michael created 30 feet of bench seating with storage in the open living/dining space by popping out the lower section of the limestone-paneled wall. The cushions can be arranged to make room for a buffet dinner or can serve as banquette seating for 15. 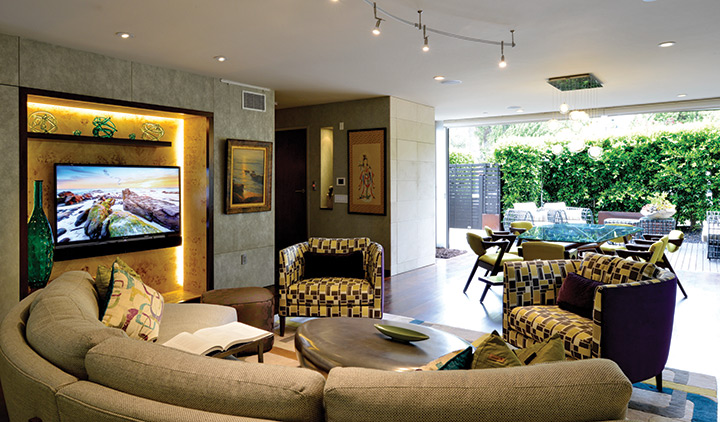 “It was important to us to have space that works in at least two ways,” Aaron says. “We wanted a place that’s lovely just for our day-to-day lives, because all you have is every day, as they say. We also wanted a place that could host fairly large parties.” A hidden entryway closet likewise was added by extending out the stone wall on the opposing side of the room, creating an effect that many visitors have mistaken as original to the property. Michael’s thesis in gradated color and versatility continues throughout the home. The top-floor master suite does double duty as a private retreat and as an entertainment space that Aaron and Lori refer to as the Sunset Lounge. By installing a ceiling-mounted track for curtains that bleed from taupe to spice, the couple can conceal their bed from guests who want to take in ocean views from the top deck. A television in a lift cabinet can be swiveled to face the bed or the deck. A three-dimensional installation of mahogany boards behind the master bed mimic the horizontal slats that wrap the balcony on the opposite side of the master suite (a design also picked up in bedside lamps). An inset of faux-leather wall tiles creates a “headboard” behind an underlit ledge of Lucite. Wallcoverings factored heavily into the home’s design. Michael used a range in texture and sheen from natural straw to metallic. In Aaron’s office, he affixed Stikwood planks to one wall. The recycled barn planks are digitally printed with a Mid-century Modern motif, a detail intended to accent the replica 1949 Protractor desk. For Lori’s Zen retreat (referred to as her “anti-office”), Michael customized and framed a wall mural of cherry blossoms. A hanging swing chair is both playful and relaxing, Lori says. 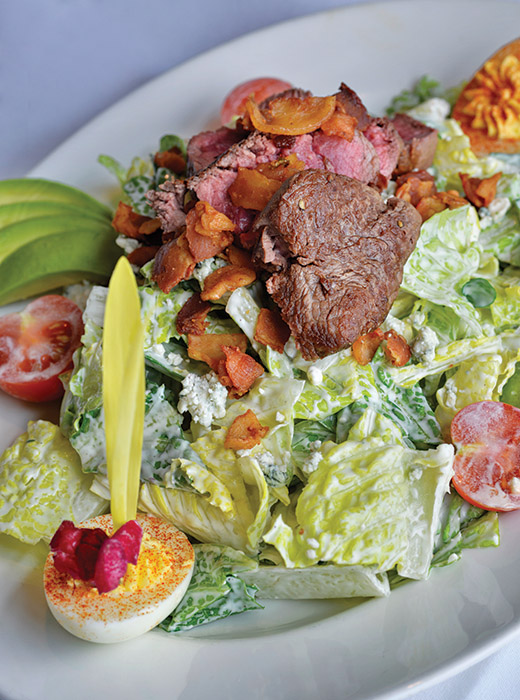 The couple expect their home to adapt to their varied needs as time goes by, simultaneously reflecting their individual wants and personalities. “It’s all facets of us, which is kind of fun,” Lori says.