Over a span of 28 years, Mike and Carol Kearney enjoyed watching the sun rise over San Diego Bay and views from their Coronado Shores condo. “Then we got this dog,” Carol says of Buddy, a 72-pound Staffordshire terrier mix. “As long as we lived in the Shores, we would not have a big dog, and we wanted a big dog,” Mike adds. There was another critical impetus for the couple’s purchase of a home overlooking Coronado Golf Course: Carol’s yearning for a garden. “I grew up in Michigan, where gardening was the saving grace that got you through winter,” she says, recalling the crocus that peeked through snow as a harbinger of spring. With a primary residence in the desert (Phoenix), she missed gardening.
Mike and Carol previously bought a small Craftsman home in Coronado Village, where Mike once found her tending the garden in drizzling rain with a 50-gallon trash bag over her head.  They sold the house because it proved too small to suit their lifestyle and bought their current property even though its two-story house had fallen into disrepair. “It was old and crazy — renovated so many times,” Carol says. “It was white stucco with funny appendages.” “There was a bougainvillea, 12 inches in diameter, growing through the roof of a sunroom,” Mike adds. “The whole property was overgrown with trees.” 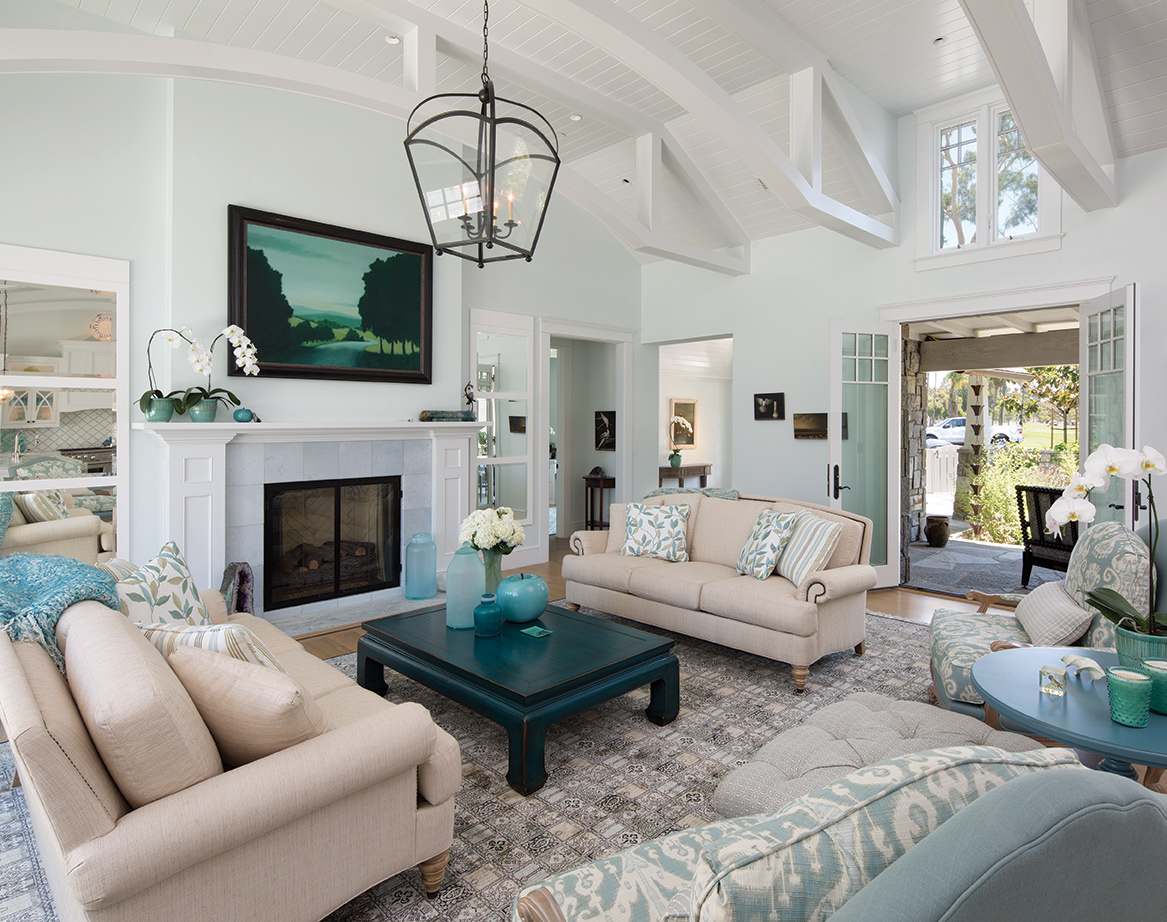 But for Mike and Carol, it had a strong selling point: a 12,600-square-foot lot. They interviewed three architects to help them build a new home, but it was almost a foregone conclusion that they would hire Dorothy Howard, who limits her work to Coronado. “Dorothy has done homes for friends of ours,” Carol says. “They have been delighted in the process and with the result.” “We initially met at the lot,” Dorothy says. “It was clear that, at least for Carol, it was entirely about the garden. The house was from the 1920s. It had gone through historical review and deemed to be not historic. Initially, Mike and Carol were convinced we should start from scratch because it was not, stylewise, anything they were interested in.”

But in the conceptual stages, they realized the structure was built well into current setback requirements, so it was deemed better to add to it than start from the ground up. “Most of what Carol found attractive were cottages, but that didn’t fit the spaces they needed,” Dorothy says. “You can’t just take a cottage plan and double it in size and have it look right. We went through a number of style ideas, everything from more French-looking to Craftsman — but not contemporary. I can’t hang any specific style on it. The steep-pitched roof is kind of French-looking. It’s an amalgam of part 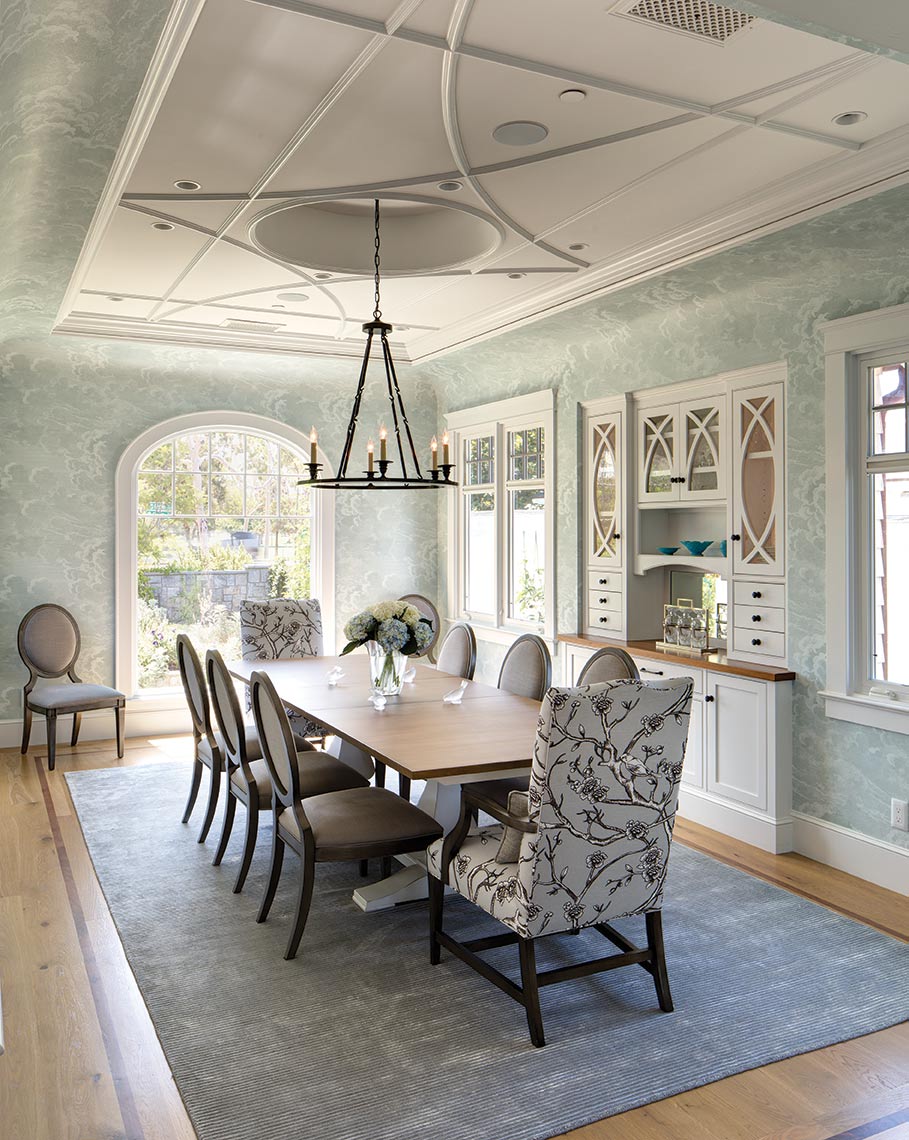 icular forms and materials that appealed to them.” The main level of the 4,000-square-foot home includes a great room, a walk-through butler’s pantry behind the kitchen, a dining room, a powder room, the master suite, laundry room and an office with its own bathroom. At the top of the stairs lie a space for yoga, two guest rooms and a bathroom. Architectural details, a successfully curated mix of patterns in textiles and stone, and a sophisticated collection of artwork keep the overall palette of aqua, turquoise and white from appearing homogenous. Despite the  high-end look of materials and furnishings, Carol states that she and Mike are “really casual people.”

As a case in point, Mike’s “dream spot” is a covered outdoor space — equipped with a fireplace and television but definitely relaxed in feel — visible from the great room through large glass doors. “Dorothy calls it a ‘California room,’” Carol says. When the couple has guests — including a rotating roster of family members — people congregate in the great room, which showcases one of the home’s architectural highlights: arched trusses across a white plank ceiling. “With the pitched roofline, we had an opportunity to get nice interior volumes, but I felt that a ceiling so high in a room that big would feel too cavernous,” Dorothy says. “I wanted to give Carol and Mike the volume that they are used to in their Arizona home, but simultaneously imply a human level. So I dropped in truss-like members to ‘bring the ceiling down.’ 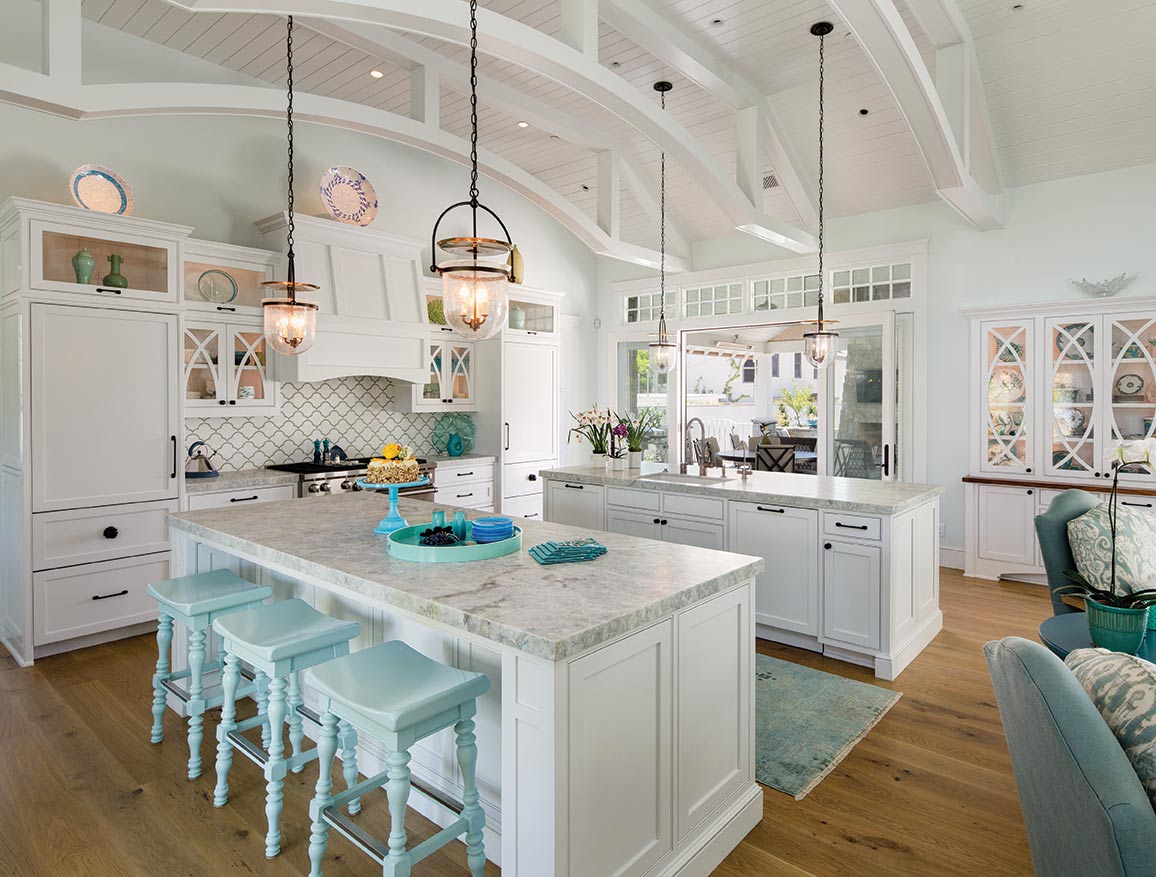 “Carol is very interested in decoration,” she continues. “The ceiling in her office has planks with cutwork; that was a detail they had in their small Coronado house. The detail in the dining room ceiling appliqué was a collaboration with their Arizona interior designer and Carol and me in terms of function — what we needed to make the design work with lighting and the shape of the room. I also riffed off the ceiling design with arching windows and used that soft curve with built-in cabinets in the living and dining rooms. The arch occurs in a number of different iterations, including a barrel-vaulted ceiling in the master bedroom. “Having a large lot seems like it offers endless possibilities,” Dorothy says. “But the hardest part of the project was figuring out how to get the size of house they needed and have it relate to the yard, where there would be vistas but also give them vignettes.” Beyond the backyard garden lies a 450-square-foot guesthouse that could be considered the cottage that Carol desired. Its charms include a Dutch-door entry, a kitchenette-like corner with display shelves, a sweetly appointed bedroom and a loft space reached by a set-in-place ladder. Mike, who runs an electrical contracting and communications company in Phoenix, designed the lighting and home automation layout and control. “I wanted to use LED lights wherever possible,” he says. “I found a company in the Midwest that manufactures a high-grade, commercial LED to achieve a museum effect for our artworks.” Carol designed garden spaces with help from landscape architect K. Chip Wilson. “I had a total vision for the garden, and then we got Chip,” she says. “It was such a delight to work with him.” 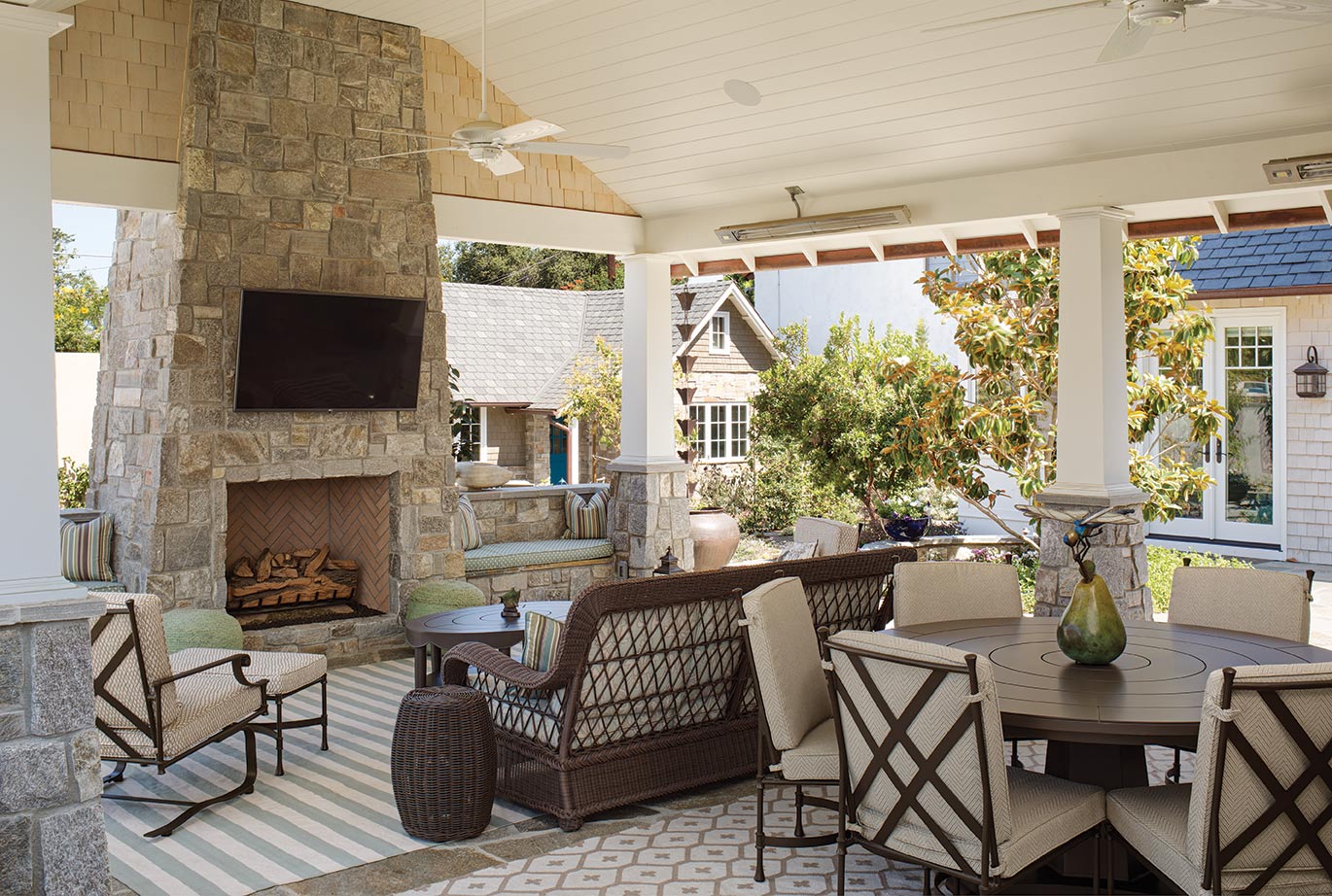 An impressive array of fruit trees includes cherry, pomegranate, persimmon, apple, orange, lemon, lime, kiwi, fig, pluot, mandarin and banana. “We have not seen any bananas yet, but our granddaughter wanted a banana tree,” Carol says. “We have a peach tree with four types of peaches that ripen at staggered times and another grafted tree with peach, apricot, nectarine and plum.” Rounding out the fruit selection are blackberries, raspberries and blueberries. Flowering trees include magnolia, jacaranda, crape myrtle, tabebuia and arbutus. “The arbutus is covered with blooms all the time,” Carol says. “The hummingbirds have a blast.” As if the aforementioned plants weren’t enough to perfume the air, the garden also features sage, rosemary, thyme, lavender and the fragrant blossoms of jasmine: Arabian, Madagascar, angel wing and star varieties. Stepping through the picket fence-style gate to enter the property, a visitor immediately notices butterflies flitting about and the unmistakable scent of Stephanotis floribunda (Madagascar jasmine).
Carol and Mike retain ownership of their Shores condominium, which they rent to friends of friends. “We’ll have it if the garden gets to be too much,” Carol says. But, as Mike would undoubtedly attest, that’s unlikely to happen for a very long time — especially when Carol’s attention to the garden could yield a bumper crop of bananas. 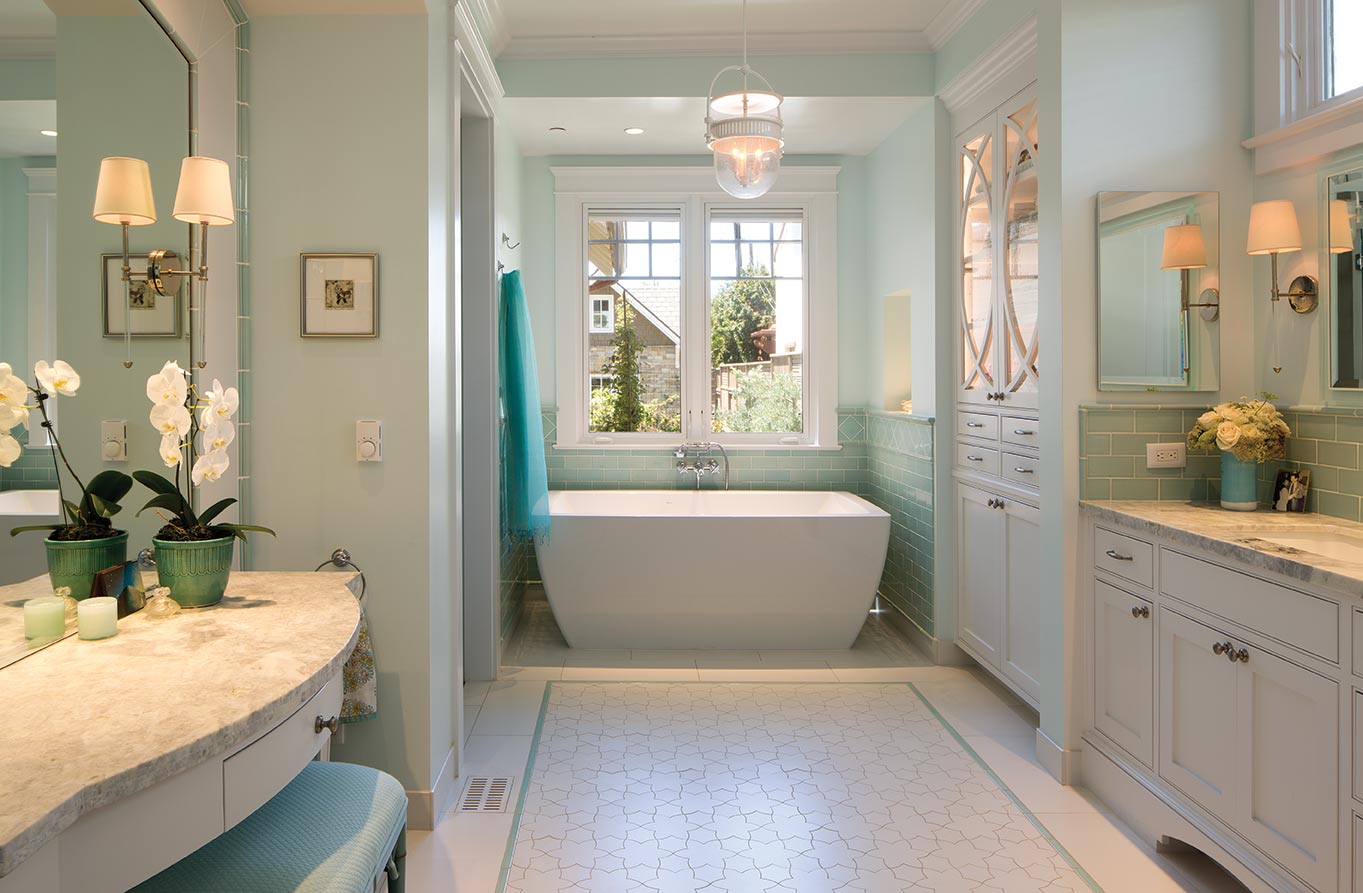